While I’ve only experienced a few hours exploring the luscious hillsides of Fallout 76’s West Virginia, I made it my mission to explore as much of the game’s extensive map as I could. It’s an impressive thing, four times the size of Fallout 4’s already expansive landscape, but the locale has all the personality and silly esoterica I’ve come to expect from Fallout games, mixed with the countryside I know all too well. (I grew up just next door in good ol’ Virginia proper.)

Since Bethesda announced that Fallout 76 wouldn’t have any human NPCs, with my first shaky steps out of the vault I set out to find what life (mechanical or otherwise) still scurried about the ruined Appalachia. Fallout’s critter designs have always been some of my favourites, and while I’ve regrettably yet to run into one of those adorable giant, mossy sloths you see briefly in the previews, I did discover my fair share of fauna. 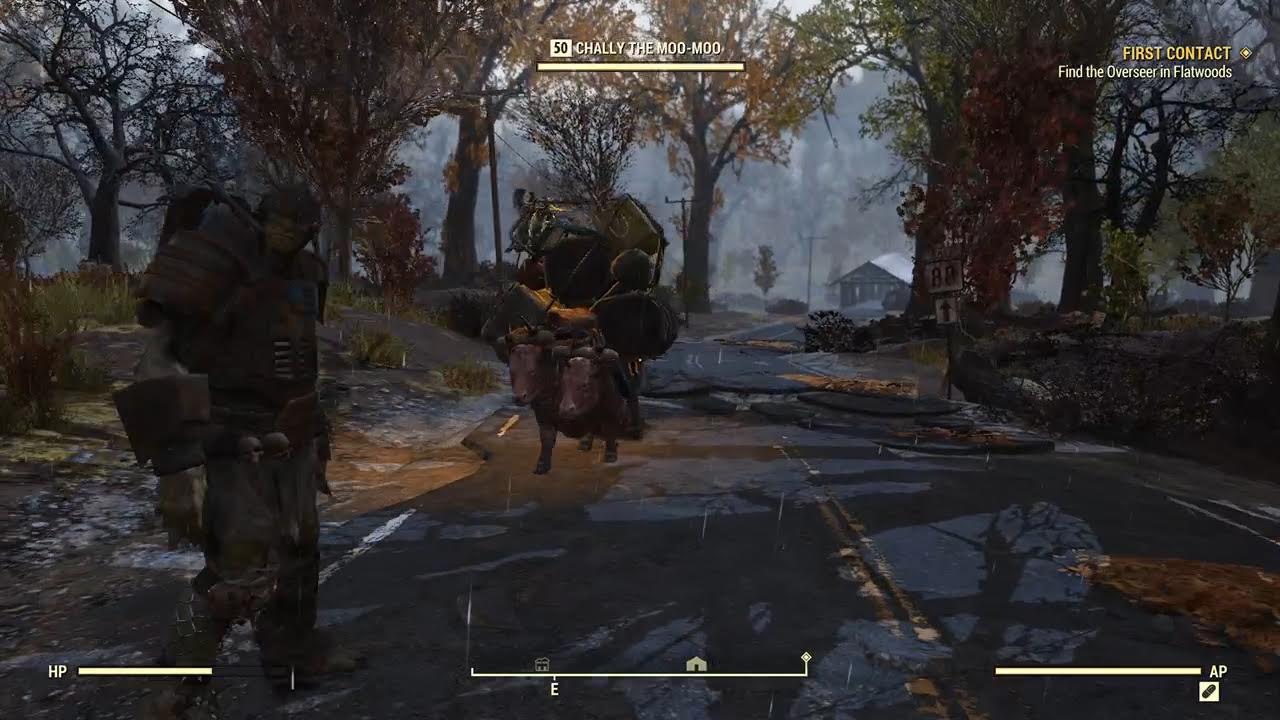 Sickly looking beavers with spike-covered tails high-tailed it as I approached. They were more content with building their dams than assailing me as I trotted past humming “Country Roads”. The tire-sized mutant ticks, on the other hand, were more than happy to take a stab at my juicy, juicy blood, their new size truly a horror to anyone who, like me, grew up all too familiar with the dreaded tic season. Then there was Graham, a helpful super mutant trading his wares, and his adorably named brahmin pal Chally the Moo Moo. Just inside the starting town of Flatwoods, I found a delightfully friendly opossum, its gangly tail wagging back and forth as I leaned down to inspect its many heads. Oh there were people too, other players dashing to and from quests with names like 4206969 and dadbreaker. We didn’t talk much; I came back to find one of them had killed my darling opossum. I’m still in mourning.

In typical Fallout fashion, the remnants of humanity left behind are every bit as fascinating as the landscape’s new ecosystem of mutated animals. Unlike in other games in the series, Fallout 76’s proximity to when the bombs fell means there’s still fresh evidence of the moment of impact. Human-shaped mounds of dust and ash stand contorted, frozen in fear along the roads, much like the bodies preserved at Pompeii. I touched one and it collapsed in a heap with a burst of radiation. Sometimes I’d follow the path described in a person’s letters or other personal effects just to see what became of them; often the trail ended at one of these corpses.

I’m not sure if it was a glitch or not, but I often came upon ghouls and scorched (a new brand of enemy; essentially ghouls with guns and some creepy voice lines) tending farms along the countryside and waiting in burnt-out homes, as if, had they been undisturbed by my exploring, they enjoyed some semblance of livelihood in the wasteland. Their computer logs often pointed to this, though because it’s Bethesda’s Fallout and not Interplay’s, my only ability to interact with this surviving population is to murder them. Ah well. At least their lives make for interesting stories after they’re dead. 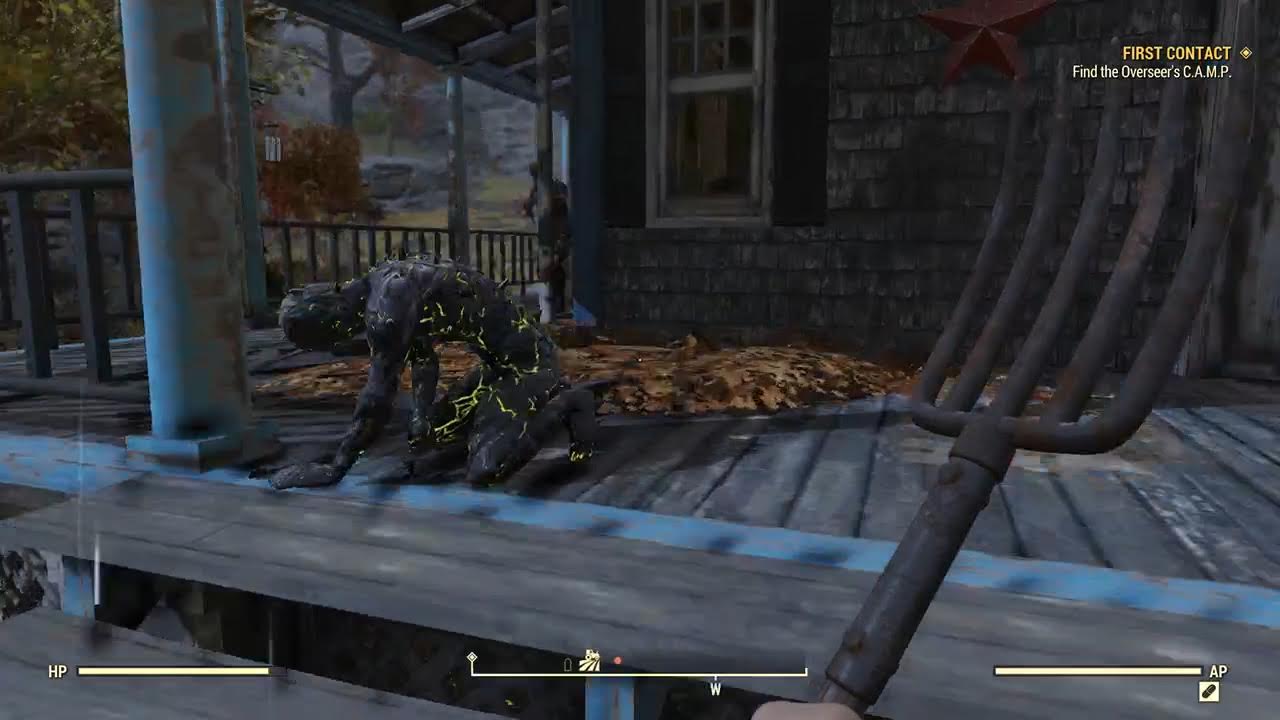 As I explored beyond the starting town, one location in particular caught my eye: Point Pleasant, home of the Mothman Museum. Last summer, I had a chance to travel out to West Virginia for a family reunion, and I was excited at the chance to see the one and only Mothman statue. The West Virginian cryptid has grown into no less than an obsession for the internet, in no small part because of this statue. Or, more accurately, this statue’s butt, one of the finest and most beautifully sculpted butts the internet has ever seen. Sadly, I wasn’t able to marvel at it firsthand on my trip to see family, so I was determined to see it in 76 if it killed me. Spoiler alert: it did. Several times.

That might have been because I got a little side-tracked along the way, though. Can you blame me when there are sites like Wavy Willard's Water Park and Tyler County Fairgrounds to explore? I took one look at the colorful recreations of tourist attractions on the game’s map and knew I had to see these bits of Americana for myself. The fairgrounds didn’t offer much except a quest to find a lost Jangles the Moon Monkey doll and several teddy bears with silly names like Bumblebear and Comrade Chubbs. The water park proved much more interesting, featuring a water slide coming out of a giant alligator’s bum and the chance to return a missing boy to his robot nanny about 25 years and a nuclear apocalypse too late. Along the way, I also passed by several areas where smoke wafted from the below the earth, what I can only assume is a nod to the still-raging underground fire in the mines of Preston County, West Virginia. 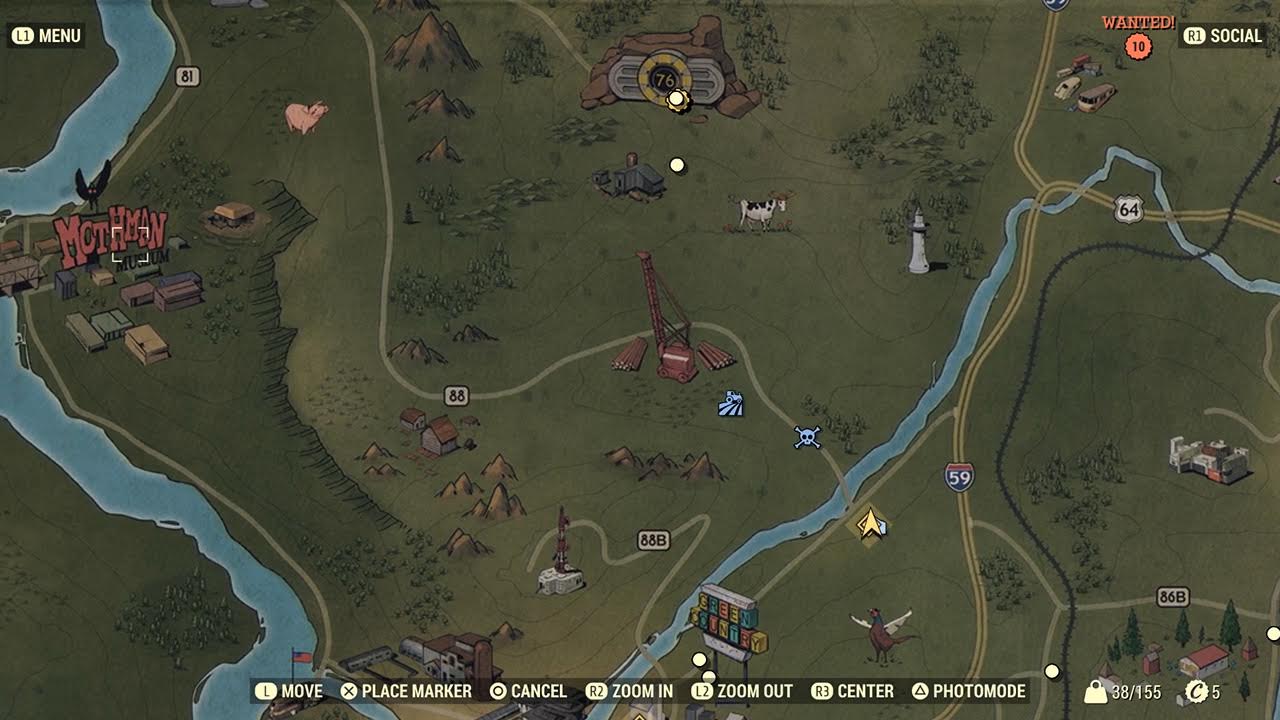 By the time I rolled into the town of Point Pleasant, the beta was nearly over, but I’d be damned if I let it end without me getting a glimpse of that sweet cryptid backside. The town itself was overrun with scorched, several of whom were perched on top of buildings with nasty pistols to keep me from finding my mark. I’d managed to avoid heavy gunfights while exploring up to that point, if you don’t count other players taking pot shots at me from afar, so I was nervous but fiercely determined.

I loaded my pipe pistol and took off, loading shot after shot into their mutated faces. At one point I rounded a corner to find six of them waiting to ambush me, and I had to quickly duck behind some rubble and play peek-a-boo with what little ammo I had remaining. The battle took me down to my last stimpak, but at the end of it all I found it: The Mothman Museum, and better yet, dat ass. 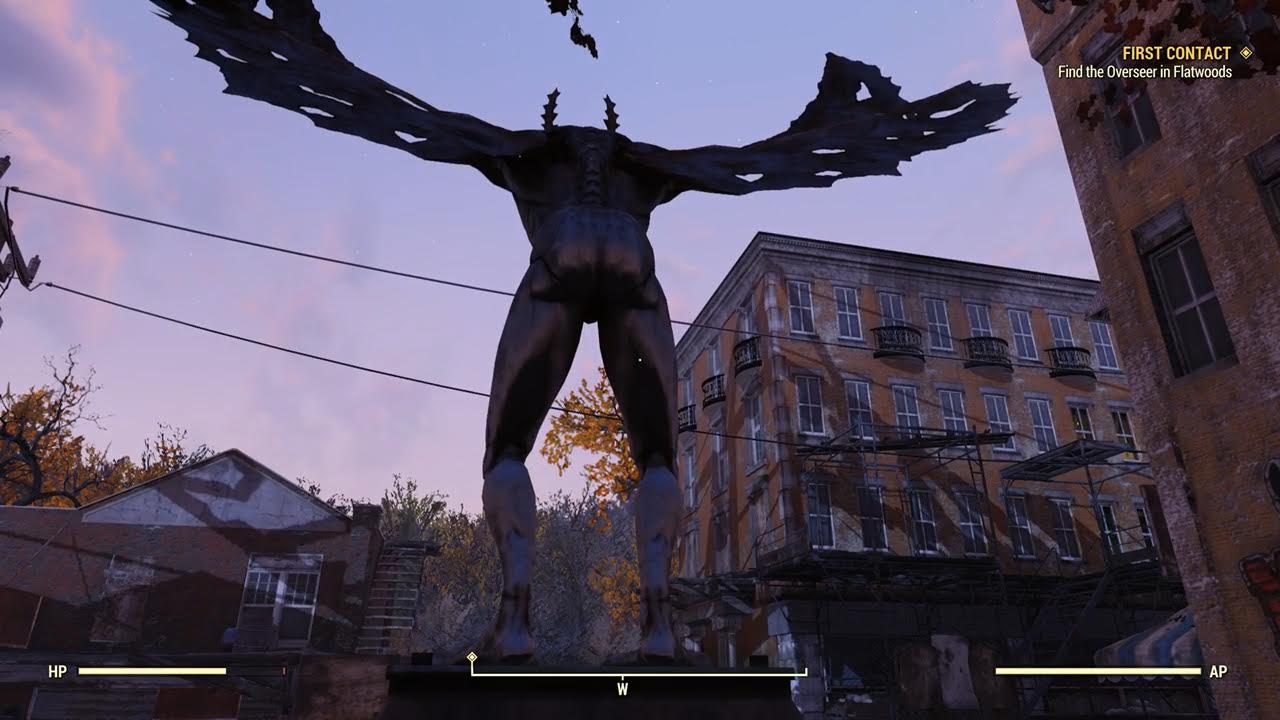 Alyse had to knock down resolution to keep frame rate up, so the screens she took might not be as high res as you, or Bethesda, were hoping.