The retro FPS renaissance is in full swing. Whether spurred by the seemingly immortal Doom modding scene, Id's own franchise reboot or just an audience hungry for something fresh after a glut of overly-similar 'tactical' FPS's, there are a growing number of old-school shooters featuring swarms of monsters, an absence of regenerating health bars and a focus on speed and mobility as survival tactics rather than diving behind cover and waiting for an opportunity to return fire.

The latest on the block is Amid Evil, a high-fantasy FPS by a Indefatigable, a team of former Doom modders. I played through the current early access build of the game (which officially launches today) over the weekend, and have some thoughts on this pleasant blend of old-school aesthetics and cutting-edge technology.

While undoubtedly Doom-derivative, Amid Evil owes the most to Heretic, Raven Software's fantasy Doom spinoff. All the core elements are present and correct, right down to an arsenal of magic weapons that fit snugly into Doom's now-classic progression of firepower: Melee (an axe), the pistol (a magic wand), the shotgun (a magic sword which fires wide beams of energy), the chaingun (rapid-fire lightning trident), the rocket launcher (a staff that shoots miniature exploding planets), plasma gun (a mace that flings a spray of ice spikes) and BFG (a weird thing that shoots room-clearing balls of purple energy). Needless to say, there's a lot of coloured lighting used on Amid Evil.

Despite roughly falling into familiar archetypes, there's just enough esoteric magical weirdness behind these weapons to make them feel distinct. The pistol-slot weapon's homing bolts fire two at a time, and home drunkenly in on targets in classic D&D fashion, meaning that you can arc its shots around corners in some instances. The shotgun-like magic sword has beams that dissipate if the center of the projectile hits an enemy, but the outside edge of the beam passes through multiple targets, doing full damage to each.

Mixing this up further is Amid Evil's smartest idea: Soul Power. Enemies drop souls (and more can be found lying in the levels themselves). Collecting these gradually fills up a bar under your health. When the bar is full, your next attack will transform all your weapons into death-spewing murder-hoses for the next ten seconds, each one firing in a distinctly different fashion. The basic staff turns into a flamethrower-like spray of energy, while the shotgun-sword's beams become larger, gain piercing on every hit and also ricochet off walls and floors.

While in this mode, picking up extra souls will extend this rampage. It's basically the Tome Of Power item from Heretic (one of the best powerups in FPS history, as far as I'm concerned)  turned into a central gameplay mechanic, and it's always satisfying to use. It also synergises well with the extra enemy density on the higher difficulty settings, with more enemies meaning more souls, meaning more opportunity to spam ricocheting sword-beams everywhere. 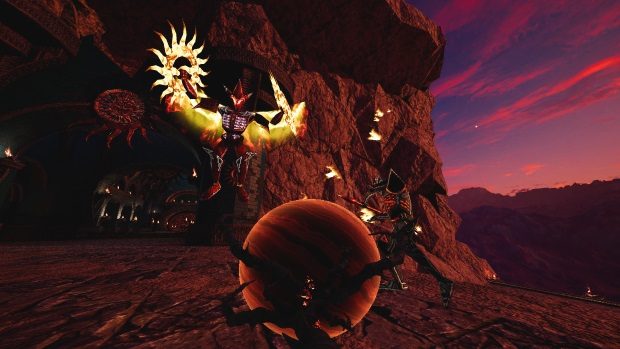 As for the levels, they probably owe as much to Quake and Unreal as anything. While there are some claustrophobic tunnels where maneuverability is limited, the game leans towards chunky, open courtyards with platforms to clamber onto, health and ammo pickups scattered across every ledge and corner, and dense enough enemy spawns to keep the game feeling intense even if you never see more than a dozen or so at a time. Many levels are impressively vertical in their arrangement, with the player's path often crossing over or under previously cleared areas as you hunt for the next key or button. There's no fall damage, a generous amount of air control when you do have to jump and the movement speed is very high with minimal inertia.

The current early access build of Amid Evil contains the first three of seven planned worlds, each containing three regular levels and a boss stage, plus a survival/arcade mode. Impressively, Indefatigable have gone the extra mile and produced a completely distinct aesthetic and enemy-set for each world, with the first being traditional fantasy temples filled with armored humanoids and the second being stranger, more abstract alien cathedrals packed with weird monsters made of blood and eyeballs. I'm hoping for full mod support eventually, because as nice as it is seeing a fresh handful of enemy types every few levels, I'd love to see what encounters could be assembled from combining the enemy pools.

Regarding the enemies, one thing that I'm a little conflicted about is how fast and aggressive melee enemies are, with them almost always able to outpace the player in a straight line. While I appreciate that there's not as many of them, so they need to be quicker to be threatening, I still prefer Doom and Heretic's 'wall of angry meat' approach to close-combat monsters and found it lent itself to more scaleable encounters. The bosses, too, fall a little short of the mark. The first and third bosses are pure damage-sponge slugfests, with the second having at least a mild puzzle element to it, despite its movements feeling a little too random and unpredictable.

Thusfar, Amid Evil is a satisfying little old-school romp, and well paced. During my time through the current 12 levels, I only found myself lost once or twice, with the architecture feeling smartly designed enough to funnel the player's attention towards the next fight, key or button to press. Despite the chunky architecture and low-poly enemies, the lighting and reflection effects are pure Unreal 4, meaning it can look rather nice at a distance, although the (intentionally) unfiltered textures give it a crunchy Quake-like vibe up close.

If there are any major concerns I have for the full version, it's that there aren't enough weapons. Having the arsenal roughly mirror the original Doom works well enough, but when you have seven worlds with unique enemies in each, I can't help but wish there was at least one unique tool per environment. Bosses could do with perhaps an additional phase each, and as mentioned in my original look at the game, enemies can sometimes be similarly colored and textured enough to get them lost against the backdrop. You'll notice them for sure once they start attacking, but it led to an unpleasant surprise or two in my time so far.

Amid Evil is out now via Steam for £13.94/$18 (including a 10% launch-week discount). The developers estimate that it'll be in early access for approximately four months (releasing one episode per month), and the price won't be increasing from its current level.