Minecraft's upcoming 1.16 update is going to give the Nether - the game's weirdo hell dimension - a long overdue glow-up. As of this month, Mojang have started trickling 1.16 content into the game via weekly 'snapshot' builds, which can be played in parallel to your main Minecraft installation. Now there's a couple of these available, featuring oddball megamushrooms, eerie blue lights and unappealing pig-goblins, I thought I'd load the latest snapshot, and have a play with the new blocks. Here's what I came up with by playing around in creative mode, using only blocks from Minecraft 1.16. 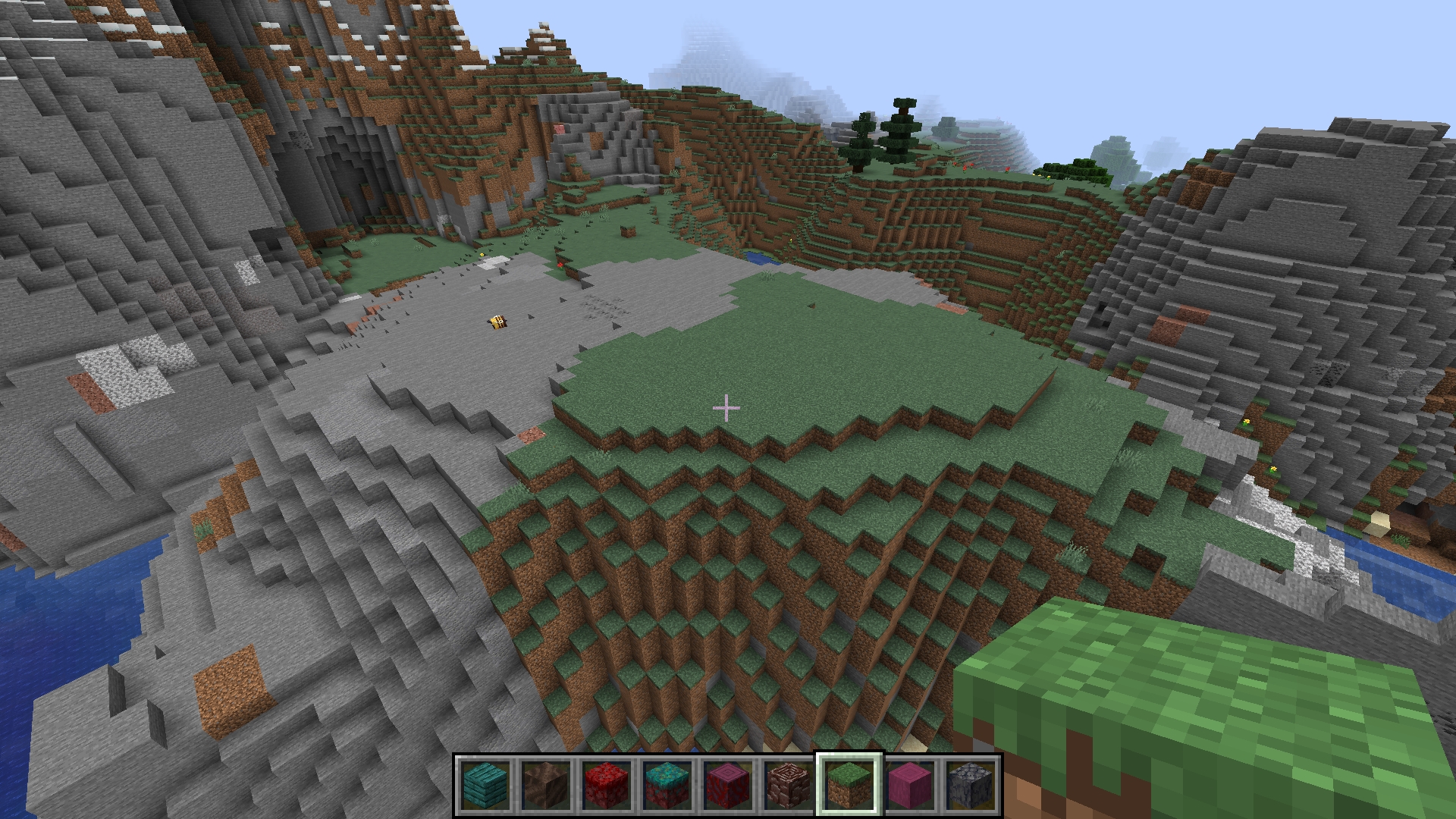 First I needed a nice spot to build in, and before long, I came across this nice little flat-topped hill by the sea. There was even a bee bumbling around in search of flowers, which seemed a good omen, so I settled in. 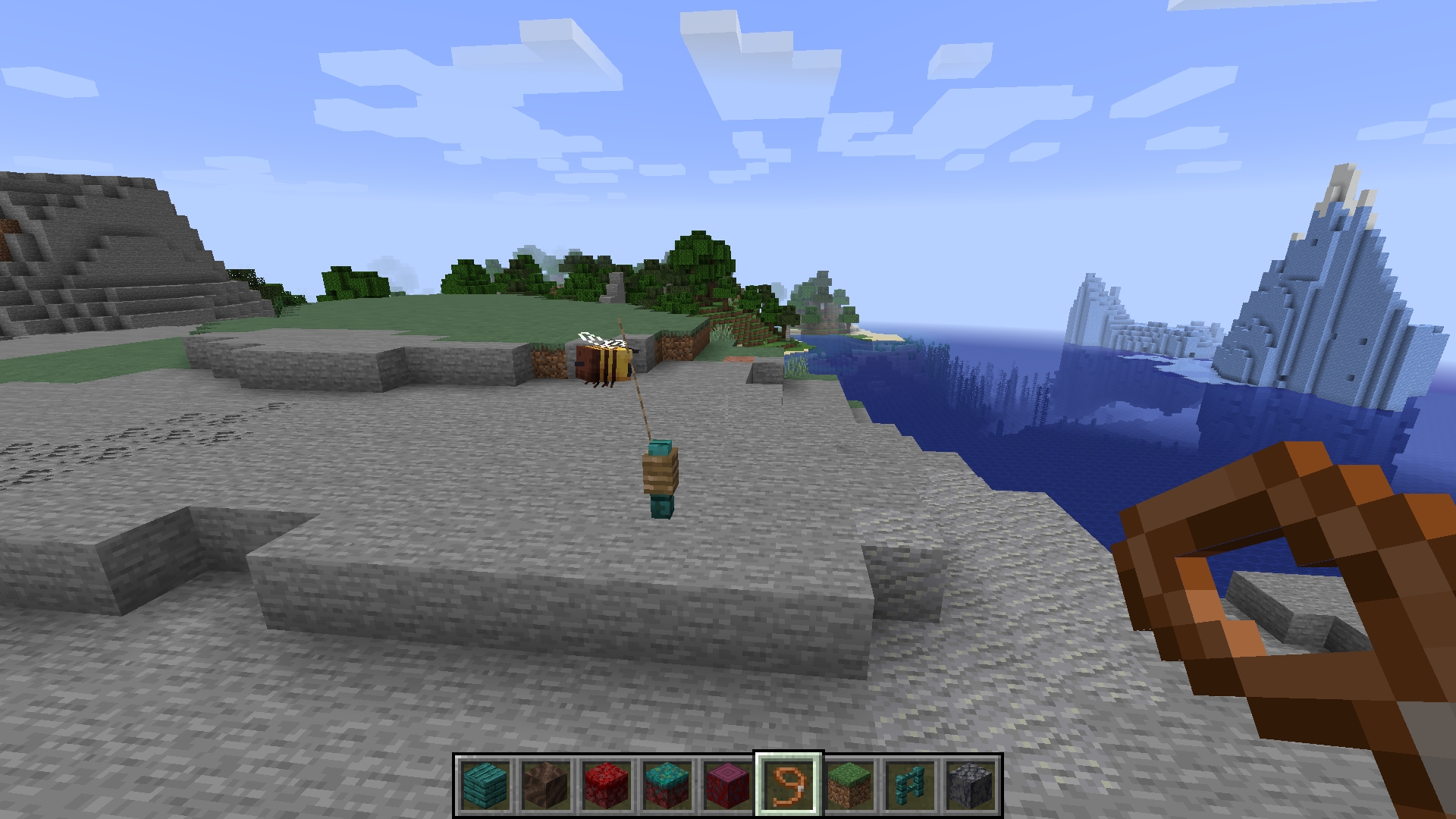 Immediately, I imprisoned the bee. It would be forced to watch, in mute horror, as I constructed my weird nether shrine. 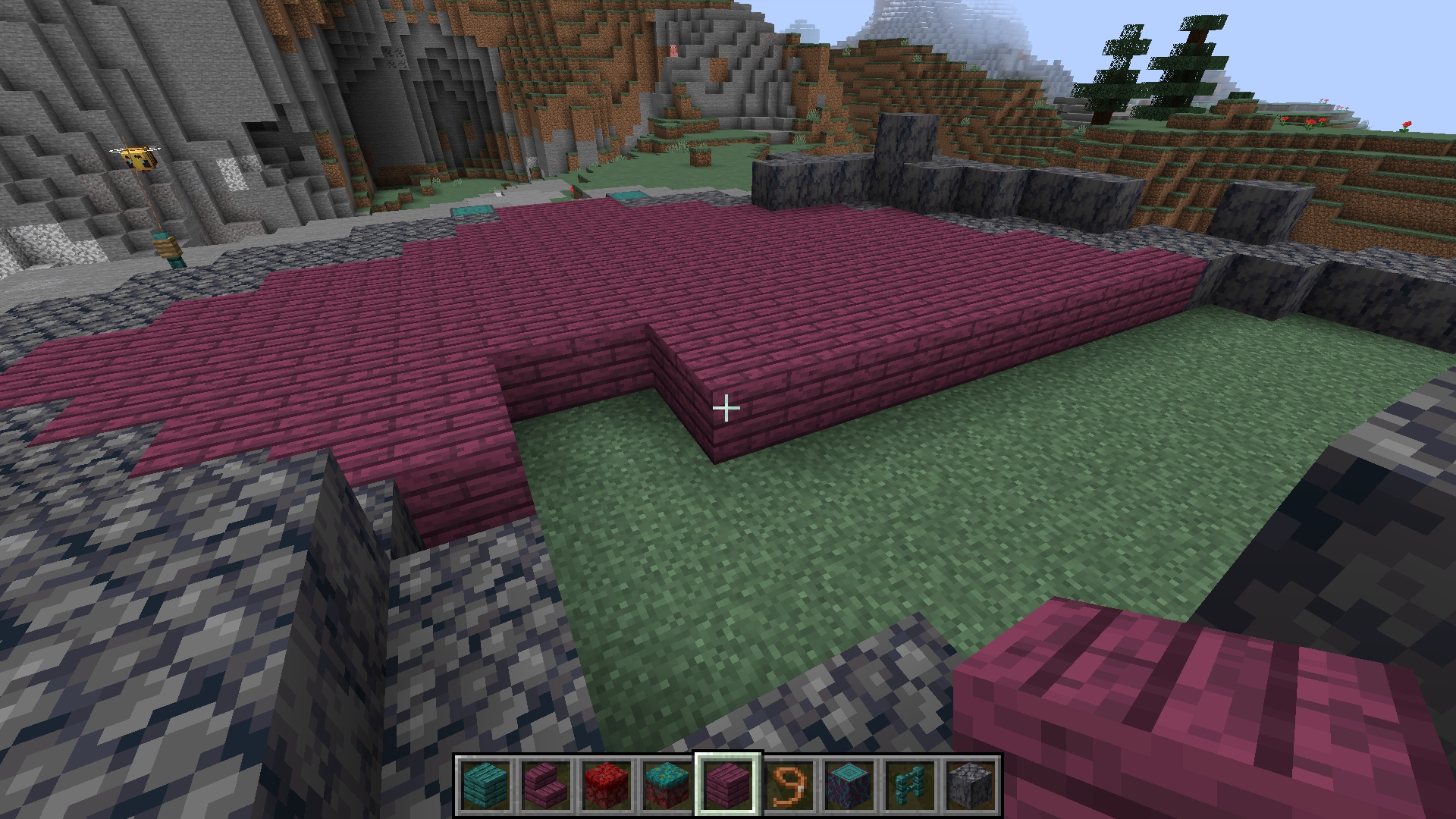 The big new stone type introduced in 1.16 is everyone's favourite mafic extrusive igneous rock, basalt. A bit like Minecraft's existing logs, the 'salt is a directional block, with a smoothish outer face on four sides, and cracked 'ends' on the other two, so you can make pillars of it that look like they're jutting out of the ground. I decided to make a rough ring of basalt, maybe to suggest my build was erupting into the world from below.

Most of the new blocks in 1.16, however, derive from the two new kinds of giant mushrooms that now grow in the nether - one's a sort of grim fleshy crimson, and the other is a sort of a sickly, overactive teal. The former can be refined into some pretty classy purply planks (that are immune to fire, by the way), so I decided to make the floor of my shrine with those. 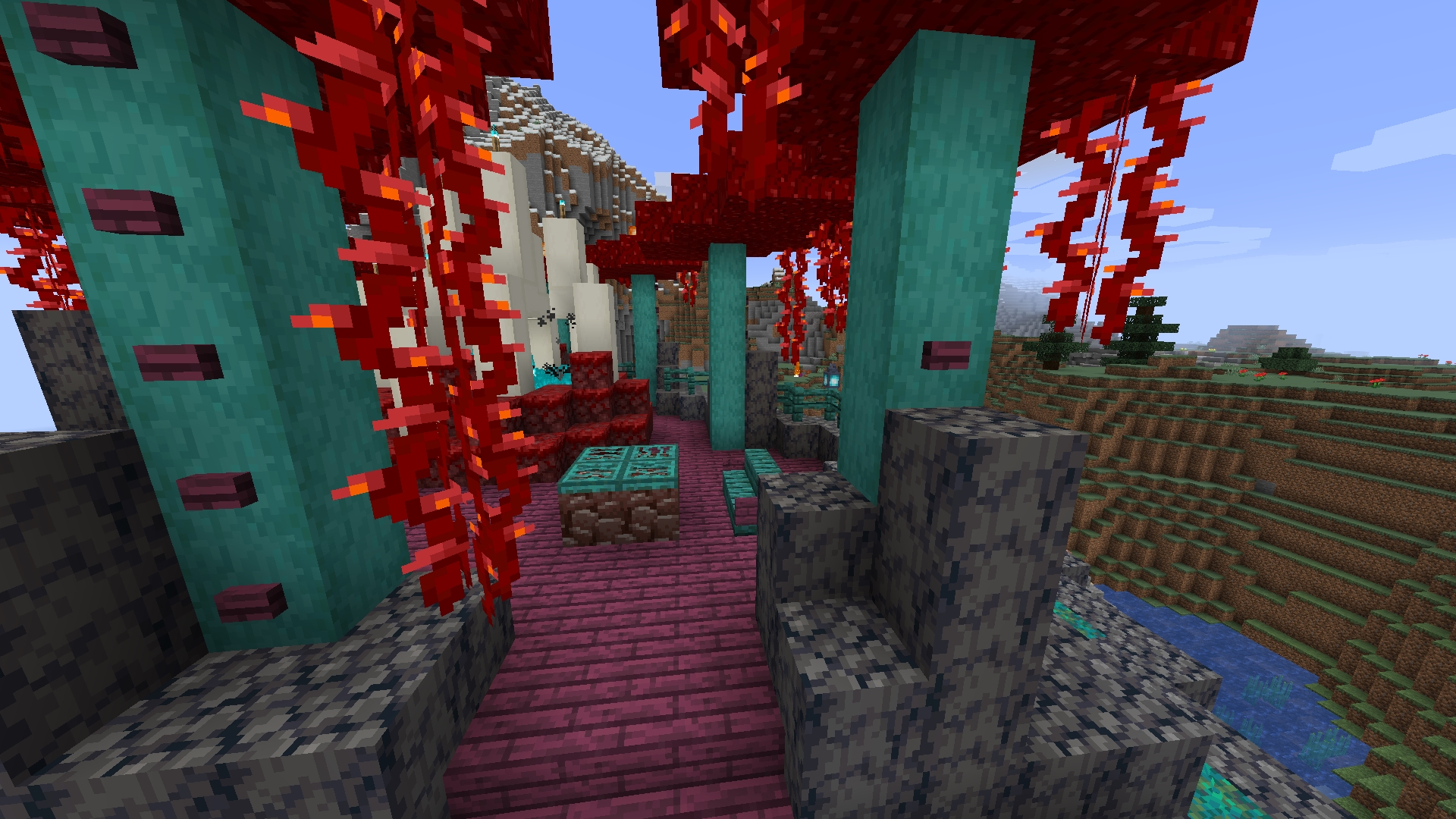 I stripped some of the teal mushroom 'logs', and used those as pillars for the build, decorating them with knobbly little crimson wood buttons, and topping them with the horrible meaty spongy stuff that the crimson mushrooms are usually capped with. You can also see there's a lovely/grim new red vine (called "weeping vine"), that grows down from the bottom of blocks it's placed on, and glows a bit. It's very War of the Worlds. 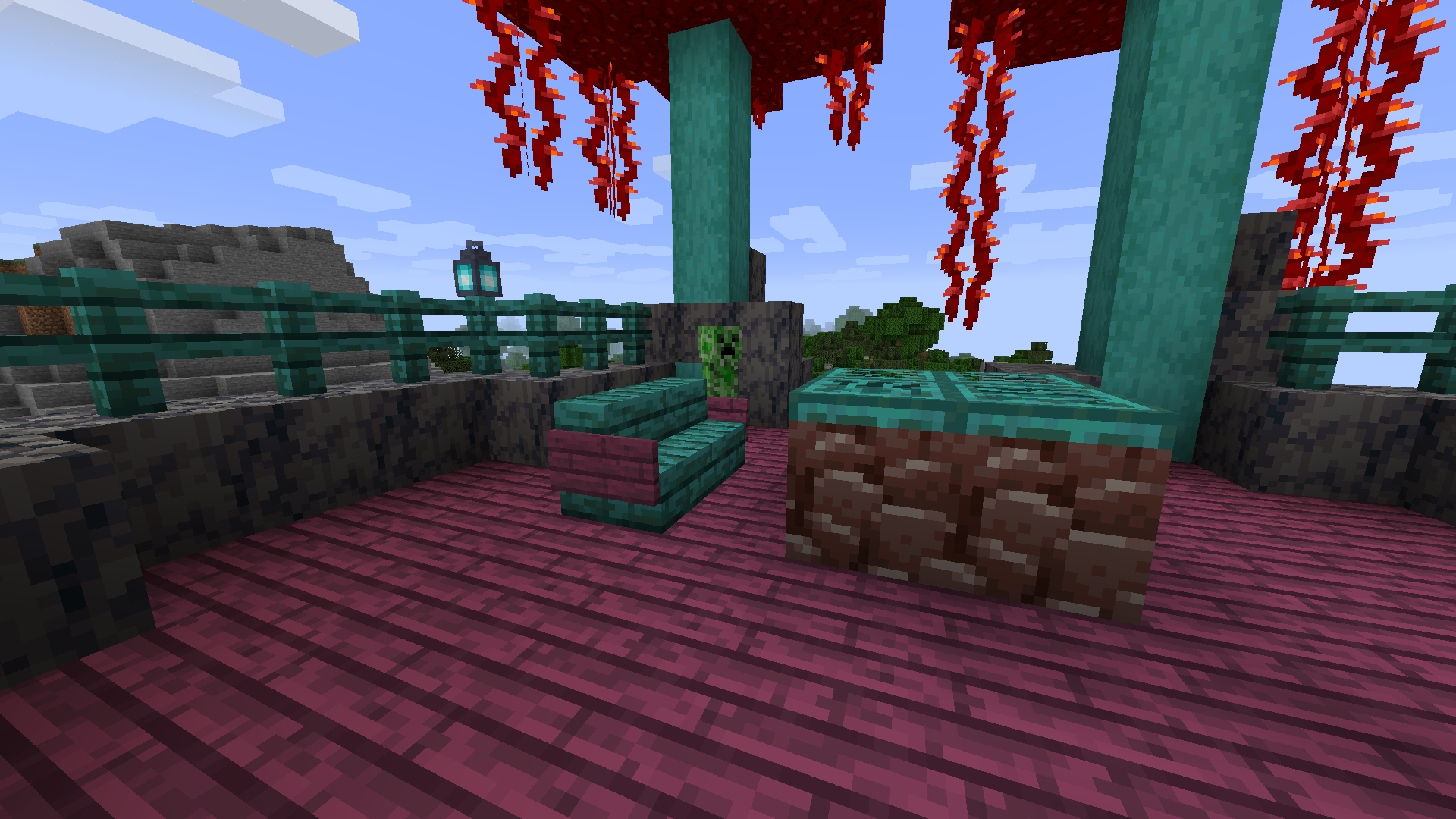 Here's a sort of generic lounge area, for when the cultists manning the shrine want to relax and kick back. A creeper is there, to tell them jokes while they are off duty. You can also see one of the cool new blue lanterns on a teal mushroom-wood fence, while the 'table' is made from a weird new block called Ancient Debris, which can be crafted into the new, super-duper, better-than-diamond mineral Netherite. 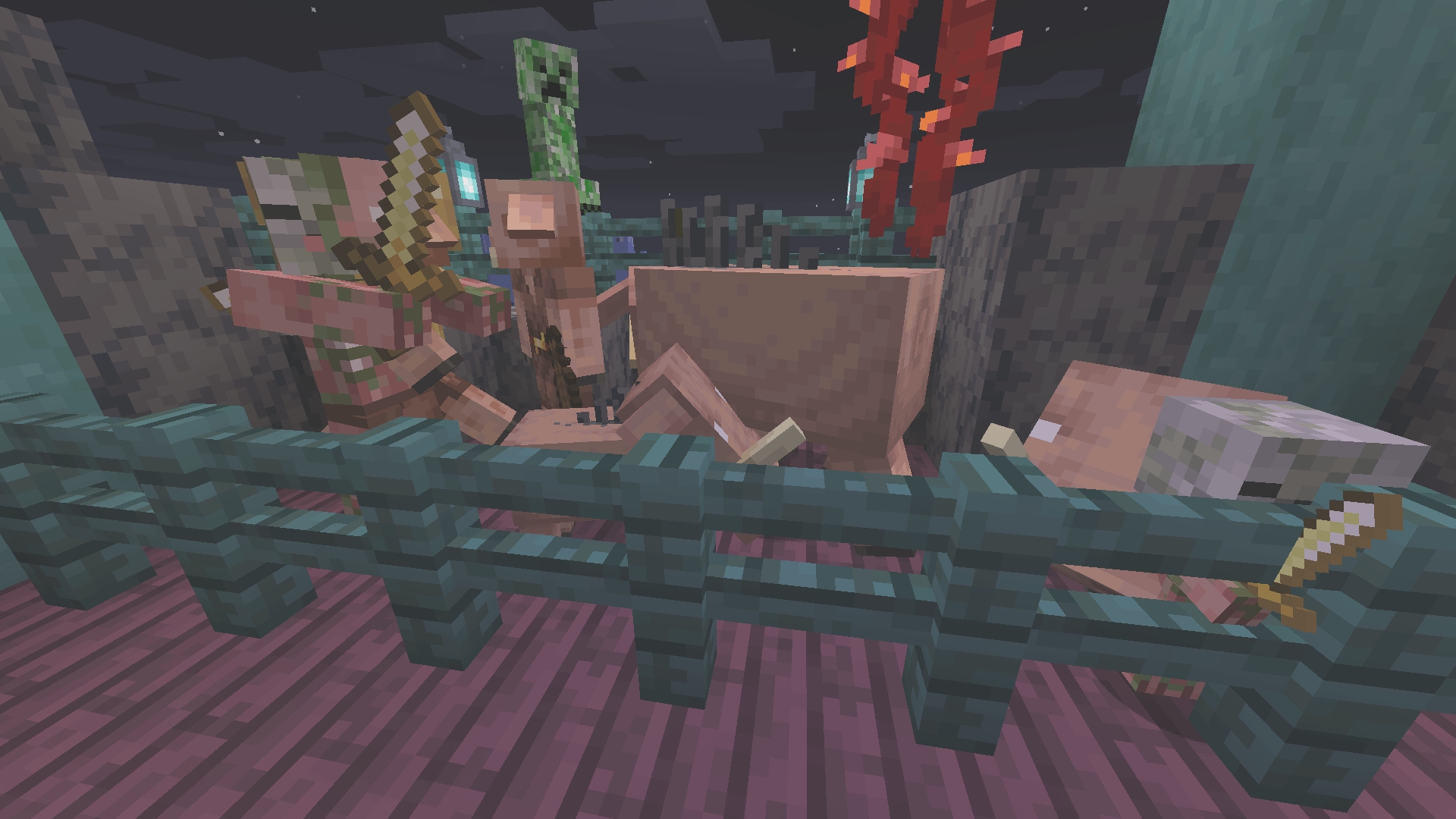 The shrine also contained a half-arsed zoo enclosure for the new mobs from 1.16: a sort of unpleasant, pearl-eyed warthog thing called a hoglin (which feels like it belongs in Planet Zoo), and pig people called piglins, which make incredibly upsetting noises and are essentially the baddies from the Warrens in Darkest Dungeon. Outside the Nether, as I discovered, they transform into zombie pigmen in a few seconds. 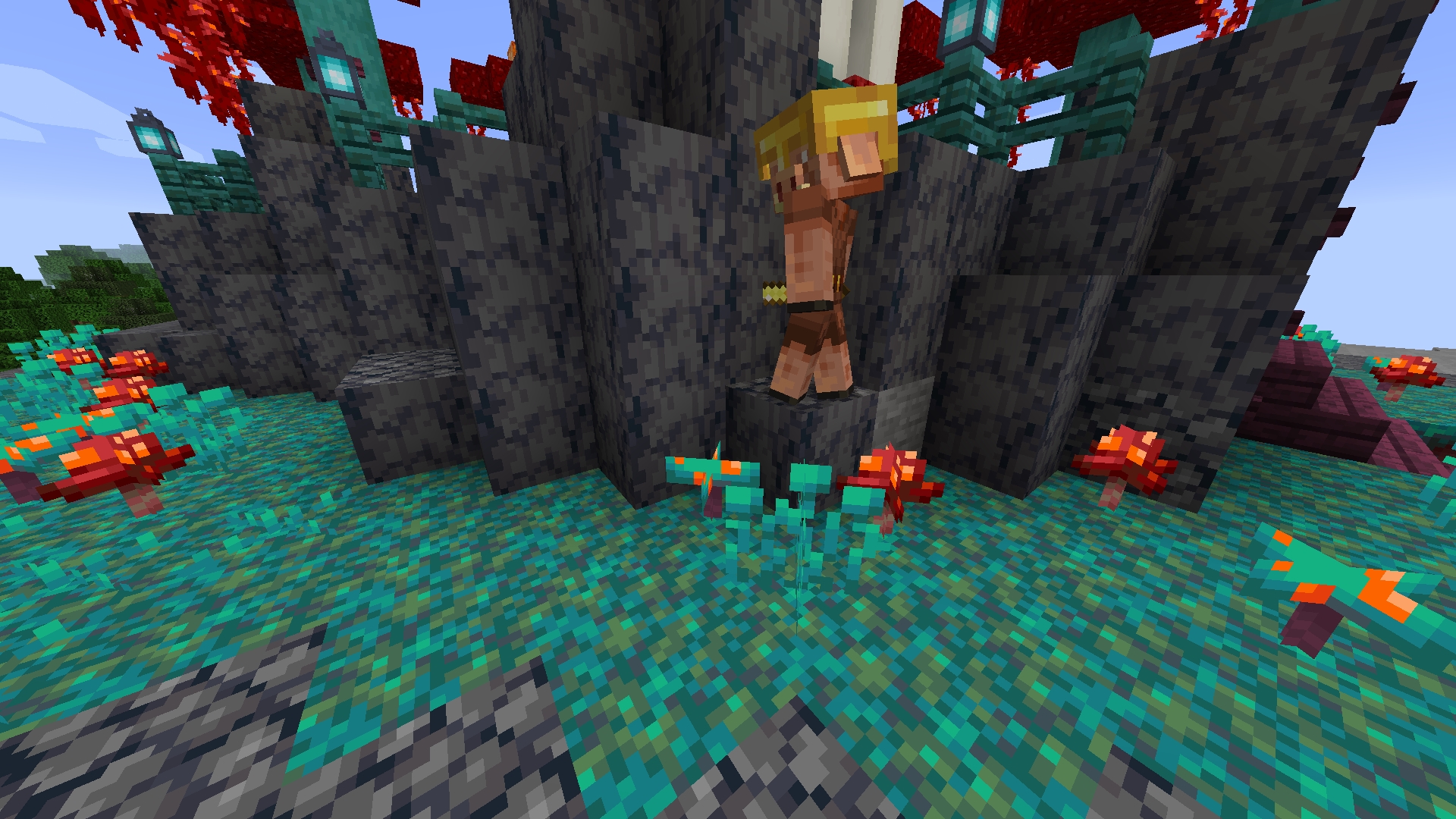 Here is a young piglin (apparently, they love golden armour), having a wander in the shrine's garden, which is made out of the weird teal mycelium that the big mushrooms usually grow out of. 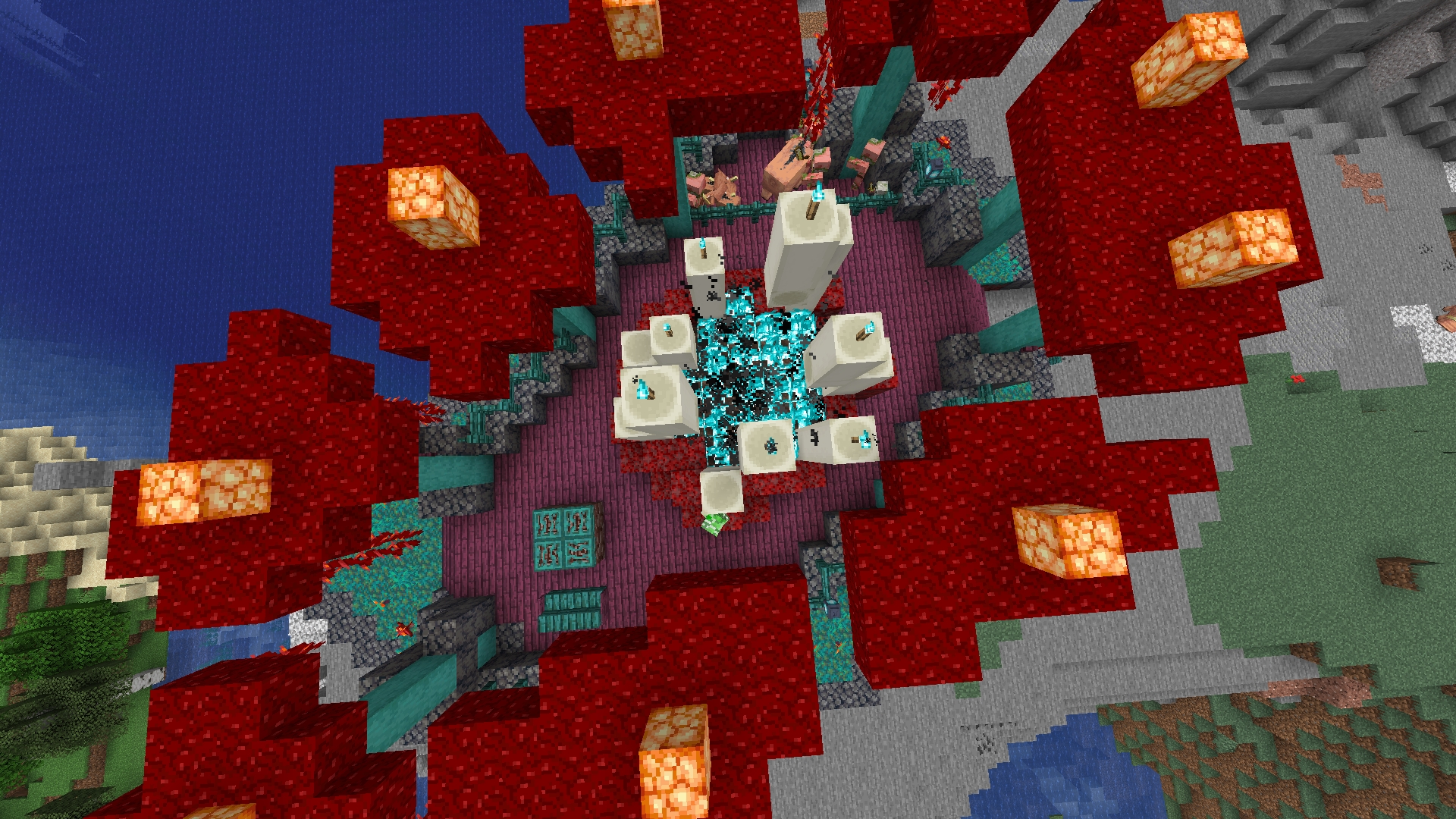 Here's the shrine from above - you can see I've topped the mushroom pillars with the weird new glowing blocks called shroomlights, while as a centrepiece I've installed a pit of the new mud type called soul soil (not to be confused with soul sand!), and set fire to it. It burns with an eerie (and very damaging) blue flame. The only non-1.16 block I've used is the bone block from a few updates ago, as I wanted to have grim bone candles bursting from the fleshy border of the burning blue mud pit. Lovely stuff. 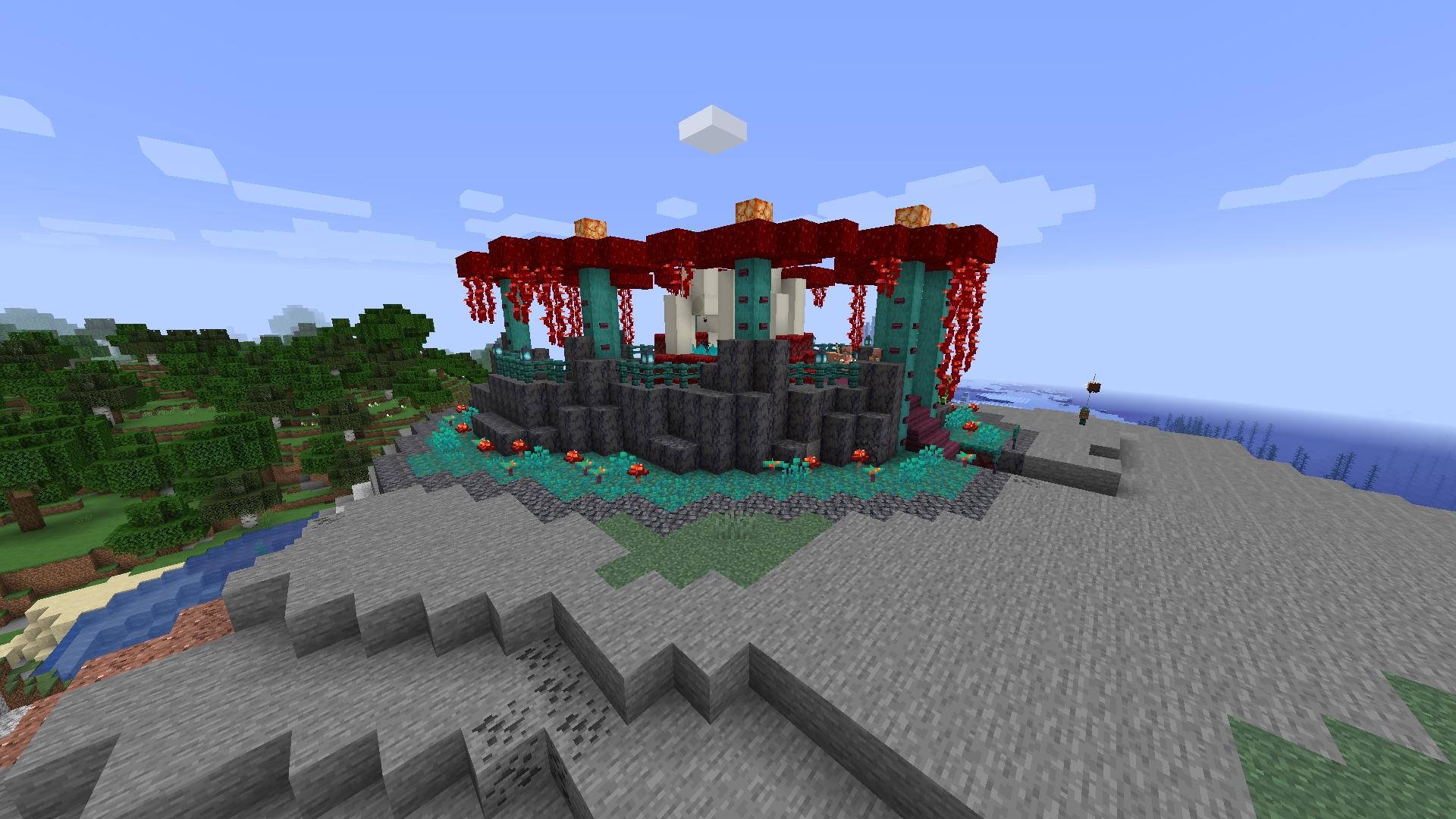 Anyway! Here's how the shrine looks during the daytime... 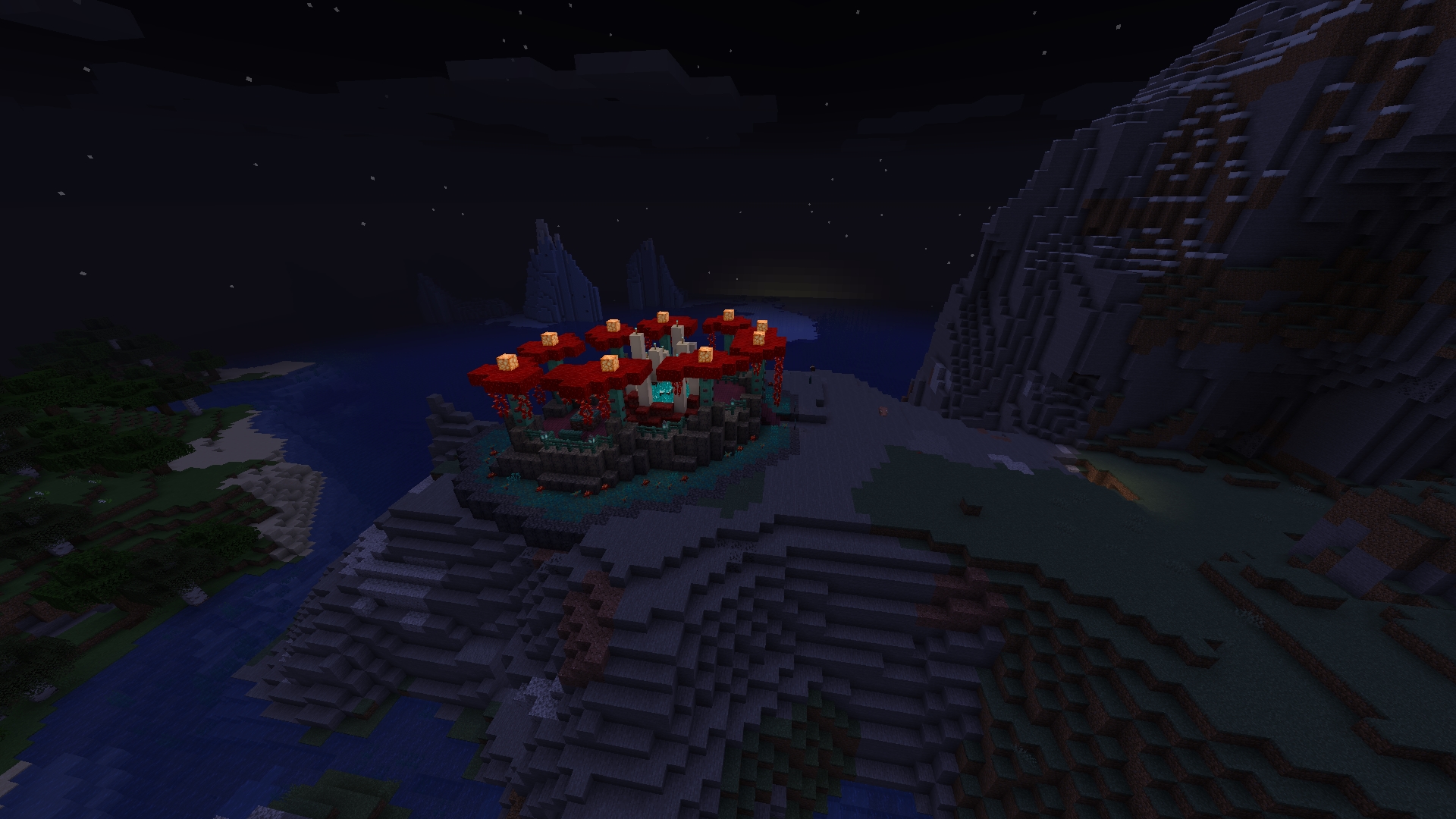 ...and here's how it looks at night. Just pity that poor bee. 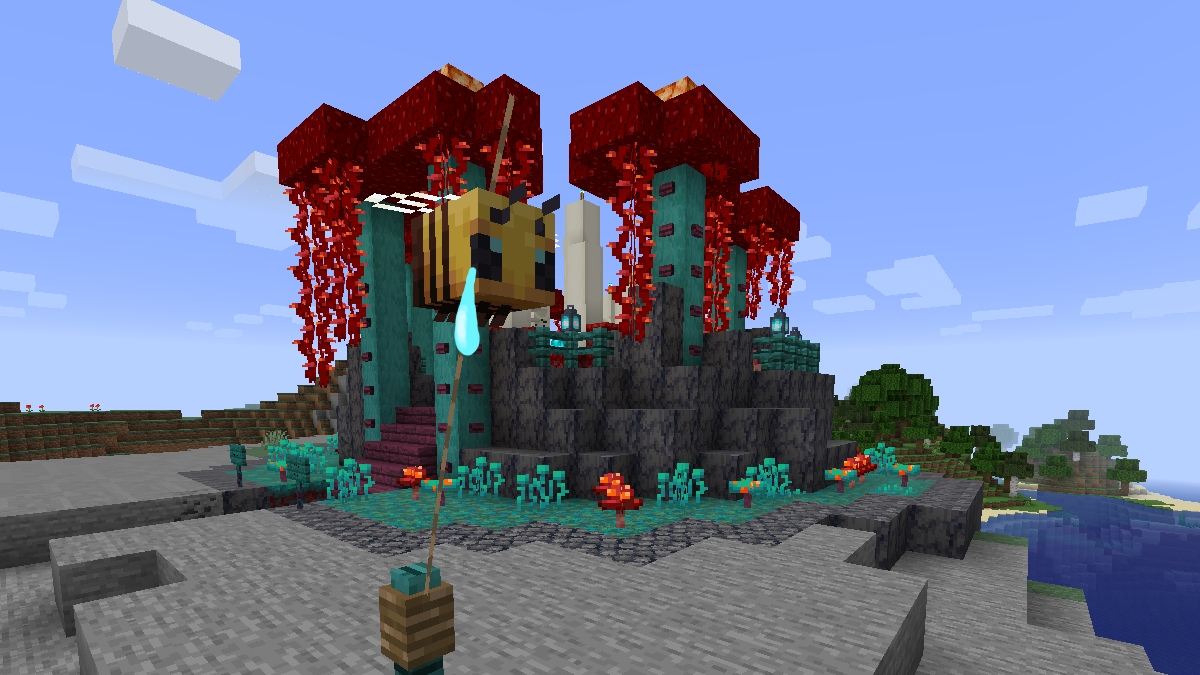 If you're looking to build your own fungal shrine, you might want to check our list of the best Minecraft seeds before you start.