Beating Zorah Magdaros for the second time resolves one problem but unlocks a new mystery. Weird scales have begun showing up on the island that seem rather similar to the Rathian, but are a vivid shade of pink. As an introduction to the colour variants, Pink Rathian adds a little more complexity while retaining its arsenal of poison-inducing attacks. This guide will show you not only how to find it, but also the monsters you need to defeat in order to encounter it, and how to kill it.

If you have found this specific guide but are not in the post-game hunts, or perhaps you're looking for information on items that you can craft, then it may be worth heading back to our Monster Hunter World guide for more tips for starting out, as well as links to all our other guides. 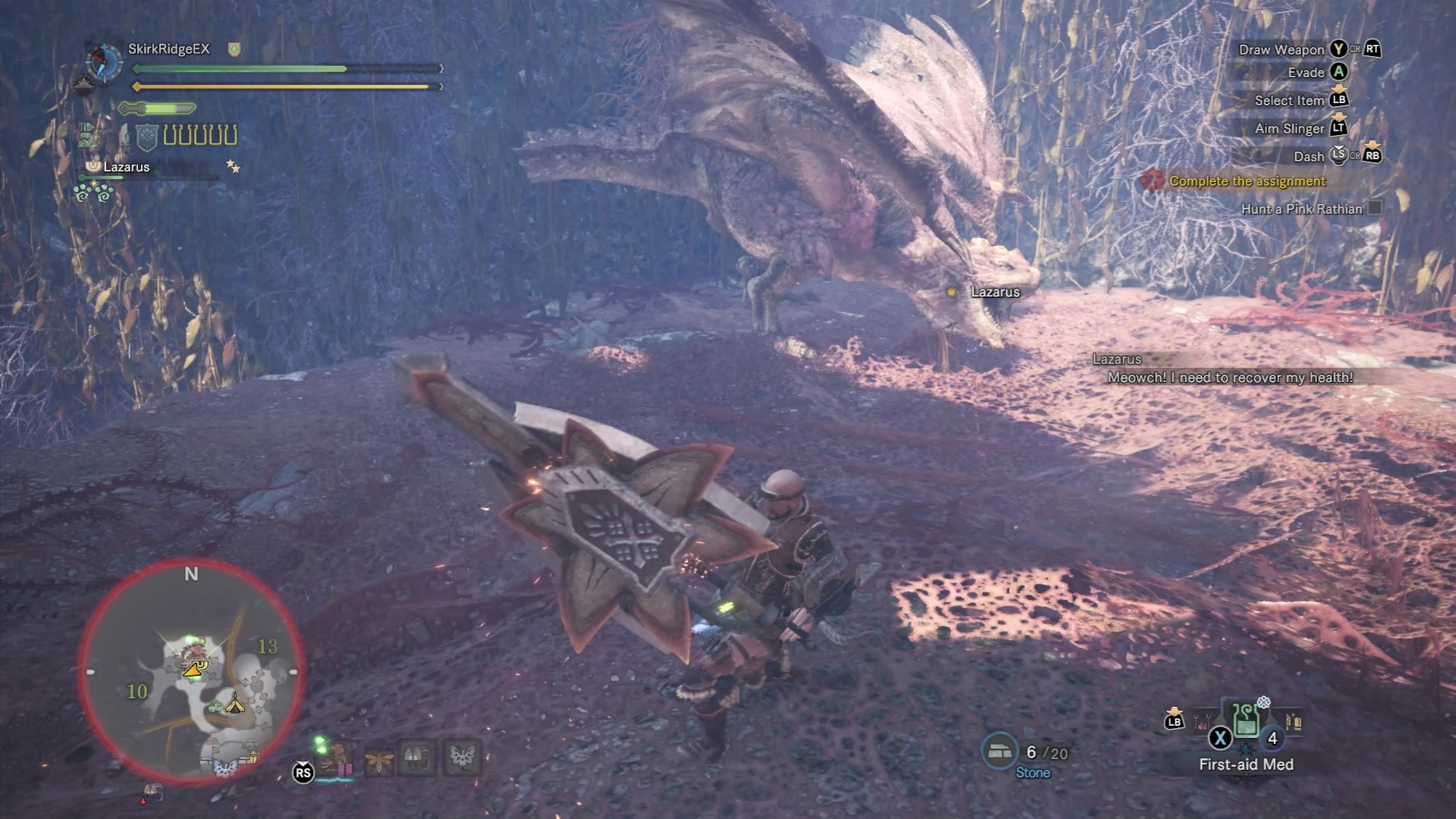 Where to find the Pink Rathian

The first step to fighting this creature is to find it by tracking it down. To locate the Pink Rathian, you first need to venture into the Wildspire Waste after hearing reports of a very lost sounding Pukei-Pukei. This is essentially the same as your standard monster hunt, so hunt this Pukei-Pukei as you normally would. The key difference here is that this one is a "high rank" version, meaning that it gives better loot upon being killed, while at the same time being a lot tougher than its low rank counterpart. The strategy is still the same though, so if you need a refresher on how to beat it, you can check out the Monster Hunter: World Pukei-Pukei guide.

You may have noticed while tracing the Pukei-Pukei that there are some strange scales lying around and you probably picked them up instinctively. Your next task is to go on expeditions or quests, it doesn't matter which, in order to increase your ecologist's understanding of the creature. In each area there's a small amount of scales that are located either near the first camp, or the various lairs of the main monsters in the area. There's more scales than you need scattered across the four maps, so if you feel you've exhausted one map's distribution of scales, head to another for more. Once you've reached the halfway mark, you'll be asked to report your findings to the ecology expert.

After hearing more about the Pink Rathian, you'll get reports of a lost Anjanath that needs either slaying or capturing. This is once again an Anjanath not in its regular location, found in the Wildspire Waste rather than the Ancient Forest. It's also a high rank version of the monster, meaning it's tougher to beat. If you need a reminder of how to take down this oversized fiery T-Rex, have a gander at our Monster Hunter: World Anjanath guide.

Taking down this creature will put you back on the trail for the Pink Rathian, so head back to the four areas and look for more scales. There are now footprints that you can find to bolster your research, which are worth more than the scales and therefore should be interacted with when you find them. Filling the research bar will trigger an event at Astera, so head back and talk to the various people to unlock the quest to take on the Pink Rathian. 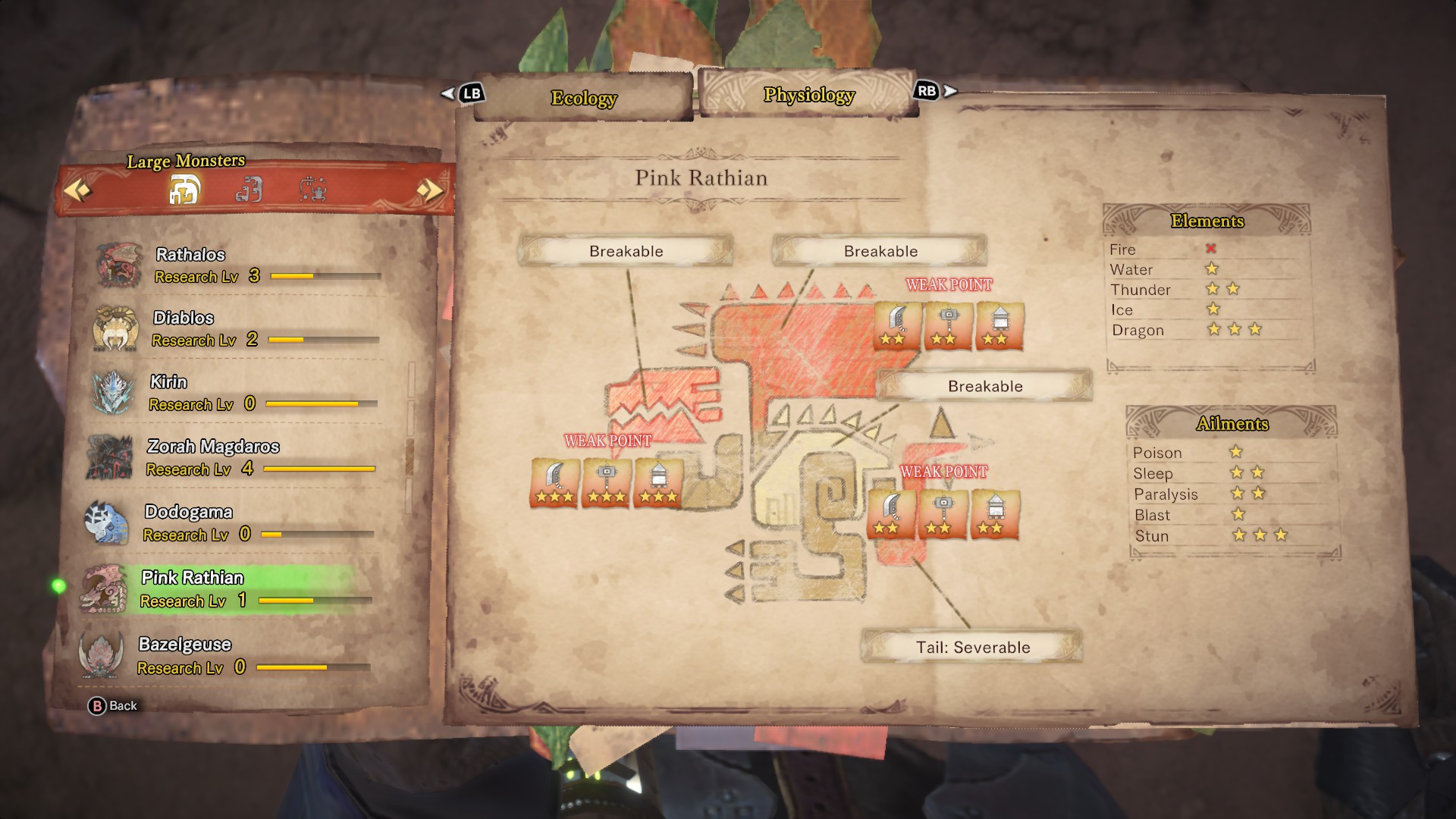 Pink Rathian has exactly the same genetic makeup as the standard Rathian, so is therefore weak and resistant against the same elements. This means dragon and thunder can be decent against it, while fire based weapons should never be brought into this fight. Conveniently this also means that it can be stunned very easily, so flash pods can be of great use. Don't try to poison or blast it however as you may not get all that far.

With the same anatomy comes the same weak points and breakable sections. One key difference is that the Pink Rathian has better armour overall, meaning you have to strike specific points in order to exploit its weakness. For the tail in particular, you have to hit its tip to get the most damage as melee weapons will bounce off any other part. Its head is by far its weakest point so as soon as the tail is severed, try to smack it in the face. Bladed weapons tend to be the way to go for this fight, though having ranged weapons instead allows you more time to dodge its attacks. 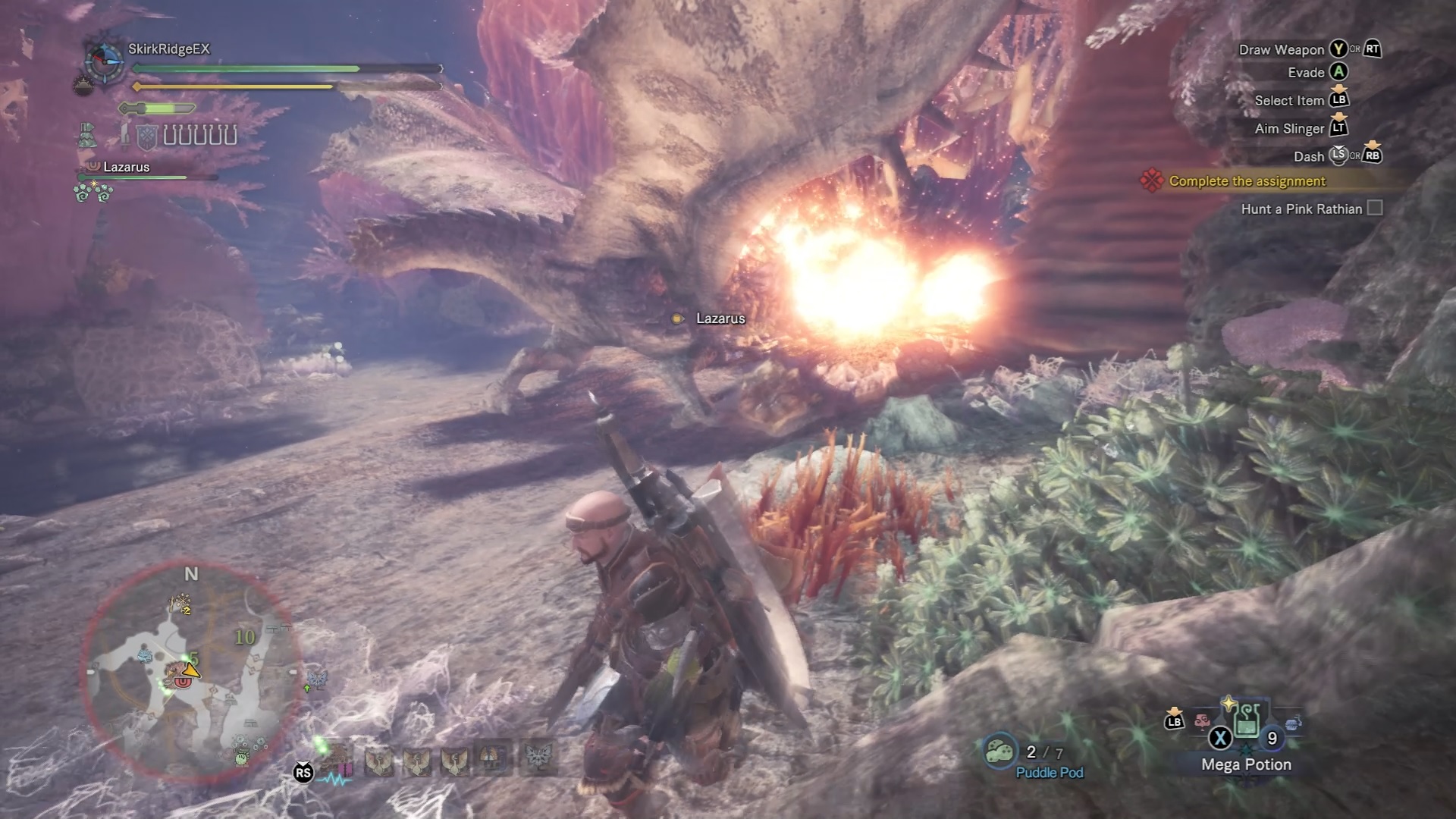 How to fight the Pink Rathian

A key thing of note when you're doing the quest line is to make sure you've eaten before accepting the quest to fight the Pink Rathian. When you start the quest to hunt the Pink Rathian for the first time, you won't even need to track it down as you start the mission with it right in front of you. Subsequent attempts will put it in Area 5 and Area 8, but generally it hangs around the same areas that the Legiana does.

To say that the Pink Rathian fights the same as the regular green Rathian would only be slightly inaccurate, so you can always check out our Monster Hunter: World Rathian guide for more things you can try to do when fighting this monster. As for specifics when fighting the Pink Rathian, it is hyper aggressive compared to its standard counterpart, even if the standard Rathian is a high rank version. Its attacks are slightly quicker and it hits harder too, which considering it can track slightly with its poisonous tail is a huge problem. On top of all that, it also doesn't telegraph its physical attacks as much as the standard Rathian, so it becomes a lot harder to work out when to dodge.

The trick with the Pink Rathian is to nip in and out during an attack's cooldown. With the tail whip, it will linger in the air for a short time before landing, so this is the ideal time to get a few hits in. When it's breathing fire, provided you're off to the side of it, it will take a few seconds to build up to its next attack. There's one extra trick it has when enraged where similar to the Anjanath it will augment its bite attacks with fire, so ensure you're rolling to dodge those attacks.

As for strategies to defeat the Pink Rathian, try and mount it as much as you can as it's the best way to attempt to chop of its poisonous tail. This should be your main priority when beginning this fight as doing so negates the poison attacks, which will heavily reduce the number of healing items you're consuming in this fight. When hitting it normally, go for the tip of the tail as there is armour on the main part. Once you've broken its tail, the fight becomes a tiny bit easier but only in the sense that poison is no longer a factor. You will still need to be conservative with your attacks, so try to hit the head or wings.

In the quest to beat the Pink Rathian, you'll likely bump into both Legiana and Tzitzi-Ya-Ku. Legiana has a small chance of landing a good hit or two on the Pink Rathian when it's weakened, so you can use that to your advantage. If however you're finding dodging both of their attacks a little taxing, you can always fling dung pods at it to get it to flee. Tzitzi-Ya-Ku on the other hand can stun the Pink Rathian, so make sure you're not in range of its flash, then go in and score a few free hits.

What materials can I get from the Pink Rathian?

That concludes the guide on the Pink Rathian, but there are plenty more monsters in Monster Hunter: World's post-game to go out and hunt. You can remind yourself of how to defeat the previous monster in the campaign in our second Monster Hunter: World Zorah Magdaros guide. As you prepare to finally take on Nergigante for real, you'll need to venture into the Elder's Recess for the first time. There you'll find a few new monsters to fight, some being variants on monsters you've already defeated in the past, but also our next big fight. We've been building up to facing off against the Elder Dragon that eats other Elder Dragons, so join us next time in our Monster Hunter: World Nergigante guide to find out how to slay this cannibal.