A few of us are having a grand old time in Assassin's Creed Valhalla, which I am now informed is the 22nd entry in Ubisoft's flagship series about exploring different historical settings, meeting interesting people, and brutally murdering them for your own gain.

Valhalla is Viking flavoured, set during the invasion of England known as The Great Heathen Army (great band name). Though you spend a lot of time pillaging and raiding, you also do a lot of open exploration, discovering strange standing stones, hallucinogenic mushrooms and odd quests involving nudists and betrayal mysteries. That, in fact, is my favourite thing about Valhalla: the freedom and trust that it gives you.

I talked about this at preview, but the extent to which Valhalla just steps back and lets you do your own thing feels quite unlike an Assassin's Creed game. Or possibly an Assassin's Creed game from over a decade ago (oh God we are all so old). An example from the East Anglia region, which was the big chunk we saw at preview, are these three pagan witchy sisters who sort of formed a personal cult for their dad. I don't want to spoil too much, but it's possible to find their old house first, or the secret tunnel leading to their old house, or, indeed, one of the sisters themselves. And the game never gives you a quest marker for any of them. It's great! It makes you feel like you're actually discovering stuff and that you might have been the first to find it!

This is the opposite to how I would enjoy myself in real life, by the way. If you dropped me in the countryside in, fucking, Norfolk, and told me I had to walk around without a map and just please myself, eating berries I find on bushes, I would be at best quite cross with you. And as a further aside, I think we should all be proud of me for (so far as I can remember) not making any Alan Partridge jokes about Norwich in my coverage of Valhalla.

"I have to admit, when I booted up Valhalla I never expected to feel like Poirot, but if Poirot was massive and buff and had facial tattoos. "

Valhalla isn't good adventure content like this from the window to the wall, though. There is still yer classic Assassin's Creed filler. I spent about 20 minutes decimating the ecology of one specific hill because I needed to offer a stone three hare feet. And the drop rate of feet from hares turned out to be very low. Catastrophically low for the hares, anyway.

But you'll also find that whenever you approach a town occupied by your enemies, the game will just go "well, this town is suspicious of you. Do with that information what you will." Meaning you can nonchalant about with your hood up, blending in by sitting very still next to someone else (which is how I used to get out of meetings with Graham when we were all in the office), or kill all the soldiers and set all the thatched cottages on fire. 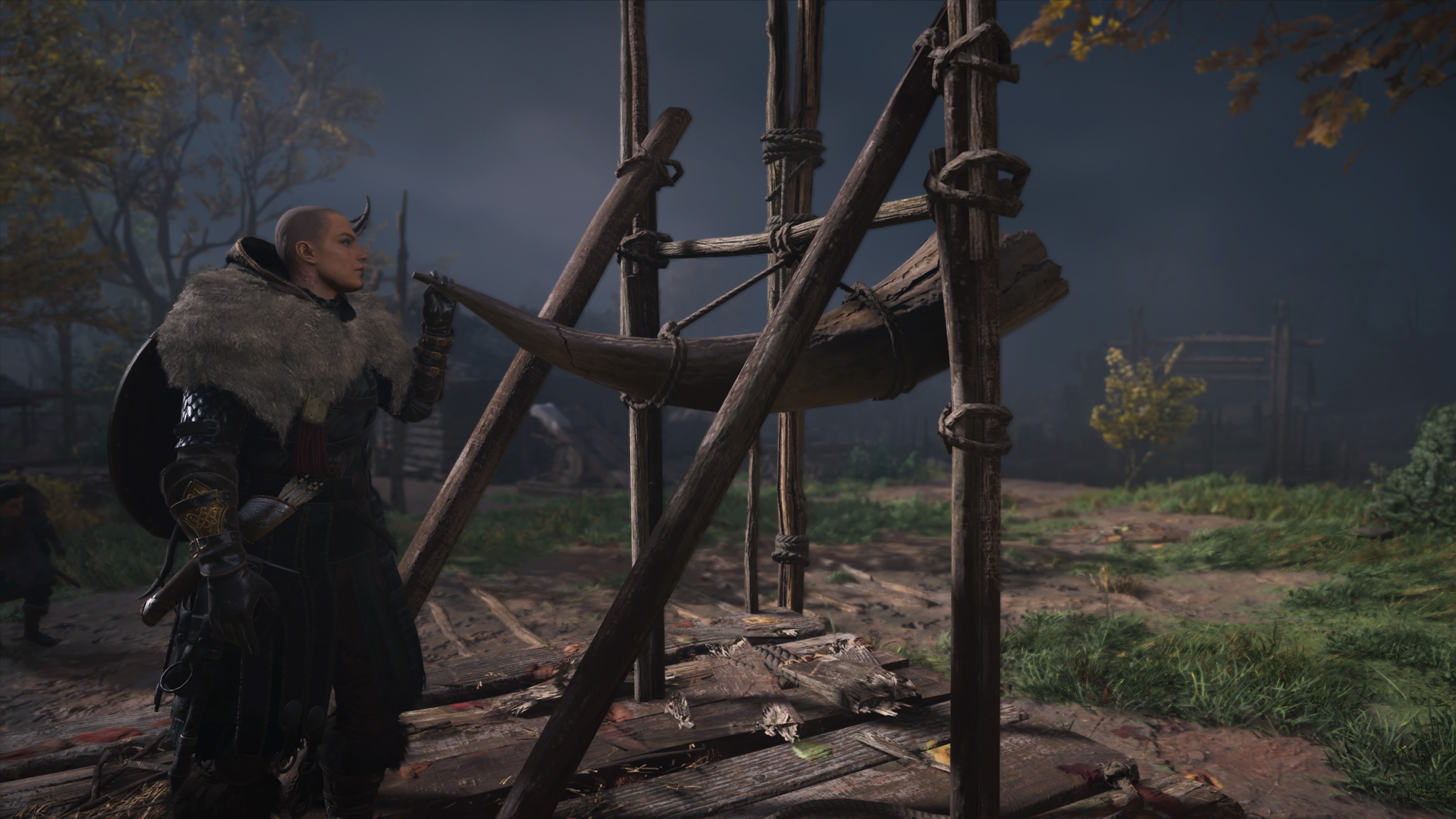 My favourite quest in possibly the whole game is one of the first you do - this being known as Bloody Baron Syndrome - and involves rootling out a traitor from the proverbial bosom of the local leader. Soma has three besties, and one of them betrayed her to the Saxons. Enter Eivor, warrior and/or detective. Now, you're told to do three mini-missions with each of the three suspects, and that's the only bit you have to do to complete the questline. You can decide which one you like the least, or seems most sus, and shop 'em to the feds.

But to make sure you get the answer right you have to go around the town, ask people if they saw anything on the night of the betrayal attack, remember the stuff you're told about boats not being in the right place and yellow paint, follow a trail, follow a second trail, and put it together with stuff that's already happened to actually solve the case! CSI: Grantebridgescire! Looks like somebody ( •_•)>⌐□-□ needs to be axed some questions (⌐□_□) YEEEEAAAAAAAAHHHH!

I have to admit, when I booted up Valhalla I never expected to feel like Poirot, but if Poirot was massive and buff and had facial tattoos.