Spelunky 2 is as tricky to survive as the original game, and poses plenty of challenges for even seasoned players of the series. In this beginner's guide, we'll give you some tips for passing enemies old and new and getting to the end of world one.

Spelunky is filled with secrets, enemies, traps, items and a lot more besides. We'll have other more specific guides soon, but below you'll find some general tips for how to play the game successfully.

Any object held in your hand can be thrown, and thrown items can trigger traps and burst enemies. It doesn't matter what it is: carrying something is always better than carrying nothing. Looking out for rocks in particular, which are found dotted around the ground on levels, can be thrown long distances, and can never be destroyed.

If you hold down, your character will crouch, but half a second later the camera will pan down to show you more of what lies below you. Spelunky 2 is a game about descending through levels, so knowing what obstacles lie ahead is essential for planning how to tackle the obstacles ahead.

In particular, look out for dart traps. These grey, square blocks are found embedded in the wall, and being hit by their dart subtracts two points of damage. They can be easily avoided by triggering them using an object dropped in front of them - see the tip above - but this only works if you spot them first.

Each Spelunky life begins with 4 health points, but there's a free extra health point available on every level in the form of the pets. By default, it'll be a pug, and carrying him to the exit will get you a rewarding lick and 1 extra health point. It's worth trying to rescue the pet on any run where it wouldn't take a bunch of bombs to reach them, because extra health will allow you to make so many more mistakes. And you will make mistakes.

Plus, rescuing a pet meets the "always carry something" rule, too. You can throw the pet to trigger pets and burst enemies, and they can take a few points of damage before meeting their own demise. 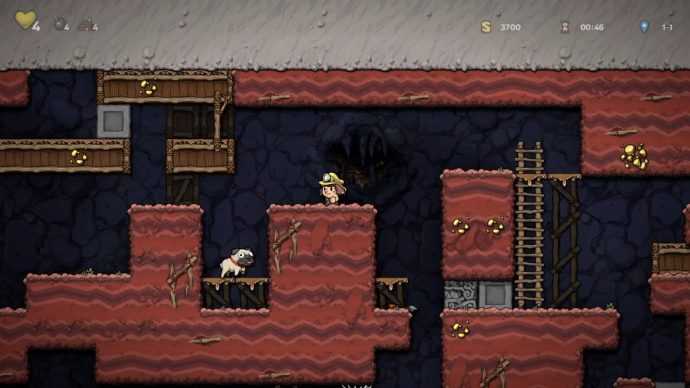 Gather as much money on the first level as possible

You'll likely prioritise progressing through the worlds and levels in your initial hours (and days and weeks) with Spelunky 2, but the eventual goal will be to maximise the amount of gold you collect. You can worry about that score later, however. For now, gold is important because you can spend it in shops to buy items which can significantly alter your chances of making progress.

Specifically, there is always a shop on level two. That means it's worth collecting as much money as possible on level one, so that you can buy something good when the shop does come around.

If you do reach the shop with money in your pocket, more bombs are always useful, but there are a bunch of other items worth your time, too.

There are tons more items available in shops, and we'll have more in-depth Spelunky 2 item guides along soon. For now, I'd say: most weapons are not worth your time, because a rock will often do as good a job with fewer drawbacks, and some of the new items such as hoverpacks and powerpacks are good but probably not worth the money in the early stages of your time with the game.

Be careful of chests and vases

Every Spelunky 2 level is littered with smashable vases and openable chests. These are worth collecting because they contain gold and gems, which is important, as explained above. However - be careful! Chests can also contain lit bombs, and vases can contain snakes and spiders. Make sure you're standing adjacent to a vase before you whip it, rather than overlapping it, or you'll take instant damage. Or better yet, use a thrown rock or other item to smash them from afar.

If you look down and scout out the area ahead, you'll normally spot a handful of enemies lying in wait. It can seem overwhelming, but fret not. It'll take time to gain the dexterity needed to fight and avoid enemies successfully, but a big part of the challenge is knowing what enemies do and what order you'll need to tackle them in.

We'll have a more robust Spelunky 2 enemies guide along soon, but here's a handful of tips for dealing with world one enemies.

That'll do for now. Spelunky 2 is an even more vast game than its predecessor. Everything is deadly, and there is nuance to every object. But the above tips should help you get started, and we'll have a lot more updates soon.