In my time with Cultist Simulator, I’ve browsed hidden book shops for arcane grimoires, sent loyal acolytes on doomed expeditions, and felled nosy investigators with poisoned tea. I’ve been reduced to begging in the street for opium money, and I’ve sacrificed followers with antique daggers in secret rites to restore my vitality. Weather Factory’s first outing is what I imagine playing solitaire with Necronomicon pages might feel like, if those pages then formed a map to the location of a much older, much more cryptic tome that made the Necronomicon look like The Very Hungry Caterpillar.

Stripped down to its skeleton-patterned underwear, it's a game of time and resource management, of crafting and experimentation. By combining cards with tiles that represent verbs like ‘explore’ ‘talk’ ‘work’ and ‘dream’, you’ll gradually uncover mysteries, gain arcane knowledge, and learn to effectively blend certain combinations to give you the results you’ll need to survive and progress.

One of your earliest tasks is to form your own cult. Some cards represent acquaintances, curious but unversed in the dark arts. Some are scraps of lore gleaned from tattered books. There are manifestations of your passion, and of your ability to reason. Begin to combine one or more of these with the verb tiles, and you’ll set timers into motion. When the timers run down, you’ll flip the tiles, and check the results. This sense of progress propels you. Timers tick and brew and search in the dark. They meld and meddle and unravel. They can tell stories in themselves, sometimes. Long, plodding work days in boredom haunted offices or hurried jaunts at secret clubs. Occasionally, they’ll turn up answers. Mostly, though, they’ll just produce ever more maddeningly fascinating questions. 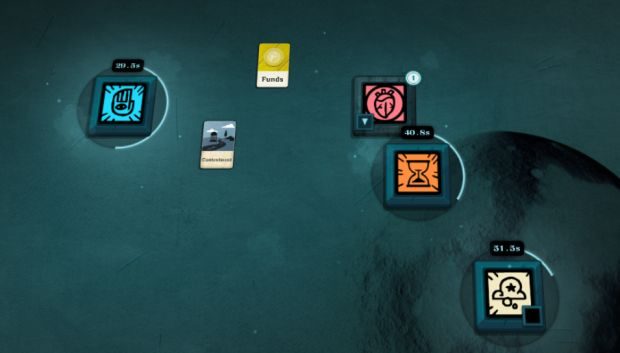 The black expanse of Sunless Sea’s Unterzee (another realm given life by Cultist Sim's writer Alexis Kennedy) is here traded out for cozy bohemian townhouses, opium tinctures and burlesque clubs, but that doesn’t mean it’s any less of a struggle to keep your head above the water. While Cultist Simulator initially keeps much of its hand hidden from you, goading you to parse out esoteric rules through frenzied alchemical experimentation, it does make a few things very clear from the outset. Chiefly, if you don’t have funds, then you will die.

So you’ll need a job, or ‘an arrangement to exchange one’s life for money’, as the game calls it. The physician begins with solid employment at the institute (‘Long hours, but good pay’) while the lowly aspirant scrapes by as a porter (‘Miserable, but it’s all you can find just now’). Some jobs are permanent —  providing a steady source of coinage for séance Doritos, tentacle wash and eldritch, unspeakable council tax —  and allow you turn up when you feel like it. Some are more precarious, requiring commitments of passion as well as time to keep demanding bosses off your pentagram-tattooed back. 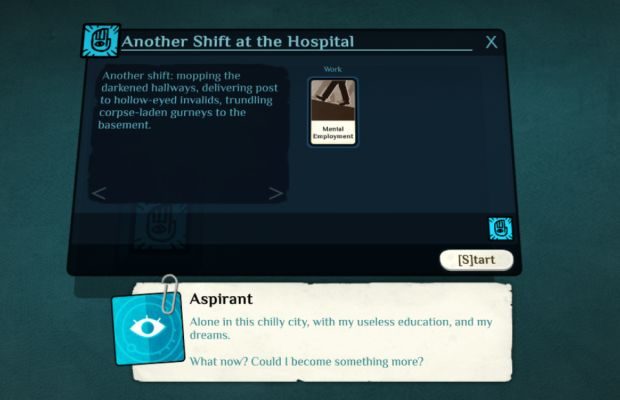 There are also less traditional paths to fund your delphic ventures, if you’re so inclined. Which, let’s be honest, you definitely are, you cheeky dabbler of doom you.  Auctioning off ancient tomes or painting impossible paintings of unpaintable stuff are both reliable, if volatile, sacrificial cash cows. You may even convince a shadowy acquaintance to fork over a sizeable investment. Just make sure you’re prepared to make good on the debt when she returns.

There’s also a big, creamy, comforting bowl of creeping dread to contend with. To counter the inevitable hangover that comes with long evenings drinking deep from the chalice of forbidden knowledge, you’ll need to find a reliable source of ever-elusive contentment. Or, you could just use drugs. Delicious and obviously very cool, but also expensive, so watch out for that. 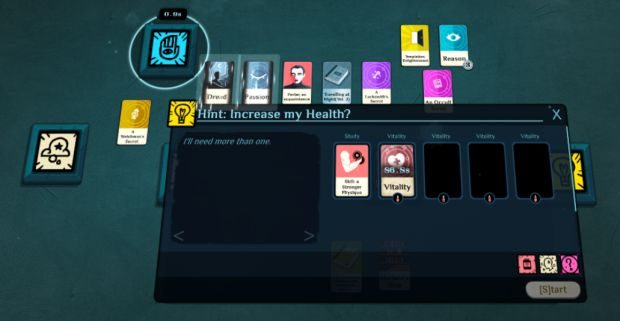 There’s hunters too, who tend to lurk around the edges of the table gobbling up evidence of your  occult miscreancy and spitting out ever-more damning cases. Like hungry hungry hippos with agendas and dreadful, piercing hippo eyes. Fortunately, hunters have their weaknesses. An acolyte attuned to the ‘moth’ aspect might be able to make the evidence vanish. Or one with the ‘edge’ aspect could try taking the hunter out for good. Or there’s poison, if you can find it. Poison works quite well.

You’re not immortal either — at least, not yet anyway — so falling ill is always a possibility. As with other dangers, overcoming your own fallible flesh prison is a case of experimenting with the cards and verb tiles available to you. It turns out there’s a fairly robust character progression system lurking behind the curtains. Cultist Simulator’s genius is its ability to weave these more traditional trappings into a layered, shifting narrative. The game has an internal logic that resembles an adventure game, transposed into a tactile tabletop format. Simply moving cards here feels satisfyingly ritualistic and esoteric in a way that most Lovecraftian homages fail to capture. 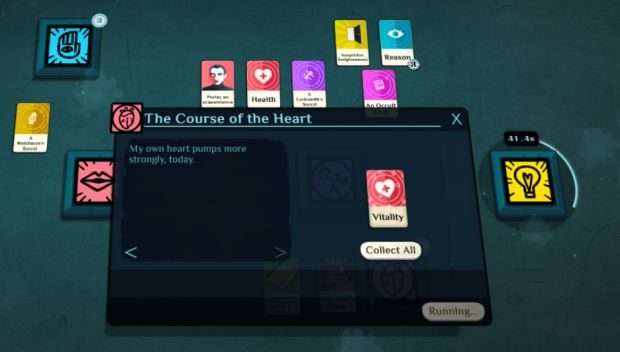 It helps greatly that it doesn’t confine itself to what Kennedy has called Lovecraft’s "cosmic nihilism". There’s a deep streak of romanticism in the writing here, more reminiscent of Lovecraft’s Lord Dunsany-inspired dream cycle than the doom-drenched Cthulhu mythos. But where Lovecraft tends to lampshade unknowable horrors with frustrating vagueness, Cult Sim’s twitter-sized vignettes meet them head on, transporting the player with sparkling prose. The game knows that Faustian bargains need to offer beauty as well as horror, otherwise, why bother? In doing so, it steers clear of goofy be-tentacled pastiche while never losing its sardonic playfulness.

It’s difficult to go into too much depth without spoiling the sense of discovery and surprise that makes it so intoxicating. Be prepared for longer play sessions than you might be expecting. The single-save feature and pleasingly rhythmic pace might lull you into a false sense of brevity, but there’s a great deal to uncover here. It’s also the first game in probably a decade that’s made me draw a map. Or, more accurately, scribbled notes detailing the results of various concoctions.  Not that it isn’t intuitive, just so vast that it’s almost overwhelming at first.

It’s often tempting, when a game hijacks our attention, to use terms like addictive, or compulsive. Cultist Simulator is something else. It’s seductive. It captures the looming threat of utter annihilation played against the transcendent bliss of unravelling mysteries wrapped in enigmas wrapped in other really, really weird shit. It’s excellent, put simply. The cosmic horror and occult subject matter isn’t just set dressing here - it’s expertly woven into the core of play, and the result is completely absorbing. Oh, and the music’s really good, too. I couldn’t find anywhere else to mention that so I’m putting it here, which conveniently saves me having to come up with a clever joke to end the review.

So, two Shoggoths walk into an opticians...