The Dauntless weapons roster is what the game lives and dies by (or at least, its inhabitants do); six weapons, all with unique designs, behaviours, focuses, and combos to master. From the Hammer to the Repeaters, from the Chain Blades to the War Pike, our Dauntless weapons guide will walk you through each one in turn, with practical tips and explanations of how each one excels in different situations. We'll also show you the inner workings of Dauntless's damage system, and how to apply stagger, break, and wound damage to further the Slayers' cause.

While you're here: this weapons and damage guide is just one part of our guides series on Dauntless, all of which you can peruse from our central Dauntless guide & tips hub. There you'll find in-depth beginner's explanations and useful tips, as well as links to every other part of our series, from the best Dauntless builds to strategies on defeating each of the Dauntless Behemoths, and much more.

Dauntless offers players six different types of weapons and four different ways of inflicting damage upon Behemoths (and that's not even mentioning elemental damage). So it's fair to say we've a lot of ground to cover here. If you're after a particular piece of info, then by all means use the links below to skip ahead. 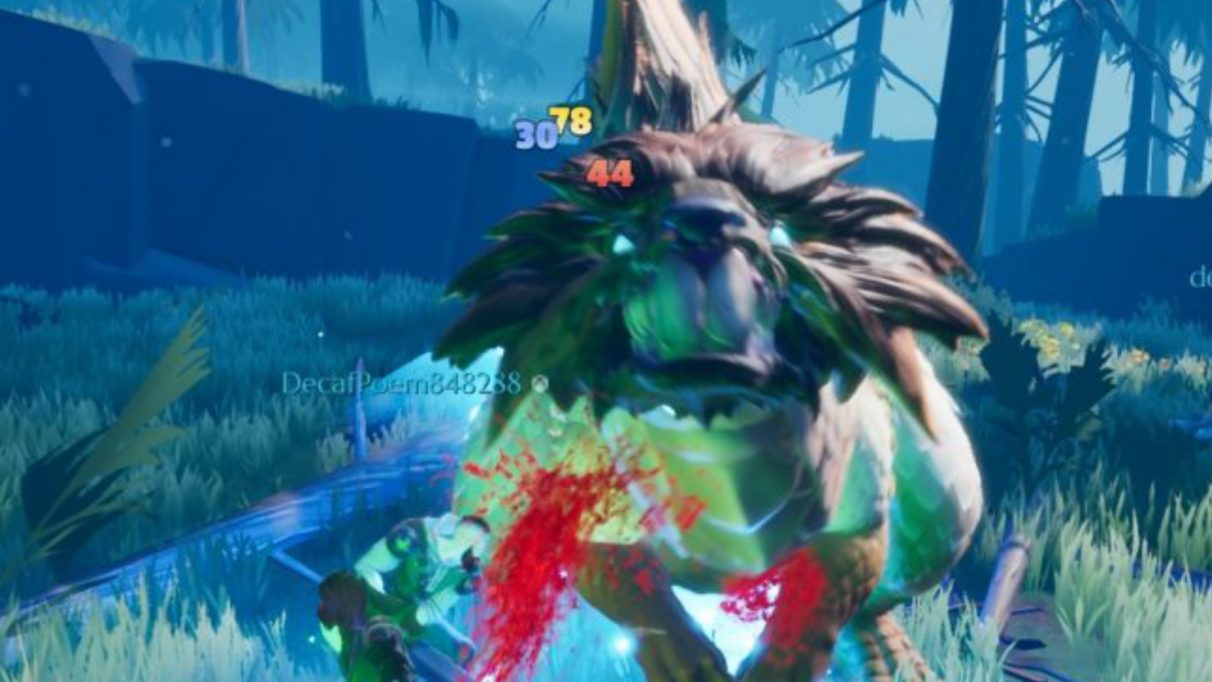 If you've seen or played any Dauntless, you'll likely have noticed the colourful display of damage values spewing out from every impact your weapon makes against a Behemoth's hide, like some marvellous sadistic fireworks display. But what you may not yet know is what each colour of damage value represents, and why it is important to pay attention to them.

You've also got the six Elements, which operate in a very predictable binary fashion to increase the raw damage you take or dish out: 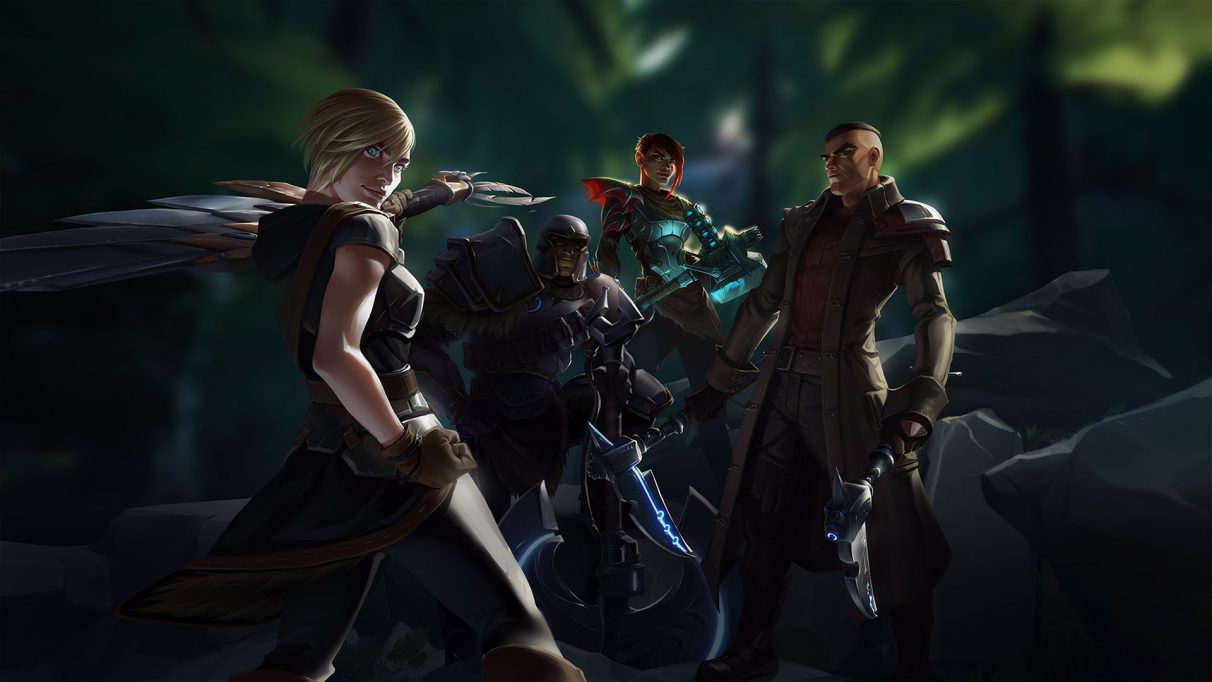 The best weapon in Dauntless?

As for the best Dauntless weapon... Well, there's a lot to take into account. And it holds that a decent player with satisfactory stats can solo any Behemoth in the game with any weapon. But, as we'll soon see, the different weapon types do have different leanings, without taking into account the various individual weapons and all their element types, unique benefits, and cell slots (for more info on Cells check out our Dauntless cells/perks guide).

As things stand, I'd say the Hammer has a slight edge over every other weapon, simply because it's so versatile once you know what you're doing, and it's so easy to stun-lock Behemoths with your massive crushing combos. I'd also throw the Sword into the ring, because it simply has no downsides. It's the jack-of-all-trades, master-of-none weapon of Dauntless, and if I were to stick to a single weapon type all the way through the game, the Sword would be my pick.

But each of the six have their own unique benefits that makes them more suited to certain situations than any other. Honestly, you should try to level up at least one weapon of each type, because aside from anything else, it just makes the game more interesting and fun than sticking to one or two weapon types.

Now let's take a look at each weapon type in turn, from their move sets and combos to their specials and mods. Expand the spoiler box at the bottom of each section for a full list of every weapon of that type in Dauntless. 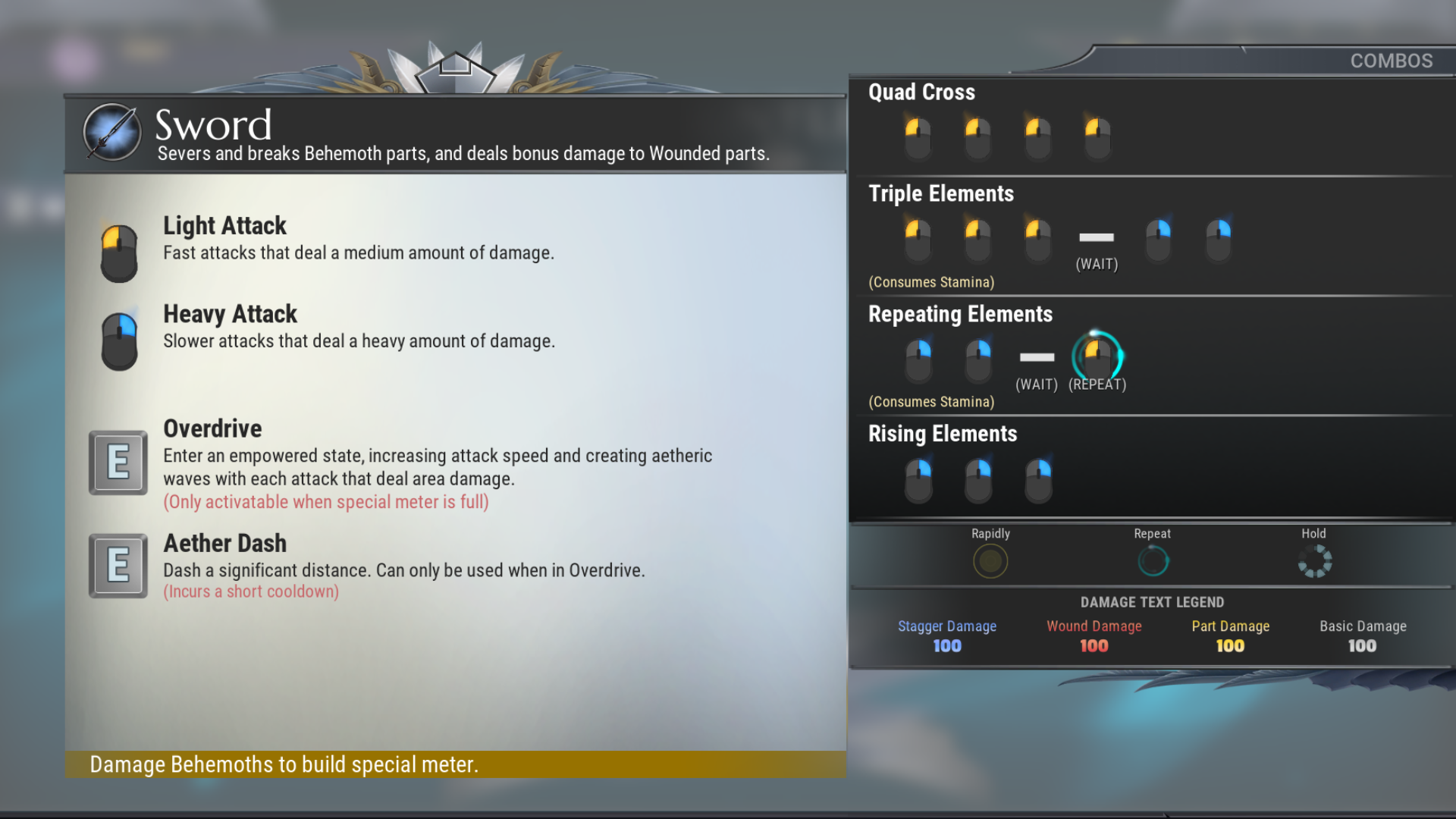 The Sword is an easy recommendation for any player just starting out as a Slayer - and the devs obviously agree, because this is the weapon you're supplied with for your very first Behemoth fight. My own personal take is that pretty much every other weapon is more interesting than the Sword; but regardless, it's a reliable weapon whose combos and animations strike a great balance between damage and mobility - something no other weapon can claim to do nearly as well.

The attacks and combos themselves are also pretty simple to get to grips with. You've got two super-simple combos, one for Light Attacks and one for Heavy Attacks; then two more combos for combining those attacks. The Specials are likewise very straightforward and easy to understand. You can also slide-attack with the Sword by jumping, then after the apex of the jump starting a Heavy Attack. You'll slide forward as you attack, which is great for gaining or closing a bit of distance as you need it.

The Sword is a great weapon for breaking parts, particularly if you're allied with a War Pike user (Slashing weapons like the Sword and Axe deal bonus Part and Wound damage); and it deals quick and painful damage while still allowing you to move in and out of danger very easily. 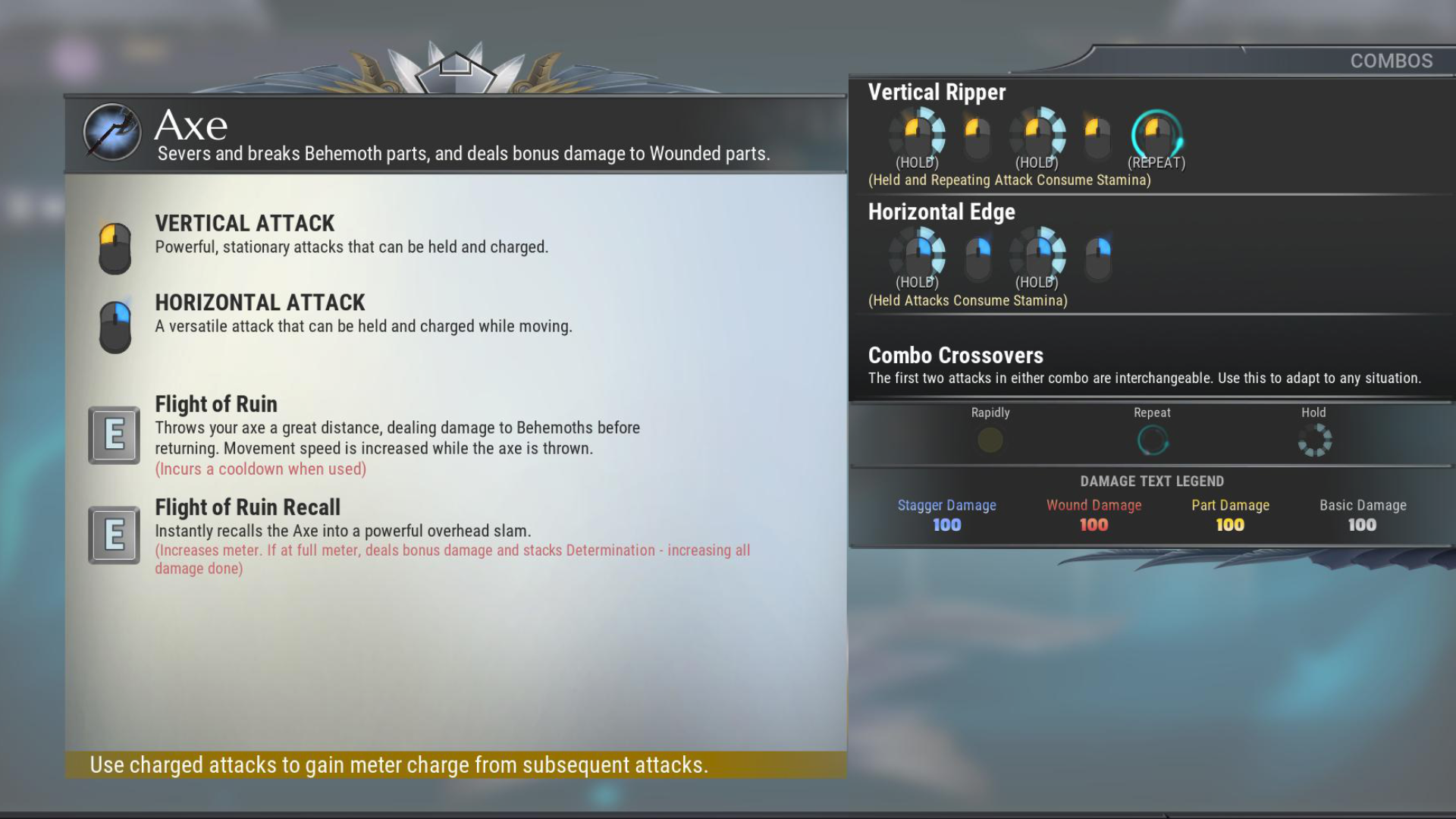 The Axe is a hard-hitting slashing weapon that is the Sword's only rival when it comes to breaking Behemoth Parts in record time. On the face of it, the Axe's attacks and combos are incredibly simple (and they are), simply using either Horizontal or Vertical Attacks in quick succession, alternating between charged and uncharged.

But there's a little more going on under the hood. Vertical attacks that are charged 3 times will grant you "Resolve", which allows you to shrug off Stagger effects for a short time. And any charged attack, Horizontal or Vertical, will grant you "Determination", which multiplies your damage - and get this: it can stack up to three times. That makes for stupendous damage potential per attack, which when directed at a specific point on a Behemoth will break parts quicker than anything else on the market.

Its Special Throw is also very fun and allows you to deal some extra damage at range before winding up for a great back overhead slam as the Axe comes back to you, Stormbreaker-style. You can even dodge the Axe to delay its return for a short time, which is useful for giving you that extra moment to line up the perfect attack on the enemy. 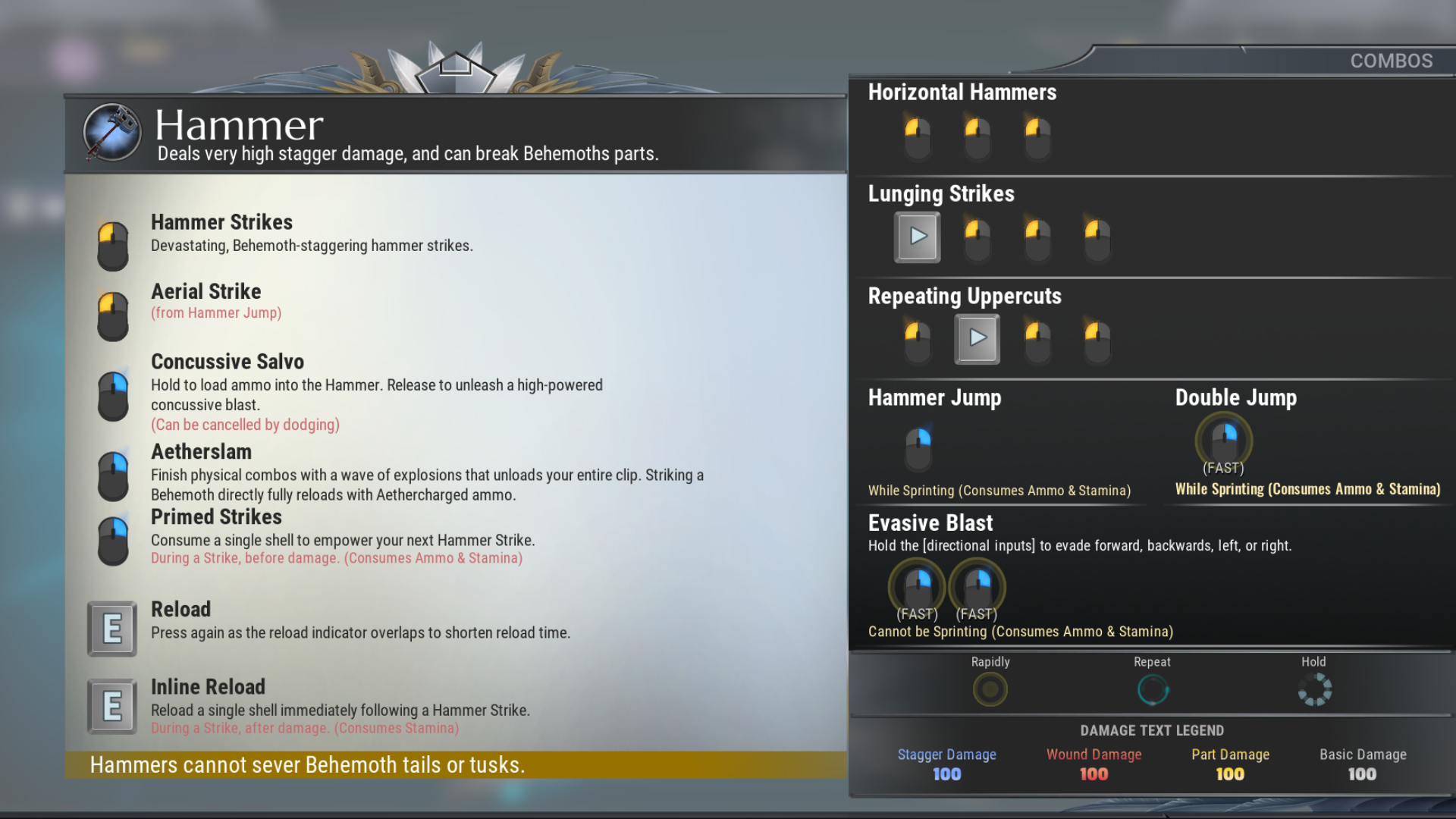 If any Dauntless weapon can lay a claim to being the outright best weapon, I would probably put the Hammer slightly above any other. It's a high-skill-ceiling weapon involving timed ammo reloads, charge attacks, Hammer Jumps, and all sorts of other crazy complexities; but when things start to click and you're able to use all these little quirks and tricks to help mitigate the Hammer's weighty and languorous attacks and recoveries, then you find yourself agreeing with me.

The thing about the Hammer is it's just incorrigible. Once you get started with a good combo which you should always finish with your bread-and-butter Aetherslam), odds are you'll often stagger or outright knockdown the Behemoth, allowing you to continue with further combos that stagger and break them even more, and so on. It's an awful, wonderful adventure in the power of stun-locks and well-timed attacks - and slide-attacks, too, because the Hammer makes good use of them just like the Sword does.

But as I said, it's a tricky weapon to get to grips with, far more so than the Sword or pretty much any other weapon to be honest. If you're not yet comfortable with your dodges and your timing (which is compounded when facing a new Behemoth), then it might be worth switching to a Sword, Chain Blades, or Axe, as they're all much more forgiving weapons. 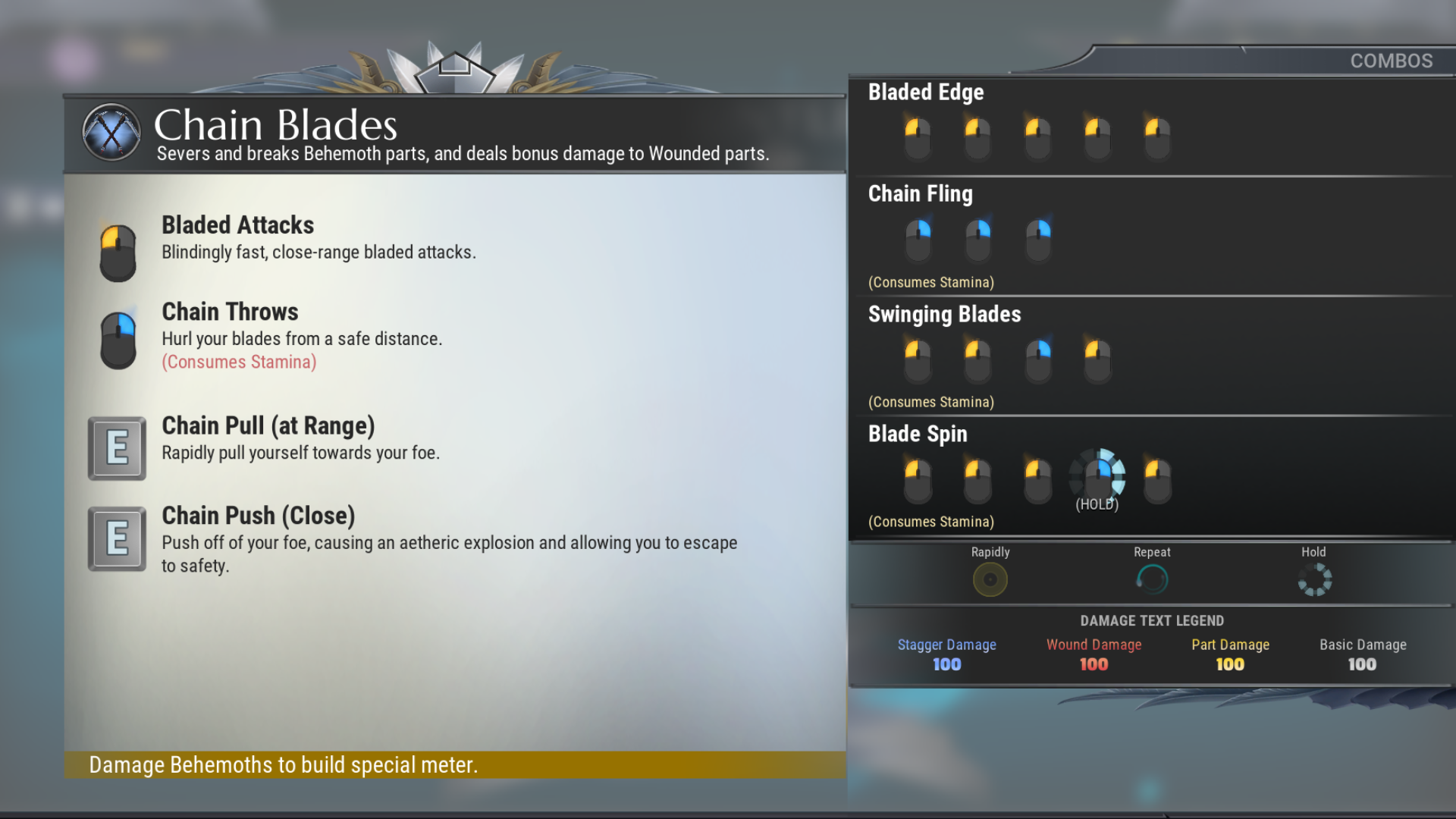 I love the Chain Blades. They're easy to learn, and you just feel like such a badass while using them. By far the fastest-attacking weapon in Dauntless, you can switch on the fly between Bladed Attacks (normal close-range strikes) and Chain Throws (longer-range attacks) and the Blade Spin combo trades your stamina for some outrageous damage over time - provided you aren't interrupted mid-spin.

The Chain Pull and Push specials are also amazingly useful in helping you to control the pace of a fight, allowing you to dodge attacks and close distances in the blink of an eye. And even without these specials, the Chain Blades' emphasis on mobility means your ordinary dodge becomes a veritable Blink ability. It's just so fast.

The downfall of Chain Blades is that they don't scale quite as well as some of the other weapons as time goes on. With the more dangerous Behemoths you really want a higher damage-per-hit than the Chain Blades ordinarily provide; but with the right Cells and the right choice of Chain Blades - and a fair amount of skill - you can dodge and weave and slice apart Behemoths, looking absolutely fantastic as you do so. 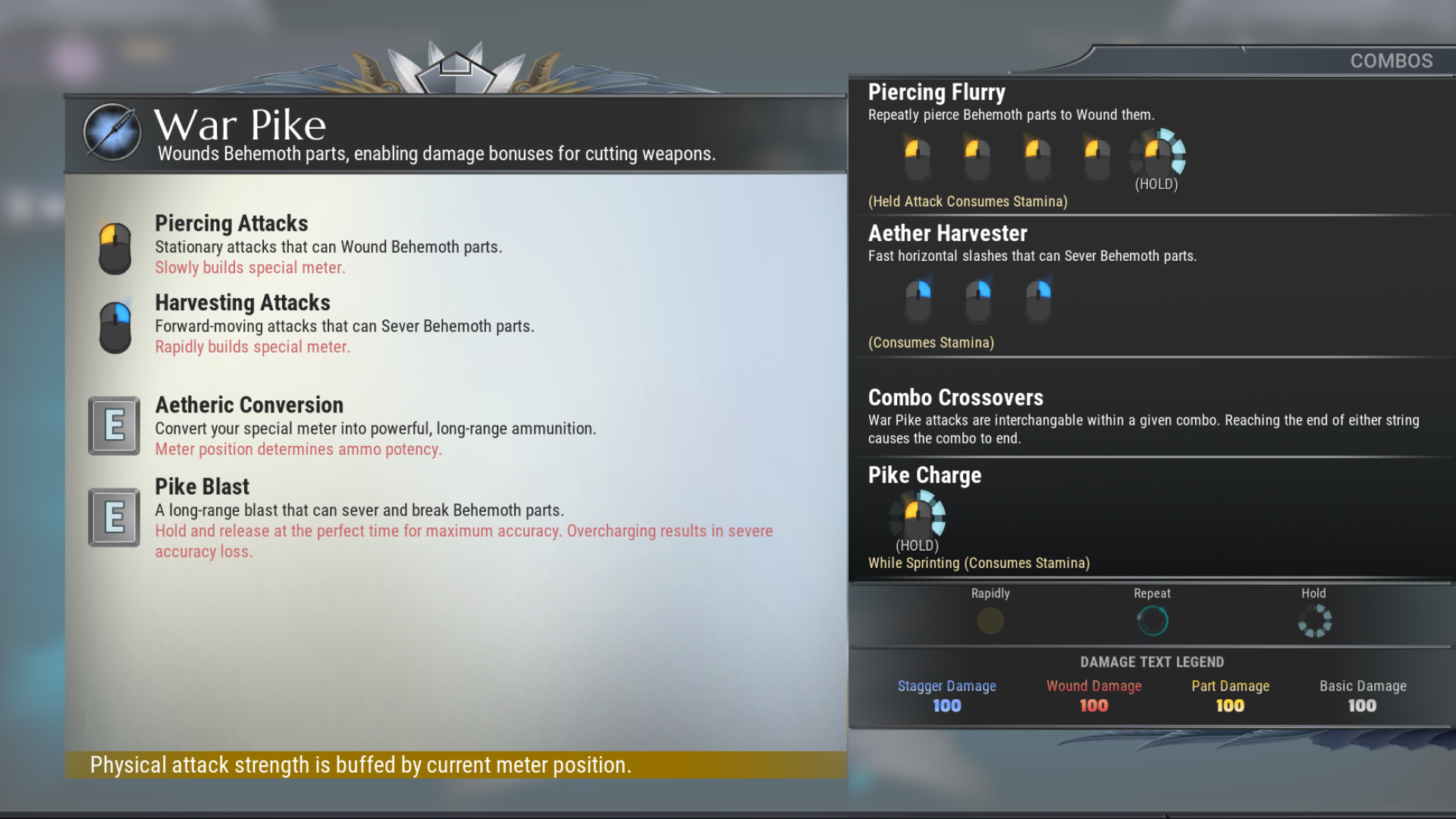 The War Pike is a fascinating and well-designed weapon type, providing a completely different focus to the other weapons with its unique natural ability to cause Wound damage to Behemoth parts. This makes it an excellent weapon when it comes to maximising the resources you yield from a fight, particularly in groups where you have friends with Swords or Axes who can whale away at the parts you wound.

Like the Hammer, the War Pike is another fairly complex weapon that you might bounce off at first after trying it out for a bit. I'd encourage you to stick with it. Effective use of the War Pike requires good use of Piercing Attacks to inflict Wounds, and Harvesting Attacks to fill your charge meter so you can unleash massive ranged Pike Blasts towards the enemy. Keep in mind also that these Pike Blasts have an optimum release time to ensure maximum accuracy (the moment the circle around your Pike contracts to nothing), so proper timing is essential.

But if you mess up the timing of your Pike Blast, never fear! You can simply dodge to cancel out of the charge-up, retaining your ammo for a future opportunity. 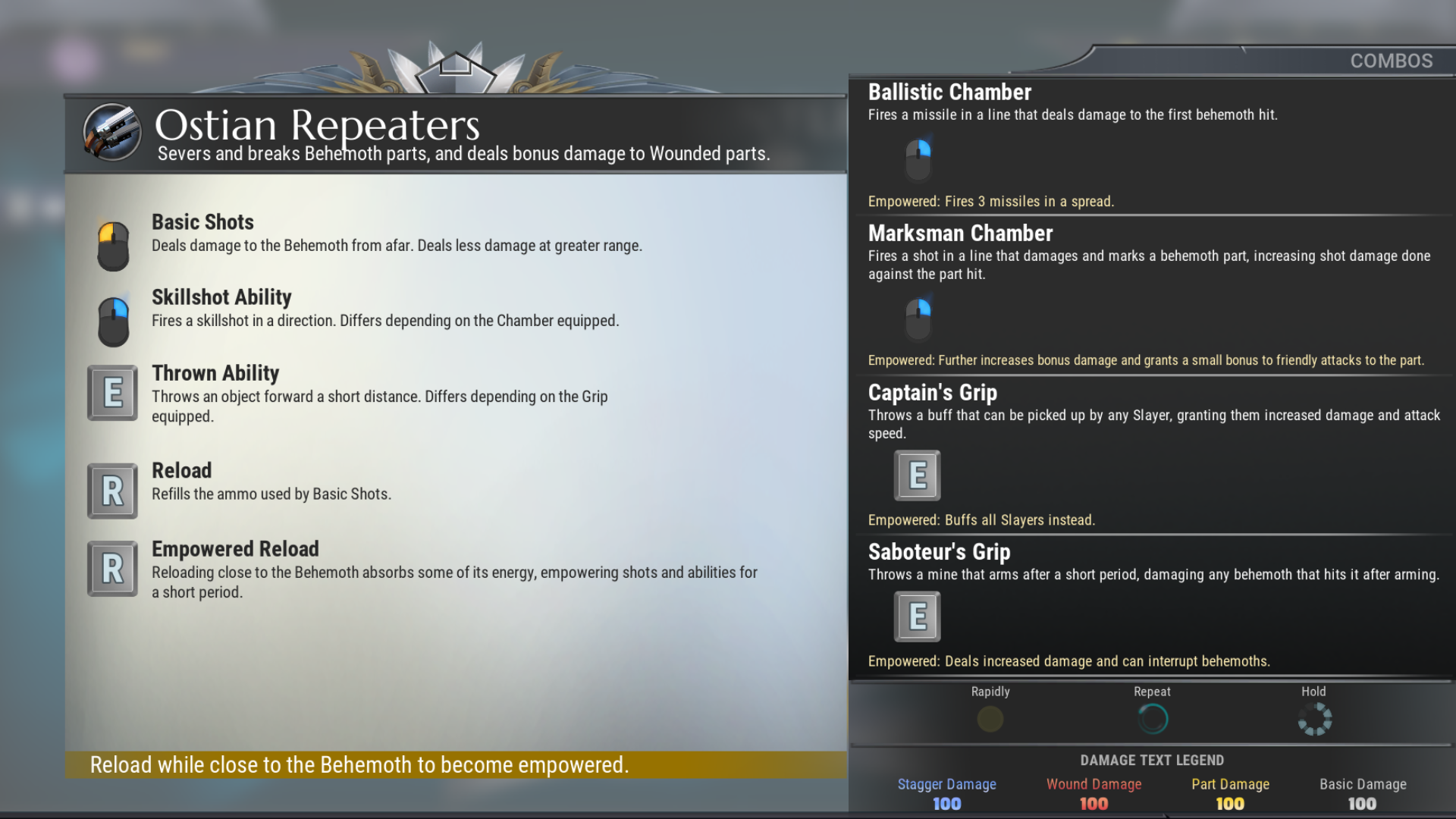 Yeah, I don't know either why they're classed as a Slashing weapon... but regardless, the Ostian Repeaters are far and away the most unusual of Dauntless weapons, and also the most customisable. The biggest mistake I see new players make with the Repeaters is to use it at long or medium range. Close, but no cigar. For the full power of the Repeaters to reveal themselves, you have to understand that this is a close-quarters weapon just like any of the other weapon types.

The main thing to keep an eye on with the Repeaters is the reticule: if it's white, you're too far away and you'll suffer from pretty stupendous damage dropoff (which is what prompts newer players to incorrectly proclaim that the Repeaters are rubbish). But once you get close to the Behemoth, your reticule will turn red, indicating maximum potential damage.

Even the basic shots of the Repeaters are nothing to be sniffed at, but combined with the fully customisable Skillshots, Mines, and the incredibly important Empowered Reloads (reloading close to the Behemoth makes all your attacks much more damaging for a time), you'll soon see why you misjudged the Repeaters. 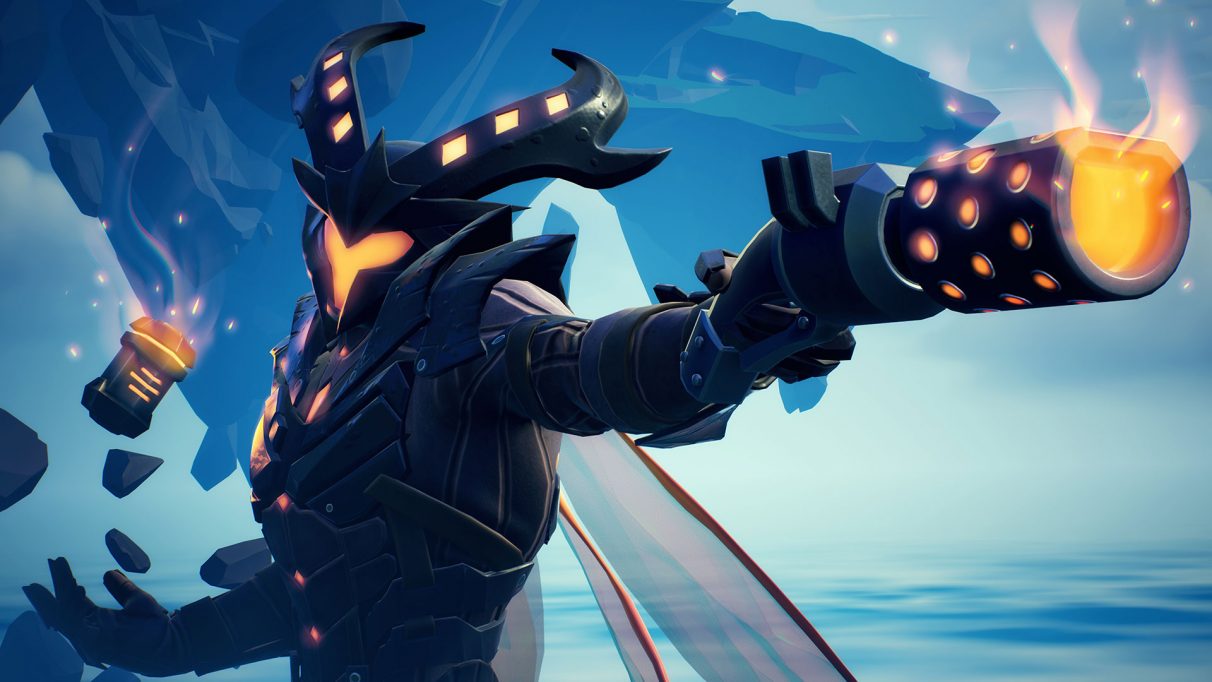 I think that's enough to get you started, at the very least. Hopefully you've learnt a few new things about how to inflict all sorts of pain upon the Behemoths you come up against during your quest as a Dauntless Slayer. Happy hunting, and be sure to check back here for all the latest stats and information.