The second and toughest of the two Radiant Behemoths in Dauntless is a cross between a snake and a praying mantis. But it's not the sickle-like claws you need to be wary of, it's the mystical nonsense that it can fire off at any time, or the prison it can encase you in. It's very easy to get overwhelmed by this nonsense, so read on for some tips for beating this tough boss.

This guide has the full tips and tricks to killing the Rezakiri boss in Dauntless. It also has the resource table for the Behemoth and how to obtain the resources for each part. 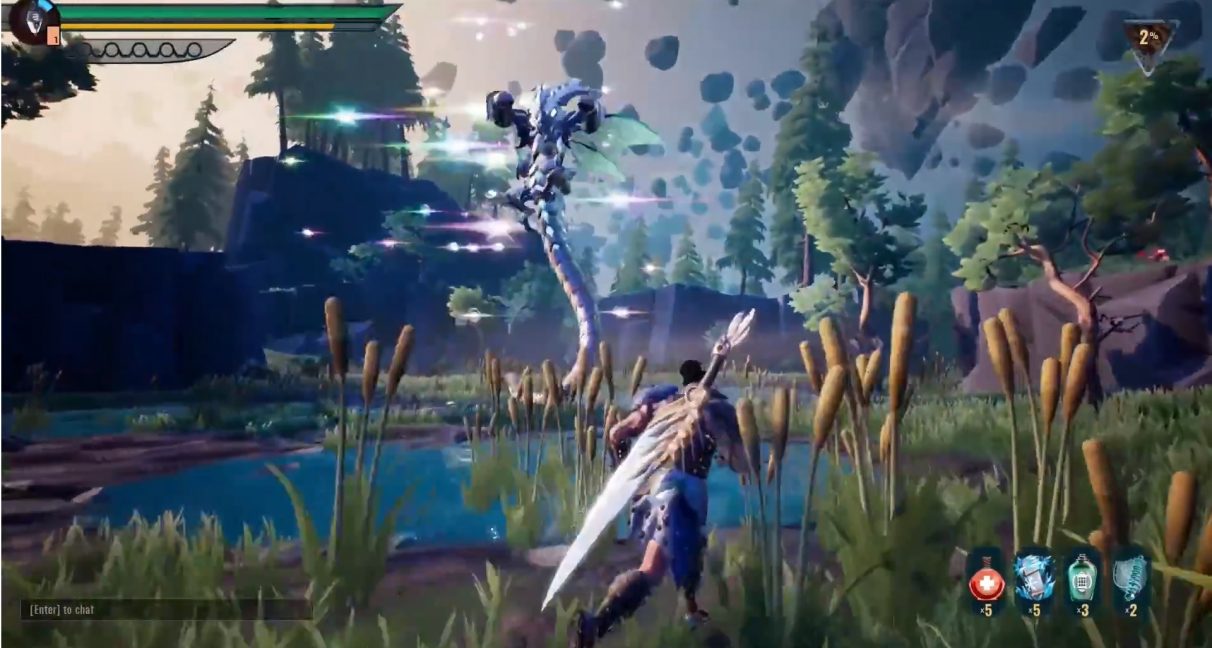 How to kill the Rezakiri

Rezakiri has a number of attacks that are hard to deal with. We'll begin with the melee attacks it has to dish out the pain. With the tail spin attack, you only need to dodge once in the opposite direction to the lash of the tail. The subsequent spins will not hurt you. If it ever rises up, it is going to try and slam its front into the ground on top of you. You can either dodge to the side or roll into it with the proper timing to get some cheeky hits in while it recovers. If you see it recoil and its wings fluttering, dodge into him as the charge attack comes incredibly quickly.

As a radiant foe, it can also shoot out glowing orbs as it moves forward. For this attack, it's best to keep far away and to the side where possible so that you're not caught by the projectiles. It'll also create some orbs by spinning on the spot, which will fan outwards. Dodge in between them and close the gap to get a few hits in. If the orbs appear in the air, they're going to dive in on you, so try to dodge as you're running towards the Rezakiri. The Rezakiri also can fire lasers. It'll shoot several at the ground, before bringing them up a little bit and spinning anti-clockwise. Roll out of the centre of the impact, before rolling back in as the lasers fan out, and you should avoid the damage. You'll need to roll once more when it slams into the ground after the lasers disappear.

When enraged or Aether-Charged, the Rezakiri will encase you inside a shield and attack with various different attacks. You can hit the barrier to shatter it, but focus on dodging attacks. The orbs will actually damage the "rainbow prison", so be mindful of when it shatters so that you can be ready to dodge any orbs. It also has two new laser attacks. The single beam dirIt can fire off a single laser which splits into a vertically spinning death trap, so dodge from side to side to avoid this, timing it so you are reacting to the one in front of the laser that's about to hit you. The double lasers are identical, but there are two lasers to dodge rather than one.

Rezakiri is tough to deal with and there are some things to note about its different states. While Aether-Charged - indicated by the glowing limbs, the only other difference is that it produces a lot more orbs with any of the orb attacks. It can enter it in two ways, either by slamming down, or by spinning while enraged in the air and creating a flash. The latter will also encase you inside the prison, be ready to bring down that pesky barrier. Finally, it has some desperation attacks it will execute when a body part is broken, such as swiping with its scythe-like claws, or swinging its tail.

Before we go, here are the resources you can obtain for slaying and damaging the Rezakiri. These are a 100% chance to obtain an item, as long as you break specific parts, but there are rarities for each one as explained below:

That's it for our Rezakiri guide, but we'll have more boss guides coming soon. For more on what you can build with the Rezakiri resources, go to our Dauntless weapons and or Dauntless armor guides respectively.