Moira landed on the Overwatch servers last month, finally bringing an end to the era of Mercy misery. She’s just the hit that the game needed: an interesting, easy to play support character that’s (very almost) as viable in competitive play as Mercy. She’s managed to lure me away from my usual spot as Genji, which is no small feat when cyber-ninjaring is the main reason I keep coming back to Overwatch.

So, what’s in Moira’s bag of tricks?

She’s similar to Ana in that she can play a more offensive role than most supports, though I have to keep reminding myself that my priority should still be protecting and healing my team rather than tearing through my opponents.

Although she doesn’t do much damage with her right click, it has an incredible range and heals you whenever you’re doing damage. It’s like Zarya’s beam in that you can just hold it down without any consequence - even more so in fact, as you don’t have to worry about giving your position away. There’s no need for fine aiming, either - which makes it a doddle to deal with fast characters like Tracer. My only complaint is that it can be a little hard to tell when someone is in range at first, both for her healing and damaging grasp.

Her first ability is a teleport on a short 6 second cooldown, which can be great when you want to chase down a low health character - or if you’re playing more sensibly, to escape a dangerous situation. Play more sensibly still and you can save it for when a distant low-health teammate is in trouble. 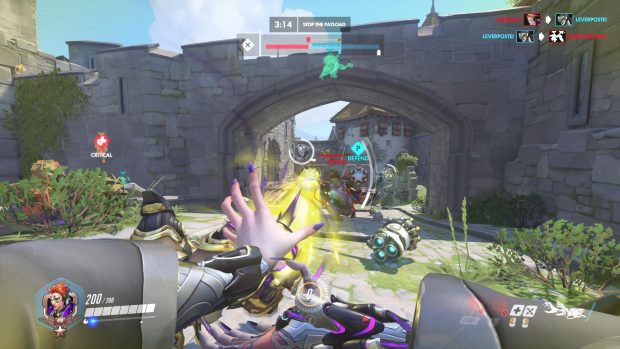 As fond as I am of her teleport, and teleporting in general, Moira’s second ability is the real reason behind why I'm having so much fun with her. It’s an orb that can be fired in two forms that ping-pongs across the map, ricocheting around corners and either healing or damaging anyone that comes near it. If you can lure your opponents into a corridor, firing an orb into it is an easy way to turn that area into a death zone. The orb only actually does 200 points of damage before it disappears, though I’ve found groups will often make themselves vulnerable as they try to avoid it anyway.

At times, getting a kill with the orb can feel like landing a trick snooker shot. It travels for an obscenely long 10 seconds: I’ve had a lot of success with firing it through the corridors on the first stage of Route 66. 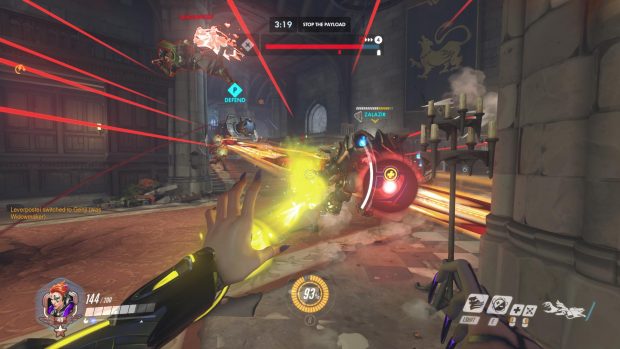 Her ultimate, coalescence, seems underwhelming until you realise that it’s far better at healing than damaging. It’s a swirling beam that reminds me of a horizontal barber-shop pillar. While it only puts out as much damage as an uncharged Zarya beam, it heals 140 health a second to anyone that stands in it. True, it’s not as impactful as Zenyatta’s Transcendence or Lucio’s Sound Barrier, but it charges much more quickly.

This is a good opportunity for me to tell you about how Blizzard have improved the highlight system. I hadn’t noticed, but last July there was an update that lets you save the last 12 seconds of play by pressing F9, which you can then export as a video clip. I used that to capture this bit of Moira play, where her abilities come together rather neatly.

I’ve only talked about her abilities so far, but I also love Moira’s aesthetic... and her general demeanor. Call the whole ‘life with one hand, death with the other’ gimmick hackneyed if you like, but it works. One hand is a withered evil looking claw, while the other is immaculately groomed and adorned with nail polish.

Her voice lines after respawning are strangely encouraging. “Perhaps a new methodology is required”, she’ll say as I run out of the spawn area after diving too hard into the enemy team. She’s right, and there have been times where I’ve altered my approach based on those cool, reflective lines of dialogue. She’s like a less infuriating Zenyatta.

Plus, you can dress her up like David Bowie. 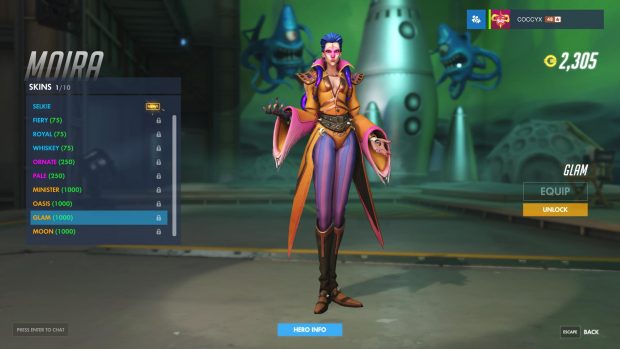 I’ll tell you what, she’s a right pain for Genji though. The damage from both her right click and biotic orb can’t be deflected, making her a decent counter to him.

Which sucks, because Genji’s the main reason I keep coming back to Overwatch. I love how mobile and tricksy he is - some of my favourite moments from this or any other game have been when I've successfully scurried up a wall to evade my pursuers when I'm on a scrap of health. I’d argue that he’s the most unique character in a multiplayer shooter since the spy from TF2.

I love the psychology behind his deflect skill, too - you need to try and get into other players heads and work out when you would attack, then respond with a deflect at just the right moment. Moira might be the most fun I’ve had with a healer, but I still look on in envy when a Gengi gets play of the game.

Maybe I should have written an ode to Genji instead.