Feeling peckish, halflings? Bay 12 Games are still stirring away at Dwarf Fortress' new and improved Steam version, but they've popped out of the kitchen a mo to give us a taste of the sprawling mountainfolk sim's spruced up new interface - turning a simple stone room into a temple to meal deal sandwiches with a streamlined new painting tool.

We've already had a nice gander at Dwarf Fortress' spruced-up tilesets. But graphical abstraction was only a part of the venerable sim's intimidating complexity. In a Steam Update posted this week, the devs ran through a few of the interface changes coming with the premium edition's eased-up dungeon-building.

To do so, Dwarf Fortress co-creator Tarn Adams begins with a cosy little cavern, using a simple painting tool to designate it as a chill hang-out spot for Dwarves. In this case, Tarn decides to call this a temple, a holy site dedicated to the worship of the human god of trade, wealth and hospitality, Utag Loafivory. At this point, the game decides to give the room the name "The Sanctum of Lunch". Tasty!

The rest of the page goes into some of the peculiarities of this zoning system. Multiple zones can be painted over each other, giving spaces multiple roles, and can be disabled, deleted, resized and repainted at any time during play. There's also a sneak peek at an honest-to-god tooltip, something Tarn says will become more and more commonplace as development continues. 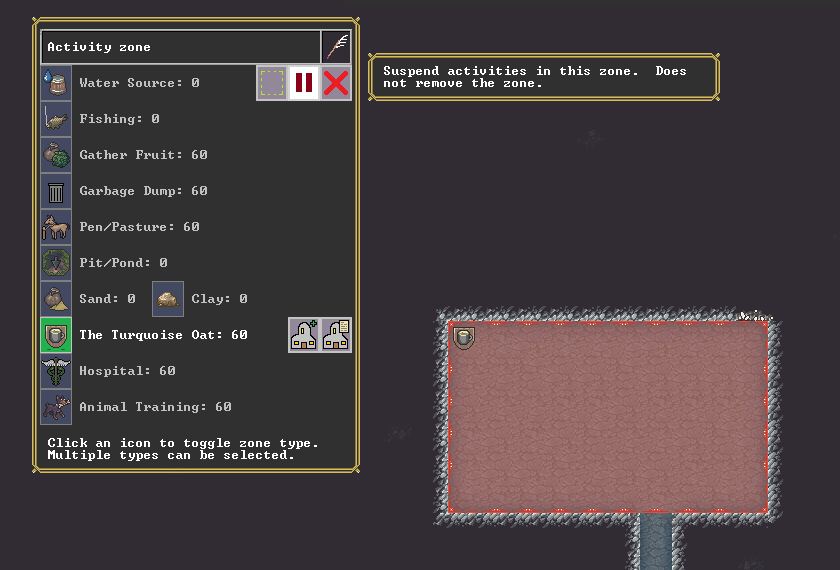 What the page doesn't explain is where all that lunch meat is coming from - though I've a hunch Nate's semi-legal underground zoo may have something to do with it. Grilled werepanda, anyone?

Back in the real world, PAX X EGX just kicked off, and Tarn will be popping in for a late-night session at 10pm BST, followed by a panel on procedural generation at 11pm on Tuesday 15th. This new edition of Dwarf Fortress still doesn't have even a hint at a release date, but you can keep up with developments over on its Steam and Itch pages.