“I came in like a wrecking ball,” sang Miley Cyrus. “Yeah, I just closed my eyes and swung.”

She was, of course, talking about Overwatch’s playable hamster, Hammond, referred to as “Wrecking Ball” in Blizzard’s multiplayer shooter thanks to his control of a spherical, grappling-hook-equipped mech.

Quite how Ms. Cyrus knew in 2013 that Blizzard would introduce a hyper-intelligent hamster to Overwatch, let alone what “Overwatch” was, isn’t clear, but she certainly chose the right character to write an ode for. Wrecking Ball has swung his way right to the top of my affections, becoming by far my favourite character to play since his introduction last July.

He’s cute and fuzzy, sure, and yes, he reminds me of my childhood hamster (RIP Nibbles), but I love Hammond most for his wild mobility. In its default form, his mech is a waddling four-legged thing, complete with quad assault cannons, but a press of left shift turns it into the eponymous ball. In ball mode, Hammond can’t shoot his main weapons, but he can fire a grappling hook, allowing him to latch on to walls and ceilings and harness his momentum to fly over the heads of enemy teams.

Or fly into their heads. Get up enough speed in ball mode and Hammond’s mech starts to glow, like a spaceship crashing back through the atmosphere. Hit an enemy hero while Hammond’s at this velocity and he’ll knock them backwards, damaging them in the process. That in itself is a thrill, but the ball-handling hamster can go one further: press ctrl while he’s up in the sky and he’ll slam his mech down, creating a mini shockwave that launches nearby foes into the air. 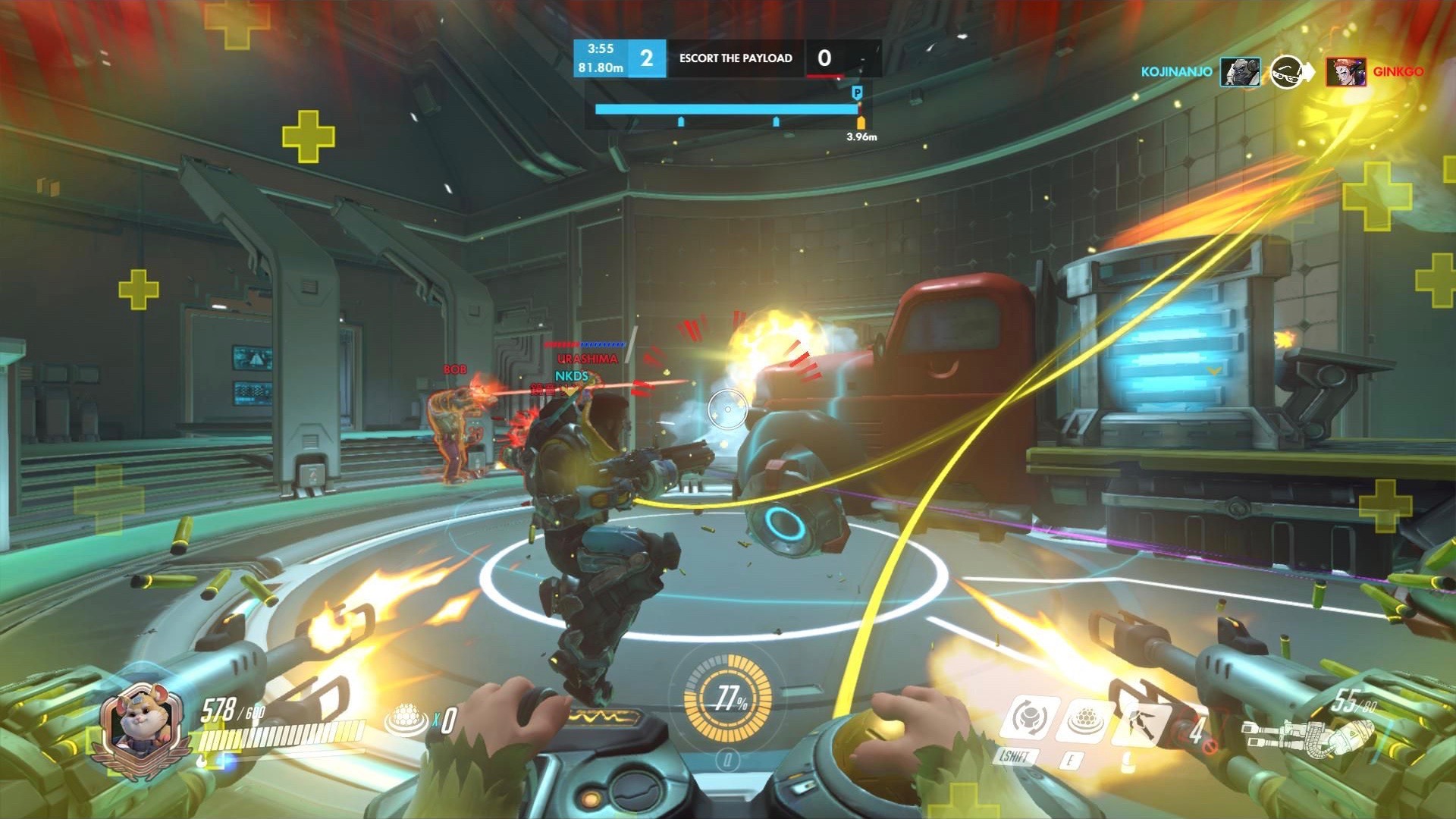 Combining these skills feels fantastic, letting you swing through clusters of enemies, bounce them up for teammates to shoot, and then careen around a corner to safety. I started to look forward to the kind of redoubts defending teams would cook up, seeing Reinhardt’s shields and Torbjorn’s turrets less as obstacles, and more as things I hadn’t smashed my ball into yet. He’s particularly perfect for control maps, where players fight over specific patches of turf, and clearly drawn battle lines can be punched straight through.

I had a lot of fun on the recently-added Busan, a built-up South Korean seaside city, whose tall buildings provide the height necessary for Wrecking Ball to get the drop on clusters of enemies. When I needed to go on the defensive, I latched my hook onto a central pillar in the control zone, daring opponents to capture it back as I whirled around like the world’s cutest threshing machine. Unlike escort maps, in which the payload is constantly moving, control maps like Busan let me develop favoured routes, building lines of attack and escape vectors.

Hitting these perfectly confers a sense of stylishness in movement that most shooters lack, but that Overwatch — with characters like Lucio and Tracer, as well as Wrecking Ball himself — has continued to explore. That’s a good thing, because as a pure shooter, I was less enamoured with Wrecking Ball. The little hamster’s cannons are powerful at close range, but as with a lot of Overwatch’s guns they feel a little piffly to shoot. That, plus the fact that the battlefield is often full of Tracers, Sombras, and other hard-to-hit characters, meant that I preferred to play Hammond almost exclusively in roll mode. Ball, as I understand the Americans say, is life. 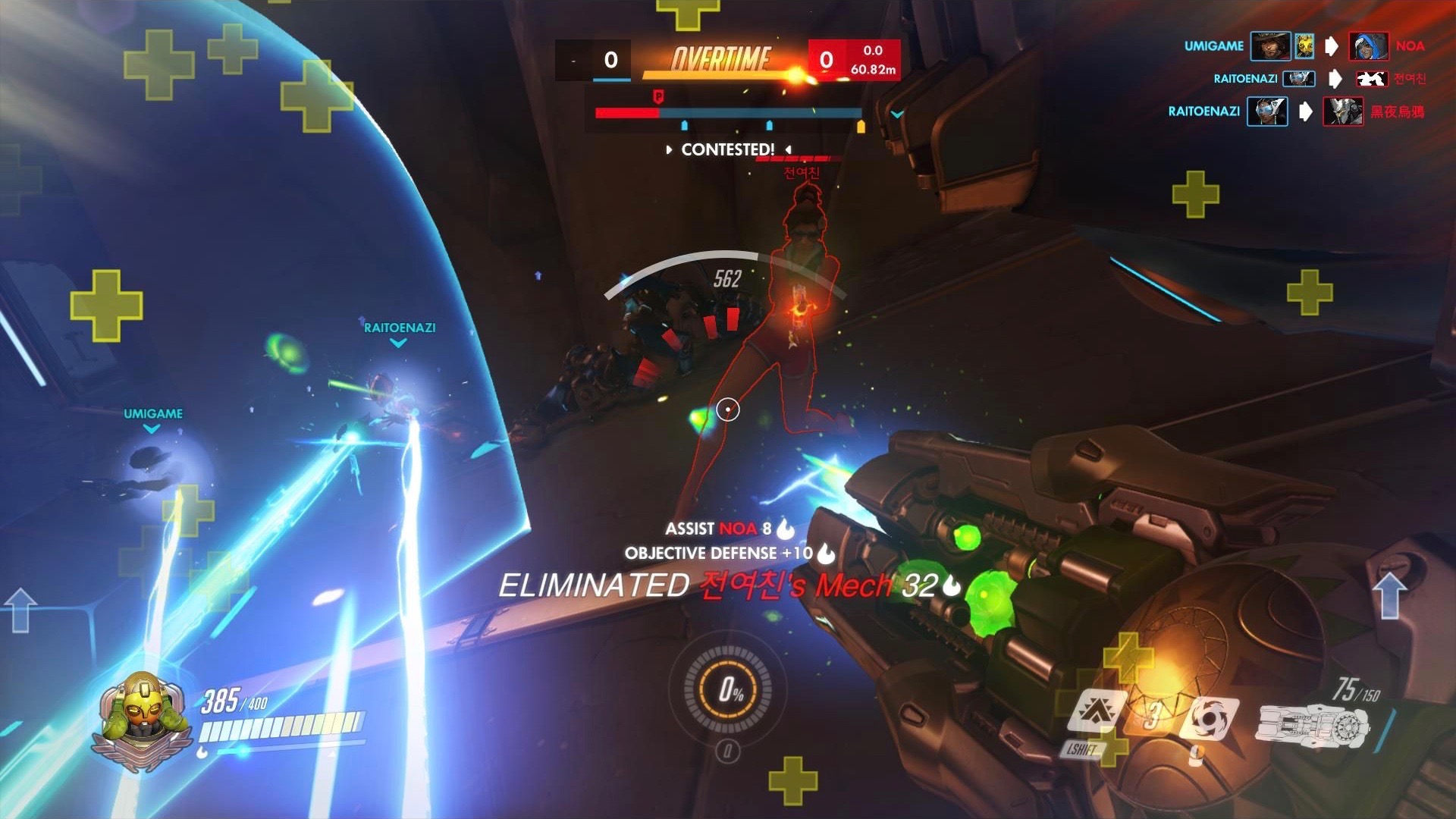 Ashe, on the other hand, is almost all about shooting people. Introduced last November as the eighth new hero since the game’s launch, she comes packing two nasty sidearms: a rifle that can knock out one of Overwatch’s flimsier heroes with a single headshot, and a shotgun that sends both Ashe and her target hurtling backwards when fired. She’s also got a stick of dynamite that she can lob at enemies, just to complete the old west aesthetic, but I’m far more into her ultimate ability. Press Q and Ashe calls in B.O.B.: a cowboy robot protector with the body (and handsome moustache) of a metal Victorian strongman.

B.O.B. is a brilliant ultimate, launching straight forward from wherever he’s aimed, bashing enemies out of the way until he reaches a stopping point and opens fire with wrist-mounted cannons. But as it stands, despite Blizzard depicting the two of them together in official trailers, Ashe players only get to see B.O.B a few times a game, when her ultimate builds up and he’s available to be called in and launched into a ruckus. Without her robot buddy, Ashe is just another sniper, albeit one who functions best at mid range: invariably useful in the hands of someone with decent aim, but less of a draw for new and returning players than a talking hamster in a high-flying death ball.

Baptiste, too, wasn’t particularly inspiring on my first play. The Haitian combat medic is Overwatch’s newest introduction, and comes with a burst-fire assault rifle and an area-of-effect heal that make him seem like a transplant from a much more po-faced shooter. But Baptiste’s other key skill — an invulnerability field that preserves a chunk of health for any teammates nearby — makes him a lot more enjoyable, and allows for some real hero moments.

For me, he was the difference between won and lost games a number of times, his invulnerability field keeping a defensive core of Reinhardt and Junkrat alive on Hanamura’s last capture point, or extending a push for Paris’ first objectives by giving a friendly Roadhog the time to down his health juice out in the open. Overwatch’s new endorsement system codifies these moments, allowing players to give virtual fistbumps to quick thinkers who kept them alive or cleared their path. I rarely win play of the game or appear on the end-of-game rollcall for damage done, but as Baptiste, I got a slew of “good teammate” commendations, even on competitive mode, where praise was previously hard to come by. 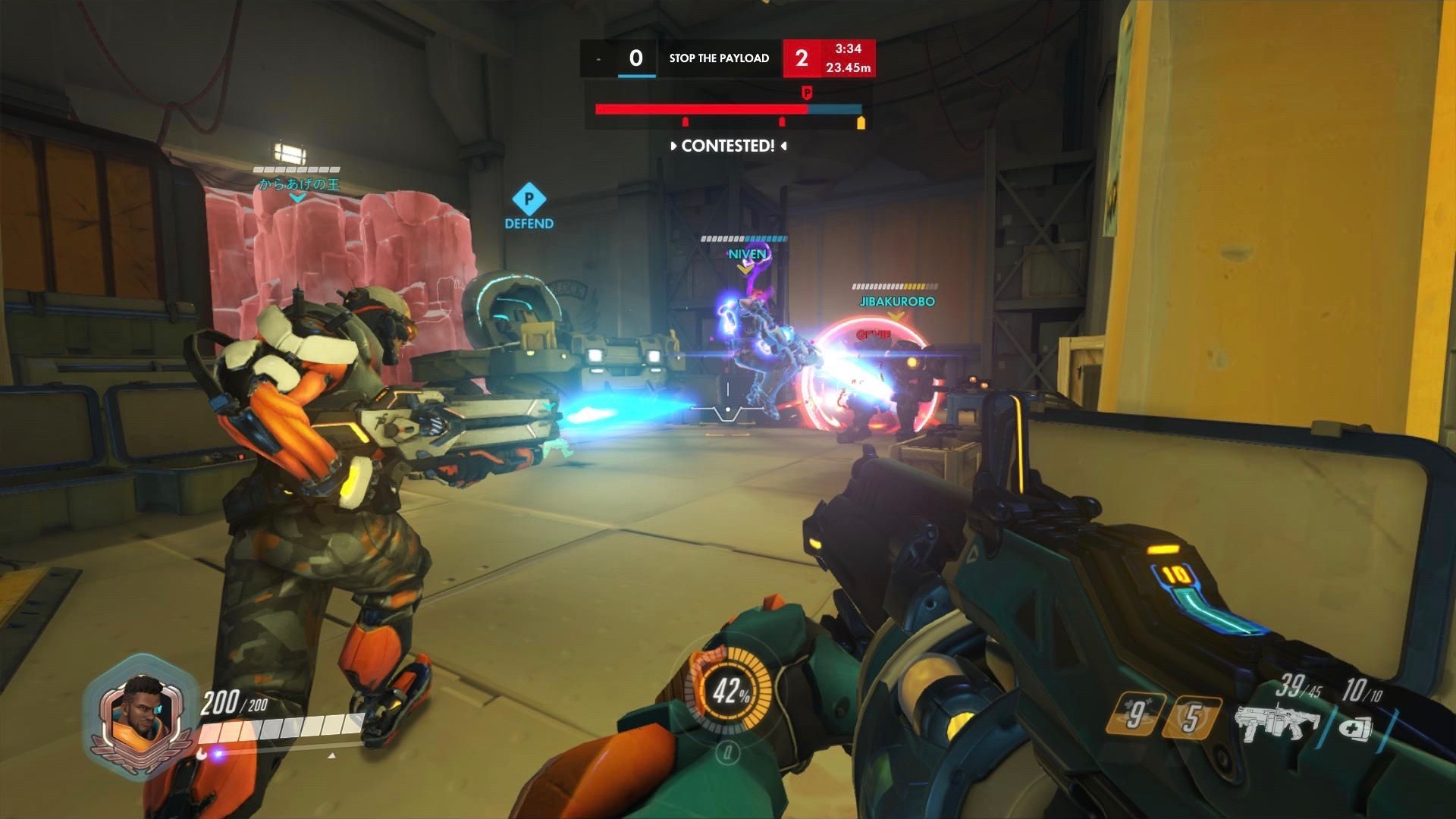 Between endorsements, play-of-the-games, and other commendation systems, Overwatch seems to spend more time bigging up its players for successes than letting players shoot each other down for their perceived failures. It’s a nice shift from games like Dota 2, where mistakes are immediately obvious and analysed by teammates, and it may have helped the reduction in toxic behaviour that Blizzard says it has recorded, but that’s not to say that competitive Overwatch is an entirely detoxified place. While most of my quick play matches were quiet, I had to report three separate players for racist hate speech during my first placement game. Blizzard still needs to do more to curb racist, sexist, and homophobic abuse from its players, including making it clear exactly how these reports are acted upon.

The rest of my placement matches were devoid of direct negativity, but while I appreciated the quiet, it didn’t help me do much better at the game, where I was ranked squarely in the silver skill category. In a bid to raise my game, I could turn to the new replay mode, added to test servers this month, and see immediately the kinds of things I was doing wrong, but I think I know what the prime culprit would be. (Namely, rolling straight into combat as Wrecking Ball without waiting for my team, screeching Miley Cyrus like a modern-day Leeroy Jenkins.) After some dabbling with the system, I can already see how more time with replays could make me a much better Overwatch player, and give me a framework to start actually climbing the ranks, should I have the time to dedicate to careful study.

Overwatch also provides a surfeit of pros to emulate, too. Blizzard’s Overwatch League is a gold standard in esports presentation, shading closest to the traditional sport model in its lineup of city-based teams, its league schedule, its intra-team transfer of players, and the hefty prize money involved. First-person shooters haven’t traditionally been the easiest games to spectate for esports neophytes, but the Overwatch League’s slick presentation and growing sense of history have made it one of the best ways to watch other people play games. 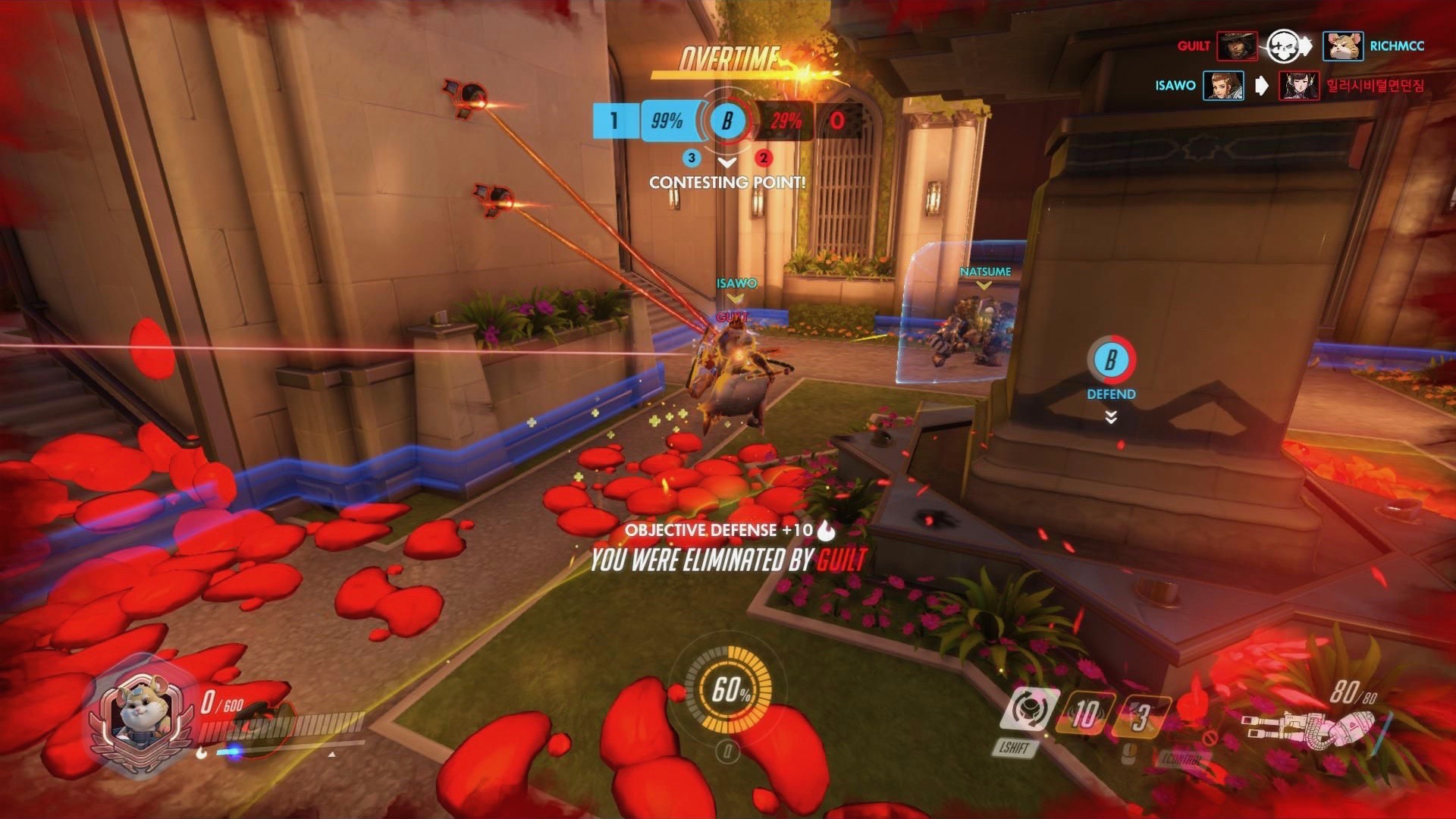 That professional framework filters down into amateur play, too. Team compositions are influenced by pro players, as seen with the proliferation of slow-moving, high health “Goats” teams dominated by tanks and healers. Even if these specific compositions don’t actually reach the lower skill rankings, where solo play is common and communication is patchy, their existence at the pro level colours the fan’s viewpoint of what the current metagame is. This has forced Blizzard to mobilise in a bid to shake up the meta, making regular changes to abilities and other variables.

They’ve also made more sweeping changes to characters, too, in a bid to bring them in line with the way the game is trending. Beardy mechanic Torbjorn’s had a big shift. His turret no longer needs upgrading, taking him further from his spiritual predecessor, Team Fortress 2’s engineer. His ultimate has been tweaked, too. Where before it saw the little man beef himself up through his righteous anger, it now lets him spew molten metal, allowing him to block off choke points and other key areas of the map. It’s a solid change, in keeping with both his defensive leanings, and his yelp of “molten cooore!” on ultimate activation.

Symmetra’s changes, however, feel less useful. Always out of place as a support character who couldn’t heal, Blizzard made the call to reclassify her as a “damage” hero, changing her teleporter to have immediate effect and operate over a shorter range, and making her turrets launchable, rather than placeable entities. Neither shift has really clarified exactly what Symmetra is for, though, and by removing the auto aim on her primary weapon, she’s only become harder to play effectively: too flimsy to stand up to sustained assault, and not powerful enough to focus down a single target outside of perfect conditions. Extensive practice may make her more dangerous in the right hands, but that practice is made harder when the community has already turned against her, counting her inclusion in competitive lineups as something of a wasted pick. Symmetra’s already been back to the drawing board once, but it feels like she’s in need of another drastic rework.

If Blizzard keep up their pace of updates, she should get it soon enough. Overwatch’s development team have had to be quick to react to major imbalances for the professional scene, but they’ve also backed up this firefighting with the addition of fun new characters, maps, casual modes and — through replays, trial weeks, and other additions — made it easier for players to get better. As a game, Overwatch is better to play now than it has been before. That only makes it more of a disappointment that Blizzard hasn’t yet been able to fully address the community toxicity that comes along with it.