Those familiar with Monster Hunter will know that Nargacuga is a returning creature in Monster Hunter World Iceborne. Its bat-like features make it one of the more striking looking monsters. It also has a really bad temper and has a rather edgy way of showing just how bad tempered it is, by lighting up its red eye shadow.

Our Monster Hunter World Iceborne Nargacuga guide will explain the strategies for defeating the Nargacuga, detail all of its weaknesses and resistances, and show the loot table for all the items you can get for defeating this beast. 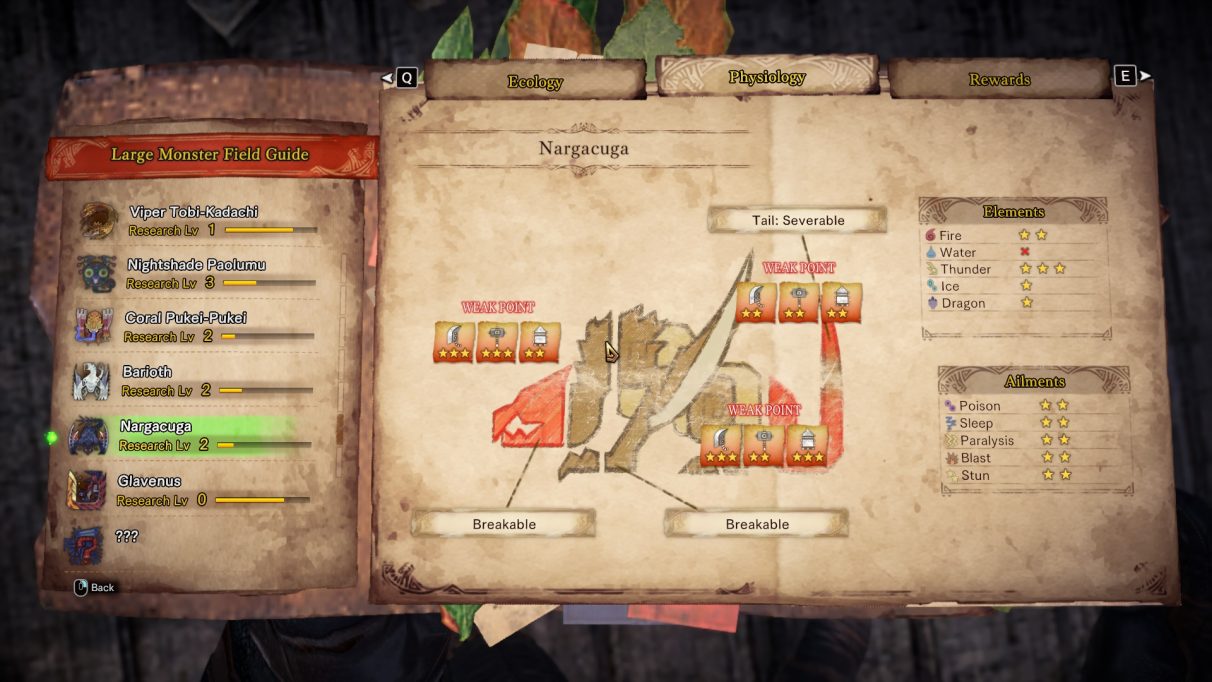 Fighting this monster requires a little bit of planning when it comes to weaponry. Firstly, you should be prioritising bringing in either weapons that have the thunder element or those that include ailments. It's not immediately obvious what the Nargacuga is resistant to, so just make sure you don't bring in water-based weapons. You could theoretically use fire if you're in a pinch, but you'll get a bit more mileage from ailment-based weapons.

The Nargacuga has a few weapon types it is a bit more resistant to than others. If you can, bring in bladed weapons into the fight. I'd also highly recommend at this point bringing in the Vitality Mantle and the Temporal Mantle, as you'll want to be up close to the bat-beast, wailing away at its breakable face, tail, and front claws. As for the weak points, the tail, face, and its rump are the places you can hit Nargacuga for the most damage. 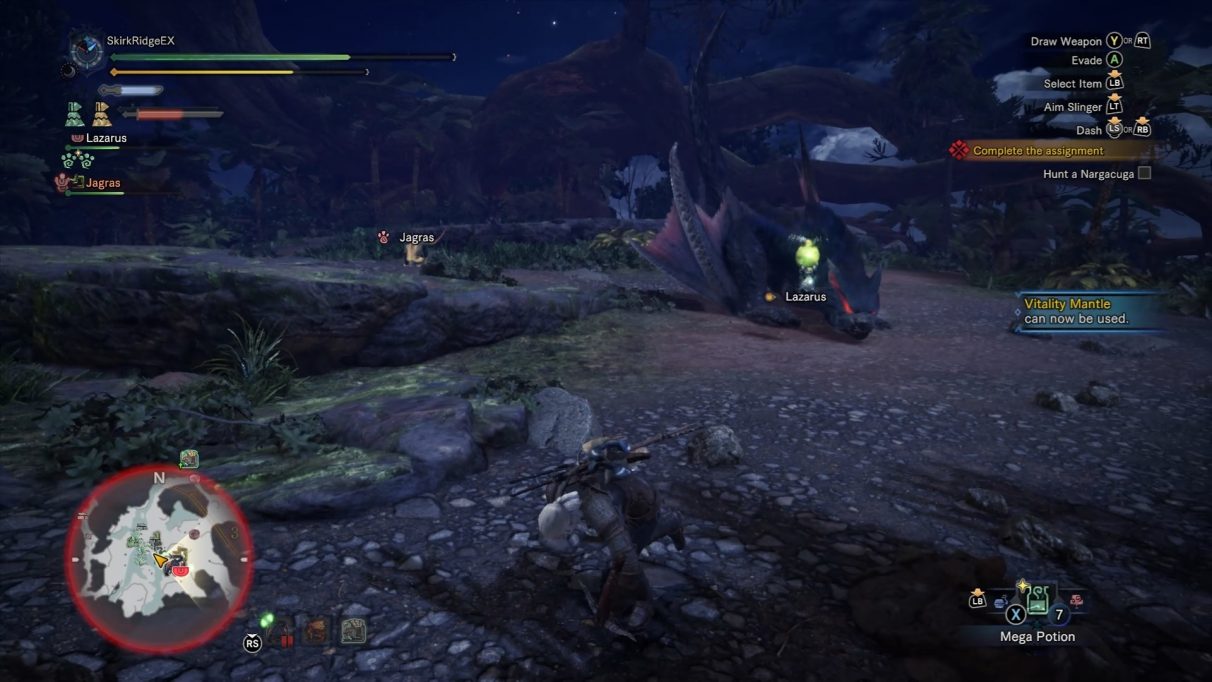 How to hunt Nargacuga

Believe it or not, the best way to tackle the Nargacuga is to get as close to it as you physically can. Given just how savage it is and how much it darts around, this is far easier said than done. Several attacks do give you a window of opportunity to get up close to wail on the Nargacuga's tail - which should be your primary target initially as severing it reduces the range of its tail-based attacks.

Its attacks are largely a mixture of tail swipes, bites, and dashes. While the majority of them can be avoided by simply getting close and dodging when the monster is about to attack, there are a number of them that first require the Nargacuga to back off from you a bit. This gives you the ability to see when certain attacks are coming and to react accordingly. Only try to close the gap after it stops its attack.

Occasionally you may see its tail rise to a vertical position. This means that it'll slam its tail down, which is by far its most dangerous attack. If you are able to dodge it though, the tail get it stuck. This is when you should try to use the Clutch Claw to get some hits in on the tail while also picking up some much-needed ammunition for your slinger.

We'll get to why you need that in a bit, but if you already have enough ammo, you can also go ahead and hit it as normal with hard-hitting attacks. For example, if you have the Dual Blades, go into Demon mode and wail on it with the Blade Dance.

What happens when Nargacuga becomes enraged?

When Nargacuga's eye shadow lights up and becomes red, it is in its enraged state. Nargacuga becomes a ton more dangerous as it will not only move a little faster but its movements become more erratic, making it a lot harder to predict when it'll strike. It also has a habit of attacking twice with the same move, which for attacks such as the tail slam, can be fatal. This is why we latched with the Clutch Claw onto the monster's tail to get Piercing Pods. It can stop the Nargacuga in its tracks and perhaps calm it down a little bit. 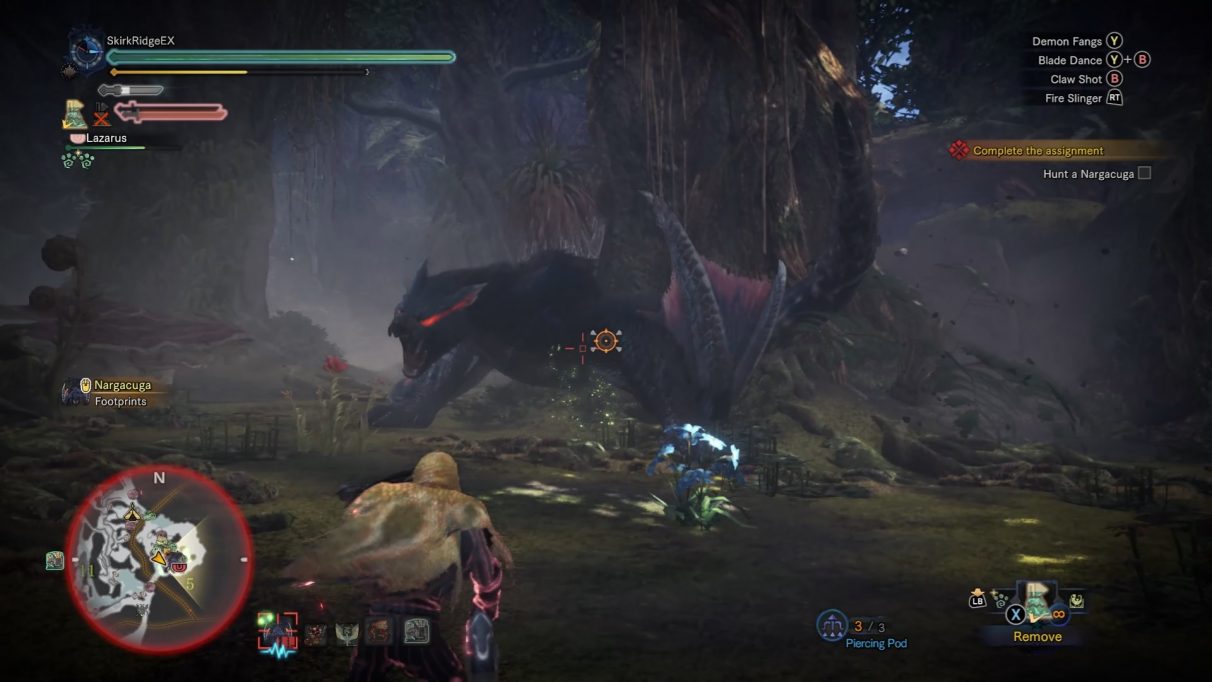 When you've beaten the Nargacuga, you'll be able to get a ton of different Nargacuga materials. These are all the brand new Master Rank items which are used to make tons of Master Rank gear. Below are all the items that you can get for breaking certain parts/defeating the Nargacuga:

We have a whole host of other useful Monster Hunter World Iceborne guide pages for your convenience. Why not take a gander? If you want to check out the previous boss guide, head to the Barioth guide. The game had split once more at this point with the Glavenus being the second monster that needs defeating. When you're done with that though, it's time to take on the next mandatory monsters: Brachydios and Tigrex.