I had some regrets. I’d sabotaged my friend’s chances of dating a stoner ghost, relentlessly mocked another friend until they gave up on love entirely, and trashed the school. As Monster Prom built up to its titular, hormone-soaked event, I turned into a high school asshole. With a gentle touch, the not-really-a-dating-sim nudges you into these familiar roles, and by framing it as a multiplayer competition, it conjures up all sorts of teen drama. But with gorgons and vampires.

“I normally describe it myself as a multiplayer narrative adventure,” explains Monster Prom creative director Julián Quijano. Notably he doesn’t say dating sim. “Some of our biggest detractors are actually hardcore dating sim players. They were looking for a real dating sim and got really pissed off because this is not your regular dating sim.” 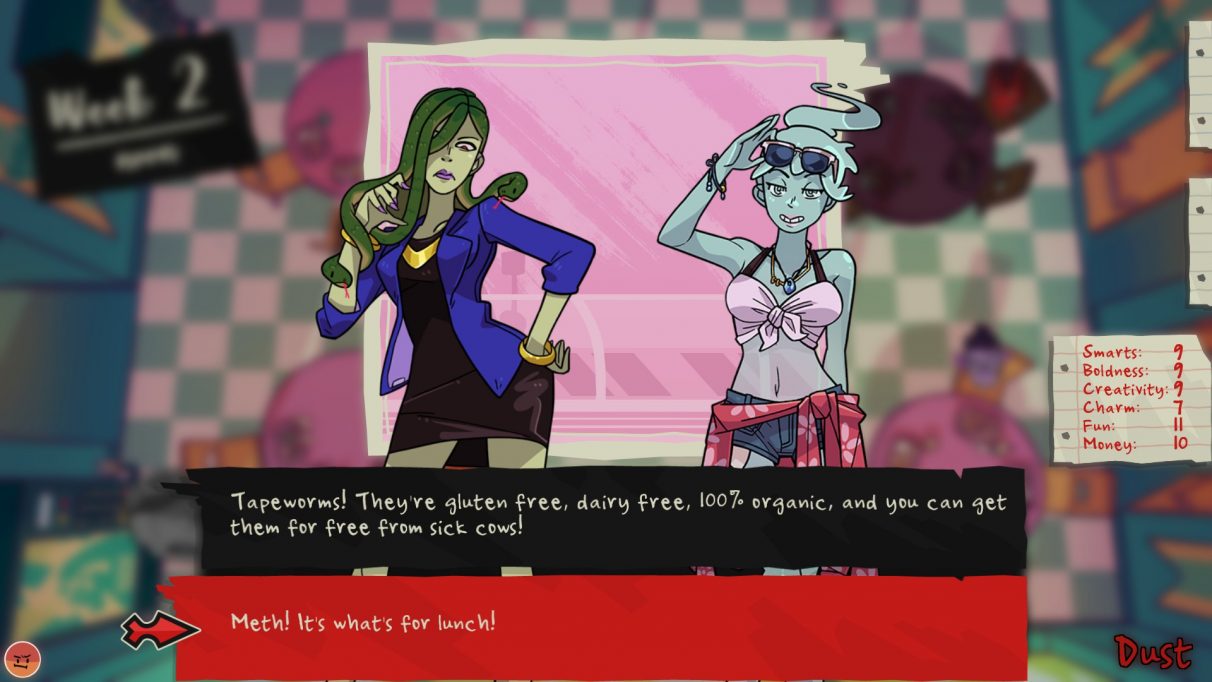 It’s a tricky game to pin down because the mechanics all exist to serve the player-driven story, not check a list of genre must-haves. That might be where the whiff of tabletop RPG comes from. Whether it’s D&D or some custom campaign, the rules are just guidelines, with players and game masters determining how seriously to take things. All the maths and dice and character sheets are just storytelling devices. I’m lucky in that I’ve never played with tyrants, and the story has always taken priority over dice rolls. Quijano’s experience is similar.

“I have actually never played an official tabletop RPG,” he says. “When I was 10 years old, I became obsessed with them, but I never got to play. What we used to do, my friends and I, we created our own RPG. That wasn’t a direct inspiration [for Monster Prom] but it was an important part for me.”

He remembers moving from Argentina to Spain and making friends with what would become his childhood roleplaying group. He and another friend would alternate between player and GM, hosting games for their friends. Quijano created a few different settings, and the focus was always on spinning a good yarn.

“It was a tabletop RPG, but without all the technical stuff. Obviously it was from the mind of an 11-year-old, so it was more about the narrative. I set up these worlds - I did two or three different settings with detailed societies and creatures - and it was a great exercise for the imagination.” 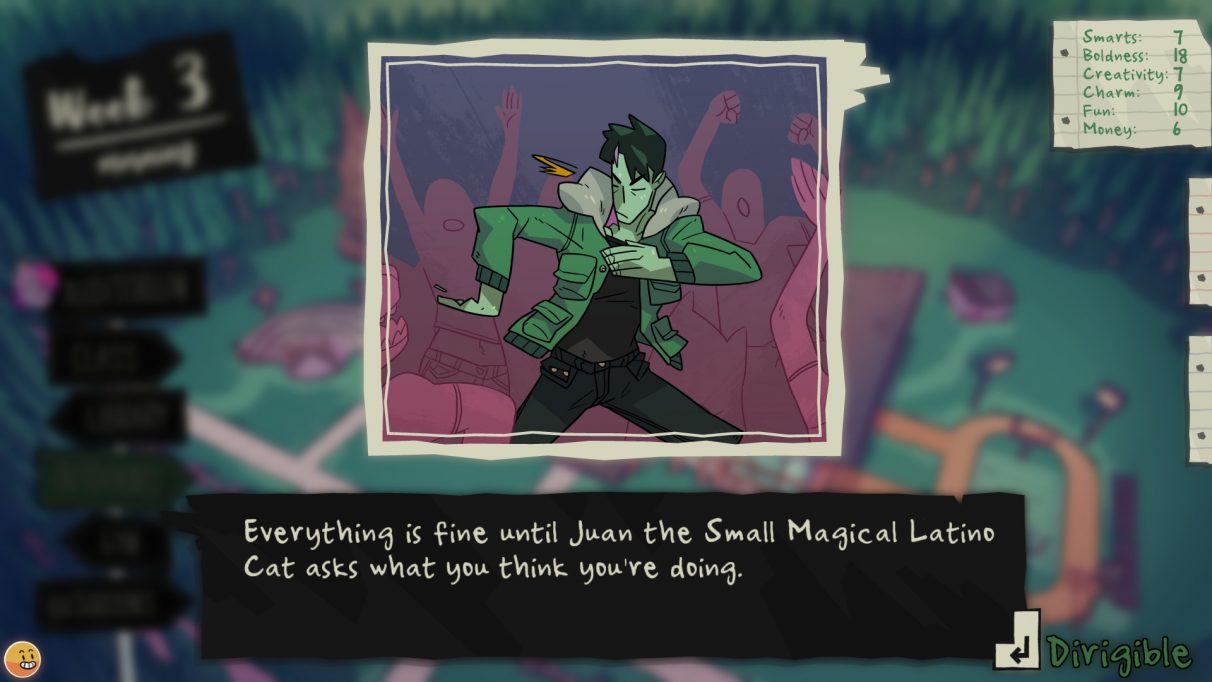 You can see some of 11-year-old Quijano’s approach in Monster Prom now. There are only six stats to keep track of, for example, and they’re a reflection of your personality developing across narrative events and dialogue. Hanging out in the loo all day (it’s better not to ask) made me bolder, while visiting the gym made me charming, but ultimately I was hitting these places up for the story, not to watch some numbers get bigger.

The main objective might be getting a date for prom, but failing to do that is not the same as losing. And who’s to say that a sociopath who gets into a fight with a demonic bad boy (which then turns into a steamy sex scene in the middle of prom) is more of a winner than the loner who goes stag? OK, I’m implying it, but that juxtaposition also elevates both of them, leading to a prom with plenty of ups and downs.

“The game is hard, but it’s more about the story,” says Quijano. “I remember reading, once or twice, people giving us a bad review because it was hard, and I was like what the fuck? Who cares? If you play this game, you should easily understand that it’s not about winning or losing, it’s about laughing and having a good time because of the stories. If you don't like the humour, then it’s not the game for you. I respect that. But if you like the humour, who fucking cares if you get a date to the prom or not?”

In Monster Prom, the competitive streak is there to inspire players to get involved in each other’s storylines. Quijano didn’t want players to go off on their own adventures and just watch what their friends were doing. That’s why, during a weekend excursion, I was able to sneak in a quick chat with my chum’s prospective paramour, laying down some sick burns and ultimately ruining their relationship. But just as important are the interactions that take place outside of the game. 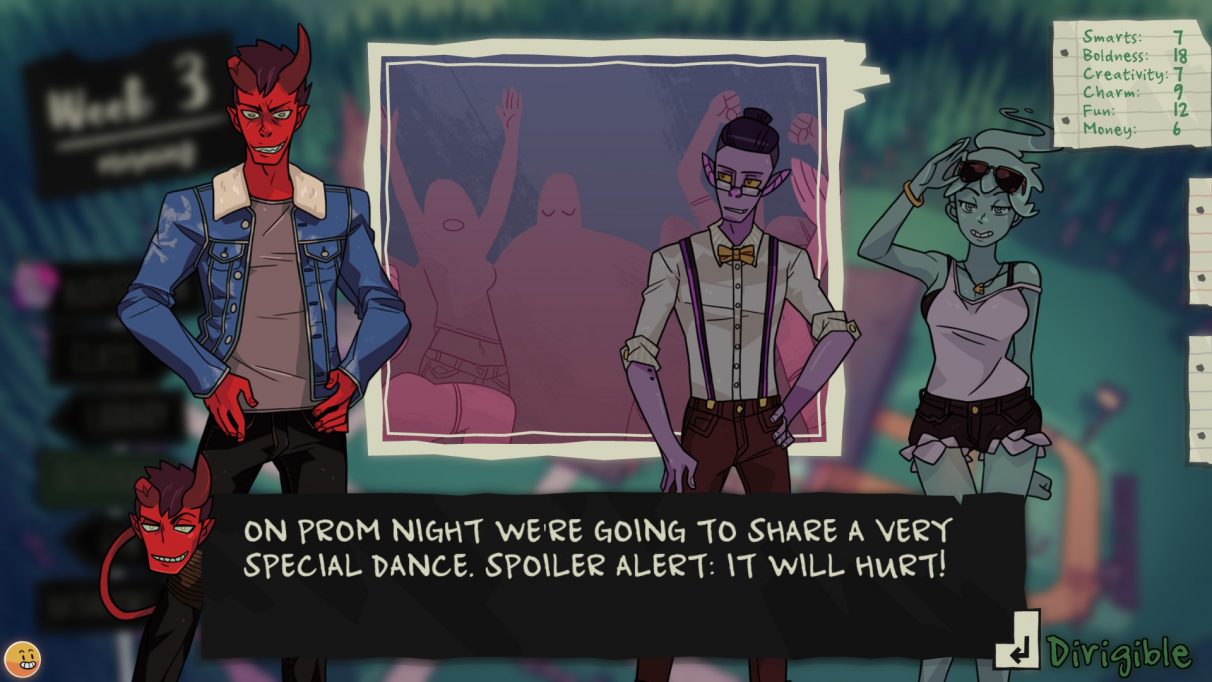 “We wanted to design an experience that really made you interact with your friends in real life, or on Discord or Skype,” Quijano says. “We wanted to create mechanics that ignited dynamics within people. We imagined four friends having drinks and laughing and talking - that was the main goal, and it’s really close to tabletop games.”

The optional challenges that let players assign their turn order prove to be an unexpectedly great way to get the ball rolling in that regard. These challenges are evocative of Cards Against Humanity, but they benefit from being good-natured and brief. You get asked to think of something vague, like the weirdest thing you could order in a restaurant, and once everyone has shared their weird thing, they have to judge it based on an equally random criteria, like how helpful would this be on Mars? It’s then up to the group to decide the turn order based on the answers. The results are almost always ridiculous - I can’t for the life of me remember how I won with “Lucy Liu’s many interesting tie choices in Elementary” - and the whole thing serves as an excellent ice breaker.

I wish actual tabletop games had something like this. I’m comfortable roleplaying because I crave the attention, but if the idea of having to talk to other people makes you break out in a rash, roleplaying can be daunting. And I’m just talking about playing the game, not even going whole hog and putting on a silly voice. Yes, I’m partial to a silly voice. If you’re not already playing with a group of close friends, the challenges ease you in with some very bizarre small talk. If that sounds like even more of a nightmare, then you can skip the challenges and leave the turn order up to fate. 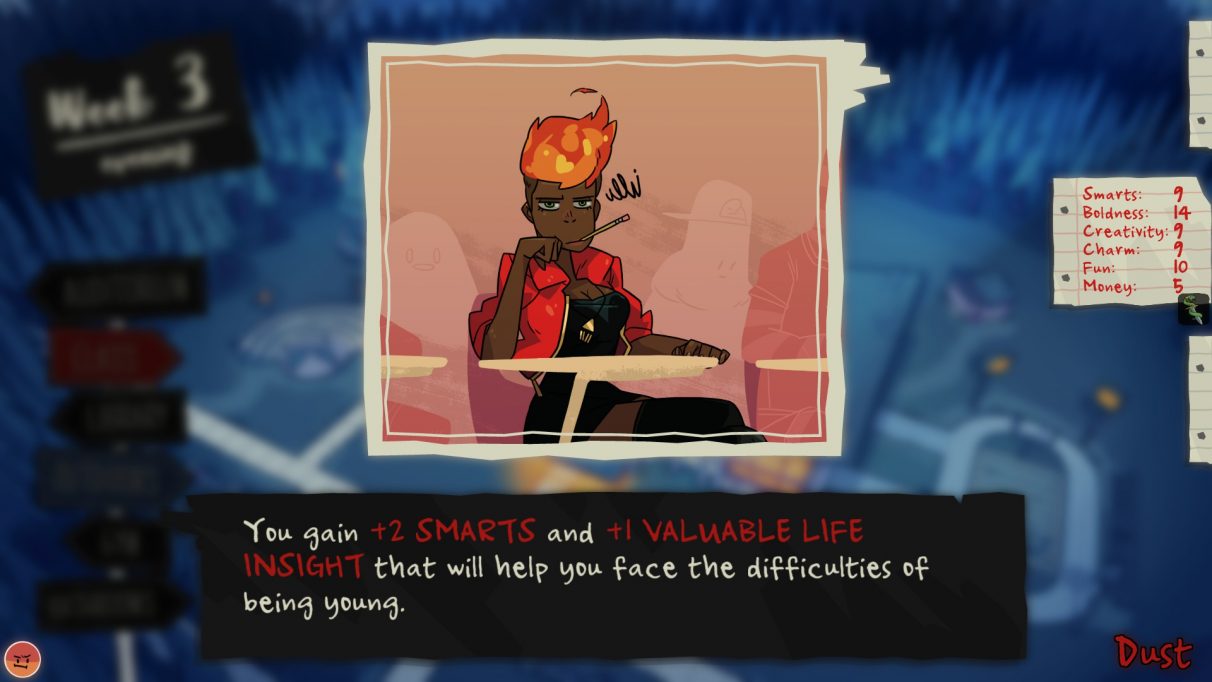 Although Monster Prom weaves between RPG, visual novel and party game, Beautiful Glitch mostly looked to TV shows for inspiration. It’s not episodic, but the short matches, random events, multiple love interests and secret endings inspire repeat playthroughs. Quijano is drawn to the way shows slowly manufacture their universes, and how their characters have lives outside of whatever adventure they’re on in that episode.

“You can see the consequences of this in the huge, beautiful fandoms for shows like Buffy the Vampire Slayer or Steven Universe,” says Quijano. “You see how people get slowly trapped inside the narrative web of the TV show.”

Every love interest, then, fits into parodies of one or two familiar tropes that years of TV have embedded into countless brains. Each of them has traits they prefer in a partner, and while constructing your personality to match someone you fancy is probably really, really unhealthy, it’s a handy roleplaying shortcut. Doing lots of bold things made me a good match for bad boy Damien, which in turn made me get even bolder, and that started to seep into challenges and the real conversations with my group of lotharios.

I’m reminded a bit of Persona in the way that Monster Prom handles relationships. Romance is a big part of it, certainly, but there’s more to it than single-mindedly pursuing someone to take them to prom. “We focus less on the romance, romance, romance all the time and more on the slice of life,” says Quijano. “We think love works that way, especially when you are interacting with someone in a continuous way, like someone you work with or someone you study with.” 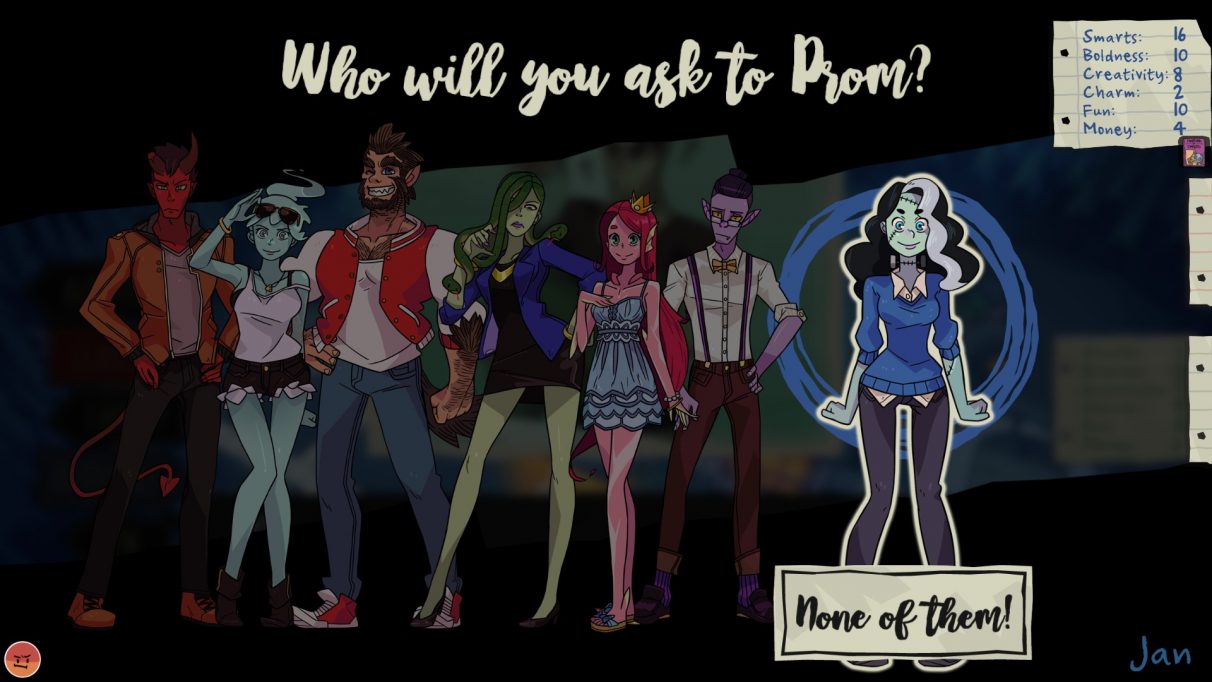 You can be an athlete, a party nut, an academic, each potentially opening up new paths, not all of them necessarily romantic. And you don’t have to decide who you want to take to prom until just before, so you can wind your way through multiple characters instead of only focusing on one person.

“Dating sims tend to use a branching narrative where, at an early point in the game, you have to choose the branch you prefer. Normally the branch is tied to a character, so if there are four love interests, when you choose one all the events have only this character. We wanted to do things differently. So most of the events, I’d say 60% of the events, involve another character.”

It takes the game a few turns to figure out who you might be into, as well. “When you play the normal version with nine turns, during the first three turns the game is still trying to analyse which character you like the most. There’s between two and four ways the game understands who you want to flirt with, and obviously it can be wrong, but we tried to come up with ways that made most sense. So after the third turn you will always encounter the character you want to take to prom, or at least the character the game understands you want to take to prom.” 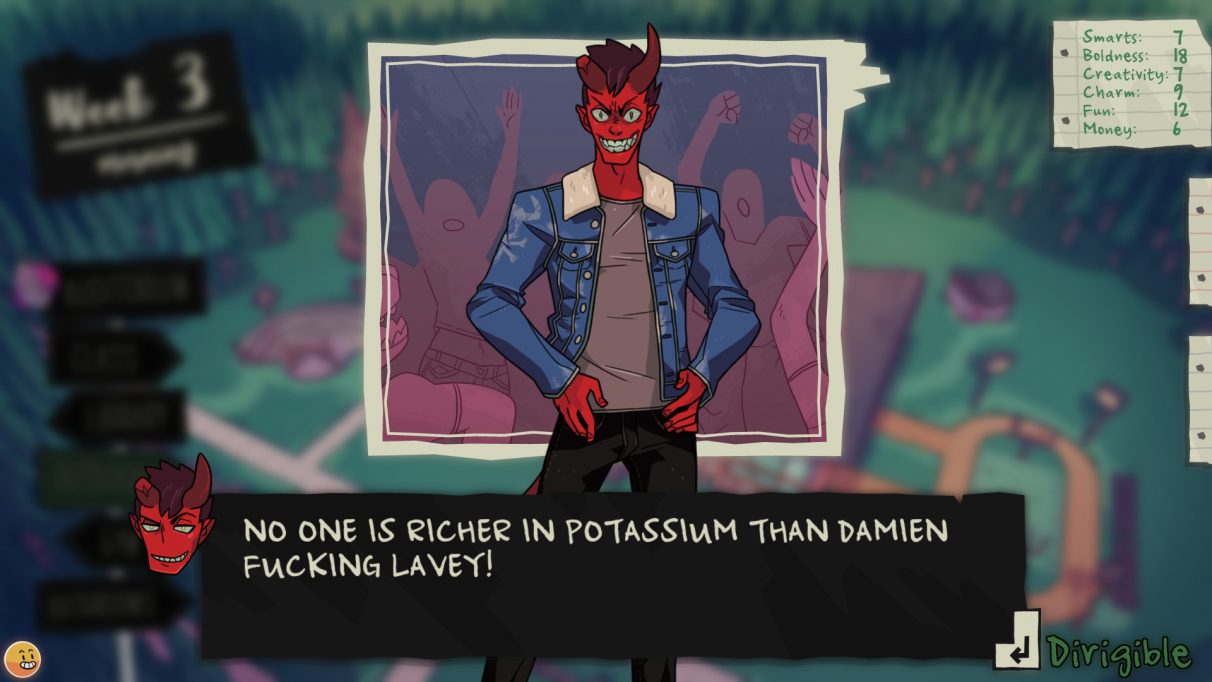 Your stats, who you chat to, what dialogue options you pick - they all hint at who you might have your eye on, but that just means you’re going to get more chances to speak to that character. You can change your mind whenever you want - like if, to choose a random example, a “friend” purposefully sabotages your relationship because the game seemed to be “egging him on”. Look, I said I was sorry.

I sensed some bitterness when the results of my group’s romantic (some less than others) adventures were displayed. In my journey to prom, I’d left devastation in my wake, and two broken hearts. Our three stories had coalesced into one where I was undoubtedly the villain, but so much of that came from us, rather than game mechanics or writing. Unfortunately, that also means that I can’t blame Monster Prom for turning me into an asshole.

So it’s a multiplayer narrative adventure, but I hope Julián doesn’t mind if I keep calling it a tabletop RPG in disguise. Almost accidentally, it captures so much of what makes the best tabletop romps compelling, and as a bonus it’s a million miles away from the staid videogame RPG settings we mostly get to muck around in. Even the very good ones play it a little bit safe, and there are only so many bucolic fantasy lands and hero's journeys that I can fit into my life.