It seems like more of the same. To say this of Tom Clancy’s The Division 2 might make you fire your rifle into the air and shout “yeehaw” but it’s more likely to make you shrug. ‘Ubisoft sequel marginally different from previous game’ is not exactly a surprising headline, I’ll admit, but it’s all I’ve got based on the 15 minutes of footwork and firefights I played through as a demo. The wintry warfare of The Division’s New York kept me idly satisfied even with its plateaus of grind and spongey enemies. We’re now sojourning though a summery Washington DC, a new city that promises to depart from endless apartment blocks. But in reality, I can barely notice the difference.

That’s not totally fair. Atmospherically, at least, I can notice a difference. I’m playing with three others, tramping through (more or less) the same area shown in the E3 trailer. Six months have passed since the virus outbreak of the first game, it's sunny and warm, and the Hayden Mills building is decrepit and full of bad dudes. Air Force One is lying in a shattered heap within sight of the Capitol building, controlled by an armed group called the True Sons. There are effigies hanging from street signs. Cautionary graffiti reads: “We have more guns than you.”

I’m not sure they do. I have plenty of guns, including a crossbow with explosive bolts. That’s because I’m the Survivalist - one of three classes kept in reserve for players who reach the endgame. One of my squadmates is a Sniper toting a scoped rifle, and another is a Demolitionist with a grenade launcher. The fourth is an Ubisoft employee. Her weapon is knowing where we’re supposed to go. 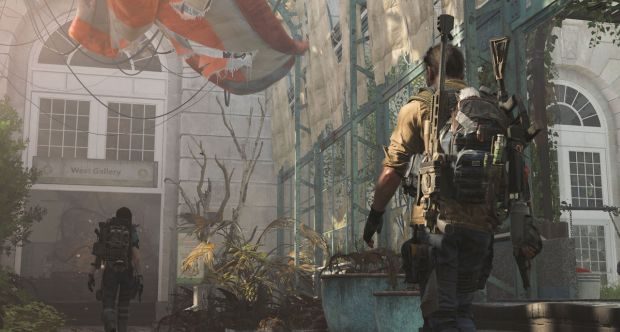 It isn’t long before we get into a scrap. My seeker mines rattle out in search of baddies, before exploding. My squadmate’s fuel gun launches a flammable pocket of gas, which becomes ignited when you shoot into it. The sentry gun of another ally tak-tak-taks away at some enemies, and a nasty flying drone comes out to play as well. Not all of these abilities are new, but there’s enough to suggest that the revision of the skill tree has been given a fair amount of thought.

The moment-to-moment combat is not so reformed. But maybe that’s because so little about it needed to be altered. Gunfights remain a matter of dashing from cover to cover, of flanking and being flanked, and firing big holographic hoops around as many foes as possible. It still feels smooth and slick, lacking the frustrating stickiness of some cover shooters. It’s maybe even a little cleaner than before, interface-wise. I don’t see the thin orange line of the first game, the one that would guide you to the next piece of cover. Now there’s only the prompt itself, the little “A” that appears on whatever car bonnet you want to shoulder barge next.

And shoulder barge we do, right into the crash site of Air Force One, where some bad dudes have set up. There’s a wide red zone here, painted on the ground in recognisable digi-vision, denoting the end of neutral territory and the beginning of True Sons dominion. We want to unpaint that, says our demo guide, and she fires a flare to call for reinforcements. Civilians from nearby encampments arrive, green tickers over their heads, wanting in on the action. But in the ensuing firefight (which felt basically identical to the scrap in the trailer) I barely see our helpers. They've either quickly died, or simply stayed out of sight. Up to us to shoot the bad men, then. I didn't get to see any of the glue gun enemies from the scripted video, who fix your character to the ground with sticky foam. But the other enemies (tanky machine gunners, nasty snipers, flanky shotgunners) did feel slightly less spongey than the previous game, though this might be because we were playing as max-level monsters with all the best kit. 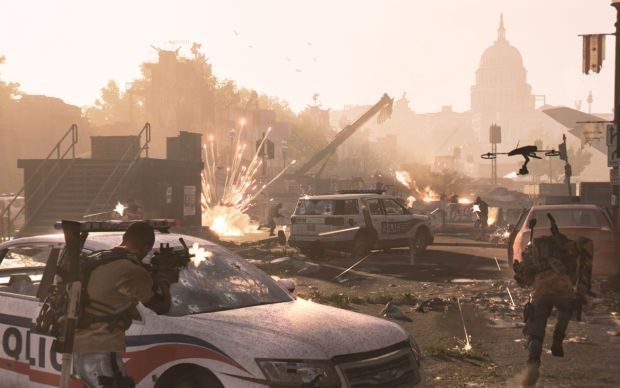 It’s not clear, however, if scrubbing out these bad guys and setting up our own outpost was a one-time goal of a single mission, or if there are multiple similar missions, or if the map of Washington will be something you can “clean up” like in the Far Cry games. The first Division didn’t partake in out-and-out map-colouring, since it was an online world of rinsing and repeating. But it’s possible Ubisoft have arrived at some compromise.

Regardless, we soon killed all the men, leaving the battlefield scattered with coloured pillars of light, those shiny loot beacons boasting gloves and guns for us to pick up, just in time for the demo to end.

At this point I thought: “yup”. There were no surprises to this mini Clancyromp, but I had minimal expectation of surprise. There is more to be shown, of course (it’s not due out until March 2019). But the fact that I feel mostly empty of observational verve is as much due to being only allowed 15 minutes in this broken world, as it is the onset of what is either ennui or contentment with what I'm faced with - The Division 2: More Of The Division. I’m not overly excited by that promise. But that doesn’t mean I won’t waste a week of my life to lazy city shootwalks and whatever hellish pit replaces the Dark Zone of NYC. Is this what it feels like to be a Destiny player?

So yes, at this early stage I can barely notice the difference between Divisions, but I also find it hard to care. The appeal is of a bright, brash game requiring minimal effort and thought. I have so few demands to make of a sequel (less spongey enemies, a more interesting Dark Zone, less grind) that it’s hard to have concrete hopes and fears. Others might have hoped for a more radical setting than another US city in collapse. And yes, Istanbul or Hong Kong or Tallinn or Edinburgh might have been more interesting places. But again, it’s hard to expect this of a series that started by depicting a US city full of gung-ho patriots who may as well all be wearing t-shirts that read: “I <3 New York And Also Guns”. 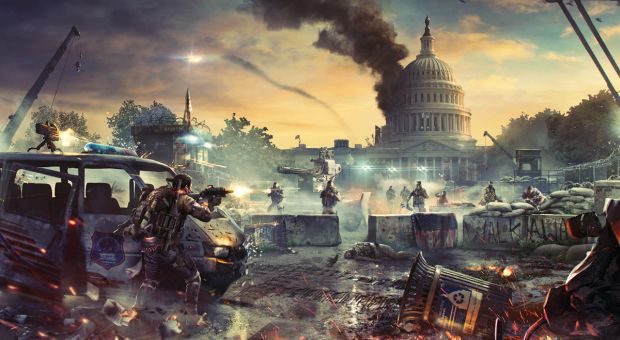 Others might wish for the Clancyist story to address its political undertones with more intelligence. Indeed, The Division 2 already appears political insofar as it is about US domestic warfare and the collapse of the government elite. That’s true whether Ubisoft want it to be or not. But that doesn’t mean it'll be intelligently political. We'll have to wait and see, although I don't generally trust AAA gunfests to say anything cogent on any political matter. Because to seek a coherent interpretation of civil unrest or nuanced political commentary from a videogame about shooting Polyfilla off your mate's feet with a shotgun is probably unwise. I’ll be satisfied if they can just avoid another confused mish-mash the likes of Ghost Recon Wildlands.

Anyway, that’s a thought which probably needs to be expanded elsewhere. As far as this demo goes, it was another waist-high wade through bullets and bombs. More of the same, more of the same. You might be content with that, or you might feel exhausted. Or, like me, you might not even know how you feel until you see the rest of Washington.

You can read everything we know about The Division 2 here. It's due out March 15, 2019. Check out our E3 2018 tag for more announcements, trailers, news, and goodness knows what else.