Wolcen's final boss was for the longest time more than a bit broken. It was impossible to beat him if  damaged him while he was transforming in the second or third phase. Now the game has been patched, he is able to be killed with ease, well, if you have the right build of course.

Our main Wolcen guide has further tips for the rest of the game, but for now, we'll be explaining in this Wolcen act 3 boss guide what is happening in this fight and how to beat Heimlock. A particularly strong build against this boss is the Plaguelord build as detailed in our Wolcen builds guide, as you don't even need to be near him to damage his health. Poison damage will also go through his base armour, making this boss rather trivial.

If you don't want to just use a build that someone else has made, make your own while using our Wolcen skill tree (classes) guide to assist in learning what passives might help or our Wolcen skills guide for active skills that can deal damage.

First, let's talk about the arena you are fighting in. It's a circular room with three orbs that can be attacked by you or your enemies. When an orb sustains enough damage, it will produce a negative effect that will hinder you in the fight. The top orb sends an aether pulse outwards in a circle, the bottom right orb pumps out a lot of regular enemies, and the bottom left orb emits a freezing wave that will make you stick to the spot for a short time.

On top of this, the arena is being bombarded with meteors and there's a small electric ball circling the arena. The meteors will do a fair bit of damage, but it's the electric ball that can do a lot of damage if you're not careful. Thankfully the meteors will have red circles indicating where they will land and the electric ball moves so slowly that it soon becomes an afterthought. Occasionally you'll also see lines appear from the centre of the arena. This is the fiery pit about to send out a wave of flames outwards. While this isn't very damaging, it's very difficult to avoid without dodging.

If all that wasn't bad enough, there's Heimlock. He's a beefy lad with a massive axe that likes to swing it around with his borrowed demonic strength. He has a few attacks that he can do at any time.

A good strategy to defeat him is to time your attacks as his ones end. He spends a surprising amount of time unable to move after every attack finishes. By using hit and run tactics, those builds that don't rely on ailments can get some quick damage in before Heimlock decides he wants to attack once more. 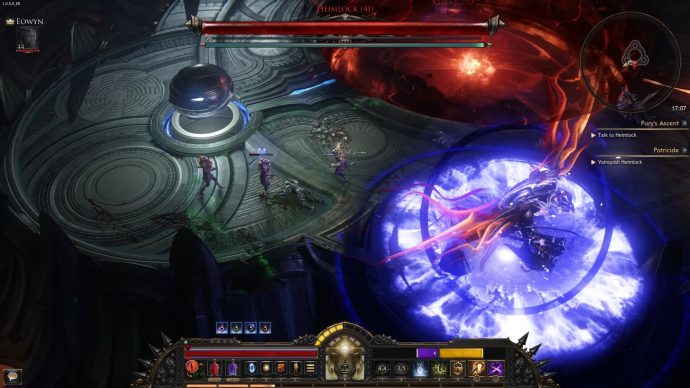 This phase is largely the same as phase one, along with all the hazards that came with it. The only big difference with the hazards is that the lines from the centre of the arena are larger and harder to avoid.

Where things are truly different is that Heimlock can now transform into an "ascended form". You can tell when this happens as he grows fiery wings. This was the transformation that was broken, but with the latest patch, you can now hit him while he transforms. As he's transformed, he'll gain an extra shield bar underneath his health bar that must be depleted before you can damage him. He'll begin this phase already transformed, so you'll need to watch for the following attacks.

Once you've damaged Heimlock's ascended form enough, he'll revert back to his regular form. He has the same attacks as in phase one, so see the previous section for tips to dodge his attacks. He will not transform again until he has his armour broken in his regular form. Take out his health to reach the climax of this battle. 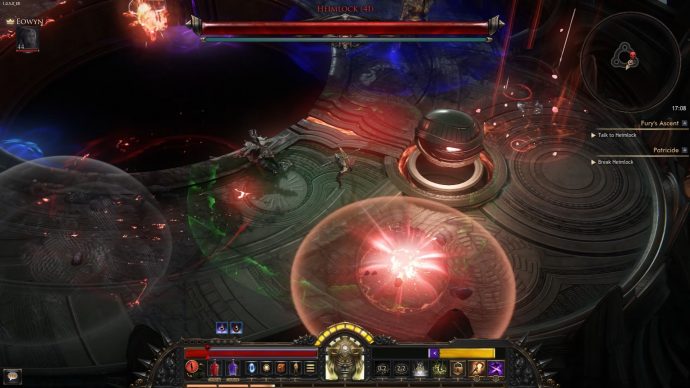 Just as things look bleak, your friend returns to the battle and begins to close the portal. He also puts three domes between the orbs. They supposedly protect you from being damaged, but in my experience they only really protect you from attacks that don't come from Heimlock. Heimlock isn't all that much different from phase two, except his transformations are no longer tied to having his armour being broken.

He also gains one more attack. When standing still, he can swing his axe at the air to send out electrical darts. These move very quickly, so you may wish to dodge roll to avoid them entirely, or just position yourself between them.

Your main concern here is with the amount of spell effects being thrown at you from the portal itself. Meteors, flame waves, and all the other stuff that was a minor nuisance beforehand, now appears with such frequency that they'll keep you on your toes. The three protective shields will prevent damage from these spells, but you'll likely need to move quickly to avoid Heimlock's more brutal attacks.

Defeating Heimlock will give you a bunch of items, gold, and rewards for completing the quest. Chief among these is a Genesis Stone, which is a new type of gem item that can be fitted into a gem slot. Find out more about these gems and how they work in the Wolcen items guide. You'll also get a Greater Entropy Orb, which can only be applied to legendary equipment.

You'll also unlock the "Champion of Stormfall" mode, and we have our Wolcen Champion Of Stormfall guide which will go over everything you need to know about that.