Picking up loot is most of what Wolcen is, but using those items effectively can make all the difference between having a useless character and an unstoppable build. There's a lot to consider, such as what type of armour you should be equipping, which gems you should be putting into gem slots, and whether the hood custom skin you picked up hours ago looks better than the crown helmet you just picked up.

Our Wolcen items guide has all the information you need on how gem slots work, as well as the different item type and rarities. While customising your character doesn't change stats, the feature is surprisingly well hidden, so we'll also be showing you how to give your character a bit more of a personal touch.

For more in-depth and specific builds to use your best items with, there is our guide on Wolcen builds. We also have a general Wolcen guide full of tips and tricks for new players, while the Wolcen skill tree (classes) guide has tips specifically for the rather complicated passive skill tree. 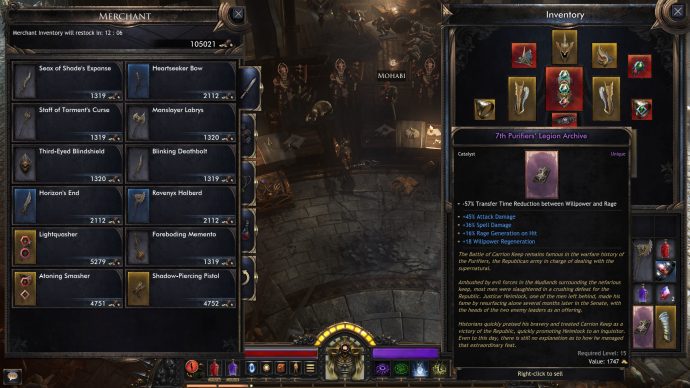 Items in Wolcen are divided into different types and rarities. Weapons that you can equip generally increase your rage to use for their active skills and give you more rage as you hit enemies with their basic attack (left mouse button). Certain active skills can only be used when you use a particular weapon type (more on active skills themselves in our Wolcen skills guide). You can check which skills you can use with your weapon types by looking at their description in the active skills menu (press S on keyboard to access it).

Staves are the only equipable weapon that can cast spells. Their regular attack reduces rage and increases willpower instead. Catalysts are the only other item that can give you willpower to cast spells. You can only equip catalysts if you have a spare hand, so you can't use two-handed weapons with catalysts. This can enable those with rage active skills to use a couple of willpower active skills, swapping between the two in combat.

The one constant is that the four different types all give the following buffs for that type of armour equipped.

They also give a set buff depending on the armour piece you have equipped. A Sorcerer's boots for example gives a set amount of wisdom, but a Rogue's boots will give agility. These buffs are always present, no matter what the rarity of the item is. How much they increase that stat by is dependent on the level requirement to equip the armour.

Rarity of items also affects how good items are. Traditionally in RPGs like Diablo, the rarer the item, the better it is. The same is true here and each rarity has a set amount of additional randomised perks.

These can be any type of perk, no matter if it's relevant to your build that you're going for, or even the item itself. If you want to change the perks on your items, you'll need to use Entropy Orbs or Ohm's Echoes. These are single use items that change either one or all of the perks that item has. The only limitation here is that you can't change the perk slots of legendary or unique items.

They also have the side effect of removing any gems that have been inserted into the sockets. This is to guarantee that the item will gain a magic effect based on the gem's item or type. 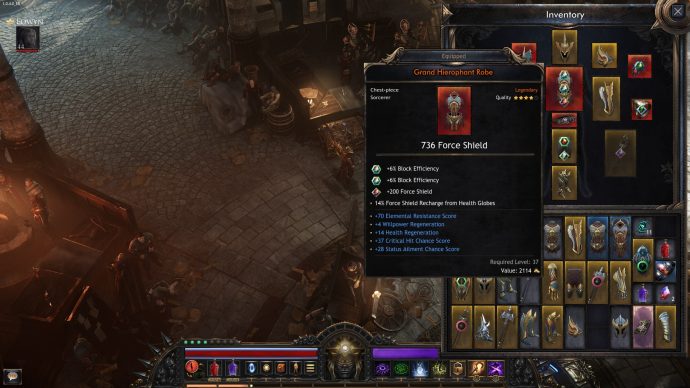 How to use gems

Items of a rarity value of rare (yellow) or above have a chance of including gem slots. These are where you can apply gems to give your items additional perks to augment your character's passive stats. Unlike similar games like Diablo, the type of gem slot in Wolcen doesn't get better, just different. What passive perk you get depends on the gem that's equipped to the gem slot.

Gems are items that come in varying levels of quality, with better quality gems giving items better passive stats. To show you just how different the gem slots are, we're going to take a look at one of the early gems you may pick up along the way. Let's say you pick up a chipped ruby. It has the potential to give one of nine different effects and it all depends on which gem slot you put it in.

Of course, different gem types and better quality gems change the effects. Highlight a gem with your mouse to see all of the effects that the gem gives that item while you have it equipped. Once a gem is inserted into a slot, you can't remove it by yourself.

There is a merchant in Stormfall that you should take full advantage of when you begin getting gems. Her name is Zanafer Stark and she's located to the west of the portal in the middle of the town hub. Her shop can be used to remove gems from items, reroll the type of gem slots on an item, and sell you new gems. It'll cost gold to use Zanafer's services, but it can be handy for getting the best possible build. 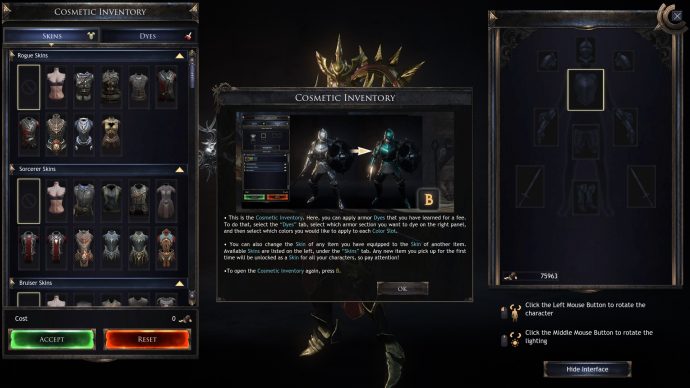 How to apply dyes to items

You'll occasionally pick up dyes along the way on your journey. To use dyes, right click on them to unlock that colour in the cosmetic inventory. You'll then permanently unlock that colour to use for your items. Duplicate dyes will not be able to be used, so you can freely sell or trade them.

To access the Cosmetic Inventory, press B on your keyboard. Here you'll be able to apply colours with the dyes you have unlocked, as well as give your character skins based on the items you have looted in the game. You do not need to own the item to use the skin. There is a cost to gold to apply the changes, so make sure you have the gold to apply them.

You should now know everything you need to know to get you thinking about what types of weapons and armour you should be equipping to your character for your chosen build, as well as which gems would augment your abilities the most. I should warn you now that having the right build will help drastically with the game's main bosses. We've got a small list of boss guides below: