Throughout Wolcen's second act, you are tormented by a rather odd presence. It seems that this entity is converting everything and subjecting them to its hive mind. With the right gear setup, the second act boss is nowhere near as hard as the previous act's final duel, but knowing where to stand seems to be the biggest hurdle.

While you fight Lambach drones constantly, the boss fight is fought over two phases. One is against the figure that has been stalking you, while the other is against its true form. This Lambach boss guide will go over all the phases and show you how to beat it. Our Wolcen guide has some tips and tricks for beginners that are also very useful to use against every enemy in the game. If you found yourself here before beating act one's boss, head on over to our Wolcen Act 1 boss guide for tips on how to beat them.

Before you even go into this boss fight, I highly recommend that you equip the best healing potion and either a willpower or rage potion. This will reduce the time needed to stand around waiting for your ability resource of choice to recharge, meaning you can hammer it with damage inducing skills. Having status ailment gems can also help push you over the edge, so have a look at our Wolcen items guide for more on those.

If you want a really good build for this fight, the Plaguelord build in our Wolcen builds guide is probably the best one as its spells deal tons of damage onto it really quickly. I've also recorded my successful fight against Lambach using this build and as you can see, it's disgustingly good. You will still need to dodge its attacks, as they still hit hard, so look below for the tips.

In this first phase, Lambach will be stuck in the middle, as more and more creeps are flushed out of the pods that decorate this grim arena. Lambach does not move from the centre, so you're free to cast as many spells and abilities that place a damaging effect in one spot. You can then focus a little more on attacking the monsters that appear and avoiding the attacks.

This form is easily weakened while its armour is broken, but it does have some very damaging attacks:

As for the enemies that swarm the battlefield in this phase, they include all the regular kinds of enemies that you've faced while exploring the Lambach's lair. The main ones to watch out for are those that pounce, the large harvesters, and the humanoids with railguns. Damage can easily stack up if you aren't careful, though you should mainly be avoiding Lambach's attacks over theirs as the Lambach's attacks hurt a lot more.

Upon defeating Lambach, it will retreat momentarily, before something much bigger appears. 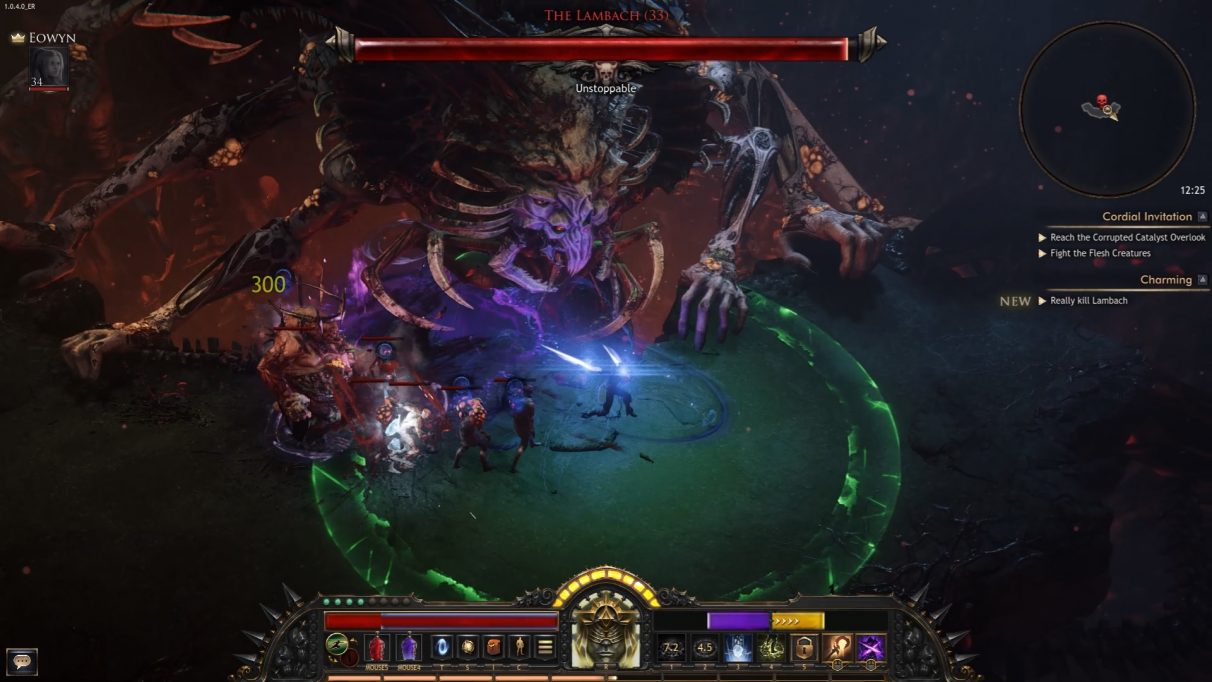 Well this one's a lot bigger. Lambach's true form is a huge multi-eyed demon with lots of arms and lots of tentacles. Like before, Lambach stays in one place, dominating the centre of the platform. However, you have a lot less room to move around in. It does have the word "Unstoppable" underneath its health bar, but this just means it can't be stunned. Much of the same strategies apply for defeating this phase, including the vulnerability of spells that linger on a designated spot, but the attacks are very different.

With Lambach finally slain, you'll get plenty of rare gear and items for defeating it, completing the chapter. With clever use of skills and passive perks, you should be able to overcome this boss with minimal issues, so have a look at our Wolcen skill tree (classes) guide for tips on the Gate of Fates progression tree or the Wolcen skills for stuff on active skills. The next boss is a bit broken however. Find out how what the glitch and the workaround is in our Wolcen Act 3 boss guide.