The world is crying out for Diablikes, or at least it seems that way from the rampant success of Wolcen: Lords Of Mayhem, a hacking, slashing, dungeon crawling action RPG that went into the top ten on Steam as soon as it released. It's only climbed higher since, despite the fact that it's only just left early access and is not issue-free. Also despite the fact that I have played it for several hours and have yet to identify who or what is Wolcen.

Wolcen: Lords Of Mayhem (which is, impressively, the game's second crack at a title) is very derivative. If I didn't know any better I'd say even the dialogue was procedurally generated by digitally pulping together Tolkien's collected works with all three previous Diablo games, a recent D&D rulebook and the entire contents of one (1) Games Workshop store. But that's okay. Nothing exists that is original, as they say. And, even as I write this, I want to play it again, because it is amazing.

Saying it is amazing is going to be hard to justify because I anticipate that almost the entirety of the rest of this article will be describing ways that Wolcen is not that. Wolcen is ridiculous. But the thing is that while everything in Wolcen is ridiculous, a lot of them are equal parts amazing. For example, the character creation. On the one hand you can choose the colour of each eye individually, allowing everyone to look a bit more like David Bowie. Amazing.

On the other hand, the femme player character model comes with inbuilt five inch heels, no matter what boots you equip or skill route you take - although they're at least chunky and not a stiletto so, y'know, practical...? Please also pay attention to the the standard issue pair of juggernorks and ha-hi-larious power stance. Your character reverts to their idle stance whenever you're not clicking to make them do anything, so about half of my screenshots show Horace the rogue/archer straddling the landscape like this, daring anyone or thing to even glance at her boobzookas even as she presses them forward. Amazing. Ridiculous.

There is a story. It is very dramatic and epic and overwrought. The opening of the very first cinematic made me laugh out loud: 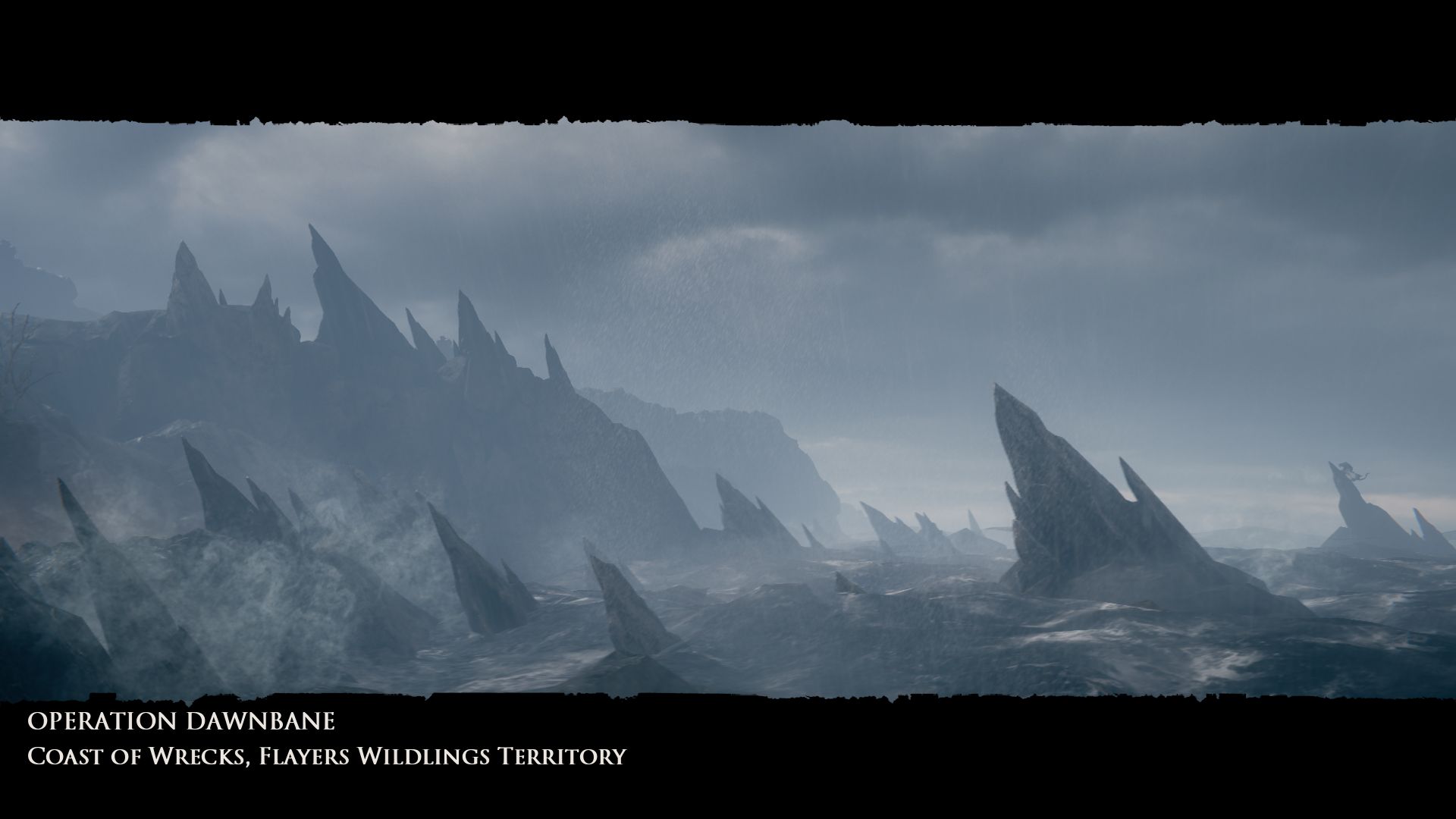 "OPERATION DAWNBANE, COAST OF WRECKS, FLAYERS WILDLINGS TERRITORY" is an impossibly generic heading for this type of game. Replace every number on a roulette wheel with words like SEEKERS, RAVAGER and SHATTERING, spin that bad boy half a dozen times, and write your own fantasy dungeon crawler. Later on, I met a soldier from the merchant city Stormfall, and as he and his men were attacked by some angry frogs he shouted "Show those greens the colour of the storm!". Any colour but green, presumably.

You start off as one of four adoptive children of Heimlock, a grim armourboi who leads an army of indeterminate religious zeal (I think they're called Purifiers?). Heimlock has the impressive shoulder pads and general demeanour of a space marine rip off. At the start of the game you are attacked by a demon and turn into some kind of archangel, thus making your war family suspicious. I'm like 100% sure you will end up fighting your adoptive siblings and eventually Heimlock himself as bosses. 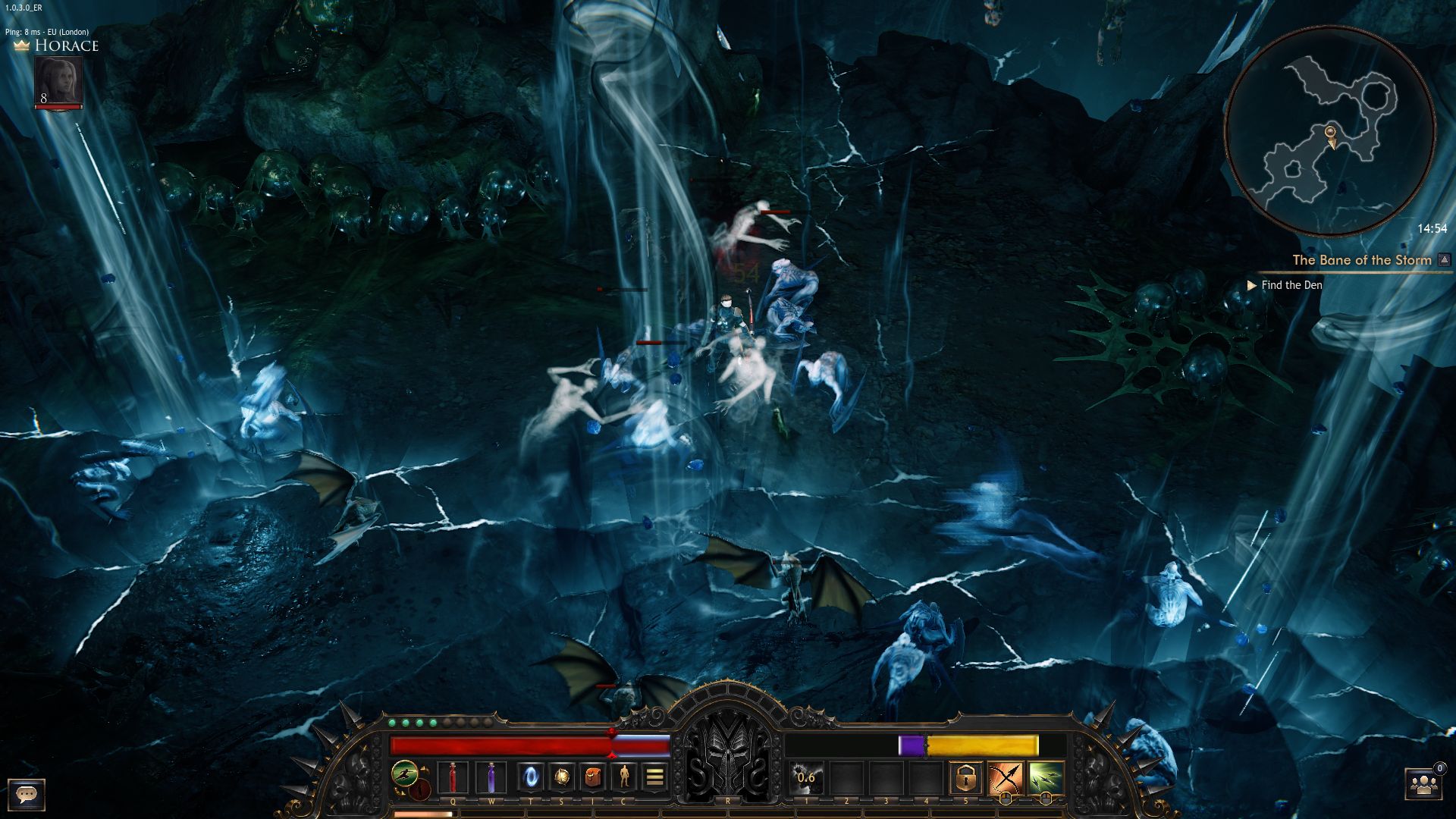 In practise the story really doesn't matter, though, not only because you already know it if you have every experienced any fantasy property ever, but also because Wolcen is a game about clicking on things and making them disappear in a cloud of blood. I don't need to understand why I'm doing it. You run around a slightly grim map. Great swarms of trash mobs close in around you and you decimate them. My character can fire off arrows about six times faster and with more accuracy than Legolas when he did those lads on a Timothy (Oliphaunt) in Return Of The King. The murder Horace can mete out is limited only by how quickly I can slam the right mouse button.

Wolcen is sort of classless, in that skills are tied to the weapon you're using, but the leeway isn't all that wide and Horace has ended up as a fairly standard rogue-type with a bow (although our guides lads have put together some build tips, and I have grand plans to introduce magic if possible). Because I went with ranged weapons early on my skills include dropping a bomb and leaping ten metres away from combat, and summoning two massive blades from nowhere for a melee attack. I can barely tell what's happening on the battlefield, except that usually there are swarms of ghosts and sometimes some rats.

In classic dungeon crawling and looting style, your gear becomes pretty key, and a genuinely cool thing about Wolcen is that you can equip each arm and shoulder separately, so you can mix and match gauntlets and spaulders and end up with a pretty cool warrior outfit of your choosing. 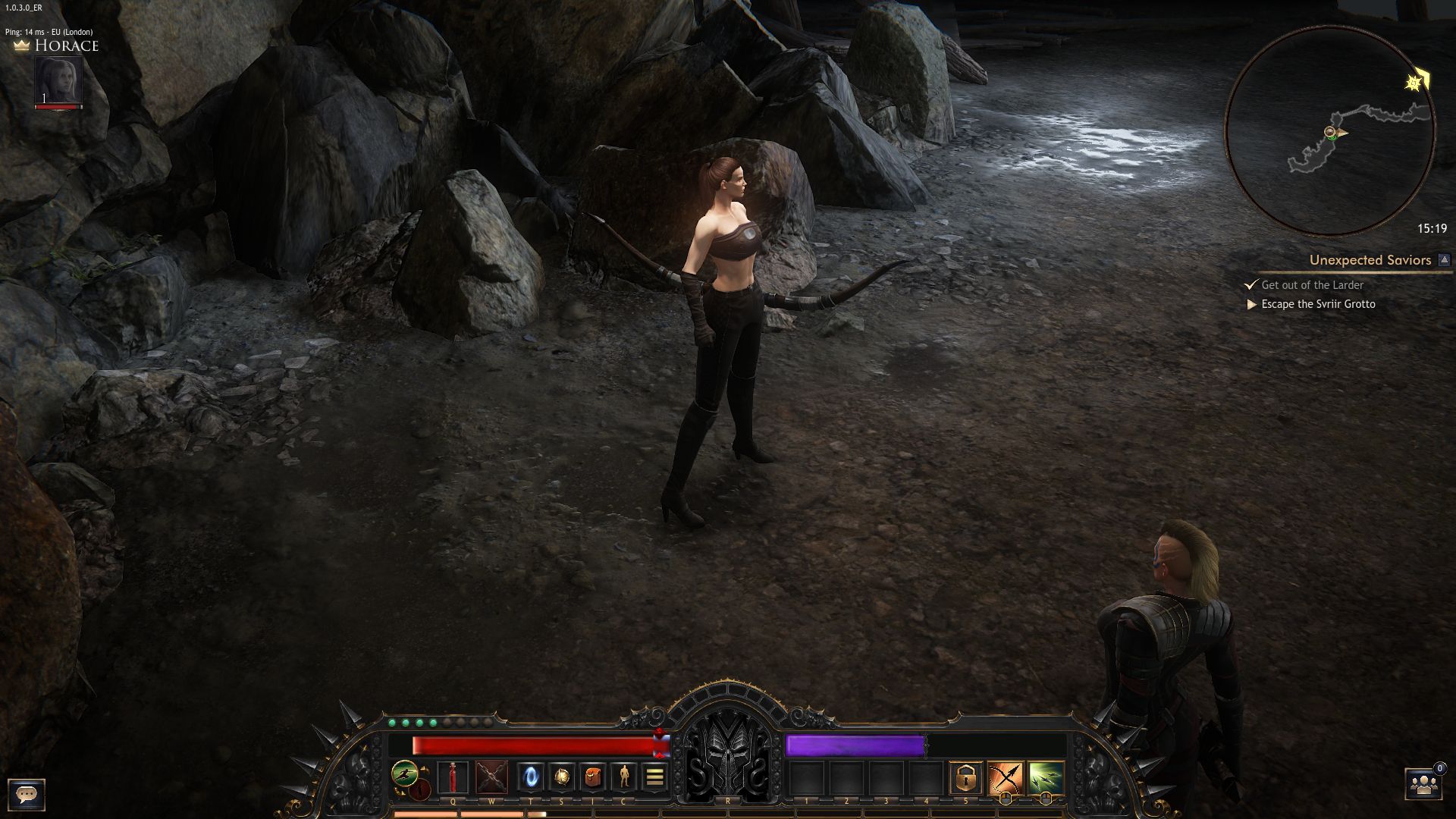 Happily she now has an actual top (and has also sourced a pistol, which is fun but not as good as the longbow. This makes no sense to me. There is no way even a terrible pistol will not do more lasting damage than a reasonably good bow).

There's more! The Gate Of Fates is a circular web of passive skill bonuses kind of like the sphere grid in any number of Final Fantasies, but you can rotate the layers of the Gate so that you can unlock whichever of the passive skills you bloody well please. It is prohibitively large and complicated, as are many aspects of Wolcen levelling (the skills also level? There are things called duplicated skills??) and all in all I am glad the guides exist.

Something else: I was running around a network of underground caves - during which the music is like if you could get an unbranded version of the grim Khazad Dum theme - and encountering loads of horrible bats. A glitch happened where I was unable to target probably about a third of said bats, which meant I had to wait until I was able to use my bomb attack to kill them indirectly. So for the entire run of the caves I always had at least one of these lads flapping disconsolately around after me. 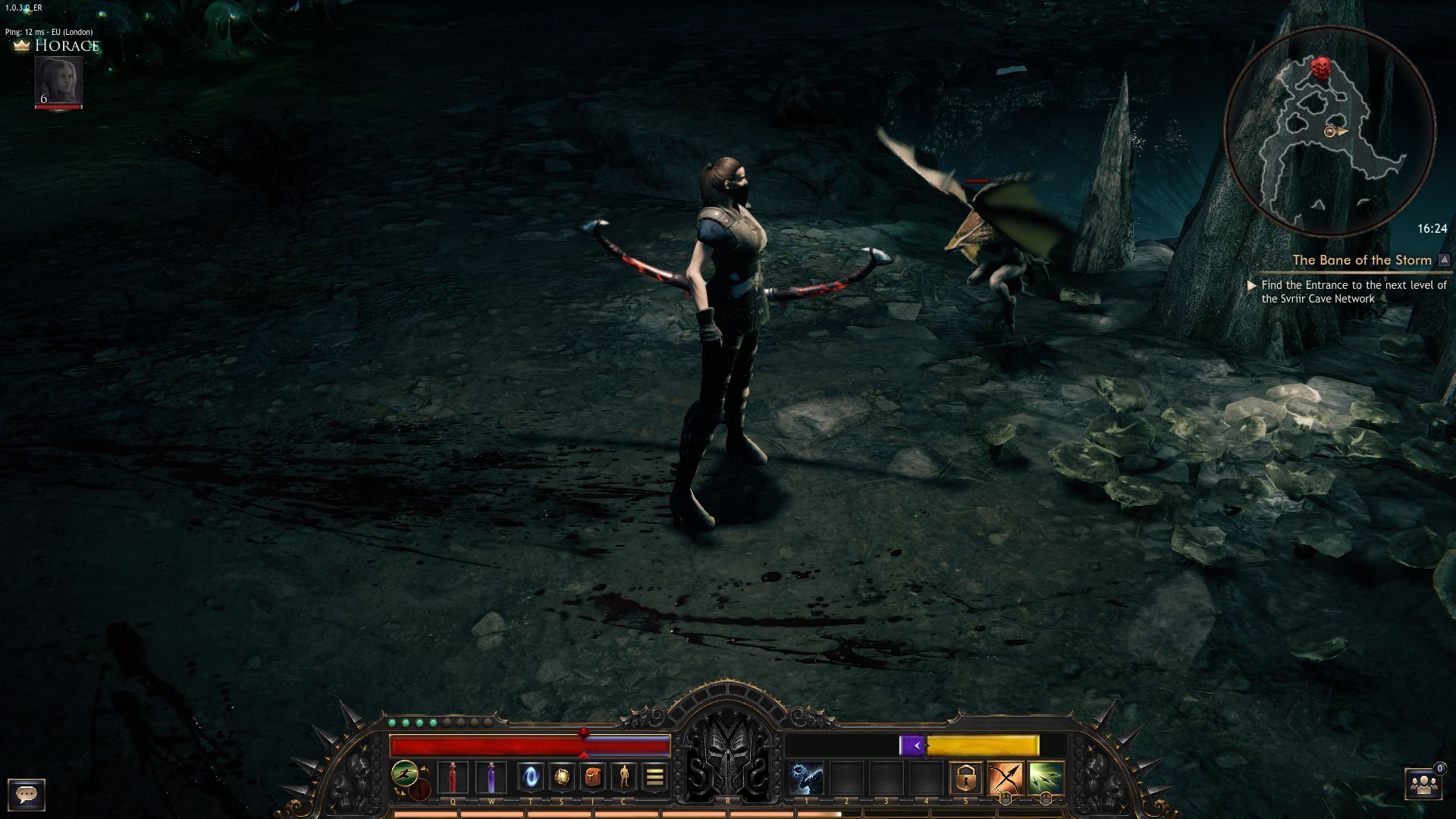 Poor little fella. Anyway, I am going to play some more Wolcen, goodbye.