It would seem that the merest mention of premium loot crates is enough to raise hackles these days, least considering the recent slew of games either having completely excised them (Battlefront 2) or are in the process of doing so (Middle Earth: Shadow of War). The next game to step up is Freejam's free-to-play build n' shooter Robocraft, which is returning to the tech-tree based progression model of its early days, with nary a dice-roll in sight.

More than just axing loot crates, Freejam are vastly overhauling the game in the vein of Star Wars: Battlefront 2. Cosmetic items are being relegated to their own special store and can be bought with premium currency, but the regular progression, unlock and equipment-acquisition loop has been decoupled from real money entirely. As you play matches, you gain XP, which turns into levels (the higher, the larger the robot you can build) and tech points, which you spend to expand your access to the equipment tech tree, each node unlocking more components that you can buy with your in-game currency from winning matches.

On top of that, there's a daily quest system coming into play that'll reward players with big chunks of XP and Robits (the currency you use to buy unlocked parts), and a major reduction in the level of XP/Currency boost that premium account status contributes, down to 25% from 100%. While most other changes in the No More Crates update are reverting to a previous state of the game in one way or another, this is probably the biggest change. Those who bought the Premium For Life status previously will retain it, however, along with its 100% boost to income. 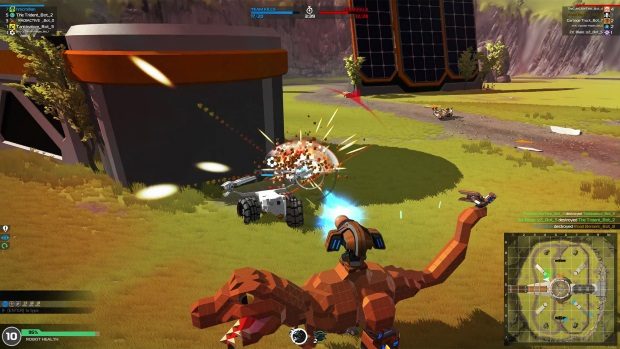 With this more structured system of progression coming back into play, they're also re-introducing robot tiers, which is something I'm less thrilled about. Under the loot-box system, it led to a lot of weird experimental builds structured around a single lucky item drop, like a shiny pair of mech legs or an especially huge gun, wheras the tech tree will mean that early players are limited to smaller, simpler equipment. As such, new players will only be matched with similarly lightweight robots without any of the heavyweight Epic or Legendary components that defined most of the more colorful designs in the game.

If all these massive, sweeping changes feel like a bit of a Hail Mary attempt to draw back players, that may be true. Freejam recently released a Battle Royale spinoff to Robocraft, and while I greatly enjoyed my time with its earliest alpha builds, it just failed to catch on with any kind of audience. Within days it had flatlined, and according to Steamcharts (unofficial, but reliably scraped numbers for active players) it is - as they say - dead as a doornail. Regular Robocraft, while not suffering quite as dramatic a fall, has slowly bled out players ever since its Steam debut, bringing it to around 1,900 players online at any given time. Not terrible, but not a great figure ether.

It'll be interesting to see just how much of an effect this major overhaul so late into the game's lifespan will have, and how well the existing community will react. I've heard complaints from a good many players that left because of the introduction of loot boxes and more random progression, but the removal of progression and tech tiers did create a new niche for players who didn't mind creating the occasional weird franken-tank. You can read the full, extensive plans for the No More Crates update here, and pick up the game itself, free-to-play, on Steam here.