Hideo Kojima's post-apocalyptic postman sim Death Stranding has finally arrived on PC, and thank goodness we were in when the doorbell rang, because we've been eagerly awaiting this special delivery for quite some time. Death Stranding comes packed with a swathe of upgrades for PC, including 4K resolutions, unlocked frame rates, ultrawide monitor support, special Half-Life missions and, of course, a great big photo mode so we can enjoy taking delightful pictures of Norman Reedus, sorry, Sam Porter Bridges' gurning face. A bit like that header image up the top there.

Even better, Death Stranding runs like a dream on PC, as my early PC performance tests showed that even a lowly Nvidia GeForce GTX 1060 can hit a smooth 60fps on max settings at 1920x1080 no problem. As such, most PCs should be able to get up and running with Death Stranding pretty easily. Just in case you are struggling with Death Stranding's PC graphics settings, though, I've put together this handy performance guide to help you get the game running as smoothly as possible.

Before we dive into how to get the best settings and the best performance from Death Stranding, let's remind ourselves of Death Stranding's PC requirements. As you can see below, Kojima Productions have laid out three specifications for their futuristic courier 'em up, and my own tests confirm that the 60fps 1080p spec can be achieved on the game's top Very High graphics preset.

Alas, I don't have either a GTX 1050 or RX 560 to see what Death Stranding's minimum PC requirements mean in practice, but I do have a couple of older graphics cards, including my trusty GTX 970, to help me find out in my performance analysis below.

I'll also show you what the game looks like on each of its various graphics presets, and which settings you can switch off to help boost your frame rate even further should you find your graphics card is struggling a bit, or you wish to push into higher resolutions, such as 2560x1440 or 4K. And remember, if you've got an Nvidia RTX card, all you need to do is switch on its clever upscaling DLSS 2.0 tech, as that can turn any RTX card, even the RTX 2060, into a 4K 60fps powerhouse. To see what DLSS 2.0 looks like in action, have a read of our Death Stranding DLSS 2.0 spot the difference article.

There are four main graphics presets in Death Stranding and you can alternate between them on the fly: Low, Medium, Default and Very High. You'll find them in Systems, inside the Options menu where there's a dedicated Graphics Settings tab. 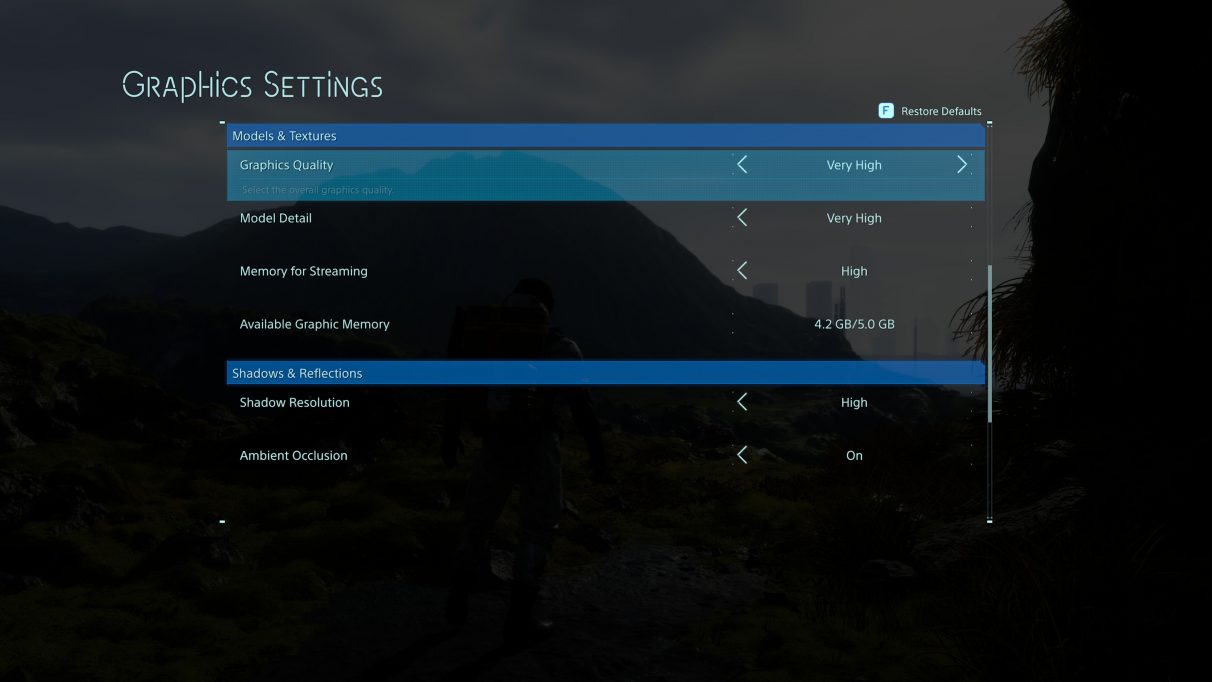 This also includes the game's Display settings, such as setting your resolution, maximum frame rate and your monitor's aspect ratio, the latter of which will be important if you've got an ultrawide monitor and want to make use of its new 21:9 support.

Here's what each graphics preset looks like in practice:

As you can see, there aren't that many drastic changes between each preset. All of them have nearly identical-looking foliage in the foreground with a similar level of detail and density, and each one has a good draw distance, too, so you're not losing too much of the game's visual impact as you scale down its graphics settings.

Low, of course, does have some noticeable differences compared to Very High - it misses a couple of those very distant skyscrapers in the background, its lighting effects aren't quite as fancy or varied, and its terrain isn't quite as complex, either. Overall, though, each preset looks pretty darn stunning, and its Low preset is certainly one of the best looking of its kind that I've seen for some time.

How to get the best settings in Death Stranding

However, if your graphics card is a bit older than a GTX 1060 or you're simply struggling to hit those lovely smooth frame rates, you can turn down the following settings to help boost your PC's performance. All the figures below are based on my own testing with my GTX 970, which I paired with my trusty Intel Core-i5-8600K processor and 16GB of 2133MHz Corsair Vengeance RAM.

On Very High, my GTX 1970 was managing an average frame rate of around 48fps at 1920x1080, but turning off Ambient Occlusion gave me another couple of frames per second, boosting my average up to around 52fps.

You can gain another small performance boost by switching off Death Stranding's Anti-Aliasing setting, but there's little need to do so when you've got the option of switching on its FidelityFX CAS support, the CAS of which stands for Contrast Adaptive Sharpening. This is a bit of tech developed by AMD, but it works on all types of graphics cards to help restore lost detail when you enable TAA (or temporal anti-aliasing). It helps to sharpen the image without taking a toll on your graphics card's performance, and I found it actually gave me a big frame rate boost, too, bumping my average right over the 60fps mark.

When enabled, you also get an additional Sharpness slider ranging from 0-100. I managed to boost my frame rate over 60fps simply by setting it at 10, but I saw further gains when I increased the level of sharpness a bit. Not by much, all told. Setting it at 25 gave me another couple of extra frames, for example, but it flattened out pretty quickly after that. 100 also produced an image that was far too grainy for my liking, so you'll have to experiment with it to find a level of sharpness that works for you. Either way, it's a good tool for bumping up your frame rate.

Shadows and lighting are often some of the most demanding effects in PC games, so toning down Death Stranding's Shadow Resolution feature is another way to help give your frame rate a small boost. Dropping it down to Medium allowed my average frame rate to creep up another couple of frames, for example, while opting for Low gave me another handful on top of that. It won't give you a dramatic improvement to your frame rate, but it all adds up when combined with the effects above.

If all that still isn't giving you a smooth frame rate, however, then you'll likely have to drop down to the next graphics preset, as I found there aren't any more individual settings you can switch off that will give you a decent frame rate bump. Sadly, Death Stranding doesn't have any Resolution Scaling features to help upscale the game from a lower resolution to the one on your monitor so you can still keep all those lovely graphics effects in play, so you'll have to make do with Default, Medium or Low depending on your graphics card.

Do not tamper with the Memory For Streaming setting. This isn't for streaming the game online, after all. This is to do with the rate at which the game 'streams in' its various assets, such as all those lovely looking rock textures and far away objects.

The more graphics memory that's available, the faster and smoother the game will run. Turning this setting down may make you feel better about the numbers in the Available Graphic Memory setting directly below it, for example (especially if your desired settings technically require more memory than what your graphics card has its disposal), but your performance will suffer as a result.

As is plainly evident from what you've just read, it's not like the game will topple over like an overburdened Sam Bridges if you choose a setting that goes slightly over your available memory limit, so don't be too put off if the numbers don't quite match up. When I tried turning the Memory For Streaming down to Low while keeping everything else on Very High, my average frame rate fell back down to the mid 40s, as it was clearly struggling to stream in those high quality assets on a restricted amount of memory.

Obviously, if your graphics card is of particular vintage and only has 2GB of VRAM, then you'll probably have to lump it and simply make do with Low from the outset, as your performance really will suffer if you try and overload it with Very High, which is double what it can handle. If your VRAM's in roughly the right ballpark, though, there should be a little bit of wiggle room.

Otherwise, go forth and enjoy, fellow postal buds, as there's not much more I can tell you. I'll be taking a closer look at Death Stranding's DLSS tech very soon, so watch out for that, and of course, if you have any tips of your own, be sure to share them in the comments below.