Legends of Runeterra takes a lot of inspiration from other collectable card games, putting a League of Legends spin on the game's theme. But the biggest departure for many will be how turns are structured. We will teach you how to play Legends of Runeterra, as well as explain the less obvious things about the game. 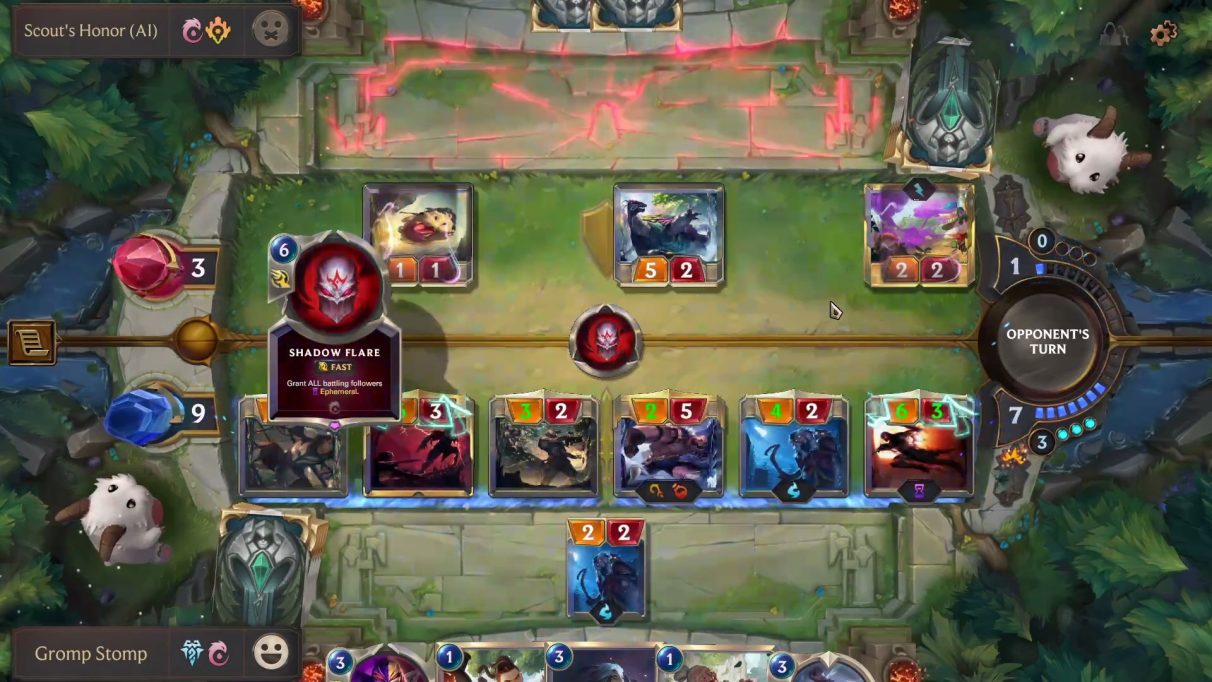 How to play Legends of Runeterra guide

Our How to play Legends of Runeterra guide will walk you through how turns work, the different types of cards that you can play, and what each of the keywords mean.

How to play Legends of Runeterra guide contents 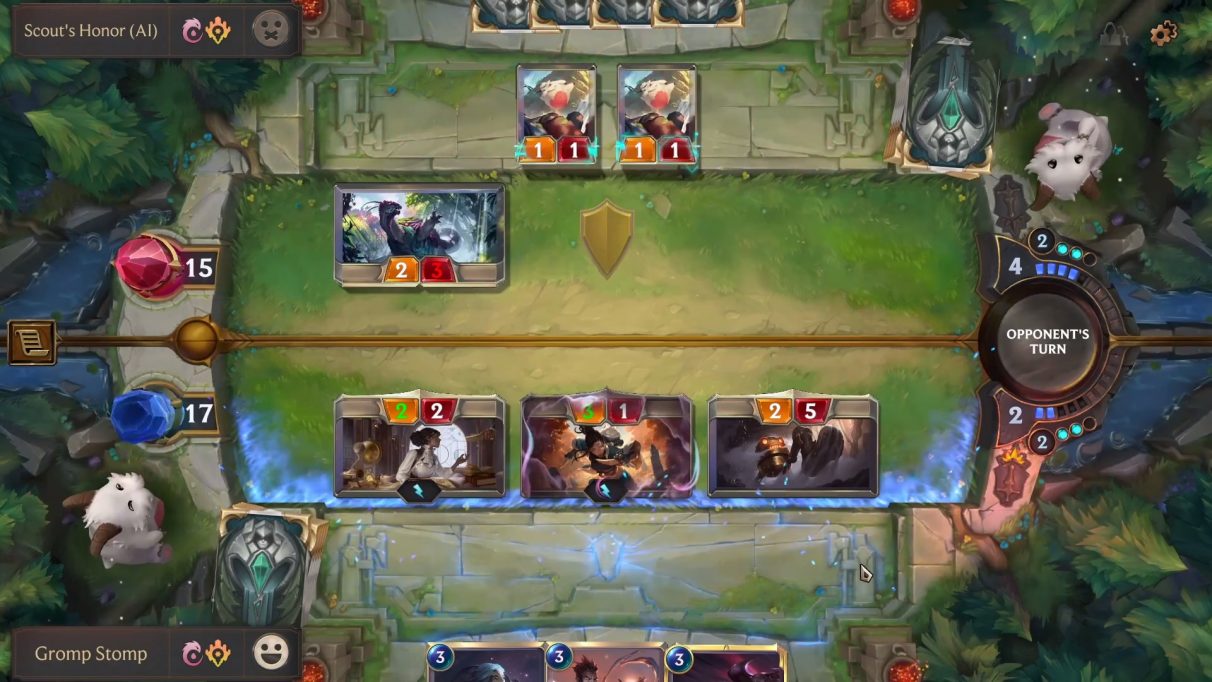 Legends of Runeterra has rounds

The aim of every game of Legends of Runeterra is to destroy the opponent's Nexus. This is represented by a life total starting at 20, shown on the left side of the screen. You begin with four cards and can mulligan any or all of them to replace them with other cards. If you act first in the game, the enemy will get to attack that round. We explain rounds in tons more detail in our How Runeterra rounds work guide. 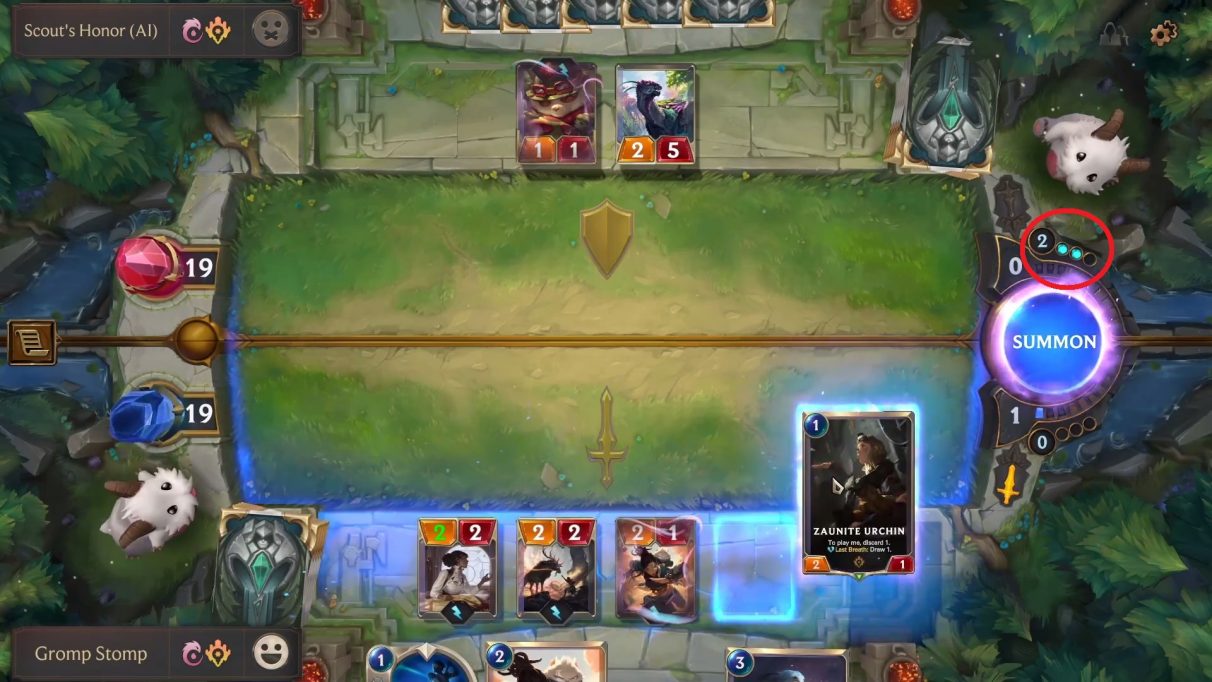 You begin each game with 1 mana, the costs of followers and spells use this resource. The amount of mana that you have each turn is shown on the dial to the right of the screen. After each round, you gain 1 mana to use for your spells, while the priority of who gets to attack will swap. If you attacked this round, you'll be defending the next round. If you had mana spare at the end of the previous round, you can reserve up to three of it as spell mana to use in subsequent turns.

After you attack in a round, you'll have a chance to play more spells. When both players pass, a new round will begin. 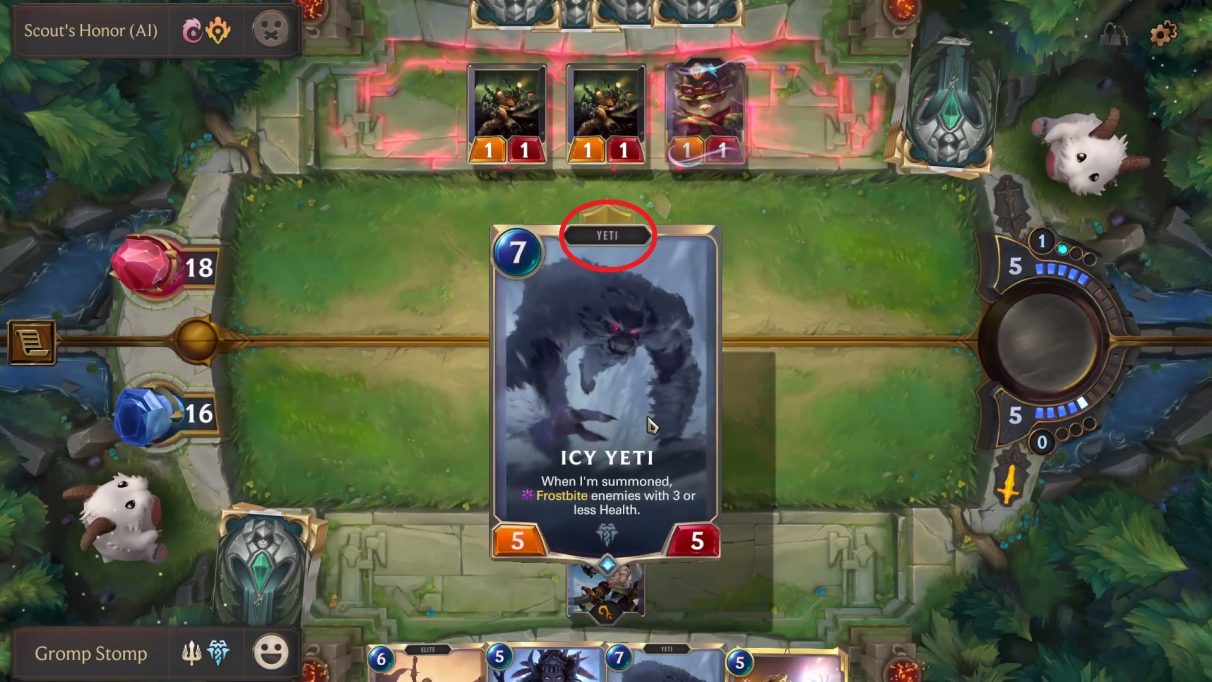 Champions and followers are different

There are two different types of units that you can summon: Champions and followers. They are summoned onto the bench, which each have an individual attack and defence statistic. These units can be sent to attack the enemy Nexus or to defend your own against enemy attacks. The difference between the two is that champions have a level up condition, while followers can't level up.

Some champions and followers have creature types, located at the top of their card. This can be anything from "Elite" to "Poro" and so on. These are usually there to indicate that there may be some cards that affect that type. In the image above, we've circled a "Yeti" and there are cards that affect Yetis in the game. 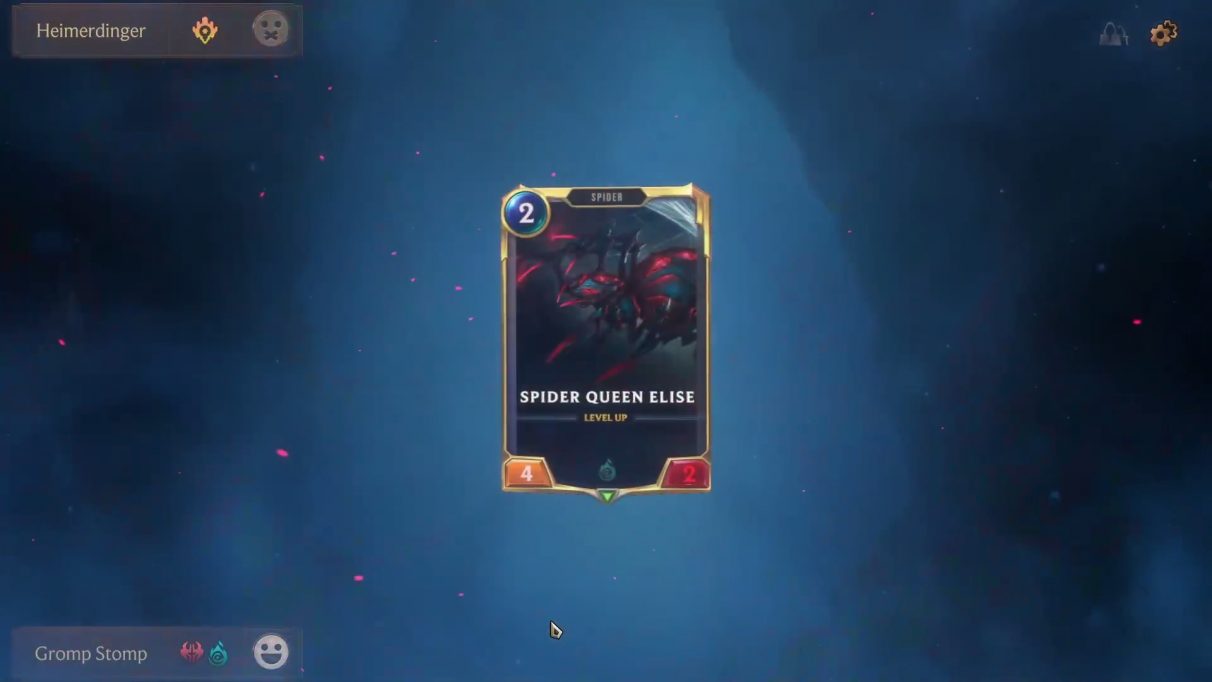 Champions in Runeterra level up

Champions tend to have an ability unique to them. They usually have a condition to level up, which is determined by the condition as explained on the card. This can even happen before you play them from your hand. For Elise, this happens at the start of the round if there are three or more spiders on your side. For Garen, it's simply done by attacking the enemy a number of times. They can also have unique abilities, such as Elise being able to summon an attacking Spiderling when she attacks. 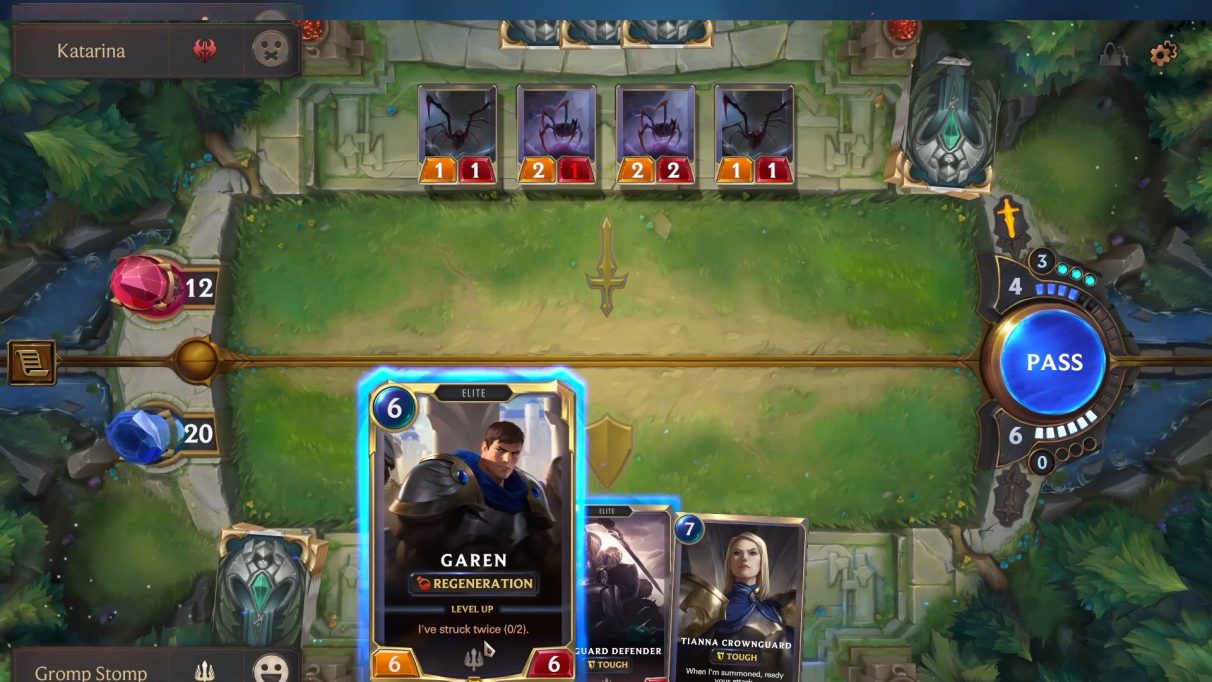 Runeterra's cards have a ton of keywords

Units can have multiple keywords on them. Right click the card to maximise the size, then click on the keyword to see what it does. We now have an entire guide based on Runeterra keywords, so do make sure you check out what each of them does and any unique interactions they have with other keywords. 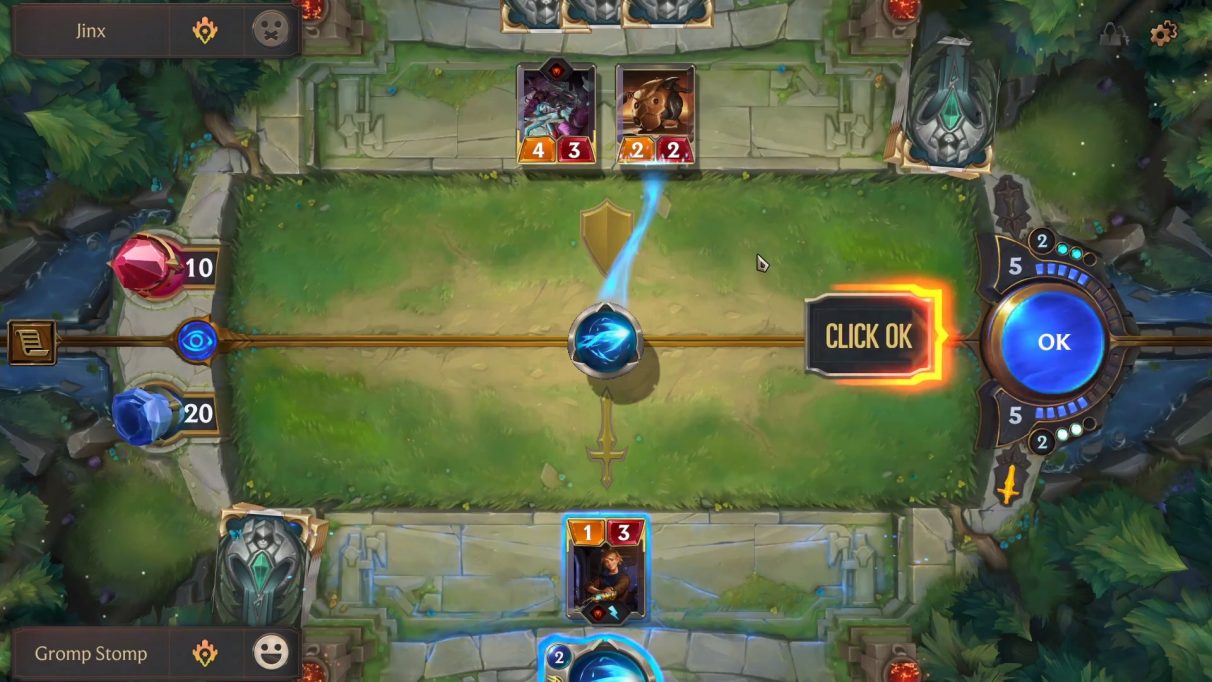 There are also some terms that specifically relate to any of the Legend of Runeterra spells.

Remember that these spells can be cast with both standard mana and spell mana reserved from previous turns. If you have up to three spare mana at the end of your turn, it will carry over, meaning you can sling 13 mana at enemies. Always keep in mind when enemy players have spare mana to use.