Phoenix Point is just one of many Phoenix Project bases that you'll bring back online over the course of your campaign to save humanity from the mutant-birthing Pandoravirus. And each of these bases must be carefully maintained and structured in order to give you the best chances of success.

Our Phoenix Point Base Management guide will walk you through how base-building works in Phoenix Point, along with useful explanations of every single building in the game, and which are the best builds to prioritise for your bases. 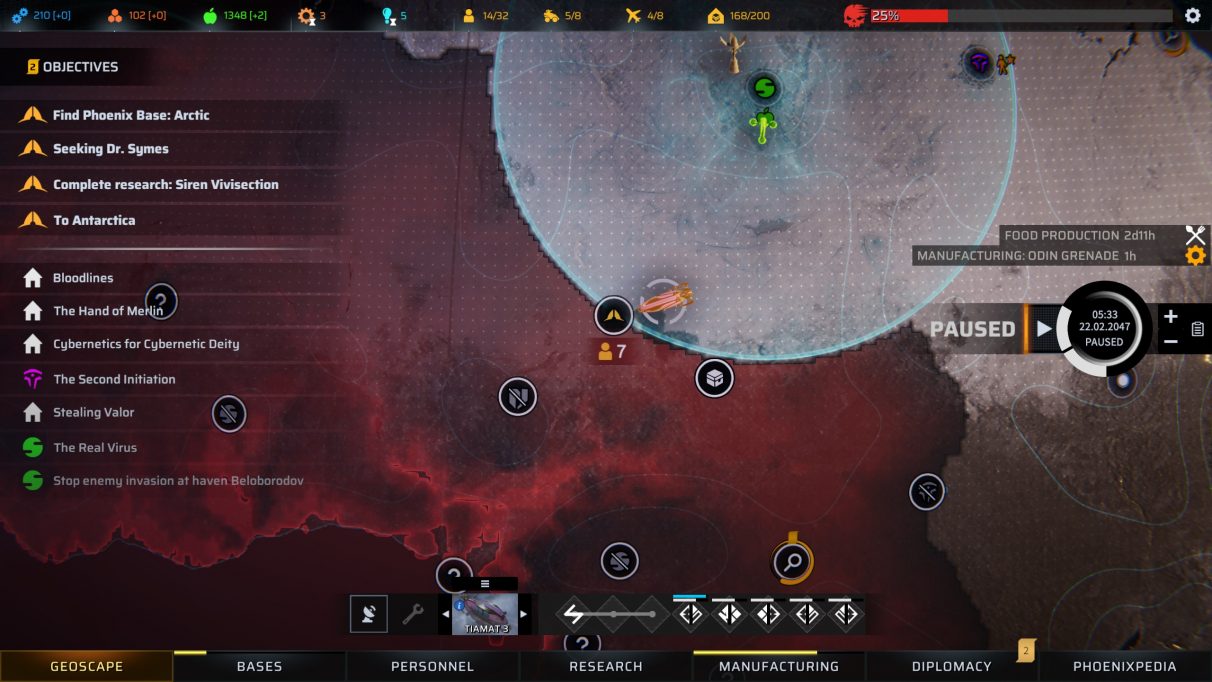 When you first start a campaign in Phoenix Point, you only have access to a single base - the titular Phoenix Point. Over the course of the campaign you'll slowly expand outwards from this starting point, conducting area scans and (hopefully) uncovering and restoring the seven other long-defunct Phoenix Project bases scattered across the globe.

All of your bases can be overseen from the Geoscape using the Bases tab at the bottom of the screen. Each base is divided into a 5x4 grid, and (with the exception of the Vehicle Bay, which cannot be manually constructed) each tile in the grid can be used to house a different structure.

There are a total of 12 different buildings that you can place inside a tile, and each one costs a certain number of Materials and Tech, as well as time required to construct it. Many of them also have an energy requirement to keep operational after construction, which means you'll need to keep on top of your base's energy supply by constructing Energy Generators whenever needed.

You can only build in a tile if you have an existing building adjacent to that tile. And sometimes there will be tiles that are blocked off in your bases (as you can see in the top-right corner of the below screenshot), which further limits your base-building and forces you to really consider your priorities. 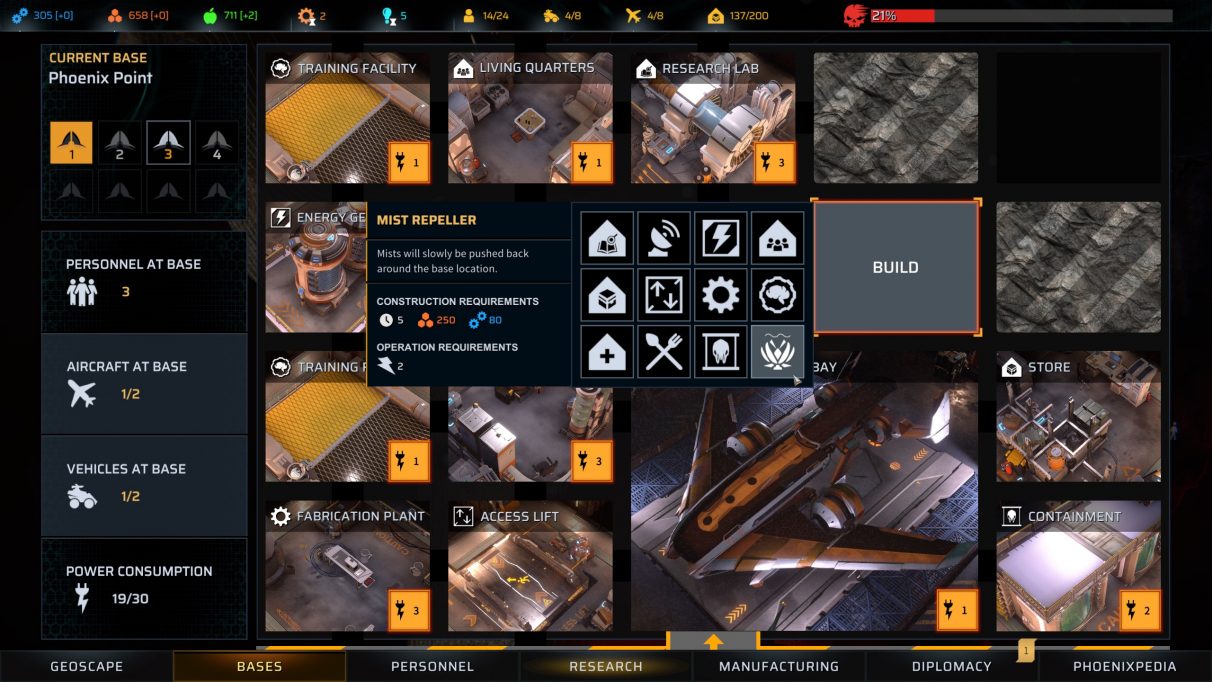 This is why you've come to read our Phoenix Point base management guide, yes? You want me to just tell you explicitly that certain buildings are better than others, and you should always prioritise these ones? Did you really think it'd be that simple?

Well, actually, it is that simple. Mostly.

There are quite a few buildings whose function is to simply fulfil a certain need, and once that need is fulfilled you don't really need to worry about building more of them. Energy Generators, for example. Or Containment, or Access Lifts, or Living Quarters, or Stores. The question is: what do you build once you've catered to all these immediate needs, and you're just wondering what else to fill up your base with?

My top pick is always the Training Facility. It's a costly endeavour, but I always attempt to build at least one (and preferably two) Training Facilities in every single base. The ability to leave your units at home and still have them earning experience and levelling up for when you need them is absolutely indispensable.

Beyond this, the Medical Bay is another excellent structure to double up on, because it'll reduce the downtime during which you're unable to explore and send your squads on missions. I also like to have a surplus of Food Production, because I like to keep my Food levels in the thousands for the purposes of trading with factions for the more in-demand resources of Tech and Materials.

Beyond that: there's the Research Lab and the Fabrication Plant, which will increase your rate of research and manufacturing respectively. Both are useful, of course, but I'd definitely give the edge to the Fabrication Plant, because I've found even on just two or three Research Labs total I have no trouble whatsoever keeping up with the curve in terms of research. Whereas anything that increases the speed with which you can produce vehicles, aircraft, and better equipment for your soldiers will always be a good thing.

Now let's take a closer look at each building in Phoenix Point, and how their costs compare to their benefits.

I'd say that sticking to just one Research Lab might be a bit damaging to your overall growth, but I've found that the Research Labs already built inside the Phoenix bases you recover generally provide enough of a boost to research, and I don't tend to manually build many of these unless I really don't need anything else built, and I have the materials to spare.

It's very nice to have multiple area scans conducted at once - although it can also be slightly overwhelming to suddenly have the entire continent winking several dozen little question marks of undiscovery at you. I can quite easily make do with two Satellite Uplinks total, but an argument can be made for three. Any more than that is a bit excessive.

An excess of Energy Generators is absolutely pointless. Most bases can remain fully functional on even a single Energy Generator - particularly if you get the Synedrion Nuclear Fusion Technology.

Stamina bars are much smaller than Hit Point bars, and therefore recover much more quickly. As such, I find that just one Living Quarters per base is enough - but I do try to make sure every base does have one.

Another building that should only be built if you really need it. Building more storage space than you need is literally just taking up space in your base that you could use on better things. Build one only when you're reaching the upper limit of  your capacity - and I'd also suggest that you demolish any Stores that are pre-built in bases you bring back online if you can afford it.

Every base should have a single Access Lift. No more, no less.

Fabrication Plants are a great way to increase the efficiency of your overall growth in power and influence. The early-game in Phoenix Point is all about a rush to bring out your first two or three vehicles and aircraft, and extra Fabrication Plants will help you to come out of this initial sprint on top.

The most underappreciated building of them all. The Training Facility is insanely useful, and I would encourage you to assign a single base per continent as your "primary" base for that continent, and build two Training Facilities there so your troops can level up even when not being used for missions.

The same is true for Medical Bays as for the Training Facility. I'd add two Medical Bays into each "primary" base per continent, so your troops have a dedicated hub to return to for periods of recovery. It's very important not to rely on a single base for this, because the time spent crossing whole continents just to heal your troops is a massive waste.

As I mentioned, I like to have a surplus of Food Production. Food is the only primary resource that you can produce in a dedicated building, which means it's the ideal resource with which to trade with other factions. I try to always have at least 8 Food produced every day on top of what my soldiers are consuming.

Read our guide on How to capture enemies in Phoenix Point for more details, but the general gist is that you only need to build more Containment when you're running out of space - and that shouldn't happen until you start capturing the really large Pandorans (Chirons and Scyllas). You can see the state of your Containment capacity from the Personnel tab in the Geoscape.

Mist Repellers are a Synedrion creation that allow you to push back the Pandoran Mist on a global scale. You might have seen them at work on the Geoscape already, as a glowing blue circle surrounding certain Synedrion havens. Building one in a base will push the Mist back, creating a safe area where Pandoran bases cannot spawn and start to threaten nearby havens and Phoenix bases.

It's a mid-game tech, and by this time the Mist will probably have begun to seriously encroach upon your territory - so Mist Repellers are a very useful method of keeping the Pandorans in check a little bit more.

A brief word on the Vehicle Bay, which is unique in three respects. Firstly, it takes up a 2x2 section of the base layout grid, rather than a single tile. Secondly, it cannot be demolished. And thirdly, it is the only building that you cannot manually build, which means the only way to gain access to one outside your initial Vehicle Bay inside Phoenix Point is to recover a base that already has one installed.

It's a very useful building, don't get me wrong. It's the only way you can heal up your vehicles outside of combat, and it also increases the number of aircraft and vehicles you can build and maintain - although capturing faction vehicles does allow you to go beyond this limit.

Now that you've got a stronger grasp of base management in Phoenix Point, why not have a look at some of our other guides? We're hard at work creating an entire series of top-tier guides on every aspect of this ambitious new turn-based tactics game, so be sure to check out the links below for more tips and strategies to get you started!