I seem drawn to games where one map is played over and over and over until I know every corner and every brick and every tiny change feels huge. A few years ago Dota 2 moving some trees would make me flip, and now I'm stoked as Playerunknown's Battlegrounds is adding a pond. But Plunkbat is also taking huge steps and adding whole new maps on its journey out of early access and beyond, with a desert level scheduled to hit alongside the full launch. We've seen screenshots and read about it before but the level has been reworked a fair bit between these fleeting glimpses, it seems. Dataminers have dug into the current test server client and pulled out a new map showing that for starters, ooh this desert is now on the coast.

Reddit user 'bizzfarts' (what a special place the Internet is) dug up a newer work-in-progress map. I've opened the data files myself and can confirm that yup, this is in there. Compare this full-size new version to the old one you might have seen in September and check out the changes. 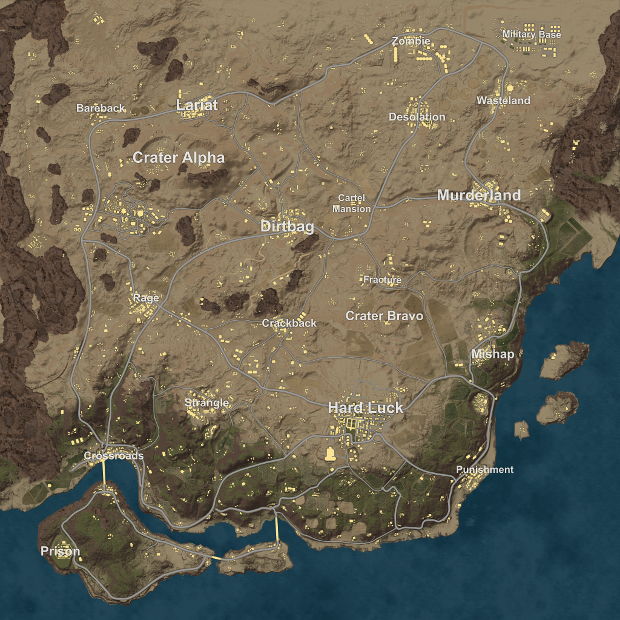 For scale, the desert map is the regulation 8x8km. It was originally meant to be smaller and for lower player counts, I believe, but that has changed.

I'm especially interested in those islands off the coast which have buildings but aren't connected by bridges. Surely they'll need high-level loot to be worth visiting? Anyone who's ever taken a boat out to Erangel's spawn island can confirm that boat trips to collect trash are still a lark but definitely disappointing.

I am sort of sorry to see the southern boundary become a shore rather than a lazy river and hills. I like meandering rivers.

All that water is also a little disappointing because boatplay is a bit boring. However, dataminers have also dug up a placeholder jet ski (or Aquarail, really). If Plunkbat actually adds those--to be clear, this could well be something the developers experimented with but have since abandoned--I'd be well up for that. I still want bicycles too, of course. That confirmed VW campervan is nice though.

I also like the desert map's town names. I'm sure they're placeholders, only there until final names are decided (I believe the map is meant to be Mexico-ish?), but they do make me wonder if, as with AMD's THREADRIPPER processors, I have consulted on these names then somehow forgotten all about it. I'm not saying that happened.

But I'm not saying it didn't.

They're good names, though, some a lot like the nicknames or improvised names that players give places. I am fascinated by how these names come about. The lads and I have our own names for places and buildings which mean a lot to us: Nobbo, Red Murder Houses, Death Valley, Butlins... But then I know that the spot we call Good Houses is known as Fight Club to another group.

Mishap? Murderland? Maybe it was me.

Either way, we should expect to play the desert map ourselves in... not forever? One of the other big changes coming before Plunkbat hits version 1.0, the climbing & vaulting system, is already on the test servers (but only for another few hours). Developers PUBG Corp. are still talking about launching Plunkbat out of early access by the end of December so, if that holds (will it? dunno), the wait can't be too long.