Fleet Battles is the main game mode in Star Wars: Squadrons, and it's a pretty tricky mode to wrap your head around. There are Capital Ships, there are Flagships, there are AI ships and player ships, there's Morale and you're constantly switching between attacking and defending... Our Fleet Battles guide looks to straighten things out once and for all, explaining exactly how Fleet Battles work and also clearly illustrating how to take down Capital Ships with ease.

Fleet Battles in Star Wars: Squadrons are pretty complex, and it's easy to feel lost and have no idea what's going on when you're fighting in one. Let's go over how Fleet Battles work as clearly as possible.

Fleet Battles is a 5v5 game mode. Each squad of 5 is supported by numerous AI starfighters, along with three Capital Ships each. One of these Capital Ships is the Flagship of each team, and if it is destroyed the game is over and the opposing side wins.

The smaller enemy Capital Ships (Frigates for the Republic, Cruisers for the Empire) must first be destroyed before the Flagship can be targeted. Your squad isn't alone when fighting these Capital Ships: whenever your team tips the scales and goes on the offensive, you'll be joined by a large ship (not quite Capital Ship size, but still pretty giant) which automatically attacks the nearest enemy Capital Ship. These attacking ships are called Corvettes (for the Republic) and Raiders (for the Empire). As defenders, destroying a Corvette or Raider will grant you a big Morale boost.

A match will dynamically adjust between different phases of attack and defence based on each team's Morale. Killing enemies earns Morale, while losing ships will cost Morale. If a team fills up the Morale Bar at the top of the screen, then the phase of the battle will change. If you were previously defending, you'll now be attacking - and vice versa. 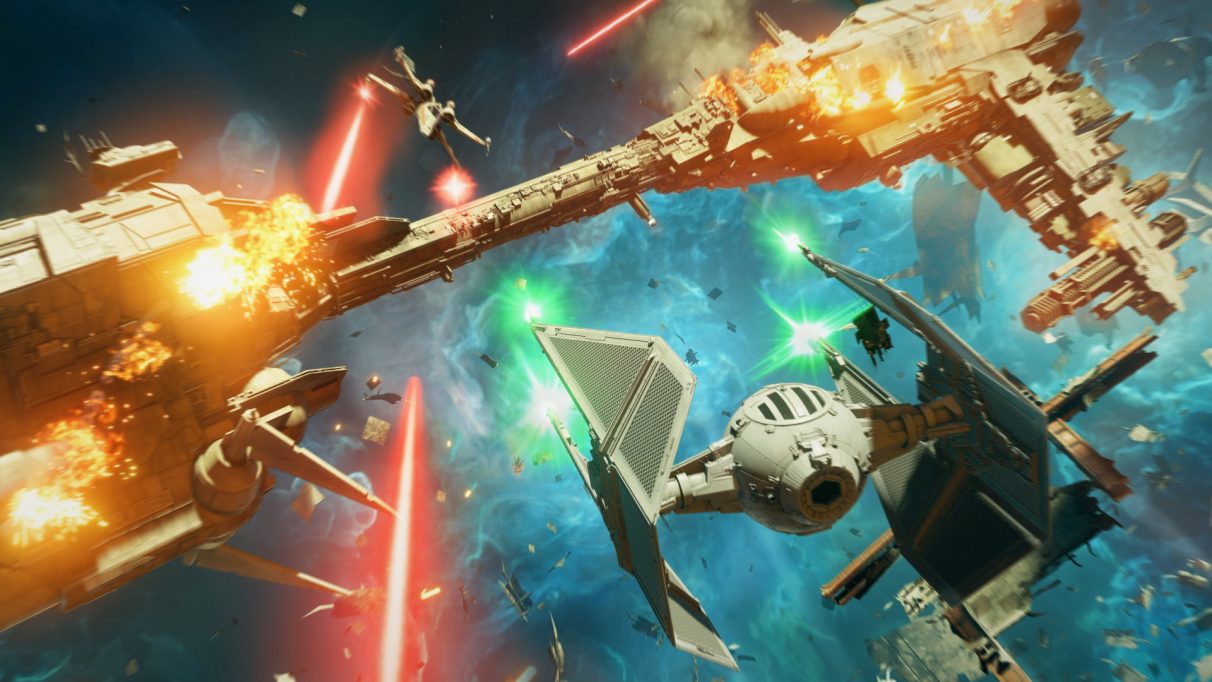 How to keep track of what's happening

The current state of the battle can be viewed at any time by opening the menu and viewing the map. Wherever the Front Line is, that's the current objective, and it will show who is attacking and who is defending.

The other key thing to check constantly in Fleet Battles is the Morale bar at the top of the screen. Not only will it tell you the current phase and objective of the battle, but it will also warn you when the tides are about to turn. This is very important, because Capital Ships are far, far more powerful when behind the front line than when they're on the front line. So if you're busy attacking a Capital Ship, and suddenly the battle shifts and your team is on the defensive, and you're caught beyond the front line, then you'll almost certainly be torn apart.

To summarise: earn Morale by getting kills and staying alive, defeat the enemy Capital Ships and then the Flagship, keep checking your Morale Bar and the map to make sure you're not caught beyond the Front Line.

The Flagship of each fleet is a gigantic spacecraft with far more health and shields than the smaller Capital Ships on each side. Like Corvettes, Raiders, Frigates, and Cruisers, the Flagships are covered with turrets and are protected by hardy shields - but they differ from the smaller vessels in two ways:

These subsystems can be individually targeted and destroyed to make the Flagship more vulnerable in specific ways. Here's what happens when you bring down each subsystem:

Below is an annotated screenshot of the various subsystems of the MC75, the Republic Flagship: 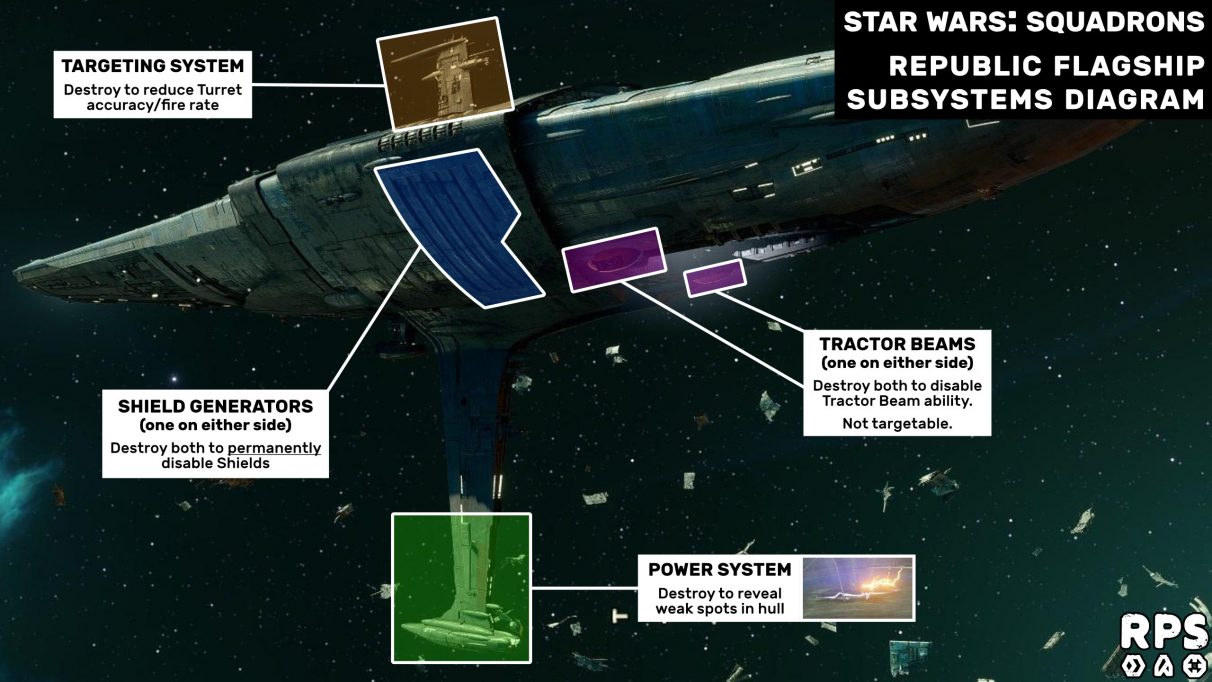 Here is a similar diagram illustrating the locations of the same subsystems on the Empire's Flagship, the Star Destroyer: 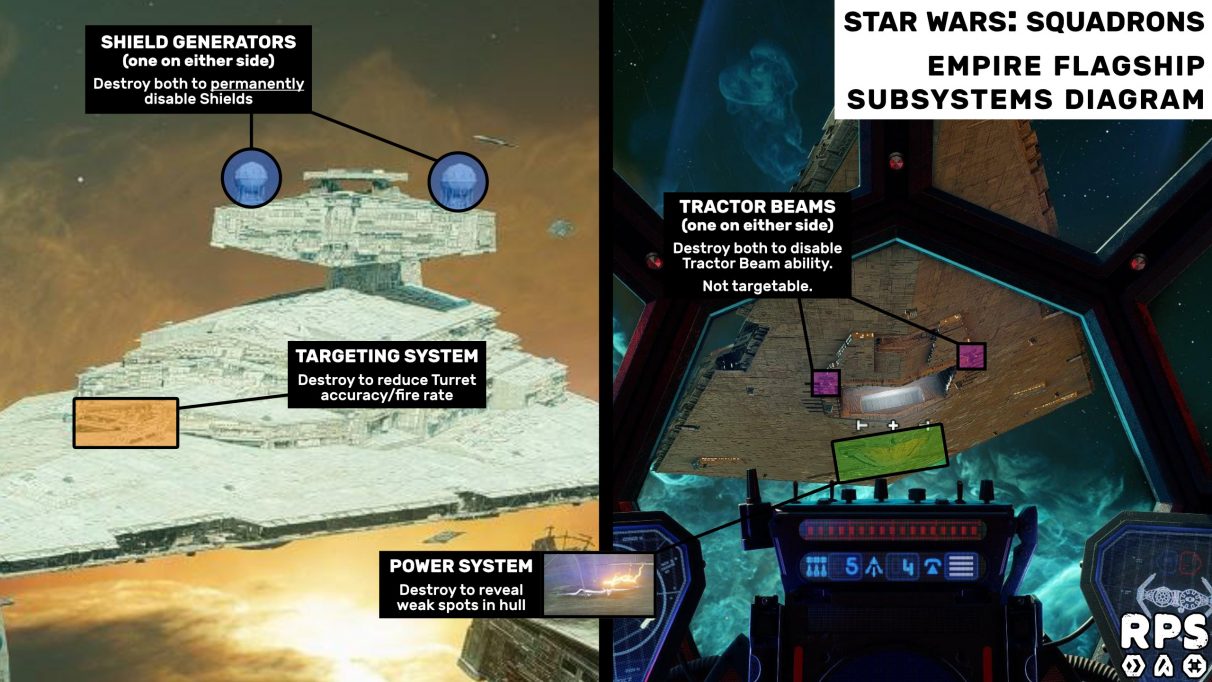 While it is possible to bring down a Flagship through brute force and damage without any care towards the subsystems, targeting those subsystems will give your squad a far easier time attempting to win the match. There are no hard rules on the order in which you should target these subsystems, but I've found great success with the following strategy:

By the time you've destroyed every subsystem, the Flagship's health should be pitifully low, and a final bombing run is often enough to take it out completely and win the match for your squad.

How to win Fleet Battles quickly

Now let's go through a few key tips and tricks on how to win Fleet Battles in Star Wars: Squadrons quickly and decisively.

That's everything you need to know about winning Fleet Battles in Squadrons - but if you're after more handy tips and strategies, be sure to check out our Star Wars: Squadrons tips page!