Your card selection in Legends of Runeterra might be somewhat limited to start off with. In order to get more cards, you'll either need to buy stuff from the store, or gain as much XP as possible. There are both weekly vaults and reward tracks that contain a bunch of free cards that you can use to build decks.

In this Legends of Runeterra vault guide I will be explaining how to gain XP quickly, as well as go into detail about the weekly vault and the region rewards. I've also added some more details on the odds of getting certain items as weekly rewards, experience needed to get said rewards, and the chances for your rewards to be upgraded. 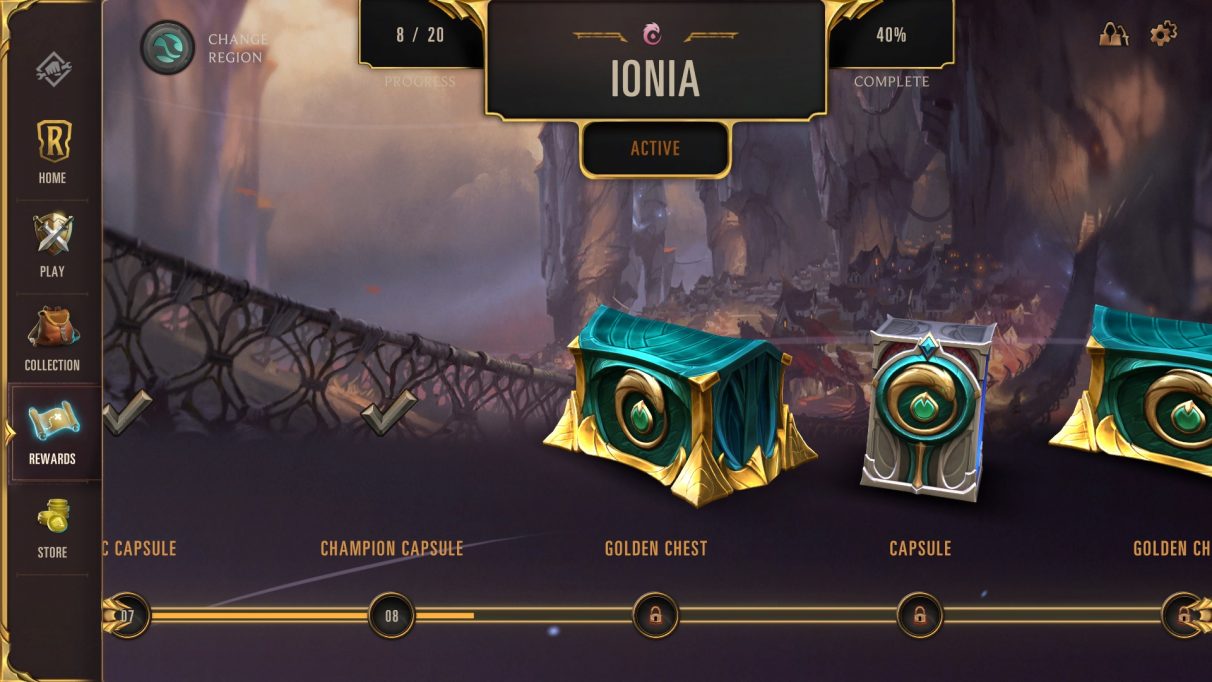 One set of rewards that you can get are Region rewards. These are separate from the weekly vault, but you won't be able to access the region rewards until you have opened all of the Prologue rewards. These Prologue rewards require XP gained via completing daily quests and playing games either against the AI or other real players. They contain capsules and chests that contain new cards, as well as wildcards for creating new cards.

Once all of the Prologue rewards have been obtained, you'll then get to choose a region. Each region has 20 levels, with an increasing number of XP required to get each reward. They all contain a variety of reward types:

It's worth noting that changing the region you are getting rewards for requires that you select the new region, then click the "Activate" button. You won't lose progress on the previously selected region if you switch and can switch back at any time between games. 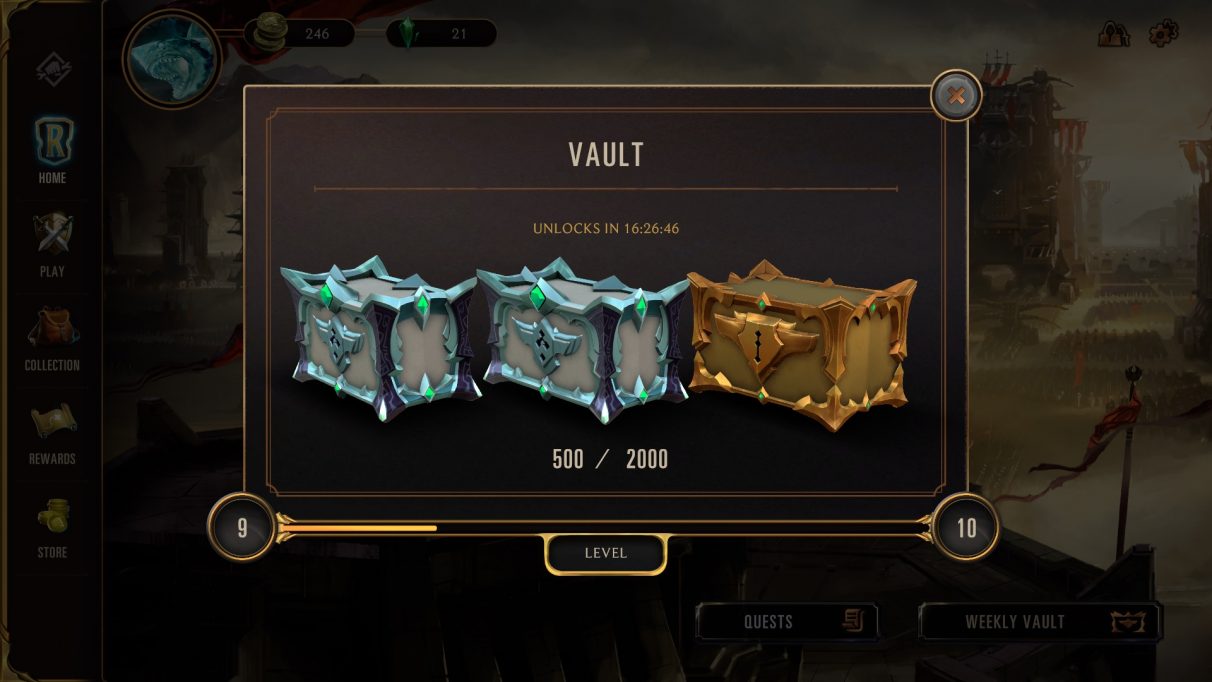 There's also the weekly vault, which is a set of weekly rewards that open on Tuesdays. You need to accumulate as much XP during the course of a week to increase the value of the contents inside of the weekly vault chests, which contain either new cards or ways to make new cards. For building the Runeterra best decks, you'll want as many cards as possible.

Runeterra's weekly vaults can contain a maximum of three chests that are opened at a set time. There are 13 levels in the Runeterra weekly vault, with a level 13 chest containing three diamond chests and a guaranteed Expedition Token. Here is a full list of rewards, the experience needed to level up, and the total experience needed to get that level up:

Diamond chests have up to ten common cards, up to five rare cards, up to three epic cards, and a potential champion card. Some cards may also transform into wildcards of that rarity. Each Diamond chest also contains a large sum of shards that can be spent on generating new cards, and below is the total amount needed to craft new cards:

As for when you'll be able to open the rewards, the weekly vault opens every week on Tuesdays at around 2:30 UTC. The XP track is then reset for the next week's weekly vault. 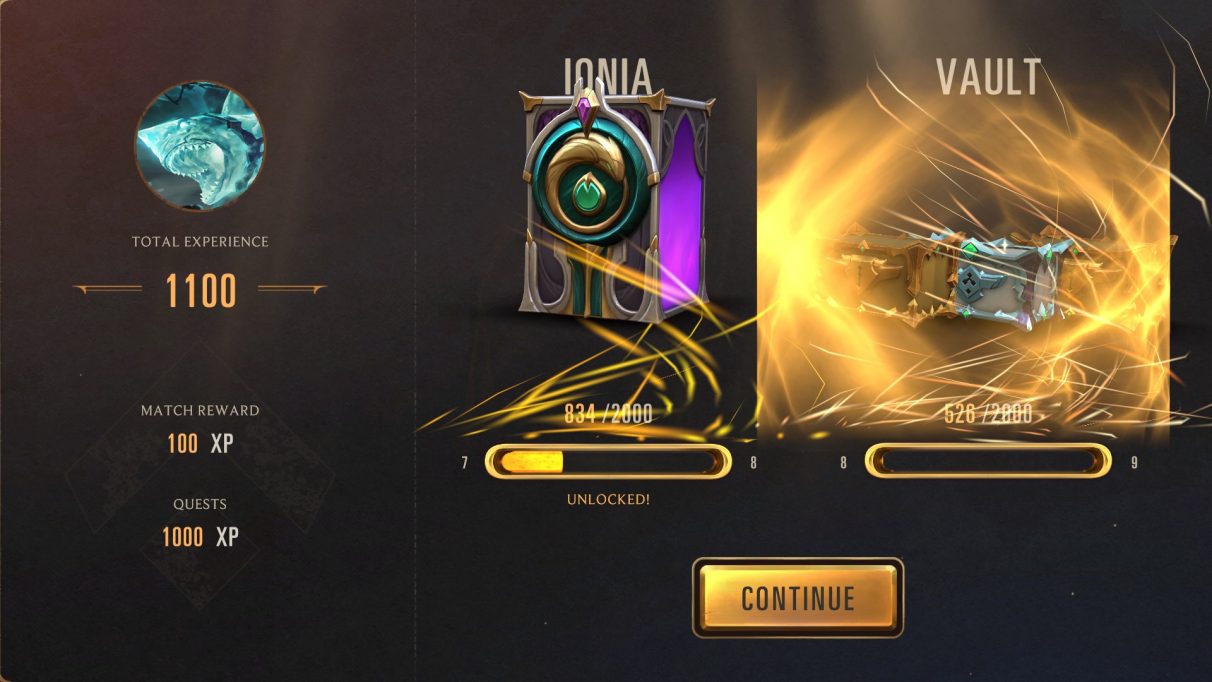 If you want to maximise how much XP you will gain to unlock rewards in the Runeterra weekly vault, then here are some top tips.

Aside from the below XP rewards, there are also some rewards for winning 6 expeditions (1500 shards, a random champion card, and a golden chest) and winning 7 expedition matches (3000 shards and a champion capsule). 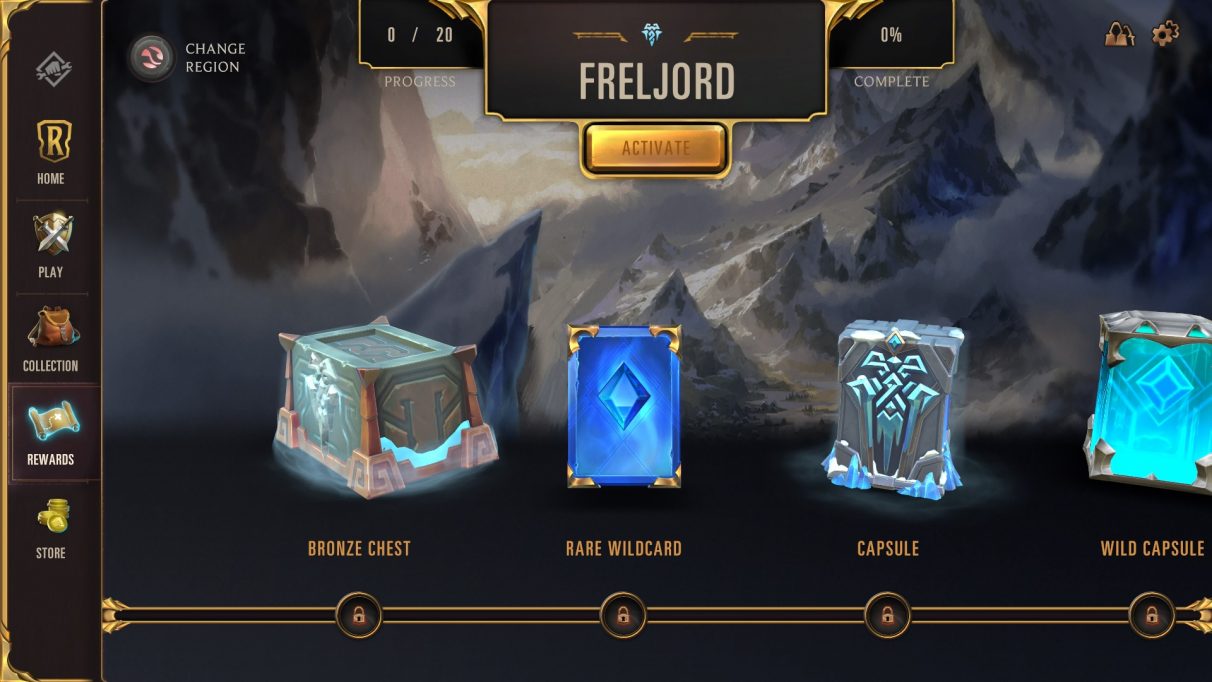 Occasionally, you'll find that a reward that you get for unlocking the weekly vault, such as the chest or capsule you're unlocking or the cards inside a chest/capsule, will be randomly upgraded. This is because every card and reward has a set percentage to upgrade to the next level or be turned into a wildcard variant if it is not one already. Here are the odds for Runeterra reward upgrades:

And that's it. Thanks for reading this Runeterra vault guide. There are plenty more useful guides in our hub for Legends of Runeterra, including how to make the best decks, some tips for the Expeditions mode, and clarifications on how keywords and cards interact with each other.