In Fallout 76's Wasterlanders update, we finally got to see actual living people return to the region. Most are just regular guys and gals trying to make a living, but there are some that have banded together into factions: raiders and settlers. We'll go over everything we know about both of them here.

This Fallout 76 factions guide will tell you everything you need to know about the Raiders and the Settlers, such as how to improve your standing with them. Note that this guide will be going over the new factions in the Fallout 76 Wastelanders update exclusively.

Those looking for a beginner's guide to get started with the base game should have a look at our Fallout 76 guide. 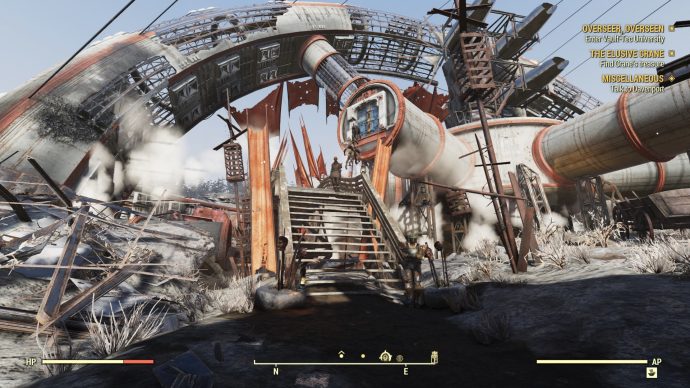 How to meet the factions in Fallout 76

You will need to be approximately level 20 to really get this quest started. You'll get a transmission on your radio from the Overseer asking those from Vault 76 to meet her at her house. It's not too far from the newly raised settlement just south of the Vault. Head there and inside you'll be reunited with the Overseer who asks about inoculation. This is related to one of the story quests in Fallout 76, so complete that then come back for a briefing.

She'll ask you to make contact with two factions: the raiders and the settlers. The settlers are the simpler faction to meet as all you need to do is head to their settlement, talk to Paige, then go and check on the status of the camp dispatched to the south. Upon giving him a report, you'll be able to convince him of the need to vaccinate his people against the Scorch.

The Raider leader, Meg, is a bit more difficult to convince. You'll need to head to the Top Of The World, which is in the Savage Divide. There you'll need to talk to Rose and do some quests for her involving the retrieval of a statue and setting up a communication tower. Once you've done all of that, you'll need to clear out the first floor of enemies before Meg arrives. Give her the statue and accept her request to check up on a raider group she sent out south of their camp in the north. Go there, see what happened, then give her the news.

Once you have met both factions, return to the Overseer in her house. She'll ask you to come to the Nuka Cola factory to the west. Inside, she'll assist you in concocting an inoculation beverage and with the production of the new drink. Once you've made the drinks, head to both camps and deliver the package to both leaders. You'll then go up in reputation to "Cautious" for both factions. Return to the Overseer's house to get a reward and continue the Wastelanders story line.

What do factions do in Fallout 76?

For each of the factions, you'll be able to do quests via the NPCs in each of their camps. Doing favours will increase your standing with them and increasing your rank beyond "Cautious".

The factions each give different rewards, so here are all of the rewards we currently know of and where we know more about each one, where you get them:

We will update this when we know more about each of the two factions.

You should now know everything we know about the factions in Fallout 76. We hope you'll check back soon as there's the many quests that the game has throughout the ruined world of Appalachia, what each perk card does, and what you need to craft certain weapons. But for now, do check out the rest of our guides below: