The big free update that brings human folk back to Fallout 76's desolate West Virginia is launching next week. Settlers and raiders have moved back into the Appalachian hills to rebuild and hunt for treasure. The new factions are claiming territory too, which might conflict with the C.A.M.P. you've already built. Bethesda posted a handy map so you can make sure you aren't living somewhere that the new wastelanders will kick you out of.

Like Fallout 4's settlements, Fallout 76 lets players craft and build a space of their own on the map. Players have done some absolutely lovely things with their camps, from making art galleries, deadly schools, and extremely impressive bars. If you've got one such creation of your own, you'll want to take a closer look at the map that Bethesda tweeted today.

As Fallout 76 is online and all players are allowed to build on the map, conflicts do already occur between camps. When that happens, Fallout 76 asks if you'd like to find another server to join where your camp's space is free or if you'd rather leave it unloaded. Now, the new Wastelanders update is bringing NPC humans and their own structures to Appalachia and you can't just scoot off to another server to escape them. If your camp is built in one of the zones indicated on the map below, you'll want to move it elsewhere to avoid conflicting with the new residents. 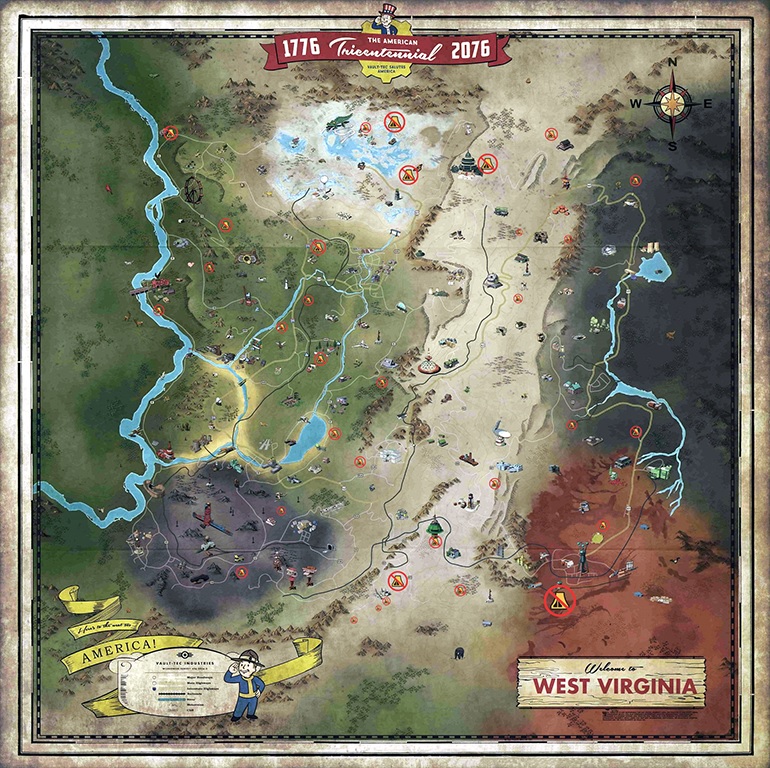 Some obvious spots are chosen, based on what we know of the Wastelanders update already. The northmost center location on the map is where the new raider faction have build their town The Crater while the settlers have holed up at the spot adjacent to Spruce Knob in the South-ish center. The big no-no spot in the southeast corner of the map is presumably part of the new Watoga Underground area.

Bethesda confirmed to players that if they are living in a no-build zone they will be allowed to move their C.A.M.P. without paying the usual in-game cap fee. Since this map isn't exactly precise, you may be able to spot-check your camp by attempting to move it and seeing whether you have a fee associated with the move or not. I've not personally tried that yet though, so your mileage may vary.

Fallout 76's Wastelanders update releases free for all players next Tuesday, April 14th. It's also launching on Steam the same day. You'll be able to claim a free Steam copy of the game if you already own it on Bethesda's launcher.