Some variants in Monster Hunter: World's Elder's Recess may be somewhat subtle, but the Lavasioth is basically a fiery version of the Jyuratodus. But merely dismissing it as a clone would be foolish as changing its habitat from muddy water to lava makes all the difference. This self-cooking fish is a lot more dangerous than it would first appear and has some rather devastating attacks to boot. This guide will go through the Lavasioth's list of moves and how to dodge them, as well as tell you what is its weaknesses and how to kill it.

Lavasioth can and will make those unprepared for any of its attacks pay a huge price, but it's the other monsters roaming in that can make things trickier than they need to be. Therefore, you will need to make some dung pods to fire at wandering monsters. You can still look at our Monster Hunter World guide to get some general tips for what to do when preparing your gear, as well as a plethora of other articles with full equipment lists for your perusal. 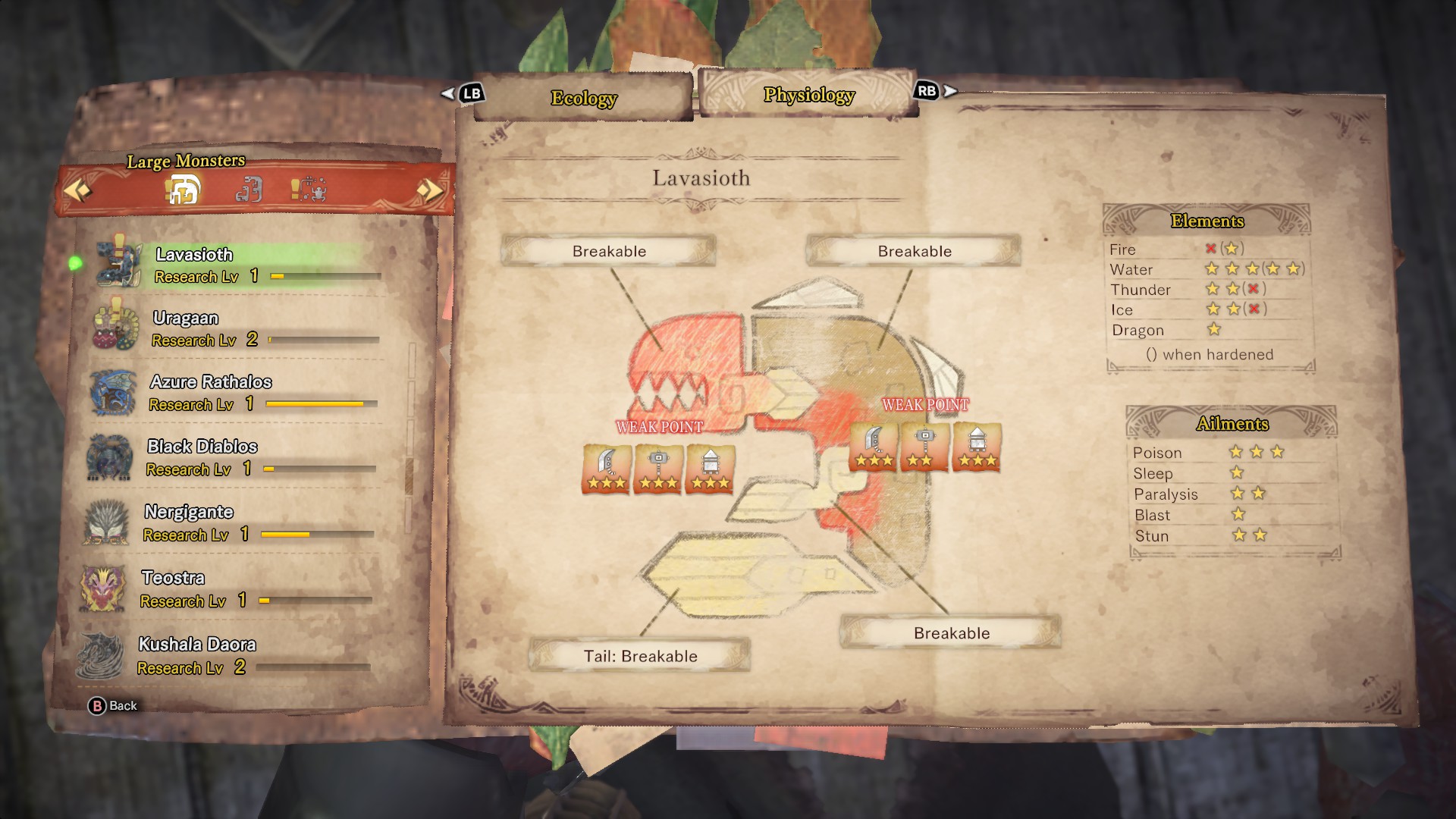 Much like its Jyuratodus cousin, this is one of only a few monsters that can modify its weaknesses on the fly. It does this by hardening its skin, which makes trying to hit it with certain weapon elements really difficult. It initially starts with a resistance to fire that only increases to one star upon hardening, so don't try to use fire weapons. Those using both thunder and ice will have some success until it hardens, to which it gains a resistance to both elements. Really the only way forward is to use water, which it starts out weakest to and only drops one star upon hardening. Dragon is unaffected by the hardening, but is generally not recommended unless you don't want the hassle of worrying about resistance changes.

Thankfully none of this really applies to ailments. Poison is the ailment to go with as it's most susceptible to its effects. While paralysis and stun can be good in a pinch, trying to put this hyperactive fish to sleep or trying to make it explode is a rather futile effort as it just won't work well.

Lavasioth's weaknesses are its belly and head. Generally you should be using either bladed or ranged weapons, as blunt weapons are not as effective at smacking its chest with. It has four breakable parts, including the head, back, fins, and tail. Its tail can't however be cut off, so you'll always need to dodge its tail whip. I personally found that bladed weapons worked the best, though ranged weapons allow for you to carry on the assault when it ventures into the lava. 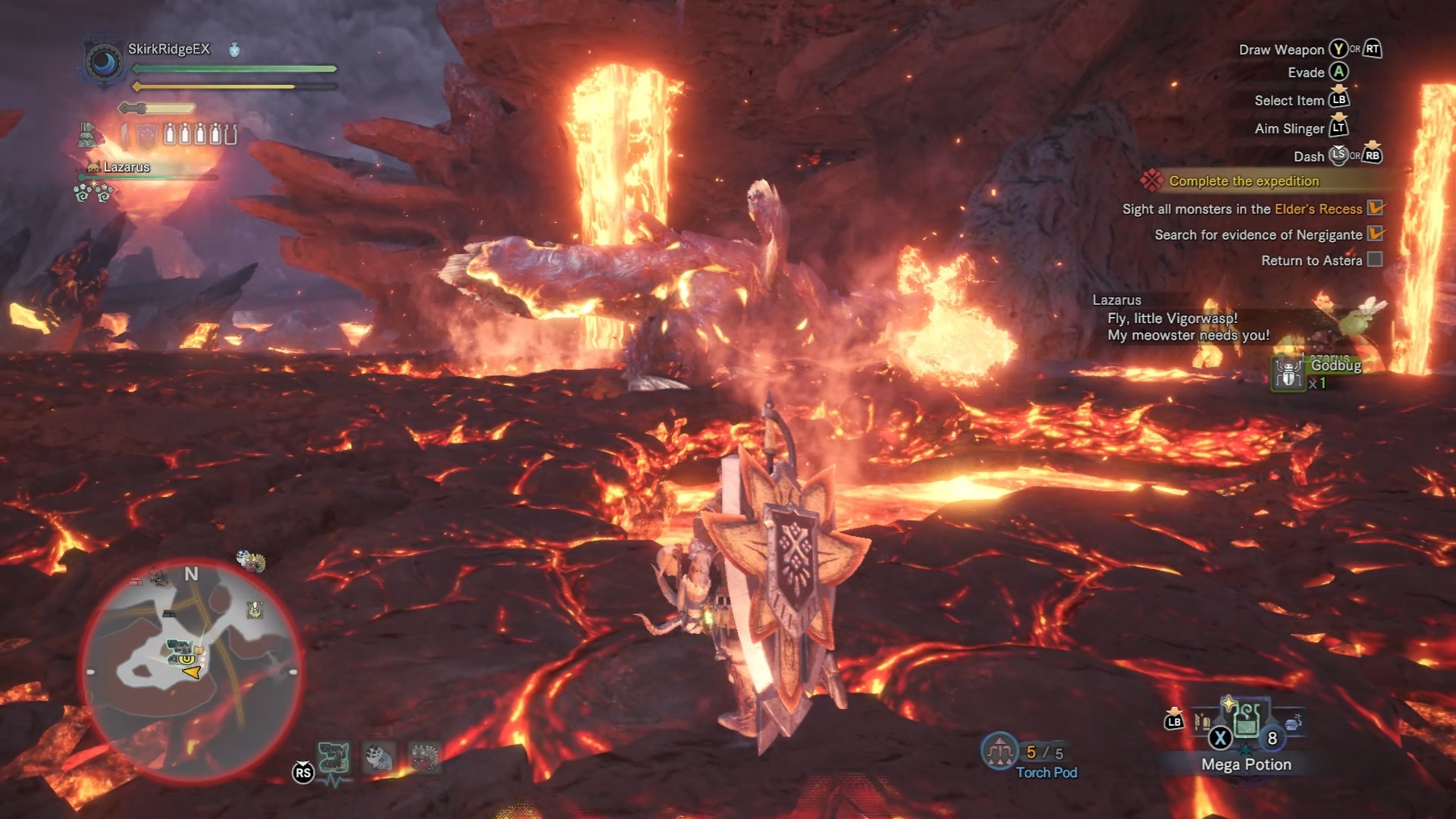 This fish is a lot tougher than its muddy brethren. For starters, while it shares the charge, Lavasioth has a small degree of tracking and can even snake around you to hit from behind. Give it a wide berth whenever it does this as it can be tricky to avoid otherwise. It also has the tail swipe, but this one can stun you for a short time, leaving you open to one of its ranged attacks.

The first magma spitting attack takes a small windup and can be dodge rolled out of the way. Its second one is more dangerous, as it rears up to prepare before spitting a huge blob of magma. This hurts a lot and can burn you as well, so make sure you're running sideways for a long distance to avoid this attack.

Whenever it dives, be wary that it can perform multiple moves from this state. It can rise up to spit a standard magma ball, as well as the rising attack where it sharply comes out of the magma on its target's position. These are easily dodged, particularly if you keep running and dodging.

Other monsters can also make this fight a pain, mostly because it likes to ambush the likes of Dodogama and Uragaan from underneath. Coupled with the fact that Lavasioth can trigger the explosives from both creatures and it makes for a rather painful experience. Therefore, bringing dung pods to repel them is advisable.

Eventually, Lavasioth will retreat to its lair. Sometimes you'll even find it swimming there upon first seeing it. Here it gets another attack and it's by far the most dangerous. It will leap from below you through one of the holes onto the platform, while at the same time a lot of magma balls will spread across the platform. Look for shadows if you can, but the safest way to avoid this is not to be on the platform at all. It won't use this all that often, so you're going to get a few hits in while it's above ground.

What materials can I get from Lavasioth?

That's it for our strategies for Lavasioth. There's still a few more Elder Dragons to slay, not to mention the numerous post-Zorah Magdaros large monsters that are also now roaming around. Those who want a refresher on the previous monster should check out our Monster Hunter: World Dodogama guide. We're covering the optional monsters first as there's a fair few good materials that should put you in good stead for the upcoming Elder Dragon fights. There are three more monsters that have appeared elsewhere, though some do occasionally make the trip to Elder's Recess. We'll cover the one that doesn't next time, so head to our Monster Hunter: World Black Diablos guide for more on hunting this tougher variant on an already tough monster.