The new Nvidia RTX 3080 may still be almost impossible to get hold of, but as an indicator of what the next generation of 4K graphics cards have in store for us, it's definitely one to watch for anyone looking to upgrade their PC in the coming months. Indeed, we've already seen what kind of a leap it offers over the existing RTX 2080 and its Super-fied sibling in my Nvidia RTX 3080 vs 2080 showdown, but today I thought I'd take a closer look at how it fares against Nvidia's previous top-end flagship, the RTX 2080 Ti, a card that has always cost at least £1000 / $1000 ever since it came out at the end of 2018. Can the £649 / $699 RTX 3080 pose any kind of threat to Nvidia's best 4K best graphics card? Let's find out via the medium of some lovely graphs.

To test the RTX 3080 and the 2080 Ti, I put them head to head in my general games benchmarking suite, taking an average frame rate from either their own built-in benchmark tools or from my own repeated manual gameplay tests. The games includes Shadow of the Tomb Raider, Total War: Three Kingdoms, Final Fantasy XV, Monster Hunter: World, The Witcher III, Assassin’s Creed Odyssey, Metro Exodus and Forza Horizon 4.

For this particular test, I used the Nvidia Founders Editions of the RTX 2080 Ti and Asus’ TUF Gaming GeForce RTX 3080 OC Edition, as these were the cards used in my individual GPU reviews. I've also included my Nvidia Founders Edition RTX 2080 Super results, too, just as a point of comparison. All three cards ran at their default, out of the box clock speeds, so they should be fairly representative of their respective card categories. As for the rest of my PC specs, I tested each card with my trusty Intel Core i5-8600K CPU and 16GB of Corsair Vengeance LED RAM, because these are the standard components in my RPS Test PC.

I should note that newer, more powerful CPUs will be able to get more out of the RTX 2080 Ti and RTX 3080 at 1080p and 1440p resolutions, but I found that each card's 4K results were pretty much identical regardless of whether I was testing them with my Core i5-8600K or Intel's newer Core i5-10600K (which is pretty much just as fast as the Core i7-9700K, let's not forget). This is because games are still GPU-bound at 4K, making your CPU less important overall. As a result, the key metric we're looking at here - each card's 4K performance - should be broadly what you can expect to see from any modern gaming PC.

Starting with our 4K Ultra results, you can see the RTX 3080 is already way ahead of the RTX 2080 Ti here, coming out in front in every game going. Some titles provide more of a boost than others, admittedly. Total War: Three Kingdoms is only a fraction smoother on the RTX 3080, as is Assassin's Creed Odyssey, and in both cases you're probably better off knocking the quality setting down a notch if you want a constant 60fps frame rate. 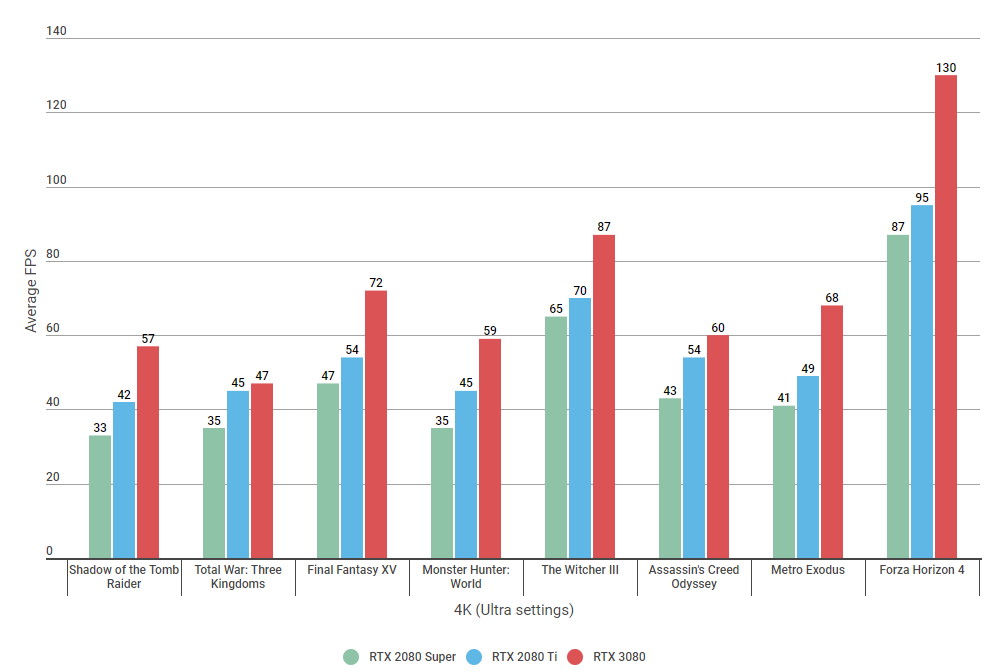 However, whereas the RTX 2080 Ti sometimes struggled to play all games at 60fps on max settings, the RTX 3080 really does bump almost everything up to near or over that hallowed 60fps mark (with the exception of Total War, of course). I was particularly impressed with how it handled Shadow Of The Tomb Raider's tough SMAA x4 anti-aliasing setting at this resolution, as this has traditionally crippled Nvidia's previous crop of RTX cards, as evidenced by the 30-40fps frame rates of both the RTX 2080 Super and the 2080 Ti. The RTX 3080, though, can handle it quite comfortably, almost scraping past that all-important 60fps average.

It's also much better equipped to deal with Final Fantasy XV's various extra Nvidia settings, too. The results above don't include any of these additional effects, but I was still able to get an average of 59fps with TurfEffects and HairWorks switched on with the RTX 3080 (with lows of 54), which dropped to just 50fps (with lows of 45) on the RTX 2080 Ti. Similarly, I didn't even need to contemplate using Metro Exodus and Monster Hunter: World's DLSS support to get a smooth frame rate with the RTX 3080, as its average frame rates were already lovely and smooth from the outset.

Let's move on to each card's 4K High benchmarks. I've removed Forza Horizon 4 and The Witcher 3 from this set of results as these were already perfectly playable on Ultra, but as you can see, the RTX 3080 still offers quite the boost over the RTX 2080 Ti here. 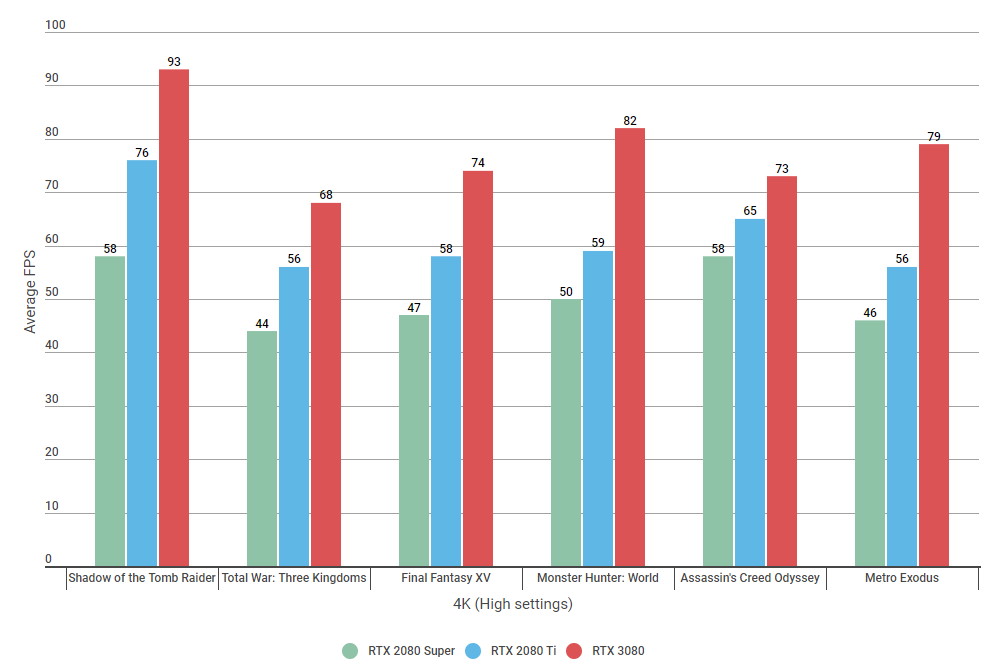 While the RTX 2080 Ti is perfectly capable of playing almost all of today's big games at near-60fps speeds on High settings at 4K, the RTX 3080 pushes performance firmly over that 60fps line and well into the 70s and 80s depending on the game. I've used the regular SMAA setting for Shadow Of The Tomb Raider here, just to show it is, in fact, playable at 4K on all three cards here, and how much faster the RTX 3080 is when it's not having to cope with ludicrously demanding anti-aliasing options.

Final Fantasy XV also doesn't include any of the extra Nvidia effects here, either, but needless to say, the RTX 3080's extra horsepower here puts it in much better stead for adding in option such as TurfEffects, HairWorks, ShadowLibs and its tough VXAO setting without dipping below that 60fps mark. The same goes for Metro Exodus's ray tracing support, too. Admittedly, both cards still need DLSS switched on to achieve steady frame rates at this resolution with ray tracing enabled, but while the RTX 2080 Ti's average of 53fps with Ultra-fied ray tracing on High is admirable, it's still got nothing on the RTX 3080's 67fps average using the same settings.

Of course, both the RTX 2080 Ti and RTX 3080 are more than capable of playing games on 4K Medium settings, but I'd thought I'd include benchmarks for the remaining games that didn't quite hit 60fps on High on the RTX 2080 Ti, just so we've got the full picture of how all three cards stack up here. 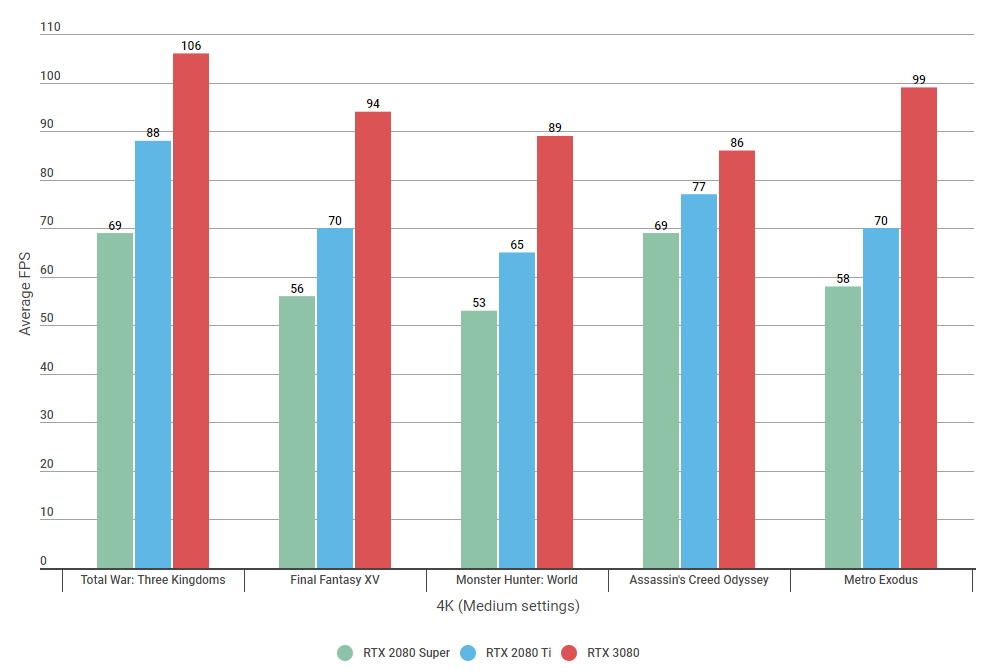 With the RTX 3080, you're absolutely flying on Medium, filling up those high refresh rate monitors like nobody's business as you push into the 90s and low 100s. The RTX 2080 Ti does a pretty decent job here with its 70-80-odd frame rates, but once again, the extra headroom you're getting for adding in things like ray tracing and DLSS pales in comparison to what you've got with the RTX 3080.

Speaking of high refresh rate monitors, the RTX 3080 also gives you a decent boost in this department when you're playing on 1440p Ultra settings, too. Again, there are some games here where the boost isn't quite as large as you'd expect, such as Assassin's Creed Odyssey and Total War: Three Kingdoms, but you're still getting a boost of at least 10fps in a lot of cases, if not closer to 20fps - which isn't too shabby, all things considered. 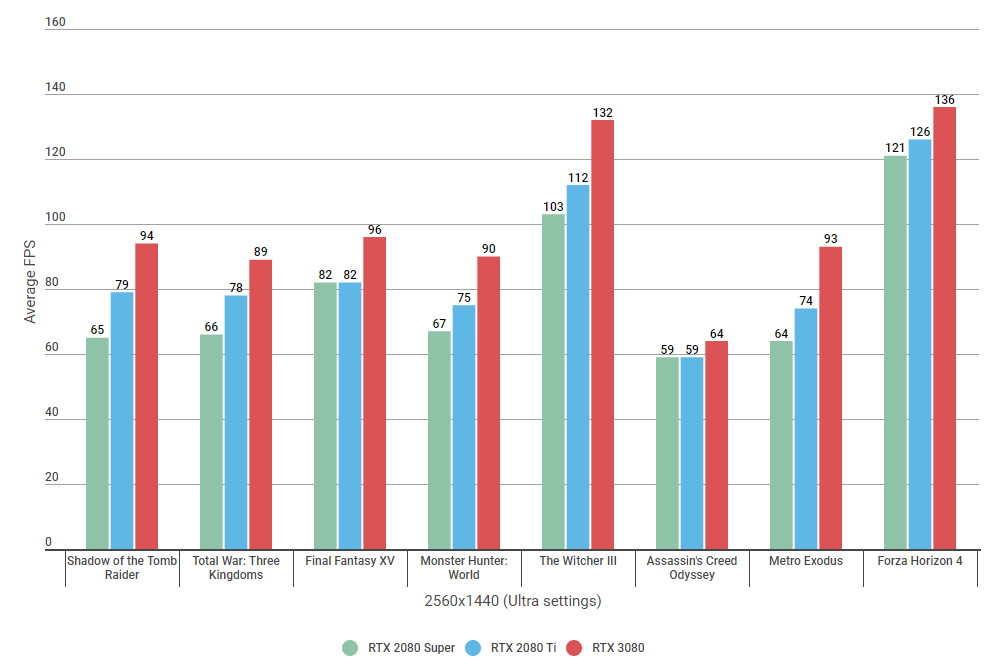 I should note, I haven't included any 1080p results here, because, let's be honest, no one should be buying any of these cards just to play games at 1080p. There are plenty of GPUs that can do that for a fraction of the price of these expensive cards, such as the excellent AMD Radeon RX 5600 XT, and you shouldn’t be spending upwards of £650 / $700 on a 1080p graphics card.

At least it does right now, anyway. We still don't know what AMD have up their sleeve with their upcoming Big Navi launch, for example, or how much they will cost by comparison, and we're still awaiting the launch of Nvidia's RTX 3070, too, which also promises RTX 2080 Ti-level speeds for even less than the RTX 3080. The RTX 3080 certainly sets a high bar for the next crop of 4K graphics cards - and will no doubt be a solid choice for anyone looking to play games on max settings at 4K at 60fps - but with so many "next-gen" graphics cards still to come at time of writing, I'd strongly advise holding fire on any potential upgrades until we've seen everything that Nvidia and AMD have to offer.