You may not be able to buy it anywhere right now, but Nvidia's new RTX 3080 GPU has very much set the bar for next-gen graphics cards. It represents a significant leap over the existing RTX 2080 and RTX 2080 Super, both at 4K and lower resolutions, and it's hands down one of the best graphics cards Nvidia's ever made. But just how much faster is the RTX 3080 over the RTX 2080 and RTX 2080 Super? Let's find out via the medium of some lovely graphs.

To test the RTX 3080 and its 2080 siblings, I paired them with my Intel Core i5-8600K CPU and 16GB of Corsair Vengeance LED RAM and put them head to head in my general games benchmarking suite, taking an average frame rate from either their own built-in benchmark tools or from my own repeated manual gameplay tests. The games includes Shadow of the Tomb Raider, Total War: Three Kingdoms, Final Fantasy XV, Monster Hunter: World, The Witcher III, Assassin’s Creed Odyssey, Metro Exodus and Forza Horizon 4.

For this particular test, I've used the Nvidia Founders Editions of each RTX 2080 card, and Asus' TUF Gaming GeForce RTX 3080 OC Edition, as these were the cards used in my individual GPU reviews. All three cards ran at their default, out of the box clock speeds, so they should be fairly representative of their respective card categories.

I've also only included my 4K and 2560x1440 results here because, let's face it, no one should be buying any of these cards for playing games at 1920x1080. There are plenty of GPUs that can do that for a fraction of the price of these high-end behemoths, such as the excellent AMD Radeon RX 5600 XT, and you shouldn't be spending upwards of £650 / $700 on a 1080p graphics card. With all that in mind, then, let's get down to those tasty bar charts.

Starting at the 4K Ultra end of the spectrum, you can see below that the RTX 3080 is way out in front of its two RTX 2080 siblings here, able to hit 60fps+ (or damn near close to it) in almost every game going with the exception of Total War: Three Kingdoms. Previously, you needed an RTX 2080 Ti to get this kind of speed on max settings at 4K, and even then there were still quite a few games that gave the Ti trouble on this quality setting. 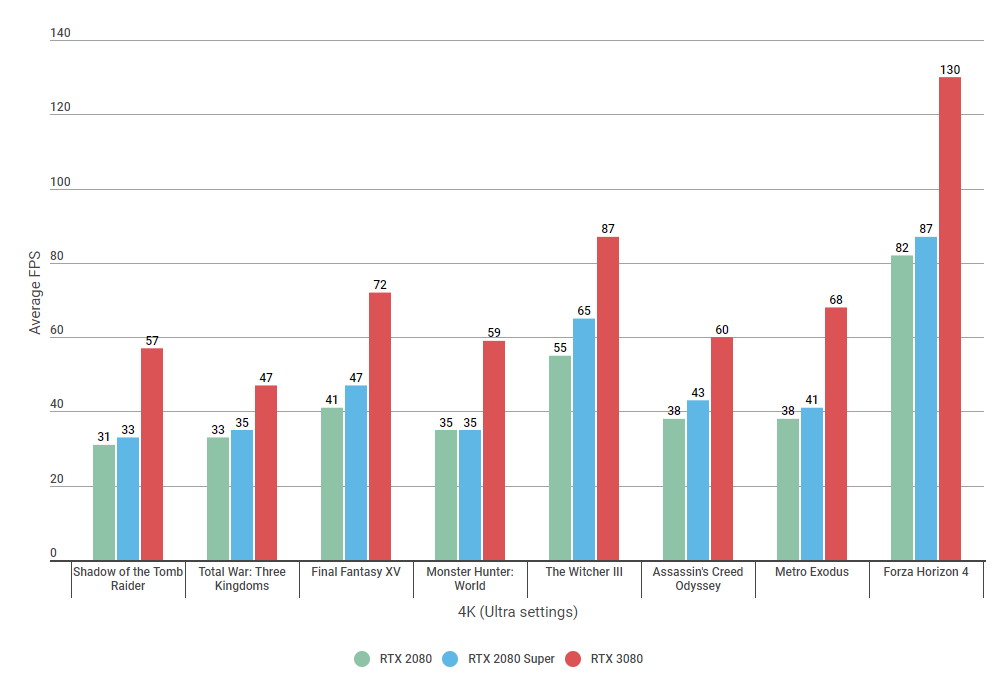 The RTX 3080, on the other hand, is almost twice as fast as the vanilla RTX 2080 in some cases, producing much smoother frame rates all round. I was particularly impressed by how it handled Shadow Of The Tomb Raider's tough SMAA x4 anti-aliasing setting. Whereas the RTX 2080 and RTX 2080 Super are barely playable with this enabled, the RTX 3080 breezed through it with near-60fps performance.

I lowered this down to its regular SMAA for my 4K High results, just to prove Shadow Of The Tomb Raider is, in fact, playable on the RTX 2080 and RTX 2080 Super, but as you can see below, the RTX 3080 is still way out in front here, almost doubling that average frame rate again. It was a similar picture elsewhere, too, with the RTX 3080 offering almost twice as much performance generation on generation. 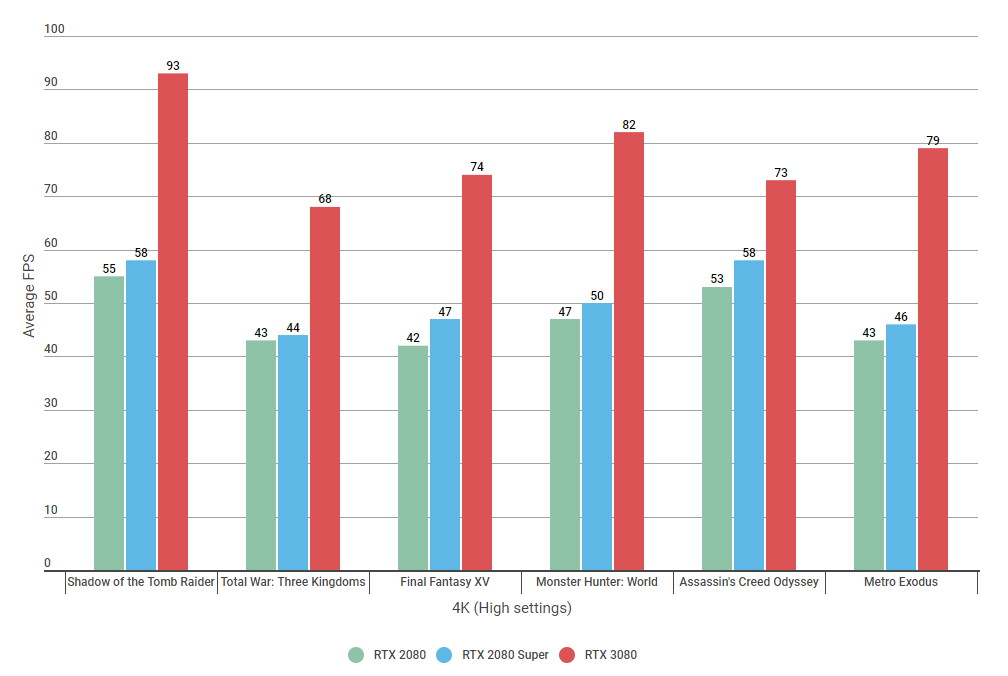 Indeed, the RTX 2080 and RTX 2080 Super still struggle to hit 60fps on High in a lot of games at 4K, and are really only fit for playing older titles, such as The Witcher III on these high-end settings, or well-optimised games such as Forza Horizon 4 (which I've removed from the table since they've already hit the all-important 60fps mark). 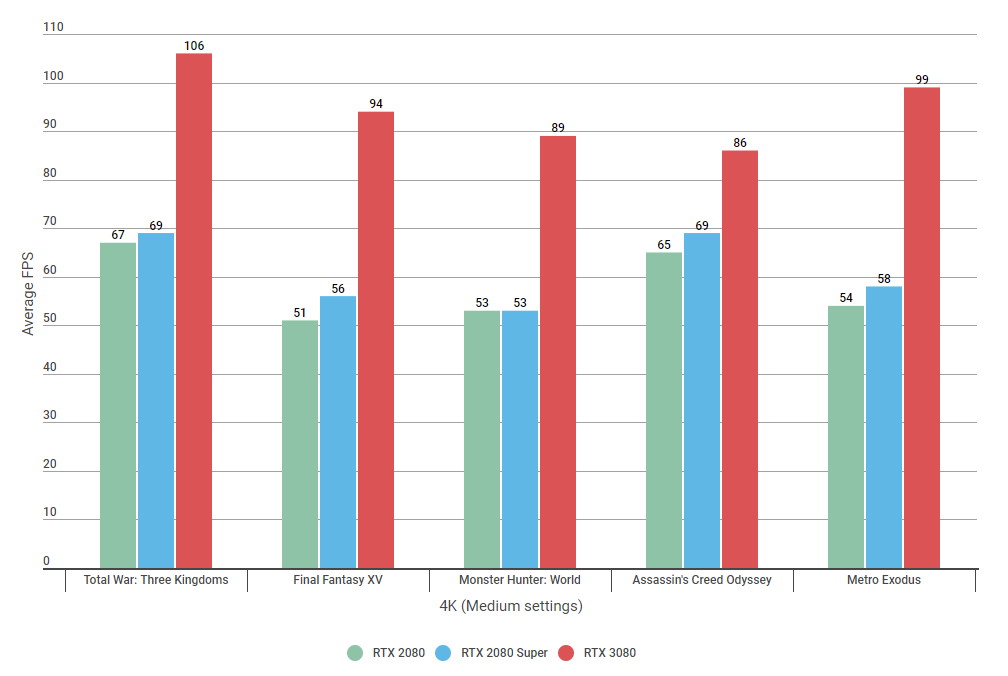 As for playing games at 2560x1440, all three cards can manage 60fps frame rates quite easily on Ultra settings, although again, you'll be able to get a lot more use out of a 1440p monitor with a high refresh rate with the RTX 3080. Whereas the RTX 2080 and RTX 2080 Super are only just about over the 60fps mark at this kind of quality setting, the RTX 3080 is way out in front, often achieving frame rates of 90fps or above. 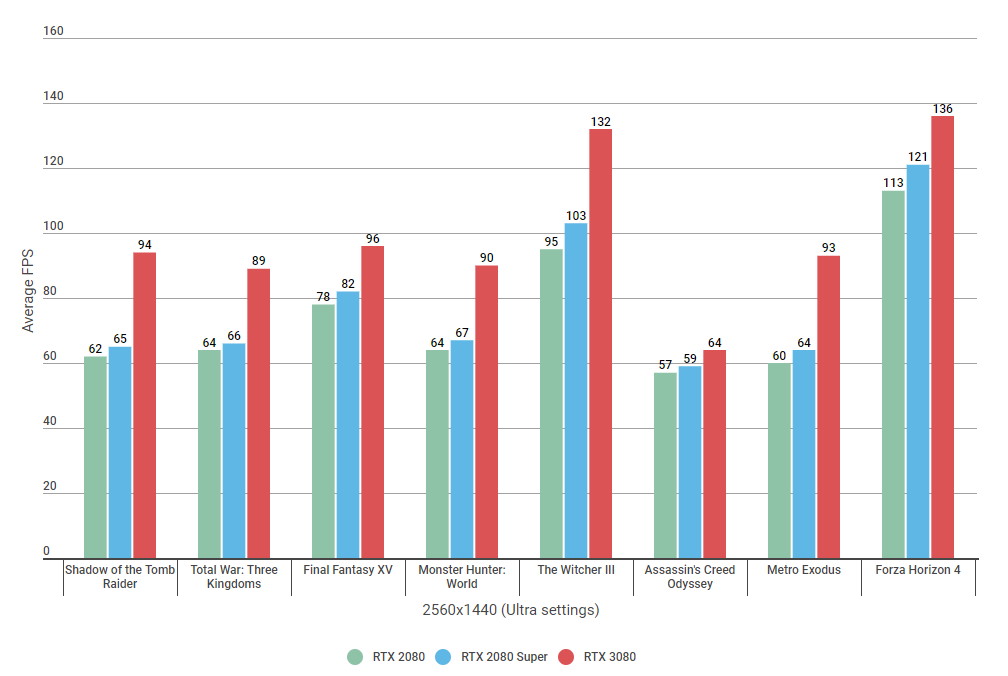 The only game where I found myself getting bottlenecked by my CPU at this resolution was in Assassin's Creed Odyssey. The rest are still GPU-bound. Indeed, when I re-tested the RTX 3080 again with Intel's more up to date Core i5-10600K at this resolution, Assassin's Creed Odyssey shot up by another 20fps. The RTX 2080 and RTX 2080 Super got a boost, too, but only by a handful of frames - more 4-5fps as opposed to 20fps.

So yes, the RTX 3080 and its new Ampere GPU architecture represent quite the leap over the RTX 2080 and RTX 2080 Super, all for the same kind of price to boot. Sure, the current stock situation with the RTX 3080 has pushed prices way beyond its official starting price of £649 / $699, but it's definitely much better value compared to the RTX 2080 Super, which launched at exactly the same price in July 2019.

If you're wondering why there's such a big jump between the RTX 2080 / 2080 Super and RTX 3080, a large part of that is down to its new manufacturing process. Whereas the RTX 20 series were based on a 14nm manufacturing process, Nvidia have jumped down to just 8nm for their RTX 30 series, allowing them to pack in a lot more transistors and whatnot in the same die size for increased power and performance. For example, whereas the RTX 2080 and 2080 Super had 13.6 billion transistors in their 545mm squared GPU die, the RTX 3080's 628mm squared die has 28.3 billion of them.

Nvidia have also increased the TDP (or thermal design power) of the RTX 3080 to 320W this time, compared to the RTX 2080's 215W TDP and RTX 2080 Super's 250W TDP. This means it can draw a lot more power (and dissipate more heat) than its RTX 20 siblings, allowing it to go further for longer under load. As a result, it's not really that surprising that the RTX 3080 offers such a giant leap over its RTX 2080 predecessors, but it does ask more of your PC as a result - namely, that have you have at least a 750W power supply to get the most out of it, rather than a 650W one required by the two RTX 2080s.

Still, the RTX 3080 certainly sets a high bar for the next generation of 4K graphics cards, and it will be interesting to see whether AMD's Big Navi GPUs can match it come the end of October.