How long has it been since I first saw gifs of Ooblets—those goofy critters trundling around town behind their awkwardly dancing human friend? RPS first posted about this cute little town sim three years ago. So probably about then, I'd say. I thought it might arrive in 2018. I had hope for 2019 too. According to Glumberland's development update for January, "2020 is the YEAR OF THE OOB." So this will be the year I jog around town with my little dancing monsters? I hope so.

More specifically, Glumberland say that the 2020 year of Oob has been "foretold in the prophecies/milestone calendar." That does actually sound like a promising, grounded estimate. They've been hesitant to suggest any firm dates and yeah, this is not a firm date, but it's a year and that's more than I had before. Glumberland invites you to draw whatever wild conclusions you will from this proclamation. I'll avoid anything too wild and instead tell you what they say they've been working on.

Originally, Ooblets was planned with battles between its little monsters in a system reminiscent of Pokemon. Back in 2018, Glumberland axed that system for a friendlier dance battle concept. According to the team, they've implemented 73 new moves with "50 or so" left to do before launch. That's a lot of fresh footwork. 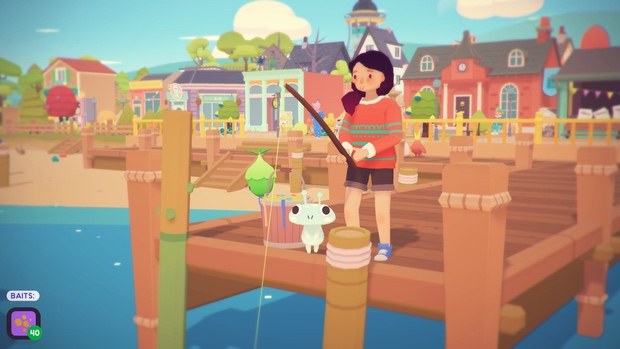 The biggest new addition, Glumberland say, is "sea-dangling." I honestly thought maybe this is an activity I just don't know about. So far as I can tell, that's just the dorky Ooblets-ed name for fishing. "The concept ended up working out really well in Ooblets since as you all know sea-dangling doesn’t involve hurting any animals," Glumberland say. It looks like sea-dangling mostly involves catching junk, not fish, though they do reference using bait and I'm not sure how inanimate stick bundles can be baited.

There's a bit more: new animations, new lore floating around the world that you can read, and an Oob that delivers your unlocked badges to you. You can catch the rest of the details in the Ooblets January devlog. You'll find Ooblets over on the Epic Store whenever it decides to grace us with its dance-offs.