So you've bought Minecraft Dungeons but you don't have the foggiest idea of how to play it. If you're coming to this game from regular Minecraft, it's got a familiar setting and characters, but that's where the similarities end.

Don't worry, if you're stuck learning how to play Minecraft Dungeons we can teach you the basics.

Our guide on how to play Minecraft Dungeons will go through the basics. This includes learning the controls and user interface (UI), how to use the inventory screen, and how to use the camp to get better items.

The Hero Edition of Minecraft Dungeons includes the main game, as well as the following items:

We do not know what the DLC packs will contain yet. Head to our Minecraft Dungeons DLC guide to keep up to date with all the DLC packs coming to the game.

If you have the Xbox Ultimate Game Pass, you can install the Hero Edition of Minecraft Dungeons right now, however the game won't be available until May 26th, 2020 at 10:00 BST.

We do have some idea of what the full minimum and recommended specs could be in the table below, though it doesn't take into account the Windows 7 and Windows 8 versions. 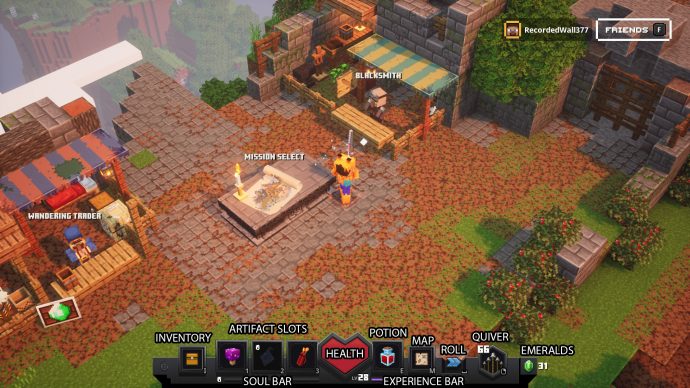 The UI toolbar at the bottom of the screen has key information about your current health, items equipped to your item slots, and button shortcuts.

At the centre of this toolbar is a giant heart. This represents your life, with segments of the heart being shaved off as you are hit by enemy attacks or walk into hazards.

You can use healing potions to refill your health entirely by pressing the E key or the LB button on your controller. There is a 40 second cooldown after you drink potions.

Enemies can also drop certain items when killed. Some of these are healing items and when they are picked up, they can automatically regenerate your health for a short time.

At the bottom and to the right of the UI toolbar is the experience bar. This displays your hero's current level and the purple bar shows the total experience you've accumulated towards the next level.

At the bottom and to the left of the UI toolbar is the soul bar. Souls are a resource that is accumulated when you kill enemies with a Soul weapon or artefact equipped. You can use souls by using abilities tied to certain artefacts. They generally don't have a cooldown period, but once your soul bar has run dry, you can't use those abilities until you partially refill the soul bar.

To the right of your Soul bar are the number of lives remaining. You start out with three per level.

When you die in a level, you will need to wait a few seconds before automatically respawning close by. Run out of lives and you'll fail the objective for that level.

The three boxes to the left of your heart are for equipping items, which are equipped via the inventory menu. To use an artifact once equipped, press the designated number key (1, 2, or 3) or controller button (X, Y, or B) for its slot. We'll have a lot more information about what artefacts are available in our Minecraft Dungeons artifacts guide.

You also have a forward roll. This can be used to dodge enemy attacks and clear gaps to find secret items. It's worth noting that rolling has a 2.5 second cooldown, and that you will move more slowly until that cooldown wears off.

If you are playing multiplayer, you'll also get an Ender Pearl. This is a reusable item that allows the user to reunite with another player. Push the right stick in on a controller, or press the F1 key to bring up the list of available players. Press the button associated with that player to teleport.

It will take a little bit of time, but it's worth it to watch your hero wind their arm up like Marvel's Thor winds up Mjolnir.

The hexagon to the right of the forward roll button is your quiver. It shows the number of remaining arrows. You can occasionally get arrow bundles by defeating enemies, which replenish your supply of arrows depending on what bow type you have equipped.

The quiver can also display special ammunition that is generated by equipped artefacts found in levels.

Finally, to the right of this is a small green gem with a number beside it. This is the total number of emeralds - the game's currency - that you currently have. You can carry an infinite amount of emeralds.

You can occasionally get emeralds by defeating enemies. Walk close to the green gems that appear until they float towards you. They're also frequently found in hidden chests and obtained via salvaging items.

Here are the default controls for Minecraft Dungeons if you are using a keyboard and mouse to play. If you have played Diablo, Path of Exile, or Torchlight before, the majority of these controls should be familiar to you. 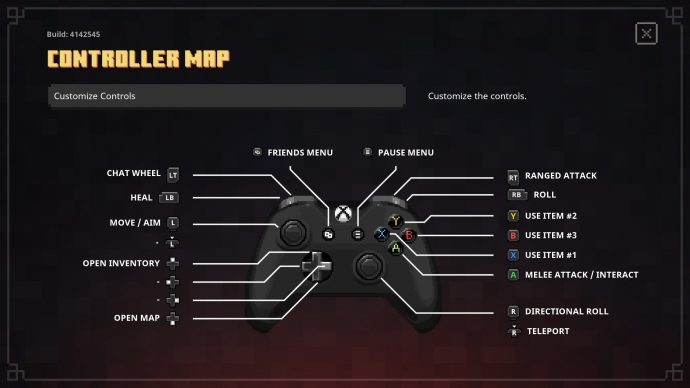 For those who prefer to use a control pad to play games, Minecraft Dungeons features full controller support. The Xbox branded controllers are compatible right out of the gate, so just plug it in via USB and you're good to go.

I have so far been unable to configure a PlayStation 4 controller or Nintendo Switch Pro controller as they are not supported by default. It also seems that if you are trying to use a Steam controller, this will also not work natively (Many thanks to "simmuskhan" for that info). We suspect that using the Global Steam Controller app might be a good workaround, though we have not been able to test it with Minecraft Dungeons specifically.

Here are the default controls for the Xbox controller:

Managing your inventory in Minecraft Dungeons

The inventory screen in Minecraft Dungeons is where you can change your equipped gear. You can equip one melee weapon, one armor piece, one ranged weapon, and up to three artefacts equipped at any given time. Unlike similar games, Minecraft Dungeons doesn't have an inventory limit, so you can hoard as many items as you wish. We don't recommend doing this though, for reasons we'll go into later.

To equip an item, you'll need open the inventory (either by pressing the I button on your keyboard, or up on the D-Pad for controllers). Once there, you'll need to either drag and drop the item with the mouse onto the correct item slot (the bit to the left of your inventory - compatible slots will be highlighted) or simply press A twice while highlighting the item if you're using the controller. 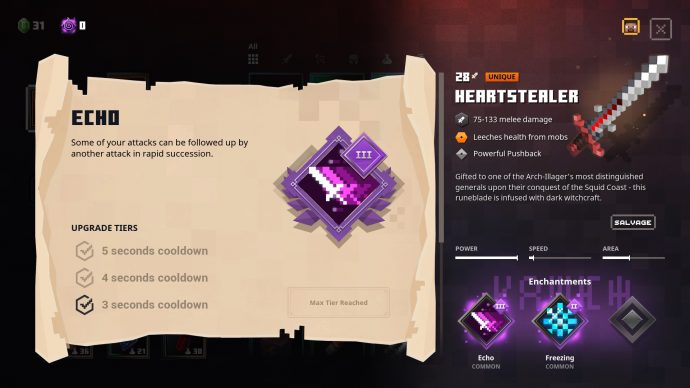 How to use enchantment points in Minecraft Dungeons

Every time you level up, you will get an enchantment point. These are used to upgrade items.

To spend an enchantment point, press the left mouse button or X button on the gear you wish to upgrade. This will give you the choice between randomised enchantments. Select one of them to apply that enchantment to the selected gear.

Once you've bought an enchantment, you'll lock that choice in. From that point on, you'll only be able to upgrade it to tier 2 and tier 3. The other choices for enchantments are unable to be selected. As for how many enchantment points this will cost you, it depends on the enchantment's rarity, a breakdown of which is below:

It's also worth noting that some weapons and armor may have two or three options to choose between for each enchantment slot. Each one costs an enchantment point to choose it and these choices may give you an opportunity to nab some enchantments that have great synergy.

The camp is your hero's home base where you can stock up on some new gear and open some lobby chests. This is also where you gather together with friends, which you can find out all about in our Minecraft Dungeons multiplayer guide. Here's what is in the camp:

Earlier in the guide, we alluded to the need to avoid hoarding items. The reason you don't want to do this is because if you salvage your gear, the Blacksmith and Wandering Trader can give you versions of items that are more suited to your current progress in the game. This includes the highly sought after unique items, which you can learn about in our Minecraft Dungeons unique items guide. To do that you'll need emeralds, and what better way to get emeralds quickly than salvaging the redundant items in your inventory.

Thanks for reading our how to play Minecraft Dungeons guide. You'll find plenty more guides for the game in the section below, so do check them out.