You will need to find nine hidden runes to unlock this hidden level, and once you do you'll get access to the craziest secret area in the game.

This Minecraft Dungeons runes guide will list the steps you need to take to find all nine runes in each of Minecraft Dungeon's story missions that are required to unlock the secret cow level.

To access the fort in the camp where the secret level map is located, you must have completed Minecraft Dungeons at least once. The runes hidden in story missions are only used to open the door at the back of the fort and can be found on any difficulty level.

I recommend playing each story mission on the lowest difficulty tier available for that mission on Default difficulty. After finding the rune doorway for each mission, head through the doorway and along the path to find another button. Push it to make the rune appear, then click on the rune itself to pick it up.

Once you've got the rune, there is no commitment to complete the level, so bring up the menu (Esc key or Start button) and select the option to "Return to Camp". You can then move onto the next level. Just make sure that you did pick up the rune up first, otherwise you'll have to go and find the hidden door again. Below are all nine rune locations: 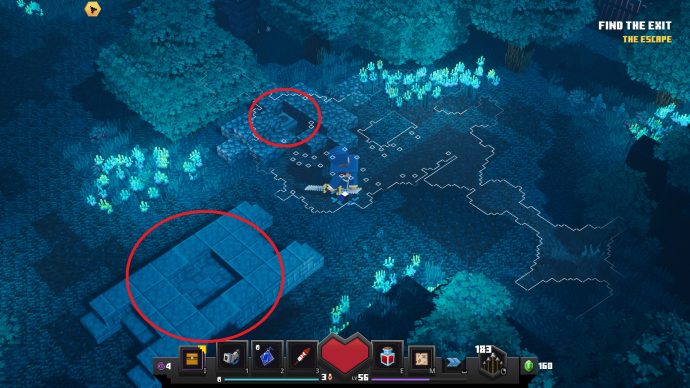 Make your way through the level until you have to rescue multiple villagers. Head to the south-west of this large area to find a stone formation. Inside the cobblestone mound just up from it is a button. Press the button to unlock the doorway to the rune. 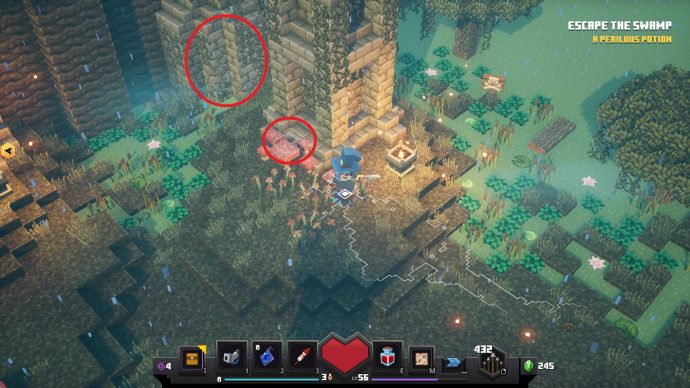 After destroying the Cauldron at the end of the level, head towards the exit. There is a stone column to the right with a button hidden within the mushrooms at its base. Push it to open the entrance to the rune in the stone wall behind it. 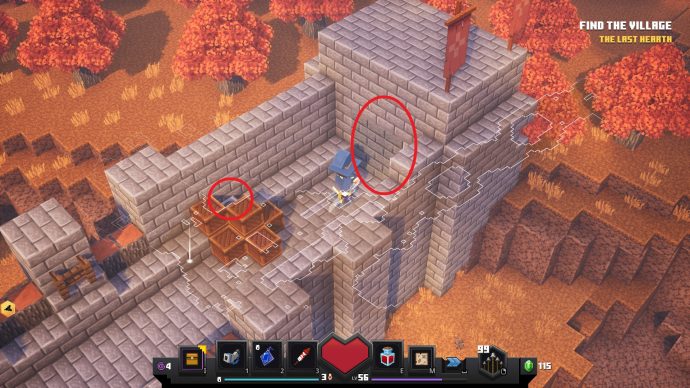 Find the long wall about halfway through the level and walk across the top of it to see some discarded wooden boxes. The button is hidden behind them and pushing it will unlock the door at the end of the walkway. 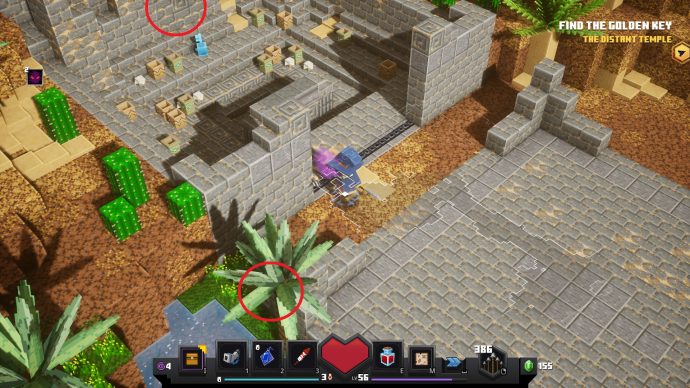 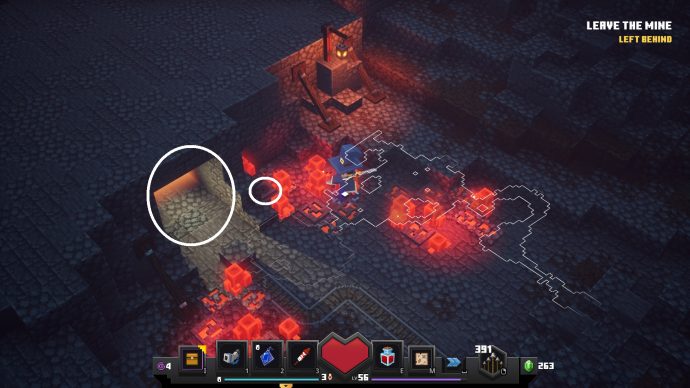 As you're rescuing the villagers for the second time, look towards the top of the area. There's a button that's very well hidden, obscured by a redstone deposit and the corner of the wall. Click it to open the door to the rune. 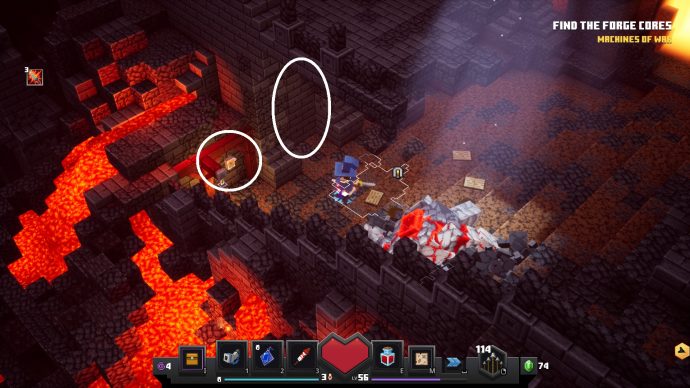 Upon entering the second area of the level, you'll see the remains of a Redstone Golem. Head as far to the left as possible and activate the switch on the back wall to reveal a doorway. 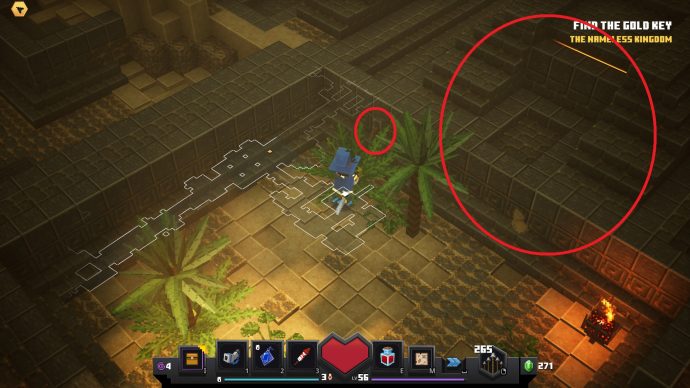 When rescuing the gold key, look behind the palm tree in a nearby room. There's a switch obscured by its leaves. Pull it to open the door to the rune. 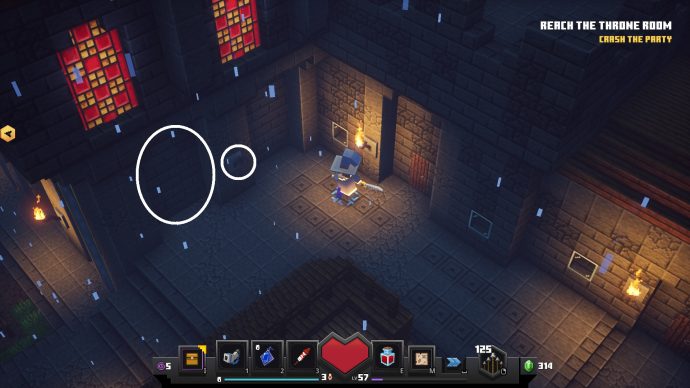 After the first wave of enemies summoned by the Arch-Illager, you'll come across a marketplace outside. You'll know you're in the right area if it is raining. Head to the right as you enter and hug the wall around the upper part of this area. You'll eventually come across a switch. Twist it to make the door appear that leads to the rune. 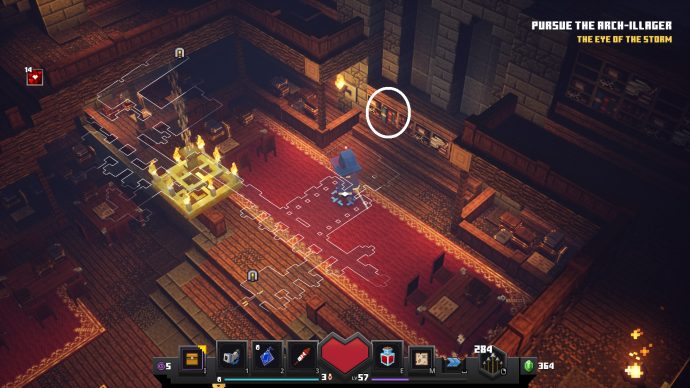 About halfway through the level, you'll come across an interior area. Don't leave this area after you've cleared it. Instead, head to the library and look at the shelf towards the back of the room. There will be a book you can pull to reveal an arch. Inside is the rune, as well as a couple of chests with loot inside. 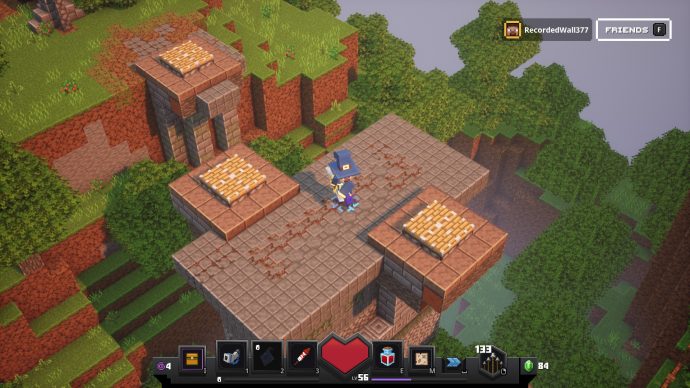 How to unlock the secret cow level in Minecraft Dungeons

The secret cow level is very well hidden. If you don't know what you're looking for, you'll likely miss out on unlocking this secret level entirely. The first step is to find the hidden fort in the camp. You may have noticed a drawbridge that is raised towards the south-east of the main camp area. You'll need to find an alternative route to get to the other side to lower the drawbridge.

You will need to complete the campaign on default difficulty to unlock the path to the secret cow level. Once you have completed the campaign, walk south-east from where you appear in the camp. Walk past the house and keep going. You should see some springs, so use them to get across to the other side.

The path from this point eventually leads to an incomplete Nether portal (it's missing a block of obsidian) but pay attention to the trees to the south-west. Behind the leaves, there is a small path that's very easy to miss. We've put an arrow in the image above to show where this path is. Head down the path and you'll come across a drawbridge. Activate the switch to unlock a shortcut back to the camp. From here, head inside the fort.

This fort is where you can keep track of all the unlocked runes. If this is the first time you have visited the fort, the button at the back will highlight the triangle rune. As you collect runes, more letters will be highlighted on the back wall when the button is pushed. There's also an image of a dog on the back wall that, when clicked, can show some clues to where you can find the runes. Once you have all nine runes, come back here and press the button.

After pushing the button at the back of the fort hall, as long as you have all nine runes, the door will open. Inside is a map for the level, and two chests. The map unlocks the level "???".

Here, you'll find a huge number of Mooshrooms. They are hostile and move slowly towards you. There are a bunch of diversions leading to chests, and of course more Mooshrooms! These Mooshrooms are very good to grind for experience if you have the right build, so do check out our Minecraft Dungeons best builds guide for some of the best builds.

The level ends with an encounter against the "Mooshroom Monstrocity". It's largely the same as the boss of the Fiery Forge, only instead of lava and fire the golem uses Mooshrooms. This boss is rather easy to defeat if you can slow it down with a Wind Horn, although it can take a long time. You will need to manage the constantly appearing Mooshrooms while avoiding the Monstrocity's slams and mushroom bolts. Thankfully there are raised ledges you can use for cover.

Thanks for reading our Minecraft Dungeons runes guide. You'll find plenty more guides for the game in the section below, so do check them out.