Minecraft Dungeons has the hero face off against the Arch-Illager and his minions. Leading them are some unique bosses, from a Corrupted Cauldron in the Soggy Swamp to the Redstone Monstrocity in Fiery Forge. The Arch-Illager is also quite a tough boss, mostly because of his spooky second form. While having the right gear can help keep you alive, having a strategy for each fight can make all the difference. 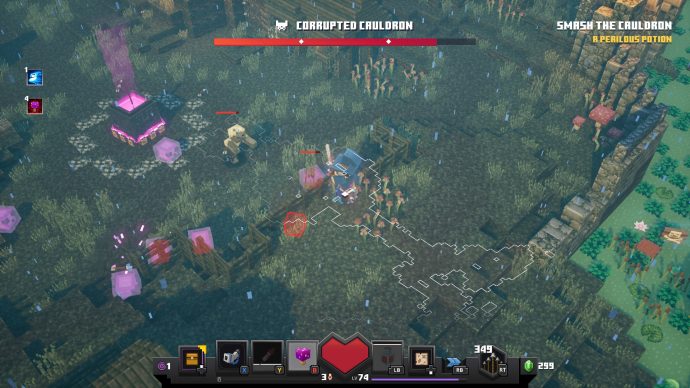 Found in the Soggy Swamp, this boss stays in the centre of the arena and has two main attacks:

If you are trying to defeat this boss with gear of a similar power level, my suggestion is to use a hit-and-run strategy. The cliff as you enter the arena is a safe space to hang back while you wait to use your artefacts and health potions. The cauldron can't get slimes close enough for them to hit you with fireballs. When you've recovered, rush in and deal as much damage to the cauldron as possible, before returning to the safety of the cliff. Repeat this strategy until its health bar is gone to win. 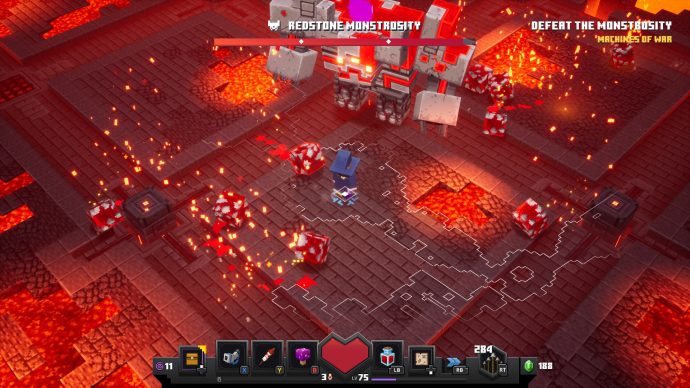 The main issue with fighting the Redstone Monstrocity is the arena in the Fiery Forge you fight it in. There's random lava pits everywhere that you need to take care not to step in. This is easier said than done as the boss constantly summons red rolling slimes and hurls a hail of fireballs at you.

While the Redstone Monstrocity seems to be immune to the fire towers you can activate, the slimes are not. If you are ever find the slimes a little too hard to deal with, you can use these to get rid of them.

The boss is otherwise a very slow, albeit incredibly durable. If you have enough arrows and attacking artefacts equipped, you can hit it safely with ranged attacks. Getting up close to hit with melee attacks can be somewhat painful if you're hit by its fists slamming into the ground.

This is similar to the boss of the ultra secret level in design, but the actual fight is very different. Head to our Minecraft Dungeons runes guide for the strategy to beat that version of the boss. 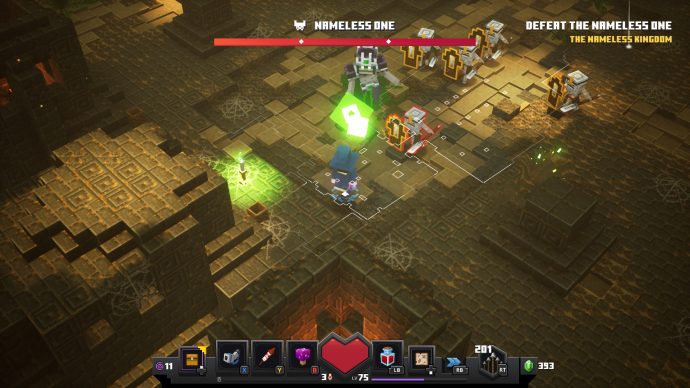 This necromancer is the main boss of the Desert Temple and can take a while to take down if you're at a similar power level. As for his attacks, he'll do the following:

Getting close to batter him with melee damage is going to be the difficult bit. Kill the skeletons and he'll stand still to summon a new group of skeletons. This is your best chance to hit him with melee attacks. Keep hitting him with either melee or ranged attacks and you should win this fight. 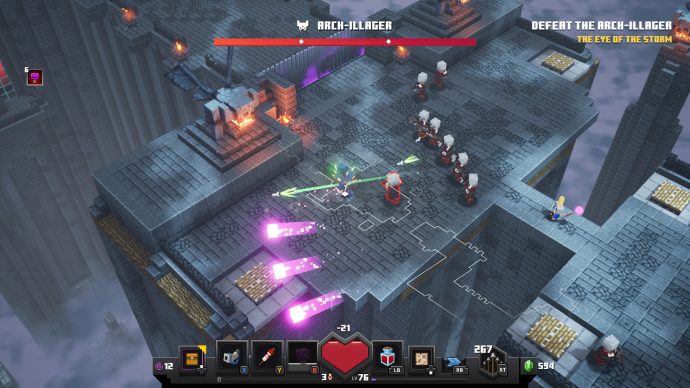 This is the first phase of two bosses found at the end of Obsidian Pinnacle. Before even attempting the level, make sure you have an artefact equipped that can give you ranged attack ammunition, such as the Firework Arrow.

The arena you fight on is covered in springs, so use those to avoid the attacks from the line of Illager crossbowmen that the Arch-Illager summons. Take these out as soon as you can as their arrows can hurt a lot. The Arch-Illager can also summon melee attacking Illagers in a circle, but these aren't as dangerous.

The Arch-Illager doesn't have a lot of health, but he does have a powerful magic spreadshot attack. He also has a very nasty habit of warping around the arena, making him very hard to hit with melee weapons.

That said, try to hit him as much as possible with melee weapons. You'll want to save the ammunition to deal with the next form, who is significantly harder to hit with melee attacks. When the Arch-Illager's health drops to zero, he'll begin transforming into his next form. 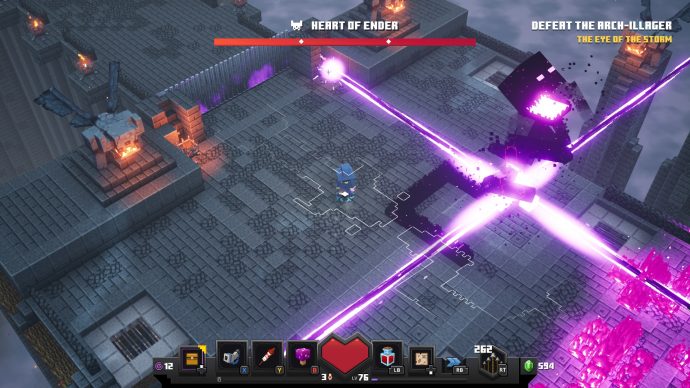 I'd say this is probably the hardest boss in the game to deal with. The Heart of Ender has three attacks, all of which can obliterate your health in a matter of seconds if you're not careful. It always does its attacks in the same order though, so here's the sequence:

If you ever run out of ammo, don't be tempted to use melee attacks if you can help it. The black flames surrounding the core of the boss deal the same amount of damage as the lasers it can fire. Instead, keep your distance and fire arrows or use attacking artefacts like Firework Arrows until you finally defeat it.

The other half of this boss guide will discuss the mini bosses. They can appear multiple times in a level and, aside from a few specific cases, are not tied to any one mission.

This means that while the interior section in Obsidian Pinnacle may have an Evoker in one playthrough of the mission, it could have a Redstone Golem instead in a subsequent playthrough.

Here are all of the mini bosses and the strategies to defeat them:

While this is the main boss of the level Pumpkin Pastures, the Evoker is also one of the more common mini bosses found elsewhere in the game.

This Illager can summon small sprites and bear traps. The sprites are a bit of a distraction, so make sure you keep an eye on whether the Evoker is sending the traps in a straight line or in a circle around it. Other than that though, this one is pretty easy if you stick up close and hit it with melee attacks.

It'll more often than not appear behind you so stand still and be ready to dodge its melee attack. It generally attacks once before disappearing, so avoid its punches and counter with melee or ranged attacks of your own.

These bony lads only started appearing for me when I played on Adventurer Difficulty or above. Four skeletons on horseback can appear from out of nowhere to fire arrows at you.

None of them have a huge amount of health and you should be able to focus on one rider at a time. They are fast, so use ranged attacks when you can. They're otherwise not that difficult to beat.

The Redstone Golem is always found at the end of Redstone Mines, but can be found in other levels. These golems are incredibly durable and have two main attacks. The first is a punch that they can throw when you're too close to it.

The second attack is more difficult to avoid though. It will slam its fists into the ground and summon traps onto the ground. Walking over these hurts a lot.

If you're using ranged attacks, keep running away from it and firing your shots as you get far enough away. Melee attackers will have to wait until it plunges its fists into the ground before rushing in to attack for a couple of seconds. My only other tip is to lead this mini boss to areas where you can run around in circles.

Thanks for reading our Minecraft Dungeons boss guide. You'll find plenty more guides for the game in the section below, so do check them out.