One of the vital concepts to get to grips with in Minecraft Dungeons is how enchantments work. Each piece of gear, whether it is a melee weapon, ranged weapon, or the armor your hero wears has at least one enchantment slot.

The important thing about enchantments is that your hero is not locked to a choice that you have made. As there is no penalty for changing your hero's gear, you have the freedom to mix and match enchantment compositions to create lethal combos.

We have updated this guide to show Powerful enchantments, and the enchantment point costs to required to upgrade them.

The enchantments listed below can appear as enchantment choices for your gear. You have a choice between two or three enchantments per enchantment slot. These do have their own rarities, each tier of which has its own enchantment point cost. Here is a breakdown:

Keep in mind that while most of the enchantments have a fixed effect, there are a select few that have numbers increase as per the melee weapon's power level. You can tell which ones can change because they're ones that deal set damage. 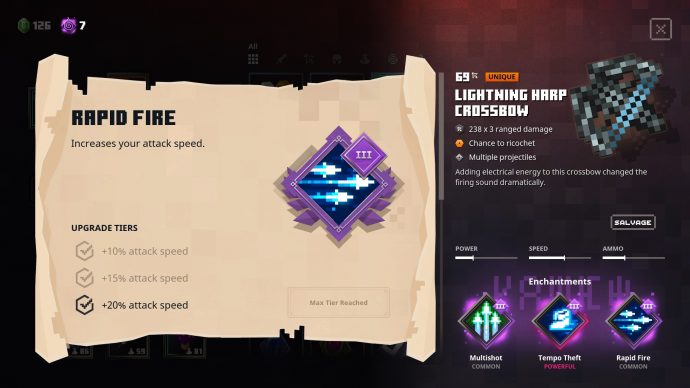 Each enchantment will give your hero a perk, the range of enchantments that you can find are split by gear types: melee, ranged, or armor. Abilities from enchantments do all sorts of things, so do check out the tables above for the full list. These enchantments can be used in tandem with artefacts, so have a look at our Minecraft Dungeons artifacts guide to see which ones you can combine them with.

How do I upgrade enchantments?

Whenever you level up, you will get an enchantment point to spend on upgrading your gear. For each enchantment slot, you are given a choice of one enchantment to spend points on, out of a possible three enchantment choices. Doing so will give your hero a unique perk that stays with them until you change the gear you have equipped.

How to get back enchantment points

Thanks for reading our Minecraft Dungeons enchantments guide. You'll find plenty more guides for the game in the section below, so do check them out.