Ori And The Will Of The Wisps has a fair number of boss fights, but this one is that shade creepier than most. This giant spider is Mora and she does all the things giant spiders like to do, but it also likes to make things very dark. She is utterly terrifying to fight if you're not prepared, so this guide will go through all the steps needed to beat Mora.

Ori And The Will Of The Wisps Mora guide

Before you even start this boss fight, there are a couple of shards and skills that I highly recommend you equip. These are Sticky ability unlocked early on in the game for use in the chase sequence, and the Light skill found in the local area for the final part of the fight. Find out where to get them in our Ori And The Will Of The Wisps Spirit Shard locations guide.

This first phase has a mixture of melee attacks and projectiles that are surprisingly hard to avoid. Thankfully there is an energy crystal that regenerates after a certain amount of time.

When you've taken about a quarter of her health away, Mora will stumble and break a wall. She gets some new attacks here (though there is no checkpoint at this stage) that can be avoided by either launching off the lantern or hanging off the cocoon.

As long as you're managing the smaller spiders, avoiding the acid pools, and bashing her head with attacks, you should get her down to half health. The good news is the game auto-saves at this point. The bad news is you now need to run. 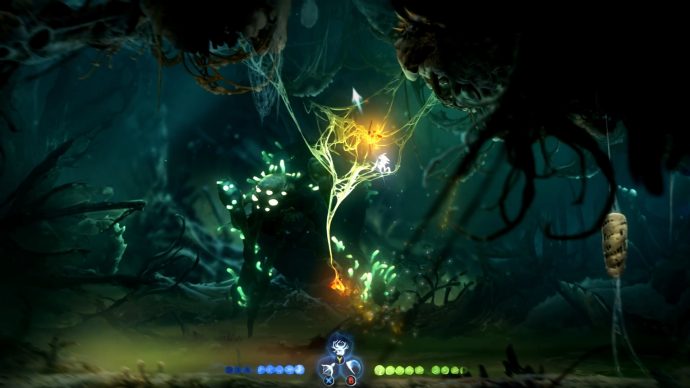 How to complete the chase phase

At around half health, Mora will stumble into the background and yell, prompting two orange lanterns to drop to within your reach. This phase is the reason why we have the Sticky ability equipped, because there's a climb up a log that's a little tricky if you don't have Sticky equipped. Here are the steps you need to take to escape Mora's mandibles.

After the chance sequence, you'll get a second auto-save so you don't need to run away again. The bad news is that this will be the last auto-save, but the good news is that Mora's attacks are largely the same as the ones from the previous phase.

As for her attacks in this phase, she does thankfully lose the acid jet stream, but she gets two very powerful ones. There are two orange lanterns here, making avoiding some attacks harder to avoid than before.

At around a quarter of her health, Mora will scream once more, causing intense darkness. Use the light skill to avoid being instantly killed. You'll need to top up your energy to keep this skill active, so break the energy crystal that restores itself after around 20 seconds of being destroyed. Don't use any skills other than this if you're at low energy, because once you run out, you'll likely die not long afterwards. She gains no additional attacks here, so just keep at it until you win.

With another Spirit obtained, it's off to another area to fight another boss. If you have all of them, then you can make your way to the large door in the Willow's End for the final showdown. We have more guides readily prepared below that cover all sorts of things, from the locations of life and energy cell fragments, builds for Ori's skills, and tips for boss fights and chase sequences.