You've done everything you can in Ori And The Will Of The Wisps except bringing the Spirits collected up to this point to the Spirit Willow. But there's a nasty surprise waiting for you when you get there. The giant owl that hurt your friend and who has been hunting you the entire game is now here to stop you from reaching the Spirit Willow.

Ori And The Will Of The Wisps Shriek guide

This is it: the final boss guide for Ori And The Will Of The Wisps. You can watch the video above for the full Shriek boss fight, or read on for word-based tips for how to defeat her. There's no real weapon or skill recommendation here as you'll likely have tons of health and energy to use up. I would say that the ability "launch" is mandatory for two sections of this fight, so keep that one in your current build.

The first phase of this boss battle isn't too difficult compared to what's to come. She has a variety of attacks but they're all easily avoided for the most part. This is what Shriek can do:

Eventually, Shriek will fly around the tree and strike the ground hard. Everything is disintegrating, so it's time to run. 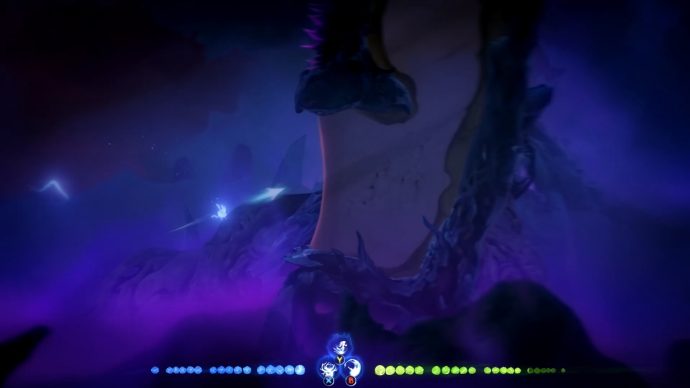 One thing to keep in mind as everything is crumbling beneath Ori's feet is that you have to equip the launch skill. For this section, it's mandatory to make a lot of the gaps that appear that you need to jump across. If it's not equipped, get it on Ori right now. Here are the steps you need to take to get across.

Shriek will constantly try to attack you but don't worry if she hits. It does a very small amount of damage. Just keep going until you reach the end.

Having chased you down, Shriek decides to get on the offensive once more. She'll lose her peg-leg attack, but gain a bunch more of them that are devastating in their own right. Here are all of the new attacks:

Damage boosting from the scream attack at ground level still gives you a good opportunity to dish out a lot of damage, so I highly recommend that. You can always regenerate if you need to. You'll know you're in the last phase of the fight when the health bar briefly disappears. 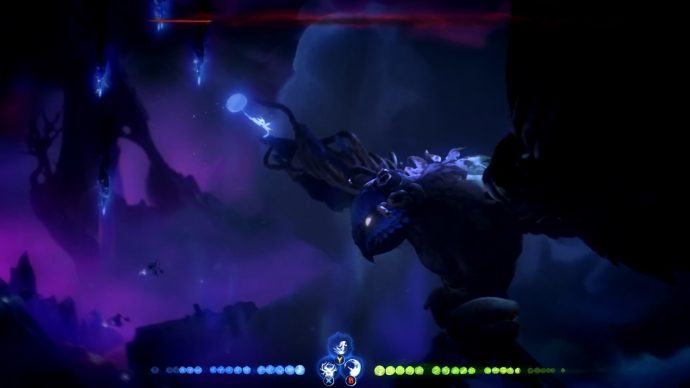 By far, this is the most difficult part of the boss fight and it's purely because there's no solid ground. Shriek will begin raining projectiles that will now never end, before slamming herself into the ground to destroy the platforms. You will need to heal before the platforms are destroyed, so do so as she's screaming in the background.

You'll need to balance using the bash ability to flit around like a persistent flying bug dodging a butterfly net. Aside from this, she'll just dart around with the areas she comes from getting darker before she attacks. If you ever drop into the pit below, you'll need to restart from just before Shriek flies into the background at the beginning of this phase. She'll mostly settle on the right side of the screen when catching her breath, leaving you an opportunity to get some hits in.

With enough hits, she'll be sent crashing back down to earth and you will be victorious.

Congratulations, you have defeated the final boss and completed the game. Now, if you want to fully complete the game and get all the collectables, we have more guides readily prepared below that cover the locations of life and energy cell fragments, Gorlek Ores, and every other collectable found in Ori And The Will Of The Wisps.

Ori And The Will Of The Wisps bosses