There are lots of secrets within Ori And The Will Of The Wisps, but none are more fascinating than the rumour you get about the Midnight Burrows. This hidden area has an entire dungeon locked behind some flowers you ring like bells. But what order do you ring them?

Where are the Midnight Burrows?

You will first learn about this area in a rumour given to you by one of the many critters in the game, but you can go here before learning about it. It's accessed by heading to the south-west of Inkwater Depths.

You won't be able to get too far without the bash or dash abilities that are unlocked relatively early on, so make sure you get that before journeying back here. Our Ori And The Will Of The Wisps Spirit Shard locations has details on what those abilities do and why they might be useful for navigating this area.

How to solve the first Midnight Burrows bell puzzle

When you do eventually get to the Midnight Burrows, you're presented with three bells. These bells must be rung in a specific order to unlock the first of the two doors you must open to progress further. But how do you open it?

Did you notice something strange in the background near Tokk as you enter the area for the first time? If not, I highly suggest you look at the area circled in the image below. 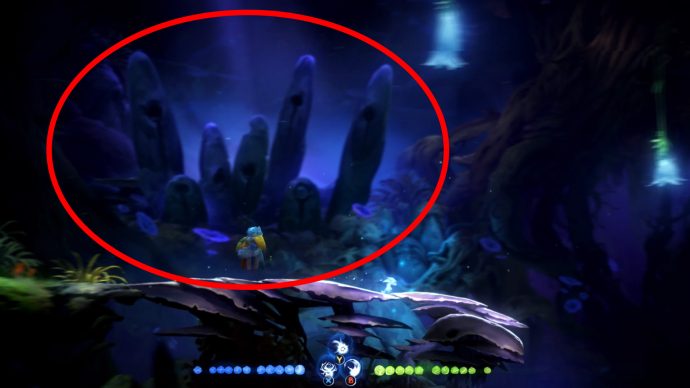 These stones are the key to unlocking the first door, but you'll need to interpret them into a sequence. See how some of the stones are higher than others? This refers to the height of the bell flowers to the right. You will then need to use the bash ability to ring the bells in the correct order. Don't worry if you drop to the floor as it won't break the sequence.

When you enter the sequence, the branch below will retract, revealing an entire area below you. I highly recommend that if you do venture downwards that you take a detour to the left as you reach the bottom, as there is a Spirit Well here.

How to solve the second Midnight Burrows bell puzzle

You may have noticed that there is a second door to the right of the bell puzzle area. This houses a secret item that you are going to want, but you will need to do some work to access it. It's worth stating again that finding this item is entirely optional.

After unlocking the first door, you need to venture inside, avoiding all the traps and defeating enemies until you reach a chamber with an ancient tablet at the end. This tablet has the second sequence on it, but there's a catch. Heading back to the room with the bells, talking to Tokk will give you the answer.

The sequence written on the tablet is backwards.

Upon learning this, or if you want to bypass some dungeon crawling and want the reward on the other side of the door, you can go ahead and input the following sequence by ringing the bells:

Unlocking this door will grant you access to a small chamber with a core ability tree inside. This unlocks the Ancestral Light ability, which grants all attacks 25% more damage. It's worth seeking out.

And that is how you unlock the doors in the Midnight Burrows. With your newly obtained ability, you'll be packing a much bigger punch than before. We have a bunch of other guides readily prepared below that cover all sorts of things, from the locations of life and energy cell fragments, builds for Ori's skills, and tips for boss fight/chase sequence.