The Division 2 is heading back to the flaming bin-lined streets of the Big Apple this week with the launch of its brand-new expansion, Warlords of New York. Swapping the sunny sights of Washington DC for the now equally sweltering-looking streets of lower Manhattan, The Division 2: Warlords of New York is a great excuse to jump back into Ubisoft’s giant open world looter shooter – and what better way to make sure you’re fighting fit for tomorrow’s big release than by having a gander at my freshly updated The Division 2 PC performance guide?

Below, you’ll find everything you need in order to get the best performance from The Division 2, including what you need to hit that all-important 60fps at 1080p, 1440p and 4K on all of todays best graphics cards, and the areas where you can cut a few corners if you find your GPU’s starting to struggle. I’ve added loads of new graphics cards to my Division 2 PC performance guide since I first put it together last year, bringing it bang up to date for 2020. So whether you’re jumping into the game for the first time or picking up where you left off last year, here’s how to get The Division 2 and Warlords of New York running like a well-oiled machine on PC.

The good news is that The Division 2 runs extremely well for the most part, and you don’t need a super powerful GPU to hit that coveted 60fps mark. Indeed, Ubisoft’s recommended PC requirements for 60fps at 1080p only state you need an Nvidia GTX 970 or an AMD RX 480, which are both pretty old cards these days. As a result, you shouldn’t have too much trouble getting The Division 2 to run smoothly on your PC, but there are still a number of things you can do to help improve your PC’s graphics performance if you find it’s getting a bit much, which I’ve listed below.

The Division 2 PC performance: How to get the best settings

The aim of this Division 2 PC graphics test is to get the game running at 60fps at 1920×1080, 2560×1440 and 4K where possible. In most cases, it wasn’t too difficult to get running on decent quality settings, and you can see the results of how each card fared in its internal benchmark below.

The game’s built-in benchmark tool swoops across a variety of scenes taking place outside on the gun-ridden streets of Washington DC. This spits out an average frame rate figure at the end of the benchmark, and I found it was pretty bang-on when I compared it to the in-game frame rate during a normal session – at least when I was running about outside. Indoors, the frame rate was often much higher, as you’re not having to deal with all those lush environmental effects. 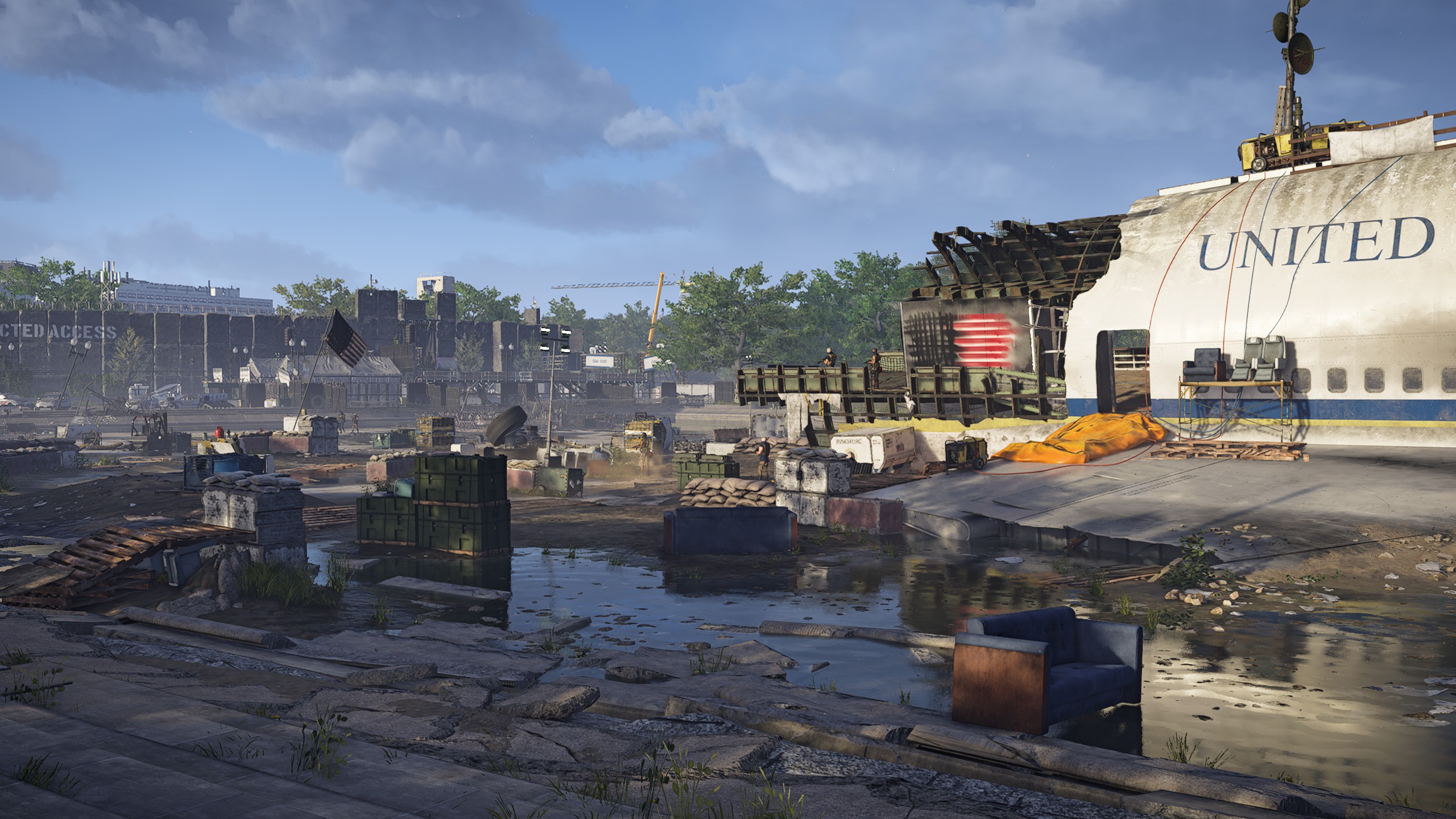 Still, when so much of the game takes place on the streets, whether it’s running between objectives or engaging in small firefights and control point skirmishes, it’s important to have 60fps as a baseline here. If you do find the frame rate chugging a bit, though, here’s how you can squeeze an extra 15fps out of it with just a couple of settings tweaks.

To find The Division 2’s graphics settings, go to the Graphics tab in the Settings menu. Here, you’ll find dozens of individual graphics options you can tweak, from the quality level of the terrain right down to the geometric complexity of in-game objects.

One handy thing to try is to drop the Resolution Scale down to 85%. This effectively lowers the in-game resolution a bit and upscales it to your desired resolution, such as 1920×1080 or 2560×1440, while massively increasing performance. I tried it with a 6GB GTX 1060 on Ultra settings at 2560×1440, and whereas before I was only getting an average of around 39fps in its internal benchmark tool with the resolution scale on 100%, I managed to bump this up to 48fps by changing it down to 85%. I couldn’t really see any appreciable drop in sharpness, either, so this should definitely be your first port of call if you need an easy, instant speed boost. 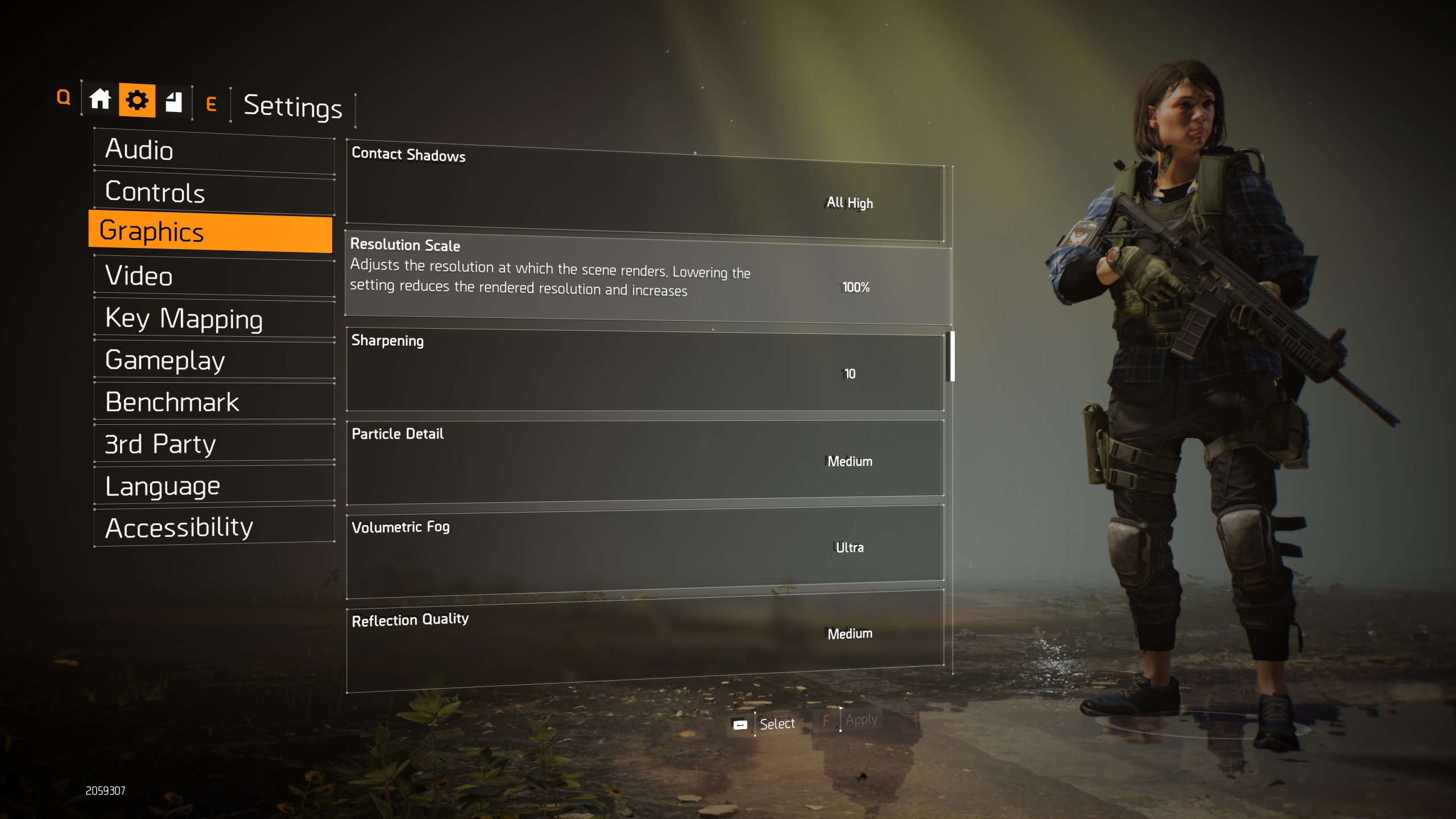 Another reasonably big graphics drain is Volumetric Fog. Now I know some people can be highly attached to the quality of their rendered fog, but whacking this down to either Medium or Low can claw back some vital extra frames. Taking my GTX 1060 again as an example, switching from Ultra volumetric fog at 2560×1440 down to Medium saw my average frame rate grow up another 4fps (taking it up to 43fps) while Low pushed it another frame up to 44fps. I know 5fps isn’t massive in the grand scheme of things, but combine that with an 85% resolution scale and I was able to get an average of 54fps – which is a damn sight better than 39fps!

Meanwhile, if you’re finding the frame rate is swinging violently from one end of the spectrum to another, then you’ll probably want to enable The Division 2’s Frame Rate Limit option. This is slightly different to just switching on V-Sync, for while V-Sync will cap your frame rate at the maximum refresh rate of your monitor, the frame rate limit lets you cap it anywhere from 20fps right up to 200fps in increments of 5fps. It should also get rid of any unwanted jitter while aiming and shooting, too, according to Ubisoft. So if you don’t want to keep veering between 30-60fps, for example, you could set a limit of 45fps, or even lock it at 30fps if you really wanted to be on the safe side.

Otherwise, adjusting individual settings won’t really bring about a huge amount of change unless you drop everything down by selecting a lower preset. I tried lowering the water quality, ambient occlusion, terrain quality and even the level of object detail one by one, but no single setting apart from the ones I’ve already described above really made a dent on that average frame rate.

Nevertheless, getting back an extra 15fps from the tips I’ve described above is still a pretty good way to help give your PC a bit of a boost, especially if your graphics card’s default performance isn’t quite as high as you’d like. To see how they all fared, you can either click the page links below, or head back up the page and click the links for the card you want to read about.

While you’re here, make sure you also check out our guides team’s extensive The Division 2 guide for all your essential tips and tricks on how to get ahead in the game, including: